One of the main reasons people want to have a fish tank is that they look really good wherever you put them. It’s like a moving painting, and it’s no wonder that in the old days the aquarium screensaver was so popular. They were just relaxing to look at, and sometimes they can be so fascinating.

But the effect isn’t all that great when you’ve got a cloudy fish tank.

UPDATE: CHECK OUT MY FAVORITE WATER CLARIFIER ON AMAZON

There are many possible reasons for getting cloudy water in your fish tank, and for some situations, it may be best to use an aquarium clarifier so you end up with a clear water aquarium.

Why Is My Fish Tank Water Cloudy?

This is a very common question for many beginner aquarium owners, and there’s really no single right answer every time. One possible reason is that you may overlook is that maybe you have a very colorful piece of decoration or equipment in your aquarium. Unfortunately, the color of this equipment may leak into the water which can turn the water cloudy.

You may have a problem with algae if the color of the water takes on a greenish tinge. It’s probably a bacterial problem if it seems like you’re looking through frosted glass. These bacteria thrive when you have lots of food that the fish don’t eat, as this extra food feed the bacteria instead. Sometimes even the microscopic bits of uneaten food are enough for the bacteria to thrive.

If your water in the fish tank looks brownish or grayish, then the tank may simply be dirty. You may even have a problem with your filtration system.

What is a Water Clarifier?

Stopping the cloudiness from occurring requires that you identify the real cause of the cloudiness in the first place. But often when the water is already cloudy, it may take several days for the water to clear even if you fix the problem correctly.

But sometimes it’s not a good idea to wait it out, especially when getting clear water takes too long. It’s not just that the sight of the cloudy water is unattractive, which obviously defeats the purpose of having an aquarium in the first place. But it can also be very dangerous for your fish, which can be a very serious problem indeed if you bought a lot of expensive fish. That’s a lot of money down the drain, and that’s true in an almost literal sense when you think about it.

What you can do to accelerate the process is to use a water clarifier instead of just waiting it out. A water clarifier works by causing chemical changes in the particles that make the water cloudy. These particles are made to clump together so that they either become too heavy and settle to the bottom of the tank or become large enough to be trapped by the filter.

With the use of the best aquarium water clarifier you can find, clearing up the cloudiness can take a few hours or a few days instead of many days or several weeks.

Using a water clarifier can definitely help, but you may want to work in preventing the cloudiness issue in the first place.

Still, it’s always possible you’ll get some cloudy water every now and then.

Here are some water clarifier brands you can choose from:

This one works effectively, but you must take care not to go over the recommended dosage. And it also works only with filtered tanks, since it causes the clumps of particles to get caught in the filter. And it’s also only for fresh water tanks.

A 1.25-ounce container can treat up to 370 gallons. When you put it in, it actually becomes even cloudier at first.

But it eventually clears up the water in the end. It will take about 24 to 36 hours, but it’ll get there.

This US-made water clarifier is meant for fresh water tanks, but it may also be used for salt water tanks in case of emergency.

It clumps up the water particles that cloud the water so they’re easier to filter out or they settle to the bottom of the tank.

This is about 3 times as expensive as the Aqueon. That’s because it promises a lot.

It can assimilate both organic and inorganic pollutants. It can stimulate microbial activity.

It can correct any nutrient imbalance and it’s safe for all types of plants, fish, and other aquarium denizens. 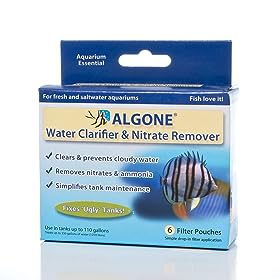 It even boosts the level of the dissolved oxygen content.

With this, you get 6 pouches (1.6 ounces total), and that’s enough to treat as much as 330 gallons. You just put the pouch in the filter tank.

Personally, I feel safe using any of these products.

But I’ll recommend that you try out the Aqueon first, as it is more affordable and it seems to work for a lot more people.

You can then try the Algone if it doesn’t work. I’m a bit wary of the API Accu-Clear, since I don’t want my fish to die just because I use too much clarifier.