So the time has come, your underwater friend has met its end. Every fishkeeper dreads the day they lose one of their beloved fish. It happens to us all. However, one question that we never seem to ask is, “What do I do with the body?”.

We’ve all been told to “just flush it”, everyone does it, but is this the best way to handle the situation? 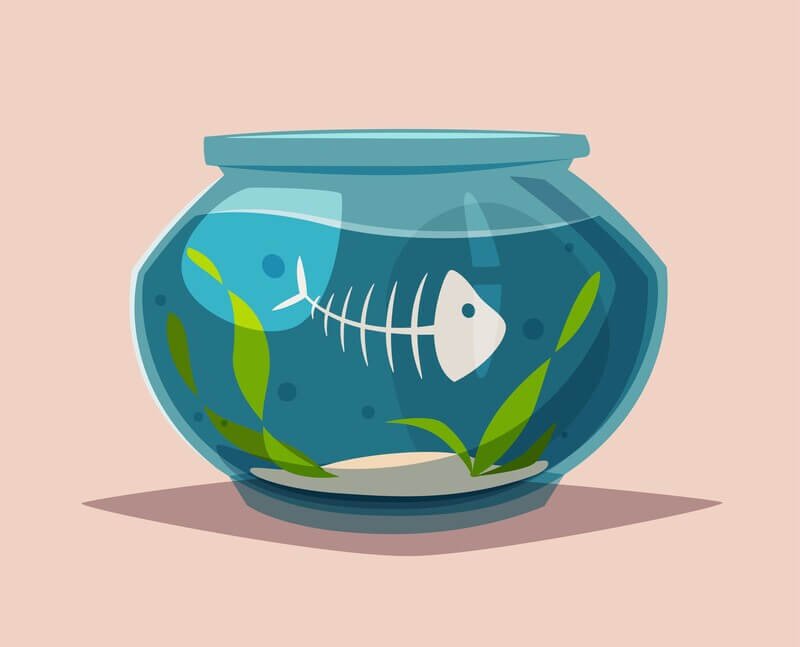 Although it is a quick means of disposal, flushing a fish down the toilet might not be as appropriate as implied. Your problem may be whisked away at the push of a button, but that doesn't mean that it won't become a problem for something else down the line.

In this article, I will explain the most ethical ways to lay your fish to rest.

First Things First: Protecting the Other Fish in Your Aquarium

Fish begin to decompose quickly after death. This decomposition process releases toxic compounds into the water, including ammonia. These toxins can seriously harm other fish that may be in the tank and cause them to fall ill. Not to mention that if a fish died from a contagious illness, that too can spread to your other fish!

Protect the health of the rest of your fish by removing the deceased specimen as quickly as possible.

Remember! After handling a fish that has passed on, always sanitize any equipment (ie. nets) before using them on other fish!

If you are not quite ready to bury yet, you can start by placing the corpse in an airtight bag and freezing it. This method will stop the decomposition process, giving you however much time you need to ready yourself for burial.

When burying your fish, it is best to remove any plastic or non-degradable container you have put them in. These products, especially plastics, are harmful to the environment. They take a large amount of time to break down and are also observed to leak toxic chemicals.

To learn more about the dangers of plastic pollution have a look here.

Decomposing creatures are a great, natural fertilizer. Various nutrients released during the decomposition process provide all-important sustenance to surrounding vegetation. It’s also good for the fish. As even in death, it can nourish and provide for the living. Its death will not be in vain!

Most people who partake in burial pick a spot in their backyard as a final resting place. Burying them under trees, bushes, and flowers are an easy way to mark their grave and feed your plants. Homemade grave markers are a popular choice and provide a simple way to grieve and show respect to your pet.

You can also buy a new plant to use as a grave marker where your fish has been laid to rest. Thus further beautifying your land, and further helping out Mother Earth. Don't be afraid to get creative, death doesn't have to be all bad! Celebrate your little buddy's life by respecting them in death.

There are so many ways to bury your pet and so many ways for you to personalize and pay tribute to them. If you live in an apartment, or otherwise do not have access to land, do not fret! There is another way to bury your fish and make sure its body doesn't go to waste.

Houseplants offer another resting place. You might be thinking, "Oh, gross. I don't want my fish decomposing in my house. What if it smells?" However, this method of disposal is more sanitary than it seems. If the pot is big enough, the soil deep enough, and the fish small enough, there will be no smell. The plant will absorb all the nutrients from the remains, a primary example of recycling.

This form of burial ensures that your fish has not died in vain. If you have a favorite potted plant, your recently departed fish can help sustain its life and let it grow. Houseplants are also transportable. Meaning that even if you move across the country, the memory of your fish will always be with you.

Whisked Away in the Wastebasket

If burial is not the method for you, there is another, less conventional, way of disposal. I, personally, find this process more difficult than burying. Yet, throwing out the body in the trash is an available option. If you do choose this method it is important to wrap the body up in biodegradable material.

Wrapping the body, or placing it in a cardboard box, prevents any sanitation workers from coming into contact with the fish. It also lessens the smell. Again, this way of removal seems a bit weird, but it is much better for the environment than flushing.

The last ethical way of disposal is cremation. Burning the body destroys all communicable diseases. Doing your own cremation may not be safe, or possible if you do not have the proper equipment or place to do such a thing. However, there are many pet crematoriums. Talk to your vet about the possibility of cremation. They will lead you in the right direction.

Flushing Your Fish: How it Can Impact the Environment

I’ve mentioned a few times now that flushing a fish is a no go, but I haven’t yet explained why. Flushing won’t cause any damage to your plumbing. Though once a fish leaves your property in the sewage system, it will cause harm to local waterways and wildlife.

You see, not all drains lead to a septic plant. Some drain out into oceans and rivers. When you add a captive-raised fish to a new ecosystem, you expose wild species to harmful diseases. This can wreak havoc on wild fish populations. The immune systems of wild fish aren’t tuned to fight off ailments that our captive fish regularly come into contact with.

Diseases like ich and other parasitic infections can easily destroy an entire ecosystem. Native fish that are not accustomed to the diseases of captive species can die once exposed. This is why burial is the best option. It protects other creatures from exposure to harmful diseases. Overall, burial is a win-win.

The Impact of Improper Disposal of Live Fish

One more topic that I’d like to discuss is the improper release of live fish into the wild. I want to start by saying there are many ways to dispose of your animal other than dumping. A suitable option for relocating an unwanted animal is simply giving it away.

Most local fish stores will happily take in your unwanted fish. Online options like Craigslist or local fishkeeping groups are packed with people willing to adopt a free fish. There is no reason to risk the lives of our wild populations. Do the right thing, do not release your fish into the wild.

Improperly releasing fish into the wild can also be harmful to you. In countries all over the world, it is illegal to release captive fish into the wild. Even in some U.S. States, the process of illegal dumping can result in criminal charges. Like flushing, releasing live fish into an environment that is not their own can harm native fish. Disease is likely to spread, and the invasive species can inundate the ecosystem.

According to Hoover, Killgore, and Cofrancesco of the Aquatic Nuisance Species Research Program, “The distinctive feeding and reproductive behaviors of suckermouth catfishes, coupled with large size and high population densities, constitute significant threats to native fish communities and to aquatic habitats of the United States” (source).

All over the world, there are reports of people dumping their unwanted plecos in various waterways. These fish are outcompeting the wild fish for food. Thus causing the population of those wild fish to dwindle. In the U.S. we are already facing the fallout that comes from the improper release of plecostomus. These armored catfish are voracious eaters. They are reproducing at an alarming rate, and native fish are struggling to compete.

Even more prolific than plecos, goldfish and other species of carp are quickly becoming one of the most destructive invasive species. Their hardiness gives them the ability to adapt to new environments quickly. Once a hearty population of goldfish is established, they use up every resource, not leaving much behind for the native fish.

Here’s a helpful video that discusses the growing goldfish invasion.

As sad as pet death might be, how you handle the loss is just as important as how you handled their life. Your fish may have lost its life, but that doesn't mean their story has to end there. Even in death, your pet can still benefit other life.

Whether you are discarding live or deceased fish, how you do so determines the impact on surrounding wildlife. Honor your fish's life, and the life you shared with it! Give your fish an ethical and proper resting place!

Do you have any questions, comments, or concerns? Send ‘em our way and we’ll get back to you! All feedback is welcome and appreciated!

Navigation
First Things First: Protecting the Other Fish in Your Aquarium
Backyard Burial
Potted Plant Burial
Whisked Away in the Wastebasket
Cremation
Flushing Your Fish: How it Can Impact the Environment
Spreading Disease
The Impact of Improper Disposal of Live Fish
Closing Thoughts