Angelfish are some of the most popular and easily recognized tropical fish kept in home aquariums.

Not only are the shape and color of these fish stunning, but they are also hardy and simple to keep.

Whether or not you intend to breed your freshwater angelfish, you may wish to know how you can tell which ones are male or female. 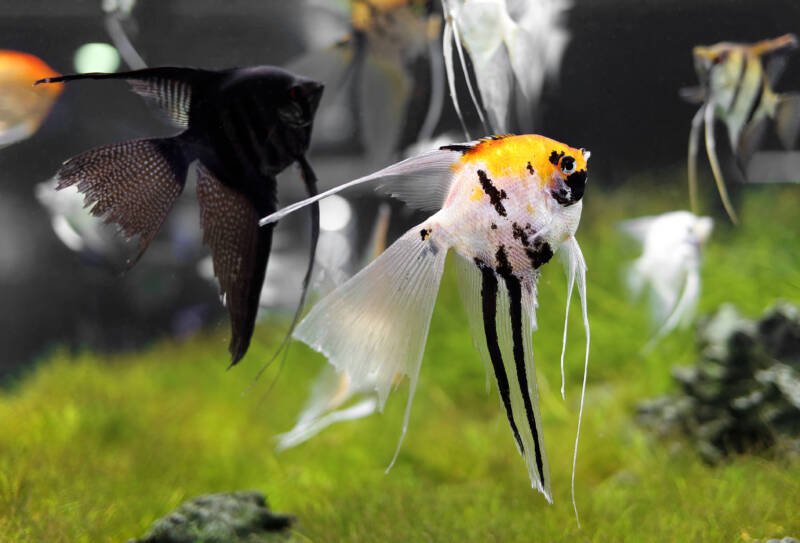 This can be a challenging task, as the differences are subtle and can be easy to misjudge, even for experienced aquarists.

Below, we discuss the commonly used methods for sexing angelfish.

Remember that none of these indicators will work prior to the fish reaching maturity.

Before that time, it is nearly impossible to distinguish males from females. Even then, different breeds, shapes, and genetics may still trip you up.

The following physical differences between males and females begin to show when your fish are around six to seven months of age (or older for some wild species).

Start by taking an overall look at your fish’s body shape.

Males tend to be larger in size and grow faster than females, although this can vary based on diet, environment, and other factors, such as genetics.

The male angelfish will have a rounded, circular body. The female will be smaller and will have a slightly angular body, especially when you look at the belly line.

Look at the section of your angelfish’s forehead from the eyes back to the dorsal fin. Males will display a modest nuchal hump, or an outward rounding of the forehead in this region.

Females will have no such hump. Their forehead will have a gentle backward slope.

Male and female angelfish differ slightly in the shapes of their dorsal and ventral fins.

In female angelfish, this tube is called the ovipositor and will be broad, cylindrical, and stout.

The male’s will be thinner and pointed, much like the tip of a pencil.

Using the appearance of the genital papillae to determine your fish’s sex is more reliable when the fish are actively breeding.

For females, you may not see the breeding tube until she is full of eggs and ready to spawn.

Of course, one way to tell if your angelfish is male or female is the observation of your fish’s abdomen prior to spawning.

A swollen belly will indicate that you have a female full of eggs and ready to breed. At this point, angelfish eggs and fry may be in your future. 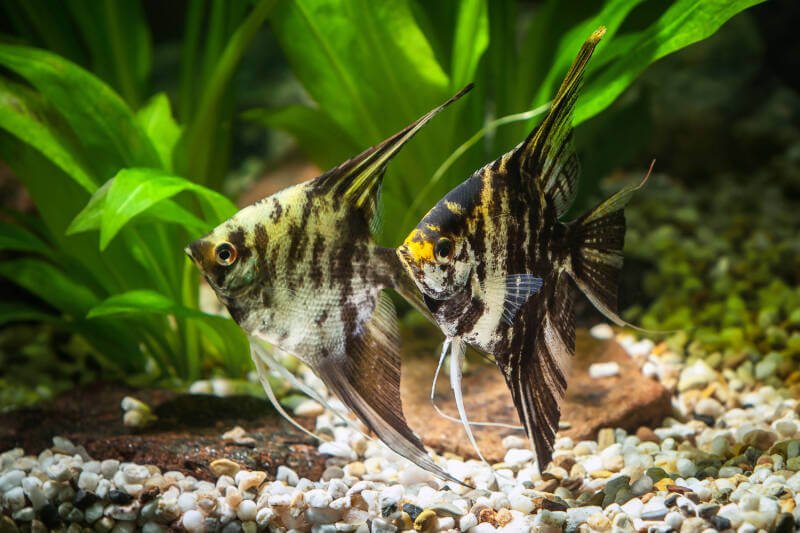 Aside from physical characteristics, there are also slight differences in male and female angelfish behavior.

Males will be territorial, especially during times of breeding. The aggression a male angelfish shows can be directed toward others of its kind or against other fish species.

When actively breeding, you may see the male angelfish chasing the female.

This is not typically a sign of aggression but can help you determine the sex of the angelfish. Chasing in association with conflict may indicate two territorial males.

When male angelfish swim, their mouth is usually in line horizontally with center point of their tail.

For females, they tend to swim with their mouths slightly above this horizontal line.

Pairing angelfish for breeding can be hit or miss. Even if you accurately determine the sexes, placing a random male and female in the same tank is not necessarily going to succeed.

Whichever path you pursue, be patient and allow time to let the process play out.

To encourage spawning, make sure the tank environment is well maintained.

Less-than-ideal conditions can discourage your fish from spawning due to the stressors placed on them by, for example, poor water conditions, inadequate diet, small tank size, etc.

Consider the following if you are looking to breed your angelfish.

Angelfish need a territory to call their own, especially when breeding. Too small of a tank will raise their stress levels because they are constantly defending their spot against others.

A 20-gallon tank is the minimum size for a breeding pair, and even that might prove too small if breeding is successful and the fry mature in six months.

Water conditions are an important part of your everyday routine when caring for angelfish.

When you are breeding them, attention to maintaining stable conditions is even more important as fluctuations can cause stress and interrupt the breeding cycle.

Invest in quality equipment to maintain these conditions. Make sure your heater and filter are both adequate for your tank size. Buy a water testing kit and test your water weekly.

Perform weekly water changes to keep your tank in top shape. You can get by with a 10 to 20% change for most setups.

Angelfish prefer lighting that closely resembles natural sunlight as anything harsh will cause stress. Keep the lights on for between eight to 12 hours daily.

If you are successful in having a bonded angelfish pair, they may display unique spawning behaviors.

Angelfish that are preparing to spawn will remove themselves from the group to prepare a nesting site. They will clean and vigorously defend this area from other fish.

When the female is ready, you will see her abdomen swollen with eggs, and she will hover near her chosen spawning site.

She will lay anywhere from 100 to 1,000 eggs in rows while the male trails behind, fertilizing them.

Angelfish are good parents. They will fan the eggs to aerate them and remove any that are unfertilized or decaying.

Once the eggs hatch, the larvae remain with and gain nutrients from their egg sacs.

The angelfish parents will continue to watch over their young as they become free-swimming fry, which takes about a week. After that, they will defend their fry for about a month.

Can angelfish eat their fry?

Yes, if they become stressed by other species in the tank, angelfish can consume their young.

If this is a concern, then transfer your breeding pair to a separate tank to ensure the best survival rate for the fry.

Although it can be challenging to determine the sex of angelfish, that does not stop enthusiasts from trying. Nor should it stop you, especially if you are interested in breeding them.

Remember the basics of how to tell a male from a female angelfish, such as body and head shape, fin shape, and breeding tube structure.

If you plan to breed your fish, know the basics of letting them form pairs, how to prepare a spawning environment, and how to best care for the fry.

We would love to hear from you! Have you successfully bred your angelfish? Were you able to tell your fish’s sex before they spawned?