The Maroon clownfish is a popular choice among aquarist’s for their reef tanks because of their unique appearance. They’re low maintenance, stunning to look at, and quite feisty. What’s not to love?

Want to know if a maroon clownfish will be a good addition to your tank? Keep reading to find out if your tank is ideal for housing a maroon. 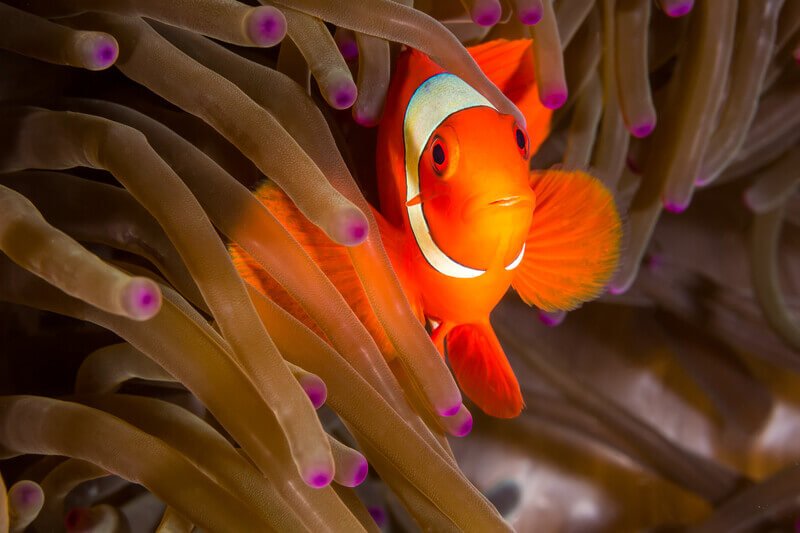 The spine-cheek anemone fish is found in the Indo-Pacific, Western Indonesia, Taiwan, and the Great Barrier Reef.

You’ll find them hanging out in shallow reefs with warm, tropical water between 74-82F degrees.

If you see one in nature, you’ll almost always see them hosting an anemone. An anemone is an animal closely related to the jellyfish.

Anemones and clownfish, no matter the species, have a special relationship. In fact, it is one of the world’s most iconic symbolic relationships.

Anemones have tentacles that sting their prey. Clownfish have something that other saltwater fish don’t have, a protective slime coat. The slime coat protects them from the anemones deadly sting, making it a safe place to live. Anemones protect clownfish from predators, and clownfish feed the animal in return. If other fish get stung by an anemone, it can result in serious injuries and/or death, so they stay away.

Maroon clownfish are the most aggressive species of clownfish.

They are known for their bold, feisty behavior in the aquarium trade. They are very territorial, especially towards their own species. Maroon clownfish do not tolerate other species of clownfish. If you try to put them together in a tank, the maroon will most likely kill the other fish.

When trying to pair a maroon with a mate, there needs to be an obvious size difference. I was able to successfully pair two maroons with a female that is double the size of the male. The female is about 6” and the male is 3”. I got them on the same day, but they were not in the same tank at the store. I put them in my tank at the same time, and they paired instantly.

I was not expecting it to go that well and was a bit surprised. It may have gone differently if my female was already established in the tank. She may not have accepted him so quickly, but you never really know with these fish.

Maroons aren’t only feisty towards other fish, they might take a nip at you, too. Occasionally, my female will try to attack my hand whilst in the tank. Once again, she’s very territorial and doesn’t like my hand in her space. It doesn’t hurt, but it is startling. Just be aware of that so you don’t get too startled.

Maroon clownfish may not be the friendliest fish in the reef, but they are worthy of our admiration.

Clownfish don’t need much to be happy. They’re a great fish for a beginner in the hobby.

If you aren’t able to have an anemone, that’s fine. Just make sure you have plenty of rock and structure so they can find a safe area to hang around.

If you are interested in keeping an anemone, your maroon clownfish has a preference. Bubble tip anemones are their favorite to host. In my opinion, bubble tips are also the most beautiful anemone. It’s a win-win combination. They are very easy to care for and to keep happy. They need a strong light and some good flow to thrive. I use a Kessil A360WE-Tuna Blue light and my anemones love it.

Maroon clownfish aren’t high maintenance, and I found they can tolerate a lot. I do a water change on my tank every few weeks. I always test my water before I change it to know what my levels are at. Something I have learned when keeping fish – less is more. If my parameters are perfect and my fish are doing great, I likely won’t change the water then. Keep an eye on your water quality and keep your nitrates low.

It’s also a good idea to have a lid on a tank with a maroon. Mine get excited when I feed, they actually jump out of the water on occasion; so just keep an eye on them while feeding.

Like I mentioned before, maroons will not tolerate a different species of clownfish. If you have a maroon that is already established in your tank, do not introduce a fish that is smaller than them. It is highly likely the maroon will not accept that fish and eliminate it.

Maroons do well in a mixed reef tank. I have seen many maroon clownfish in larger tanks in stores with a lot of different fish. Like I said before, try to add bigger fish than the maroon, but keep an eye on them when you do. Each fish and situation is different, so just be aware and observative.

Maroon clownfish, and clownfish in general, are easy to please when it comes to their diet. Clownfish are omnivorous. In the wild, they eat copepods, amphipods, brine shrimp, algae, etc.

A good quality pellet food is really all they need to stay healthy in your aquarium. I feed my clownfish TDO pellets once a day. My maroon pair started to spawn after I switched their food to the TDO pellets from Ocean Nutrition. They really love it. It’s very nutrient rich and satisfies their bodies needs. I like to give them an occasional treat of live foods such as gut loaded brine shrimp, which they appreciate.

You can feed your clownfish various other types of food. I have fed mine mysis shrimp, Fertility Frenzy, and Ocean Nutrition Formula One & Two. They enjoy them all.

TIP: If you’re feeding Fertility Frenzy, be careful. I have had a clownfish literally jump out of the tank for it — she loved it so much. She landed on the floor and unfortunately, she passed away overnight from the fall.

Maroon clownfish breed in captivity, which is very exciting for the hobby. I currently have a breeding pair of gold helmet maroons.

The tricky part of getting maroons to spawn, is finding a partner that they will accept. Maroons are picky when it comes to their partners. In order for them to accept their partner, they need to have a sizable difference. If they are the same size, they will kill each other in competition for the hierarchy.

Clownfish carry both female and male reproductive organs. The largest fish of the pair will develop female organs, and become the top of the hierarchy. The smaller one develops the male organs. It took about a year and a half for my mated pair to lay their first batch of eggs in the aquarium.

In the wild, if the female clownfish dies, the top breeding male transitions into a female. He will feed more, grow larger, and develop female reproductive organs. The next male on the hierarchy will then pair up with the new female, and continue to spawn. I have not heard of this happening in a home aquarium, though.

Maroon clownfish eggs typically hatch on the 7th or 8th night. I find that my pair prefers to lay their eggs on a rock. I’m trying to get them to lay on a ceramic flower pot next.

The first day that the eggs are laid, they are bright neon orange. The next few days, the eggs will grow a darker red. About 3 days before they hatch, the eggs will turn silver. The silver color comes from their eyes developing. The parents groom their eggs by eating algae and dead eggs to keep their clutch nice, clean, and healthy.

It is really interesting to watch them care for their eggs. Instinctive nature is a beautiful thing to watch in action.

Clownfish are susceptible to multiple diseases. The most common diseases are marine velvet, ich, swim bladder, and brooklynella. They are also prone to bacterial infections and other parasites.

If you notice the symptoms of these diseases quickly, there is a chance that you can save the fish. I like to keep multiple medications on hand in case of emergency.

When buying a new clownfish, look for nipped fins, ich, rapid breathing, and how they’re swimming. Clownfish swim pretty odd to begin with, so it may not be so obvious if one is sick. Needless to say, don’t buy a clownfish that is infected.

It is important to also quarantine new fish before you add them to an established system. Some people treat the fish regardless if they are sick or not. I think it is smart to do that, so I have taken that approach when I buy new fish. It’s an extra step of caution when introducing new fish to an established aquarium. If you don’t quarantine new fish, corals and inverts, you risk infecting your whole tank with disease.

Maroon clownfish are hardy. I have had a lot of fish over the years and unfortunately, haven’t been able to save most of them when they fell ill. However, I was able to save two of my maroons with the medication I had on hand. One had ich and the other developed marine velvet. After treating them with the appropriate medications, they are both healthy and well now.

Maroon clownfish are a gorgeous fish with striking colors and personalities. They are a constant reminder to the incredible beauty that lies within our oceans. It’s a privilege that we are able to observe and learn about them in our own aquariums. Along with their reputation of being the most aggressive being true, it is also true that they are the most sentient, aware, and intelligent of the designer clownfish.

So, what do you think? Will a spine-cheeked anemonefish be a good addition to your aquarium?