Sudden drops in temperature are especially stressful to fish. Low temperature inhibits the fish’s immune system and may lead to disease problems.

Aquarium fish often suffer from a parasitic ich outbreak after exposure to a temperature drop.

When tropical fish aquariums are too cool, several things happen.

First, the fish’s metabolism slows down. Because fish are cold-blooded, temperate plays a key role in their energy for growth and repair of damaged fins and skin.

Even worse, the fish’s immune system is inhibited. This means the fish won’t be able to fight off stress and disease problems.

When the fish’s immune system is weakened, it becomes susceptible to bacteria, fungus, and parasite problems.

Why Does a Nano Aquarium Need a Heater?

Aquarists with small tanks tend to forget their aquarium needs a heater.

Even though the nano tanks are smaller and limited for space, the water temperature still needs to be stabilized.

Water holds heat and is slow to lose heat and cool down. The larger the aquarium, the more stable the temperature.

Some people like to keep their home or office cooler than what the fish need. A heater will prevent temperature dips and keep the water temperature in the optimal range.

Nano aquariums don’t have room for large traditional aquarium heaters. In fact, you don’t need a big heater in a small aquarium.

Fortunately, there are a variety of small aquarium heaters designed especially for nano tanks.

We’ve looked at the most modern designs in nano aquarium heaters and evaluated the features of each brand. Our guide will help you select the right heater for your nano aquarium. 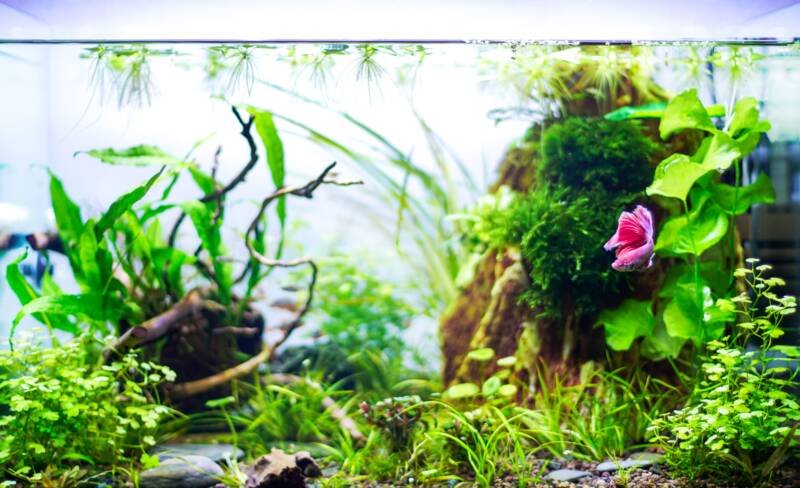 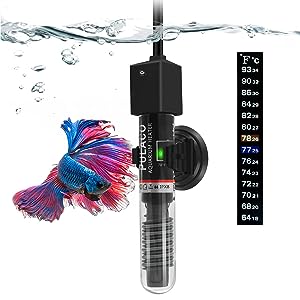 There is no temperature adjustment knob. Instead, the Pulaco uses a pre-set temperature rated to keep tanks up to 6 gallons at 78°F.

The heater has an LED light that is green when the heater is powered up and red when heating the water.

The heater attaches to the side of the tank with a suction cup and must be positioned vertically in the tank. 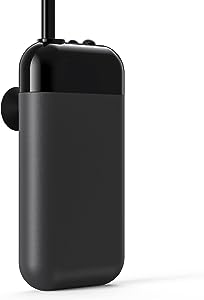 The Nicrew heater steps away from the traditional glass tube design.

The heating element is encased in a plastic polymer body. This makes the heater unbreakable.

It can be mounted inside the tank in any position using the two suction cups. The heater must be fully submerged. 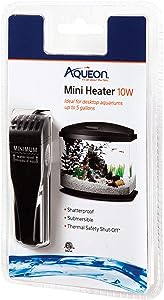 This submersible aquarium heater is very thin, measuring only 0.5 inches (13 mm) thick. The heating element is encased in a shatter-proof polymer.

Three models are available for tanks up to six gallons (20 l).

The Aqueon heater can be mounted vertically or horizontally. The 7.5-watt heater is rated for tanks up to three gallons (10 l).

The heater raises the water temperature about six degrees above room temperature. The thermostat cannot be adjusted.

The Aqueon Flat heater does not have LEDs to indicate when it is powered up or heating the water.

Fluval is one of the major aquarium equipment brands in the hobby.

The P- series heaters are encased in a shatter-proof polymer. Accidental falling rocks and big fish, like cichlids, won’t be able to break it.

The P-series come in three models:

The heater features a LED running light that glows red when powered on. The heater will keep the water temperature at 76-78°F (24-25.5°C).

If your room temperature is 12-degrees below this range, the manufacturer recommends using the next higher output heater.

The P series heaters can be used in freshwater and marine aquariums.

The heater attaches to the glass with a suction cup and can be placed in any position, if the heater is fully submerged. 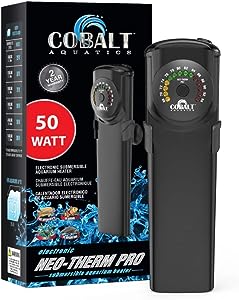 The Neo-Therm Pro aquarium heater is the most advanced in our line-up.

The heater design uses a flat polymer body and a large dial packed with LEDs that indicate the temperature setting, water temperature, and status of the heater.

While traditional heaters are either on or off, the Neo-Therm ramps power up or down to make gentle temperature adjustments. This saves energy and keeps the water temperature more stable.

The advanced electronics automatically monitor for overheating and shuts down the heater if there is a problem.

The slim design uses a reversible suction cup mount system, making it easy to install in the aquarium or a filter.

Apart from physical size, it is important to consider wattage when selecting heaters with pre-set temperatures.

If your room temperature runs about 10 degrees less than the pre-set temperature, the heater may not be able to maintain a stable temperature.

The PAULACO, Aqueon, and Nicrew heaters are best suited for small betta tanks in rooms with temperatures around 70F.

For nano aquariums of larger size, the Fluval P series offers a variety of wattages. For full control of the temperature setting along with advanced LED display and temperature control, the Neo-Therm heater is the way to go.

If you have any questions or comments, please leave them below.