Selecting a marine salt for your saltwater aquarium can be a confusing process.

There are many brands to choose from. There are also specialty marine salts marketed for specific types of marine life, like SPS and LPS corals.

We’ll take a look at the most popular marine salt mixes and provide a breakdown of their features. You’ll be able to make an informed decision about which salt is best for your marine aquarium.

What is marine salt?

When you mix your own saltwater, you’re creating synthetic seawater. That’s because the salt mix is a blend of individual salts, pH buffers, and trace elements.

Salts include potassium, sodium, calcium, chloride, and bicarbonates, to name a few. The synthetic chemicals are blended in a factory and packaged in bags and buckets.

Once properly dissolved in freshwater, the water is transformed into a balanced blend of the same salts found in the ocean.

Some companies use sodium chloride made from evaporated seawater. But you can’t dry out seawater, add water and have it dissolve properly.

So those marine mixes are made primarily from synthetic chemicals. It’s the only way to guarantee a consistent formula batch after batch.

How to dissolve marine salt?

How do I know my salinity is correct?

If the amount of salt added to the mixing container is incorrect, the salt concentration (salinity) will be too low or too high.

Start by adding the recommended amount listed on the package. Once the salt is dissolved, measure the salinity with a refractometer.

The goal is to make saltwater with a salinity of 35-36 ppt.

Should I use municipal water, well water, or reverse osmosis water?

Municipal and well water is generally considered risky for use in marine aquariums.

Nearly all saltwater aquarists use reverse osmosis for the aquariums. There are several reasons why:

What’s the difference between reef salt and regular salt mixes?

Reef salt is formulated with extra calcium. This helps when keeping reef-building LPS and SPS corals, clams, and coralline algae. Some brands increase other parameters like trace elements or alkalinity.

Regular marine salt is formulated to match the ocean’s salt content without extra calcium or trace elements. This is perfect for keeping fish-only aquariums.

But even some reef enthusiasts prefer regular marine mixes over the boosted reef types. That’s because they like to add their own calcium, magnesium, and alkalinity supplements based on their own testing and tank’s needs.

Can I use marine salt in a freshwater aquarium?

Marine salt mixes contain pH buffers that will increase the pH to around 8.4.

But for most freshwater tanks, you should use inexpensive “aquarium salt.” It may say “made from evaporated seawater,” but it won’t increase the pH or make the water harder by adding calcium and magnesium.

Which marine salt is the best? 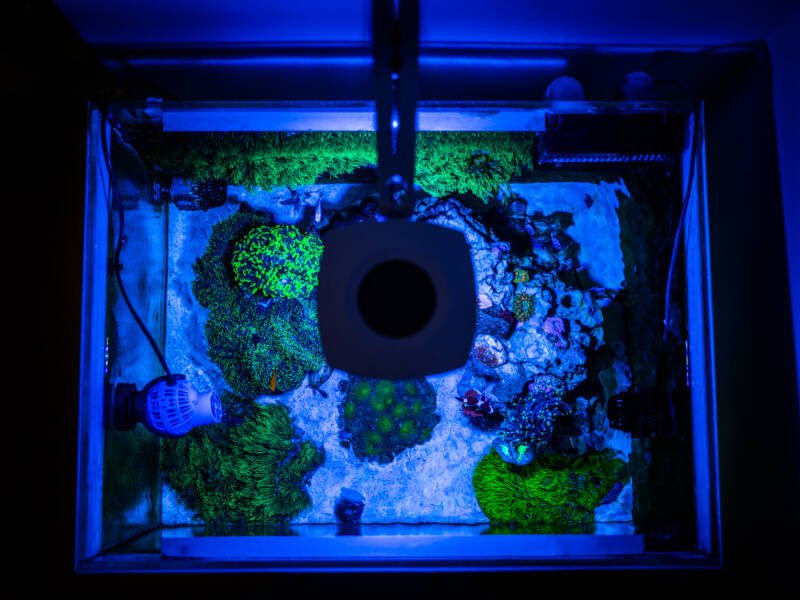 You’ll never find agreement among saltwater aquarists on which salt is best. There are many fine brands to choose from.

Here is a list of the most popular salt mixes to choose from: 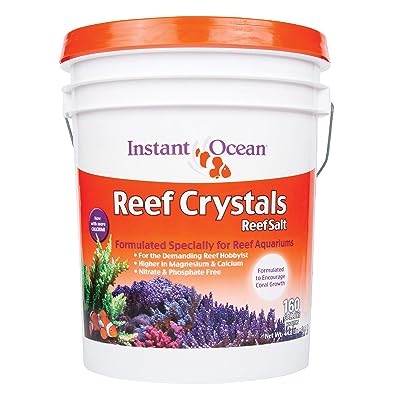 Instant Ocean Reef Salt was one of the first salt manufacturers to come out with a reef formula.

It contains extra calcium to encourage the growth of large and small polyp stony corals (LPS & SPS) as well as coralline algae. 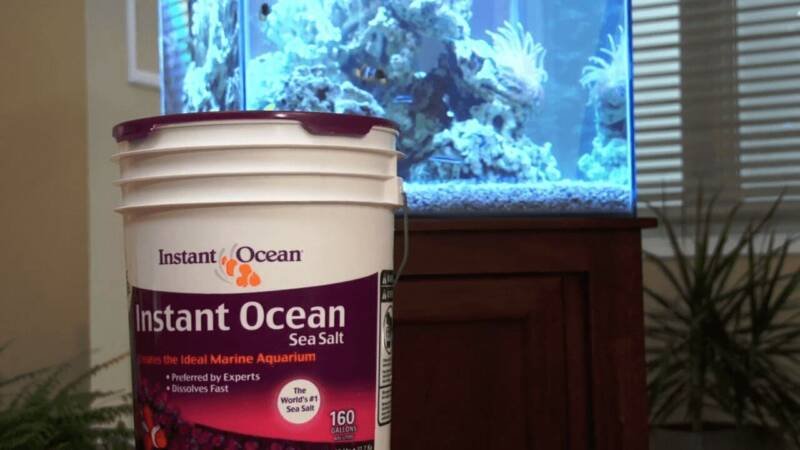 This salt mix was the first commercial seawater mix in the US and Canada. It’s been used for decades by public aquariums, laboratories, breeders, and aquarium shops worldwide.

Instant Ocean Sea Salt is nitrate and phosphate-free and can be used in any marine or reef aquarium. 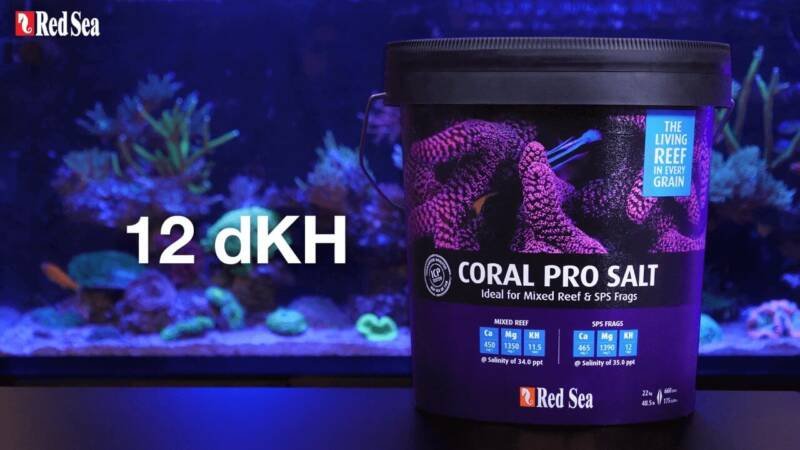 Red Sea is a well-known manufacturer of reef products.

They claim they’ve adjusted the ratio between calcium, magnesium, and carbonates for optimal coral growth. This causes accelerated growth of all soft, LPS, and SPS corals. 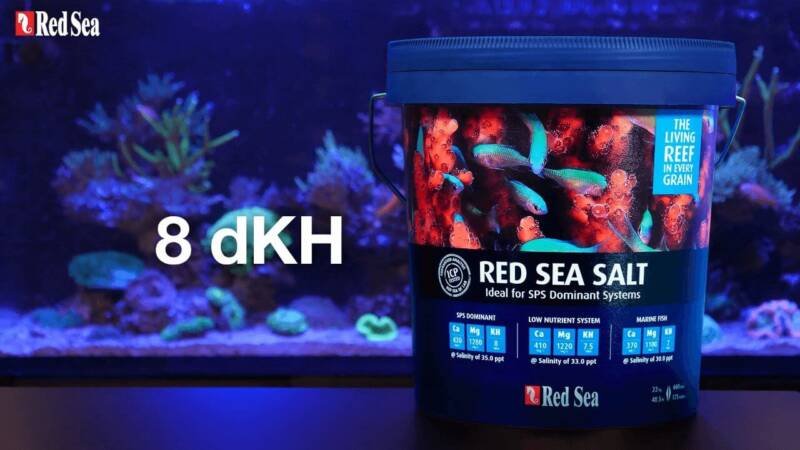 This salt is a basic salt blend with no extra elements. It’s perfect for fish-only and FOWLR tanks.

If you’ve got a reef and like to add your own supplements, this salt is perfect.

It’s nitrate and phosphate-free. The absence of excessive levels of heavy metals in Red Sea Salt eliminates the need for chemical binders that adversely affect the function of protein skimmers. 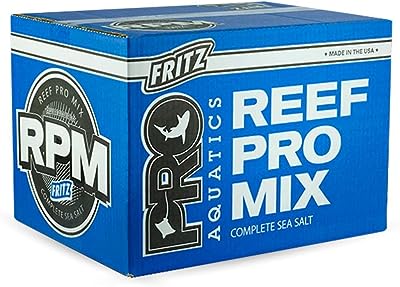 Fritz Aquatics is one of the founding companies in the aquarium hobby. Fritz is also active in the aquaculture industry.

Their RPM salt stands for Reef Pro Mix. This salt is formulated for use in all types of saltwater aquariums.

The salt blending equipment is used for the production of aquatic products, preventing contamination issues.

Aquaforest reef salt was created to support the company’s coral and fish farming operations in Poland. The company developed its own marine salt for their farms.

In 2011 the company began selling its formulations to the aquarium hobby under the Aquaforest brand.

The micronutrients and macronutrients contained in the formula fulfill the demand of corals for proper growth and pigmentation.

Aquaforest reef salt is suitable for any type of marine tank, including fish, FOWLR, and reef.

Aquaforest Probiotic salt contains the same high-quality salts plus beneficial bacteria that reduce nitrates and phosphates and prevent the growth of pathogenic bacteria in the marine aquarium.

It’s said to be for aquariums with fish and less delicate corals and invertebrates. 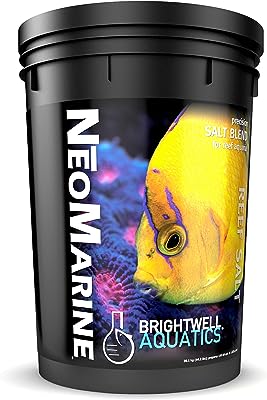 NeoMarine is a general synthetic marine salt for all types of captive marine life. Its formula matches natural seawater ratios of all major, minor, and trace elements.

NeoMarine is manufactured in the US. The manufacturer guarantees there is no detectable ammonia, nitrate, phosphate, or organic substances at standard specific gravity.

The salt is poured directly into the plastic buckets without a plastic bag – this offers less protection from moisture.

This salt is intended for fish and reef aquariums. The formula is a highly concentrated blend of synthetic sea salts.

The product uses anhydrous salt (no water molecules), which allows for uniformity from batch to batch as well as the ability to produce more saltwater with less salt.

The freshwater salt formula provides magnesium, potassium, calcium, and sodium along with trace elements such as iron, aluminum, and iodide.

It is designed to be added to RO or tap water. The Reef Salt is available in a 60-gallon mix. 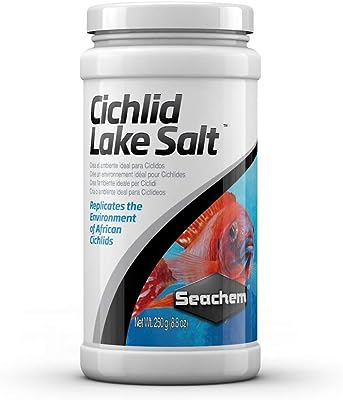 If you’ve got Rift Lake cichlids, Seachem has a specially formulated salt just for African cichlids. It is designed to be added to RO or tap water.

The freshwater salt formula provides magnesium, potassium, calcium, and sodium along with trace elements such as iron, aluminum, and iodide. 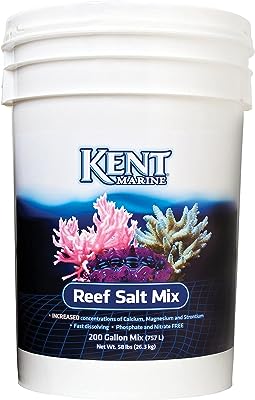 For over 15 years Kent Marine has been a leader in the aquarium trade. Kent Reef Salt is formulated for reef aquariums containing SPS and LPS corals along with other invertebrates.

It has been designed to meet the special requirements of reef aquariums with optimized concentrations of calcium and magnesium, which promote the growth of corals.

The salt is packaged in a plastic bag and added to the bucket for double moisture protection. Available in sizes from 32 to 200 gallons. 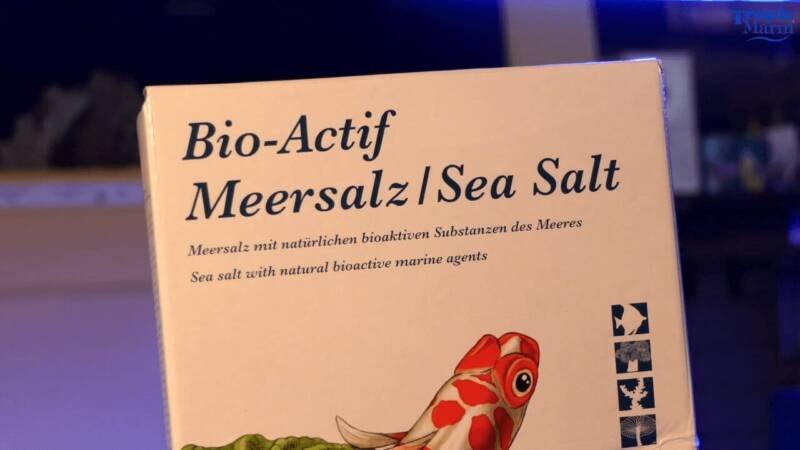 The polymers bind to microscopic particles of edible foods like bacteria and phytoplankton, which are then consumed by corals. 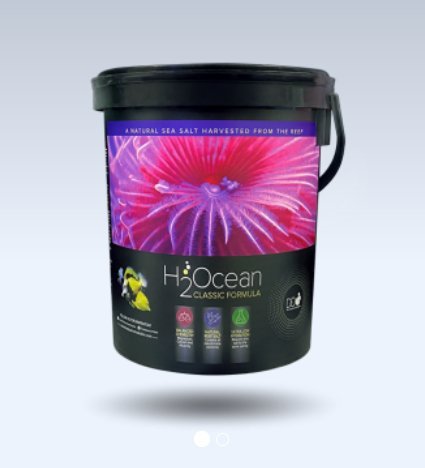 H2Ocean is a blend of sun-evaporated sea salt and synthetic salts. This salt has enhanced calcium and magnesium to stimulate corals and coralline algae growth.

This salt is intended to be dissolved in reverse osmosis water due to the boosted calcium and magnesium content. 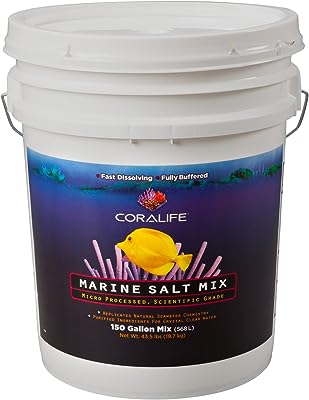 This salt is formulated for fish and reef tank use. The salt is fast dissolving and provides the proper pH level once dissolved.

The manufacturer makes no statements about extra calcium or magnesium.

This salt can be used in fish and reef aquariums. Reef aquarists should monitor the calcium and magnesium levels and add supplements if necessary.

Most saltwater aquarists use an empty five-gallon bucket to mix up a batch of seawater.

NEVER use a container that was used for something else. The mixing container should be new and never used for anything but mixing saltwater.

Using ice-cold water to dissolve salts will slow the dissolving time a little bit. Plus, the cold water will shock your marine life.

The salt will dissolve faster when the water is circulating in the container. The blend of salts and trace elements has different dissolving rates.

Moving water causes them to dissolve more quickly. I use a small submersible powerhead in my salt bucket.

Selecting marine salt is very subjective. Most aquarists start with a brand and stick with it for 6 to 9 months to see how their marine life looks and responds to the salt.

After gaining experience with one brand, it’s common to try another brand to see if makes an improvement. The switch is gradual through partial water changes.

The key is to know your tank’s inhabitants and gain the ability to gauge their health and happiness. Then you’ll be equipped to try another salt and know if it helps the tank thrive by the appearance of your corals, fish, and other marine life.

Also, remember to take it slow. Don’t make any drastic changes while evaluating a new salt.

If you are keeping saltwater fish or FOWLR tank, start with a basic salt with a good reputation. Instant Ocean Sea Salt is a proven winner along with Red Sea Salt.

For reef aquariums with SPS and LPS corals, you’ll have to choose if you want a salt fortified with extra calcium or a basic salt where you can add your own supplements.

I find Fritz RPM to be a good basic salt for reef-keeping. On the higher end of reef salts, you’ll find Tropic Marin Pro Reef and Aquaforest salt mix.

If you have any comments or questions, please leave them below.