There’s nothing quite as dramatic as setting up a reef tank. They have the best colors, textures, and excitement from the different flora and fauna. 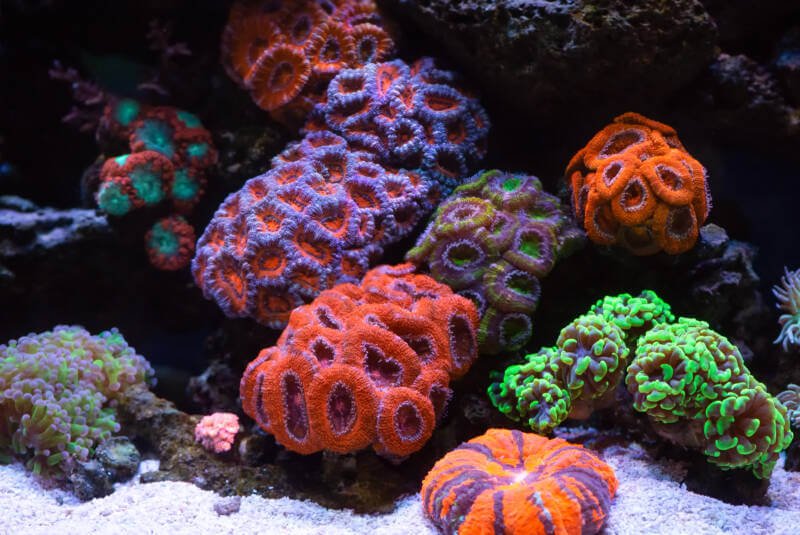 You can always create a colorful freshwater tank, but there’s something about the challenge of a reef tank that draws aquarists.

If you’re new to saltwater aquariums, odds are you’re looking for the simplest corals to start your journey.

If you’ve managed to keep soft corals alive and healthy, you’re on the right track. But if those soft polyp stony corals (SPS) feel like a stretch, never fear – there’s an in-between.

You’ll still need to do your homework and invest in top quality tank maintenance, but they’re hardier and less demanding in their care.

If you’ve spent time haunting coral displays in your local pet store, you may have glimpsed a few different LPS corals.

These vibrant species have long sweeper tentacles (more on those later), a rainbow of colors, and flowing movements.

So how to tell an LPS coral from an SPS coral? If you’re still getting your feet wet with reef tanks, this handy reference table will give you an idea.

Large polyp stony corals work similar to SPS corals: they grow by laying down a hard, calcium carbonate skeleton to protect the soft polyps inside.

LPS corals reproduce by spawning or budding – where a small portion of the parent separates to establish a new colony.

LPS corals have aggressive reputations, courtesy of their sweeper tentacles. These long, stinging tentacles have impressive reaches, and they prevent other corals from settling in the vicinity.

You’ll need to bear that in mind when placing your LPS corals in the reef tank.

Once you’ve mastered the reef tank, any LPS coral is up for grabs. As long as you stay on top of water quality and take care with your placement (so you don’t lose neighbors to those sweeper tentacles), you’re golden.

These are just some of the easiest LPS corals to handle. 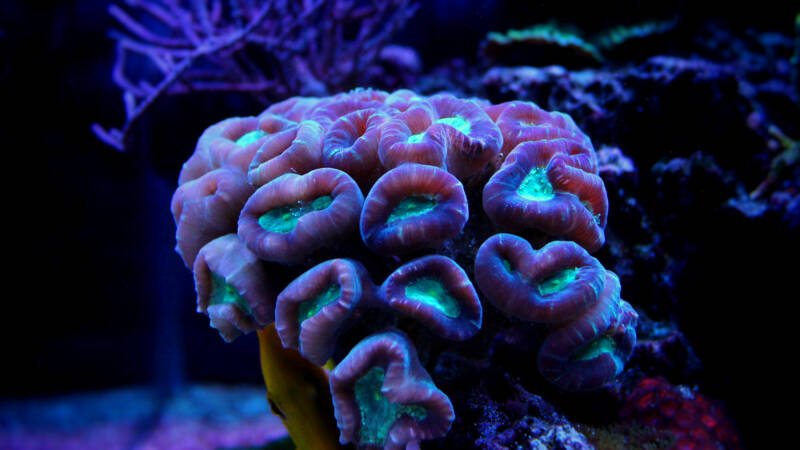 Despite many variations out there, the most common Candy Cane Corals come in red with white stripes (imagine that).

No matter which palette you choose, you’ll notice the subtle striping on your coral, adding a nice striation to the tank.

Candy Canes top the list of the easiest LPS corals to manage. You can place them anywhere in the tank, and they aren’t demanding in their lighting needs.

They also break LPS tradition in that they WON’T attack nearby corals; they’re peaceful in nature. 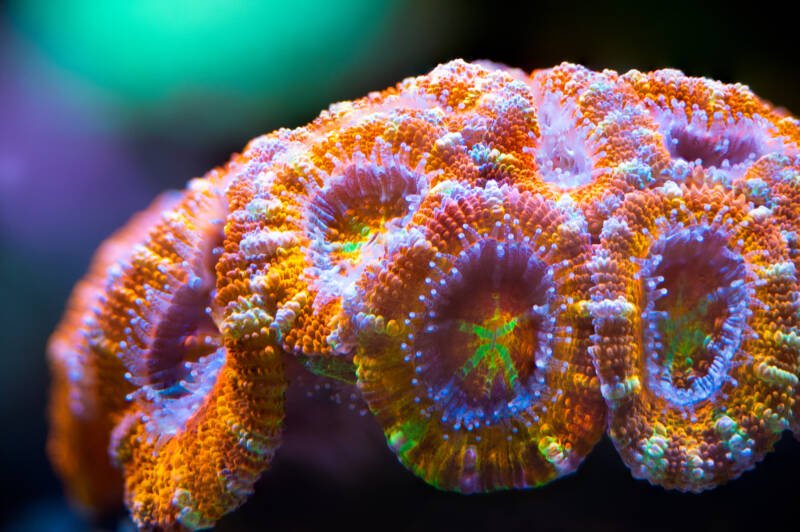 Acan Brain Corals have a unique arrangement of circles spreading out as they grow.

You’ll likely find the red variation the most readily available, but there are other colors out there. 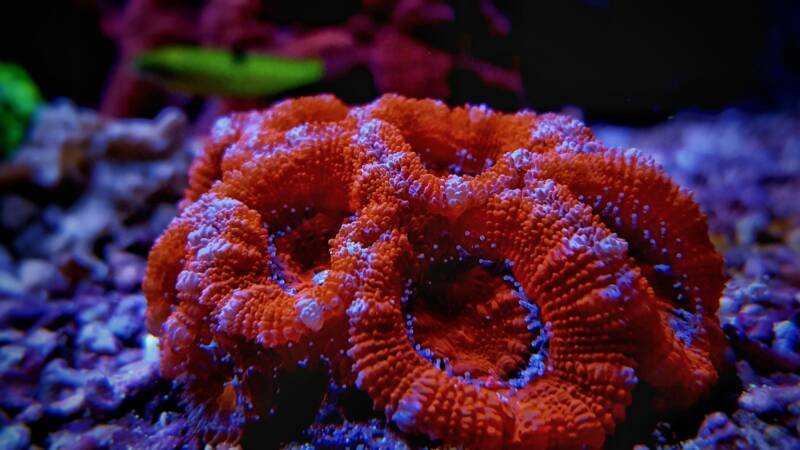 You can also find different patterns if you want a more exciting look for your aquarium.

Acans don’t rely on sweeper tentacles to defend their territory. Instead, they protrude their stomachs out of their mouths to attack any nearby interlopers!

As such, you need to leave several inches around your Acans. And keep them to the bottom and middle of the tank to achieve the best growth.

Hammer Corals may also show up under the name Anchor Coral.

They have dramatic movement of their anchor-shaped polyps, and you have a rainbow of colors to choose from.

If you get a cluster of these LPS corals, they’ll grow together to form a “Hammer wall” in your tank.

Hammers ARE more demanding in the care department. They prefer the bottom of the tank, and they need a strong water current. (And this way, you can appreciate those sweeping fronds)

You’ll also need to step up water quality monitoring to keep them healthy. 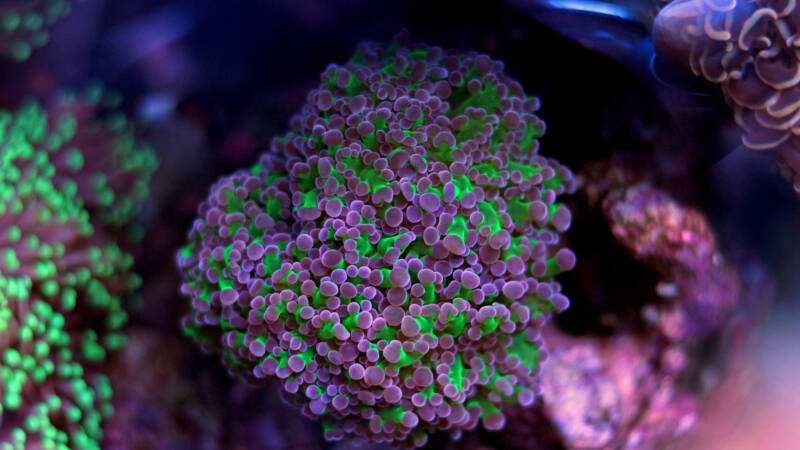 Frogspawn Coral looks very similar to the other Euphyllia genus corals. The same branching polyps appear, and you can find many of the same color variations.

They’re popular among aquarists for their vibrant appearance and dynamic movement.

They have 6-inch (15 cm) sweeper tentacles that sting anything encroaching on their space at night.

However, there’s a caveat: you can keep Hammer Corals nearby without a problem.

Frogspawns and Hammers coexist in harmony (and look fantastic together).

The Torch Corals provide delicate movement to a reef tank. Each branch drifts on the water current in a slow water ballet, and you’ll find almost any color you can imagine. 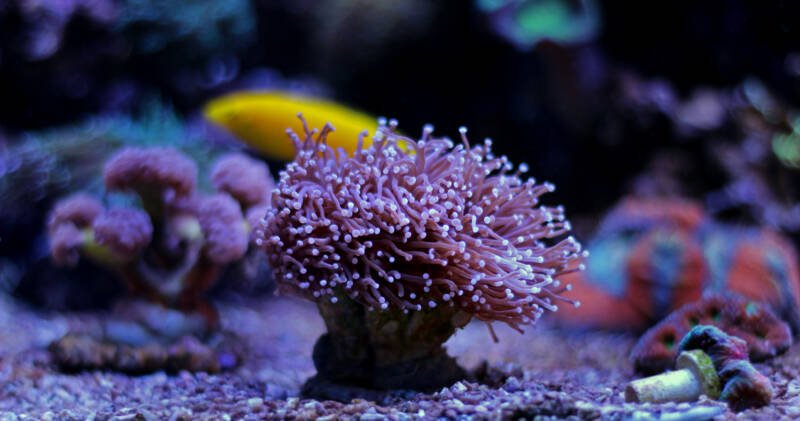 Lucky for you, this species is also fast-growing – even for LPS corals.

Similar to Hammer Corals, though, they aren’t the easiest LPS corals to manage. Unless you can ensure a healthy water flow at the bottom, you need to keep them near the top of the aquarium.

And watch out for those sweeper tentacles – they pack a punch. 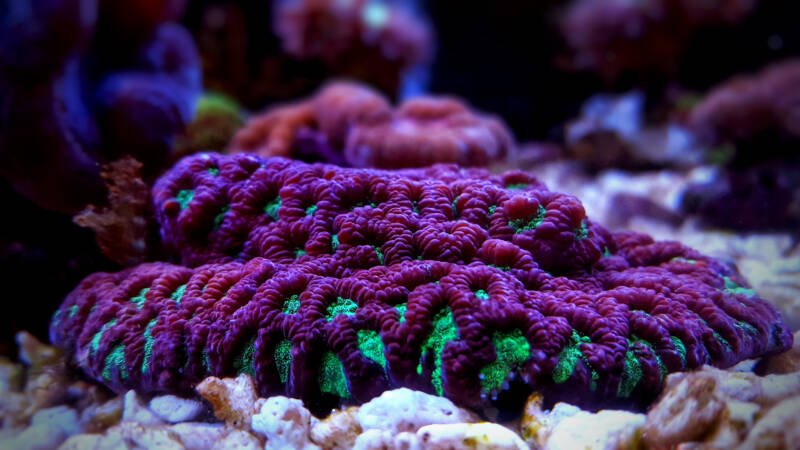 If you enjoy the shape of Brain Corals but want brighter colors for your reef tank, the Favites genus has the best selection.

You’ll find electric greens and purples, which will make any aquarium stand out.

And while these LPS corals aren’t demanding on placement or water flow, consider the neighboring real estate carefully.

The sweeper tentacles on this particular Brain Coral are LONG, and they’re not interested in sharing space with ANYONE. 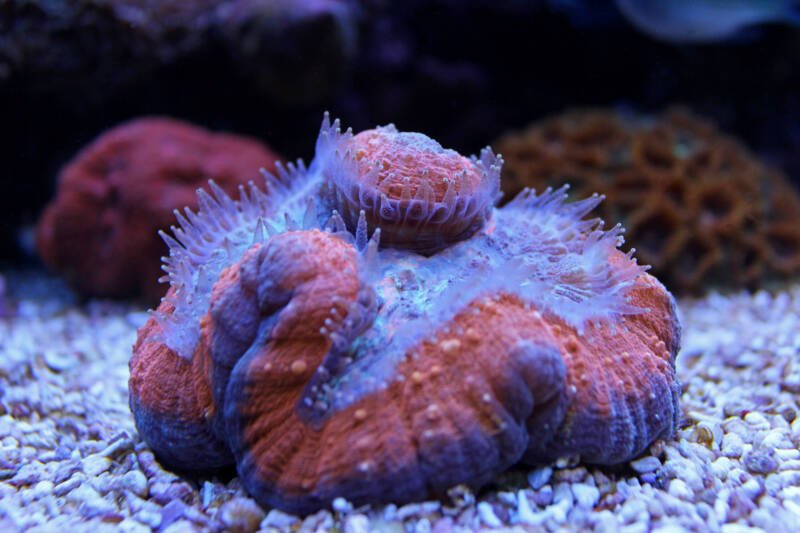 All brain corals share similar looping designs reminiscent of the fleshy organ from which they get their name.

The Lobophyllia genus comes in a variety of colors. Some are rarer and more expensive than others, so keep an eye on that price tag when you go shopping. 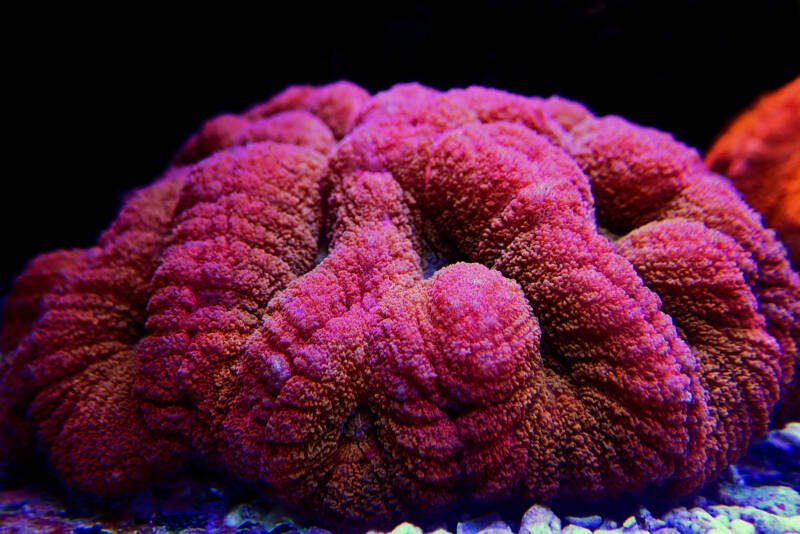 Unlike the Open Brain Coral, you can place this LPS coral anywhere within your tank.

They aren’t fussy about lighting, either; a moderate range is acceptable.

And you won’t need a strong water current – these corals tolerate a low water flow without a problem. 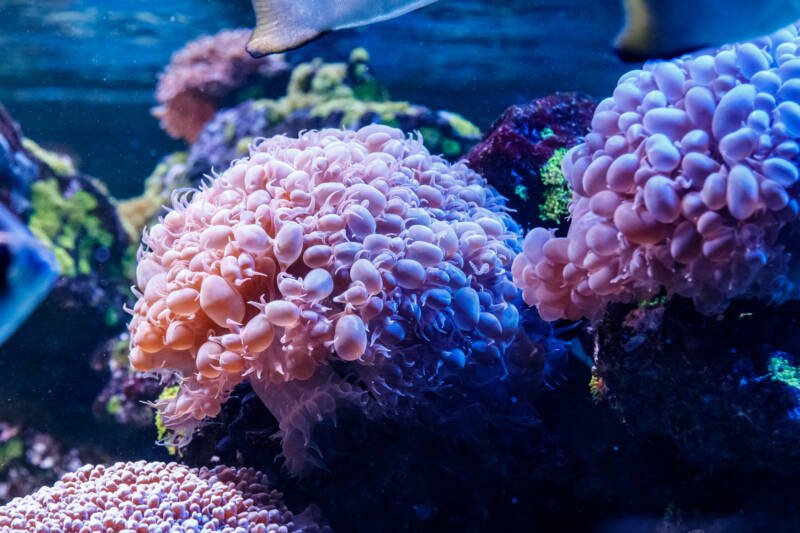 As you might guess from the name, Bubble Corals resemble a collection of fragile orbs clustered together.

They bob in the flow, looking as sweet and innocent as a cluster of balloons. 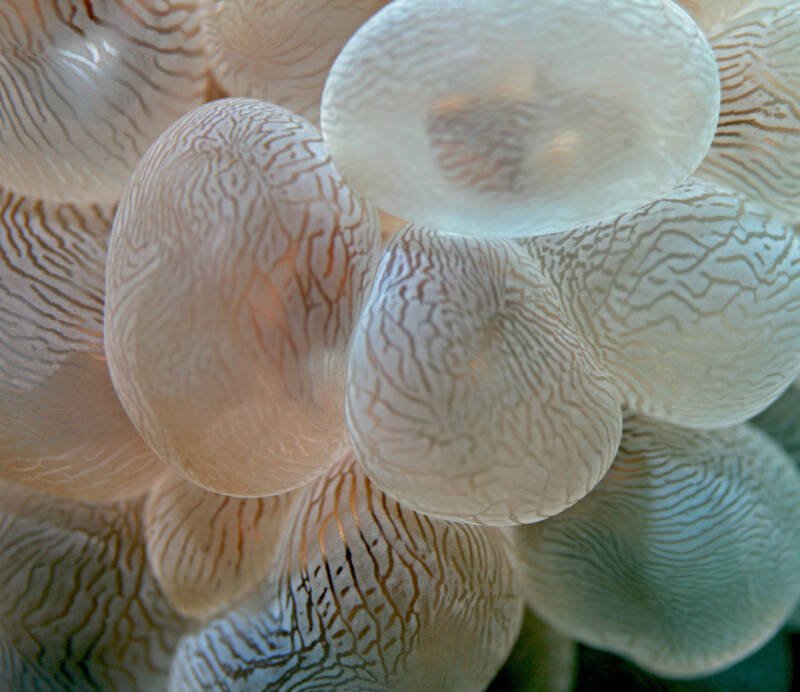 You can find every color you can think of – including a rainbow variety. However, the cute act ends there. Bubble Corals are VICIOUS.

You need to leave plenty of room on all sides to prevent these aggressive little LPS corals from taking swipes out of their neighbors. Otherwise, you’ll wake up in the morning to utter tank devastation. 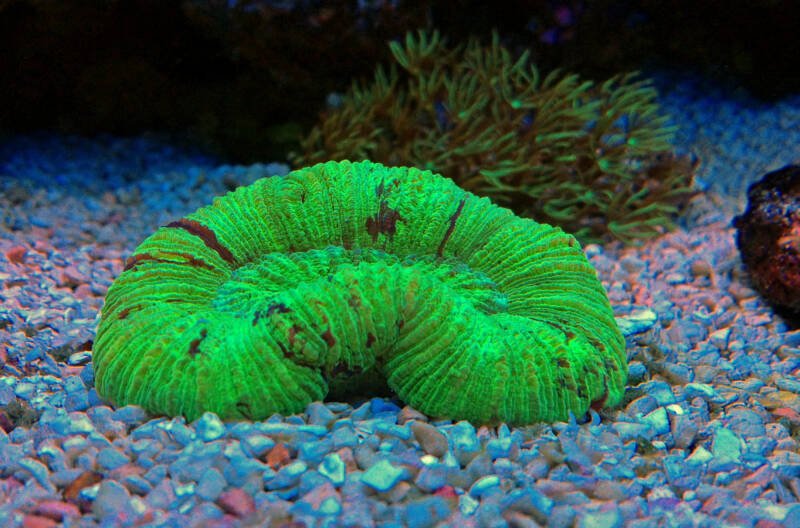 Open Brain Corals earned their name from the unusual shape of their growth. As they mature, they start to look similar to the inside of – well, the human brain.

Of course, they come in a more varied array of colors, making them more appealing. 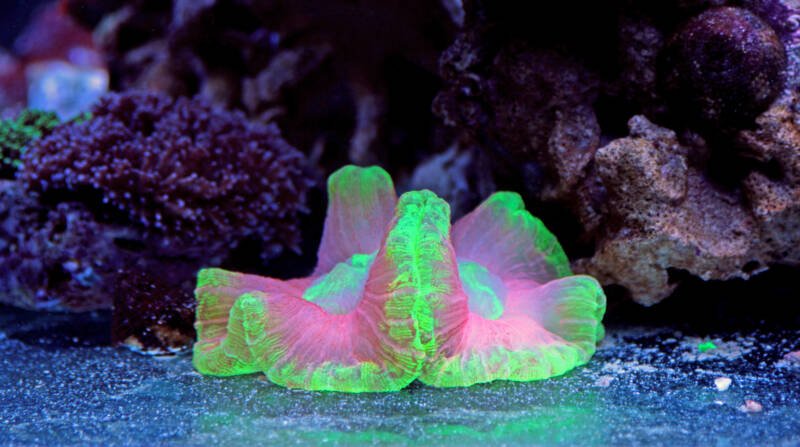 These LPS corals rank at the top in terms of care, making them a favorite with new aquarists.

Keep them along the bottom of your reef tank and allow plenty of room on all sides.

They WILL take swipes at their neighbors with their sweeper tentacles. 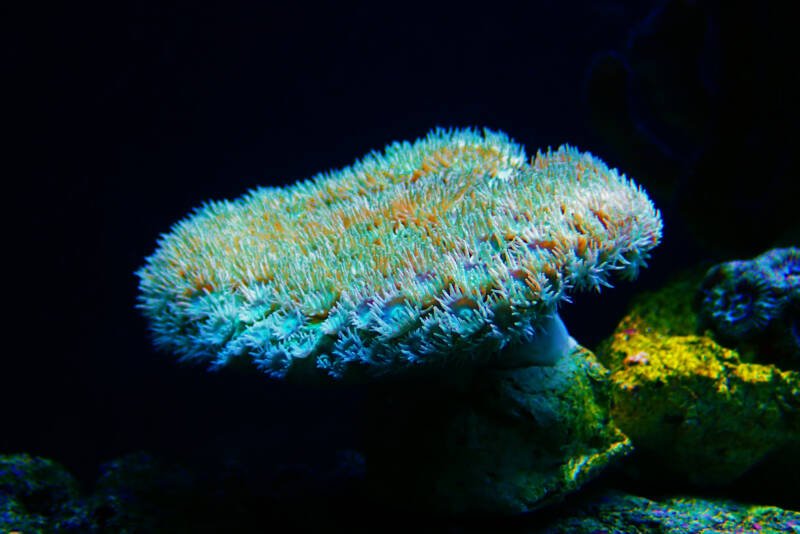 Pagoda Cup Corals come in a variety of shapes. If you relish a challenge, look for one with thin plating or a convoluted shape.

Otherwise, stick to the more basic “cup” design and choose a dramatic color. The choice is yours.

Much like the Candy Cane Coral, Pagodas have a docile nature. You can place them along the bottom or middle of your tank and not worry about their neighbors falling prey to a midnight attack.

Of course, make sure no one else harms THEM.

Easy to manage or not, you still need a stable reef environment before introducing your little LPS buds.

An adequately cycled aquarium starts you off on the right foot. While these invertebrates may be hardy, they appreciate a healthy home.

While LPS corals may tolerate less-than-ideal water conditions for short periods, you should still aim for the highest quality possible.

This will allow your corals to grow and thrive. Stability is critical with ANY coral – soft, LPS, or SPS.

As such, consider investing in some top reef tank accessories. The following will help you maintain an ideal aquarium for your corals.

If you’re able to keep the water stable, you can start thinking about graduating to SPS corals in the future.

Unlike when you have SPS corals with their itty-bitty polyps, LPS corals have polyps large enough to make mealtimes interesting.

All corals are filter feeders, but those delicate polyps sweep through the water and curl around in a delightful dance.

You CAN get away with feeding your LPS corals items such as Mysis shrimp – if your reef tank doesn’t have any other residents.

Such tasty morsels are too tempting for fish and other invertebrates to resist, and your corals may find their meal snatched right out of their mouths!

If you have a flourishing ecosystem in your aquarium, consider opting for an alternative, such as Polyp Lab’s Reef Roids.

Your LPS corals will enjoy the mixture, and you can feed them directly by using a turkey baster. (Fun for everyone!)

If you want to sneak your corals a more substantial snack, try distracting your fish on the other side of the tank. Offering them a cube of homemade fish food is a great trick.

While they’re busy nibbling on the frozen offering, your LPS corals can dine to their “heart’s” content.

When it comes to starting with a reef tank, LPS corals make the most sense for beginners.

They have the fewest demands, tolerate changes in water quality, and grow the fastest. So long as you watch out for that aggressive nature, you’re golden!

Do you keep LPS corals? Have you witnessed a sweeper tentacle attack?

Let us know your stories here!