Cardinal tetras are a staple schooling fish for many aquariums.

Their striking coloring, peaceful personality and hardy disposition make them a perfect addition to any aquarium.

Both beginning and experienced aquarists always find something new to love about this fish or setting up a tank for a tetra school. 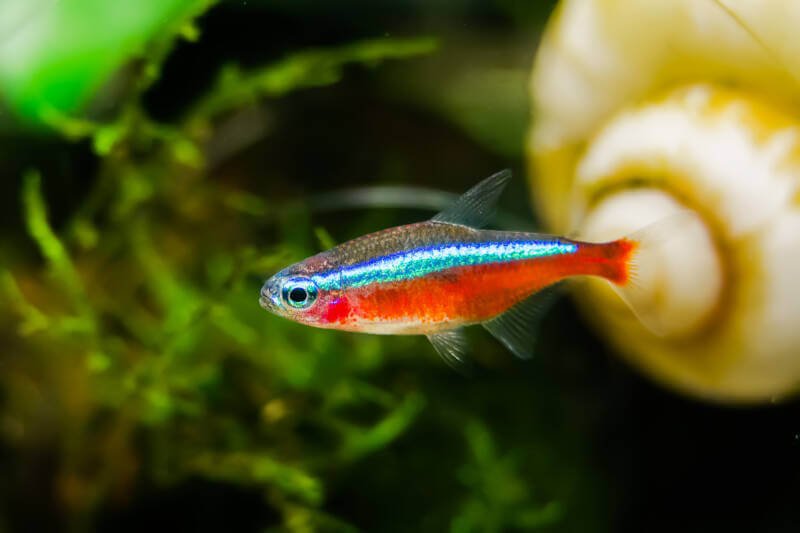 They are commercially available in countries around the world and are often featured in hobby forums and magazines.

They are also a favorite to showcase aquascapes. Frankly, there’s nothing that this versatile fish can’t be used for.

The cardinal tetra (Paracheirodon axelrodi) is perhaps one of the most distinct and easily recognizable fish in the aquatic industry.

Its body is bisected into thirds by stripes. The top line is a dark grey, the middle is a striking blue stripe, and the bottom is a bright red stripe.

The blue is nearly growing in its intensity and is very luminescent.

Its fins are translucent and short, stuck close to its body, and shaped practically for fast swimming.

Because of its coloring, the cardinal tetra is often mistaken for the neon tetra.

However, the neon tetra does not have distinctive stripes running parallel down its body.

Additionally, the neon’s tetras bright blue stripe is located along its top or middle.

The cardinal tetra only grows up to 2” in size and only lives an average of four years. Some have reported their fish living past this four-year mark.

This fish is one of the most peaceful types of tetra.

They are suitable for species-only tanks but make a beautiful statement in a community aquarium.

And since community aquariums tend to be of a larger gallon size, tetras especially thrive in these environments. 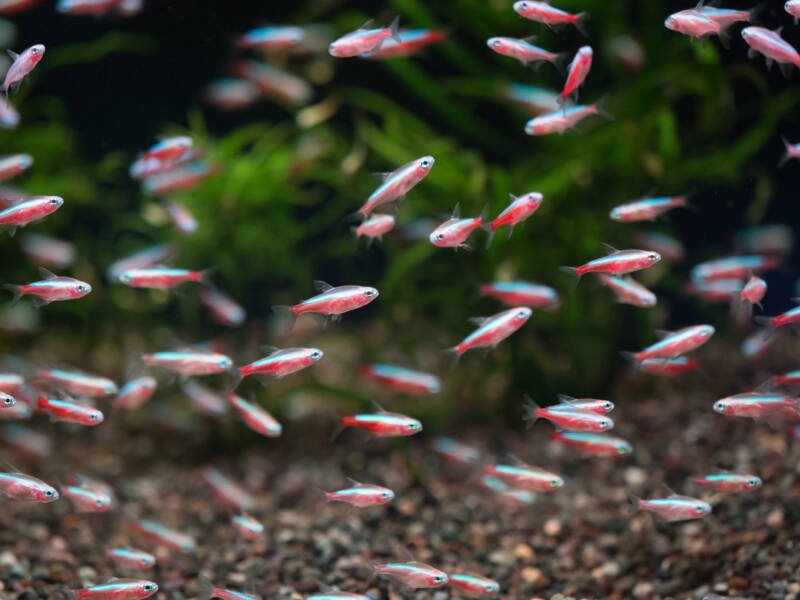 Cardinal tetras prefer to swim in the middle and top layers of the tank. They enjoy having lots of open swimming space.b

But they definitely also appreciate having lots of plants to rest, explore, and mate in.

These tetras have a high activity level and are almost always on the go. This may disturb any shy inhabitants, such as gourami.

However, depending on the type of community aquarium you set up, this may be the natural behavior for all of the tank inhabitants.

Cardinal tetra are native to South America. There, schools of this species inhabit slow-moving and well-vegetated waters.

Tributaries and rivers are commons places to find them. 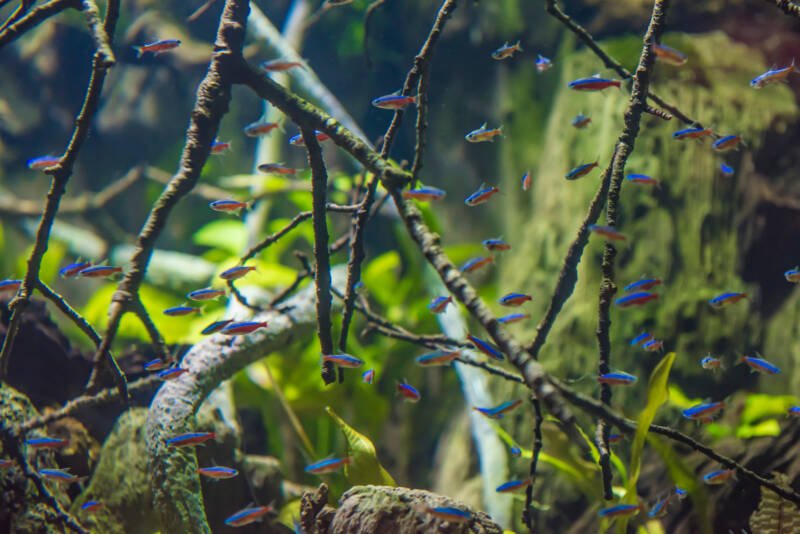 They also prefer shaded areas that have low or subdued lighting.

Their preference for these conditions has carried over into the aquarium hobby, despite cardinal tetra now being captive bred.

There is a significant amount of vegetation in these tributaries and other bodies of water.

Because of that, it’s recommended to keep live plants in the aquarium too. It will allow the tetra to explore, get away from each other, and mate if they need it.

This schooling fish needs an aquarium of at least 20 gallons. Larger schools and community tanks will require at least double that gallon size.

Long rather than tall aquariums are always better for this fish, as the cardinal tetra appreciates having room to roam and explore.

There are very few pieces of equipment that are needed to replicate the original habitat of the cardinal tetras.

Most of it will depend on the decision of whether or not to include live plants in the aquarium. 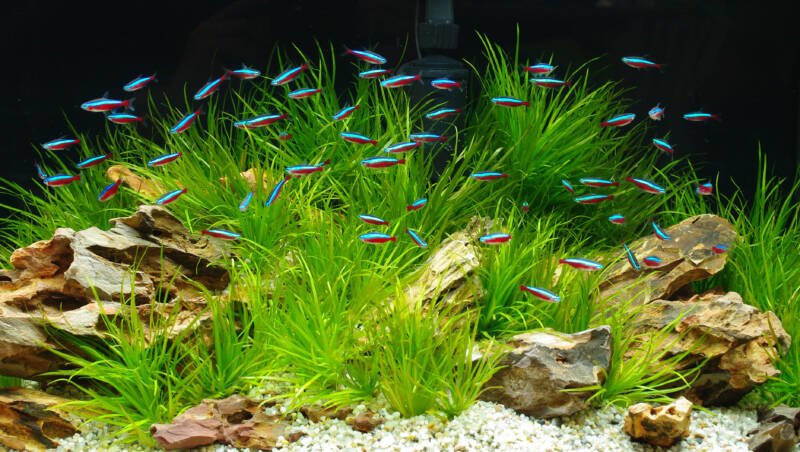 Lighting and substrate are likely to be the most expensive components of setting up an aquarium to house cardinal tetra. However, there are plenty of options available on the market that fit everyone’s budget and work well.

The cardinal tetra is a fairly hardy fish that does well for beginners and is very forgiving in terms of water quality and parameters. 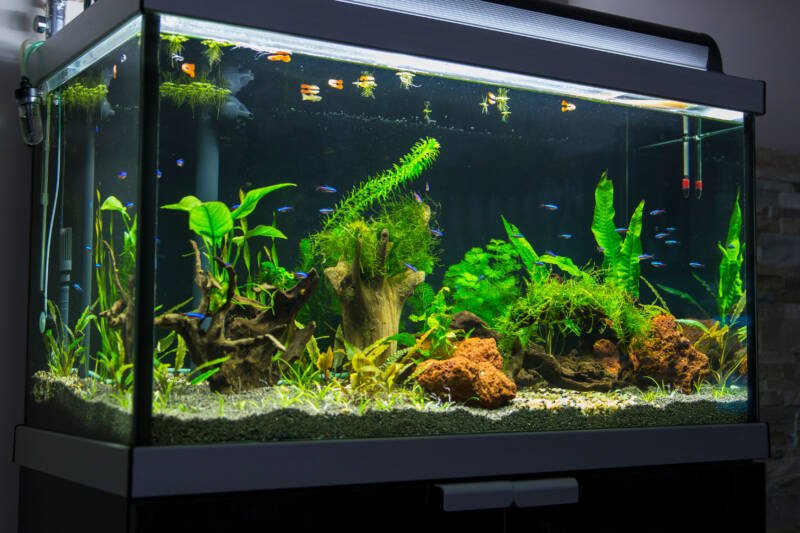 That being said, there are specific temperatures and water ranges that it prefers.

Though not enjoyable, the cardinal tetra can handle ammonia, nitrite, and nitrate levels of up to 2 ppm.

Some aquarists have even reported level as high as 5 ppm with no loss of life within cardinal tetra schools. However, testing this experiment isn’t recommended.

Weekly water changes are an absolute must, even if you keep these tetras in a species-specific tank.

As mentioned earlier, cardinal tetras are extremely friendly. Schools do fine in species-only tanks, but they must prefer being around other tank mates. These tetra can live peacefully with many different types of fish, including:

It’s best to keep them with other fish that are also docile and have peaceful temperaments. Avoid fish that are known to bully (and worse, eat) smaller fish.

To avoid this temptation altogether, many aquarists keep cardinal tetras with other small schooling fish that can’t fit the cardinals in their mouths.

Cardinal tetras are not picky eaters and will accept most of what you put in the tank during meal times.

They will avidly eat frozen, freeze-dried, and even live food when the desire strikes them.

In general, they prefer meatier foods. Depending on the food, the pieces may need to be broken up before feeding time.

And, of course, flake food and pellet food will also be gobbled up in a matter of seconds. This is especially the case with community aquariums.

You should feed cardinal tetras (and other inhabitants) only as much as they can eat within three minutes.

Aquarists should provide meal times at least once per day.

If you notice their stomachs bulging, stop feeding them. Slight distension is normal, but anything past that is a sign of overeating. 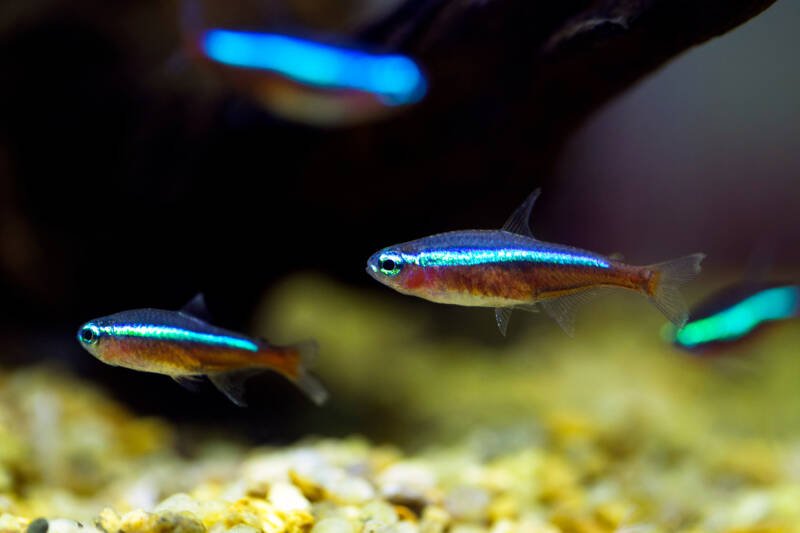 To tempt cardinal tetras to breed, you must once again mimic their natural habitat and alter the water conditions.

If you follow the steps below, your tetras will hopefully begin laying eggs soon.

To achieve these parameters without disturbing other fish parents, a separate breeding tank is almost always set up.

If the male and female cardinal are successful and fertilize the eggs, the female will begin spawning and laying as many as 500 eggs.

Once the eggs are laid, the parents should be removed from the breeding tank, or the aquarist should set up a temporary tank and place the eggs in there to prevent the parents from eating them.

Within 24 hours, the eggs will hatch. Within the week, they’ll be waterborne and independent.

Baby brine shrimp and infusoria are just two examples of what you can feed them during pregnancy and sexual intercourse.

However, it’s also important not to focus too much on breeding. Cardinal tetras are not impossible to breed in captivity, but it is significantly more difficult to tempt them.

Reasons to Get Cardinal Tetra

There are many practical reasons to buy cardinal tetra.

They are simple to care for, impress all onlookers, and are very hardy in terms of water conditions.

Beyond this, their inquisitive and energetic disposition makes them a treat to watch as they roam all over the tank and interact with the other community inhabitants.

They also show beautiful colors that are only enhanced when placed in a proper school.

As they flit about the aquarium, they resemble small red and white firecrackers.

Fortunately, the beauty of cardinal tetras lasts significantly longer than that of fireworks.