Bloodworms are one of the most common meat foods for both freshwater and saltwater fish.

In fact, they have become a staple in the diet of many tank inhabitants. Once offered, fish will quickly devour them.

They are found in most pet stores in either frozen or freeze-dried varieties.

Whether your finned friend is an exclusive carnivore, opportunistic omnivore, or herbivore with occasional tendencies toward meat, bloodworms are sure to be their favorite meals.

Despite how popular they are in the aquarium industry, many hobbyists feed their fish bloodworms, not knowing much about them.

For example, they’re not aware that there are actually different types of bloodworms, whether or not bloodworms can live in their aquarium if purchased live, or how dangerous bloodworms can be for fish.

Types of Bloodworms and Food Varieties

There are two primary types of worms that make up a bloodworm meal, which is more of a generic term rather than a specific name.

The first type is technically not a worm at all, but rather larvae from midge fly.

These are bright red and make up the majority of the bloodworm meals in stores.

They usually grow to less than one inch in length when they’re harvested and produced for aquarium use.

They are a blush pink color and can grow up to 14 inches long.

These types of bloodworms more closely resemble the worms you may find in your yard. Some of them also have a venomous bite when alive, as opposed to the non-biting midge fly.

Once bloodworms of either type are prepared for use in the aquarium industry, they come in three varieties: 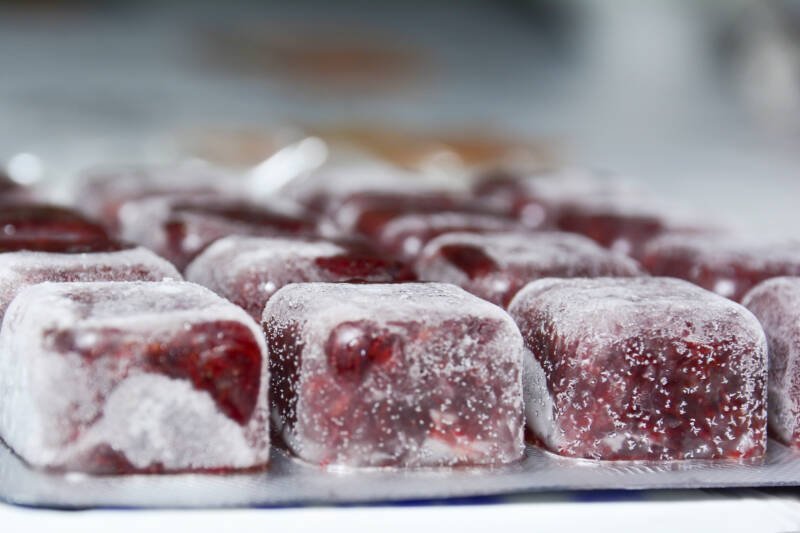 Frozen bloodworms are the most commonly available variety in stores.

They come in small blocks or thin sheets that can be cut up and used as necessary.

This type has the advantage of lasting for months in the freezer!

This makes them the best choice for anyone who has limited access to pet stores or fish supplies.

To feed frozen bloodworms to your fish, simply cut the sheet or cube (if needed) and thaw it out.

Then drain the excess juice, as the fish won’t eat this, and it can cause issues with your water quality over time.

Another great benefit to frozen bloodworms is that they’re unlikely to be carrying diseases, infections, or parasites.

But a massive drawback to using frozen varieties is that the fish won’t exhibit any natural hunting behaviors when feeding.

They’ll simply come to the tongs, net, etc. and take the worms.

If you’re worried about how feeding aggression may translate into regular aggression in community tanks, this is a boon.

But for single-species or inhabitant tanks like betta tanks, this can be very disappointing. 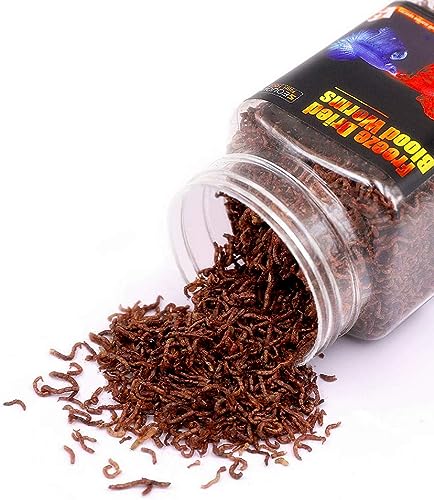 Freeze-dried bloodworms are those that have been dried and preserved.

They most often come in plastic tubs that range in size from less than one ounce to bulk offerings.

Some stores also offer Grade A and Grade B of bloodworms. It’s better to buy Grade A, as Grade B is lower quality, and the tub may contain non-bloodworm elements.

To feed your fish with these bloodworms, you’ll need to soak them in treated water for several minutes to rehydrate them first.

Soaking them for under 5 minutes will sufficiently soften them without causing them to sink.

If sinking them is the goal (for example, if they’re for bottom feeders), then soak the bloodworms for approximately 10 minutes.

Because freeze-dried varieties are less nutritional, many aquarists are less enthusiastic about feeding these bloodworms to their fish.

Many also worry about freeze-dried bloodworms not soaking long enough and expanding in their fish’ stomach once eaten, which is a legitimate concern and can cause health issues.

However, if you buy a variety that is high in crude protein, make sure to soak the worms before feeding properly.

Freeze-dried bloodworms can be just as good for your fish as the others.

Live bloodworms are harder to find that frozen or freeze-dried variety.

Also, they are less convenient, don’t last long, and must be used quickly after being purchased.

Larvae only stay in this stage for roughly ten days, after which point they’ll mature and continue growing into midge flies.

Since they’re already sold as larvae, this means that the time you have to use them is generally only 2 – 5 days at most.

When purchased live, bloodworms have to be stored in the refrigerator.

Add enough conditioned water to cover the bottom of the container. When ready, rinse and add them to your tank.

Make sure not to get any of the water from the bloodworm container into your tank!

Besides being more inconvenient to find and store, live bloodworms also have a higher chance of carrying infection or disease. This can cause serious health problems for your fish if they eat an infected bloodworm.

Almost every type of fish, except strict herbivores, will eat bloodworms.

Both freshwater and saltwater hobbyists use bloodworms as part of their fish’s regular diet. This includes fish such as:

And these are just to name a few! Nearly every domesticated species in the aquarium trade eats meaty foods and enjoys bloodworms.

Even aquarium inhabitants other than fish readily eat bloodworms. These animals include:

All will quickly swarm around the feeding tongs, net, or spot when bloodworms hit the water.

And though the voracity with which some fish eat this meal can be surprising to new hobbyists, it’s essential to understand that bloodworms are part of a balanced diet for many fish.

Do your research and make sure you’re feeding your fish the right types of food and the correct quantity.

How Much/ How Often Should I Feed My Fish Bloodworms?

The number of bloodworms you feed your fish will mainly depend on the size of your fish and how often they need to be fed to promote a healthy lifestyle.

A good rule of thumb is to see how much your fish can eat in three minutes or how much they can eat before their stomach starts bulging. Stop at whichever point comes first. 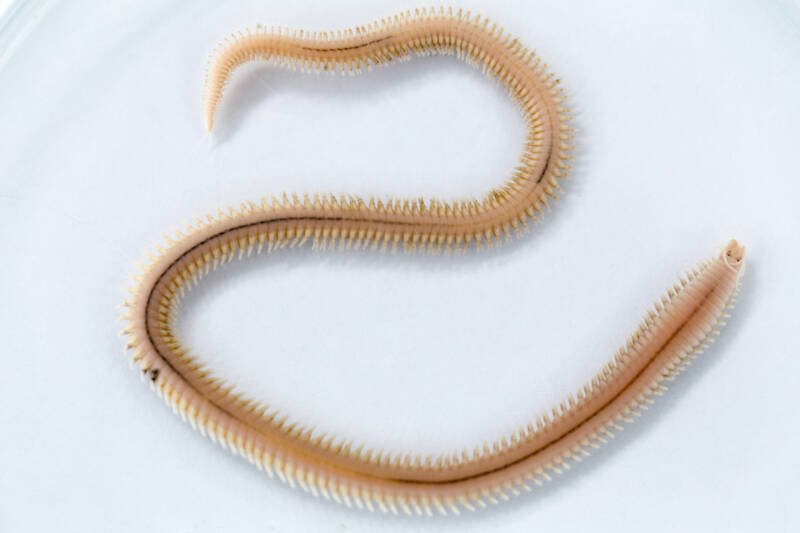 Overfeeding can cause constipation and other health issues that range in severity.

Also, remember that bloodworms should not be fed exclusively to fish or other animals.

Instead, they should be part of a varied diet and interchanged with other foods:

Can Bloodworms Live in an Aquarium?

If you’re talking about midge fly larvae, the answer is NO.

Remember, larvae are only in that stage for roughly ten days or so. After that, they become pupae and then adult midge flies.

No matter what stage of life they’re in, they are land-dwelling creatures that need air to breathe.

They cannot survive underwater, even if you buy live bloodworm larvae and release them into your aquarium.

If you’re talking about bristle worms, the answer is… maybe, but it depends on the type of aquarium you have.

Bristle worms live in the seabeds of marine waters, so you’d have to recreate these conditions for them to survive.

However, many common saltwater inhabitants are natural predators of bristle worms, so it’s unlikely they’d live long even if you did introduce live bloodworms into your tank.

These predators include crabs, wrasses, shrimp, dottybacks, pufferfish, and more.

And (obviously) frozen and freeze-dried bloodworms are already dead and so don’t pose a problem.

Can Bloodworms Harm or Kill My Fish?

Midge fly larvae aren’t a threat to you or your fish.

Even when mature, midge flies are non-biting and rarely carry life-threatening diseases.

The only way these types of bloodworms can harm your fish is if you feed your fish too many of them.

This can cause constipation and other health issues, as previously discussed.

The common bristle worm, which comprises a type of bloodworm and is fed to fish, is not dangerous and will not hurt your fish. 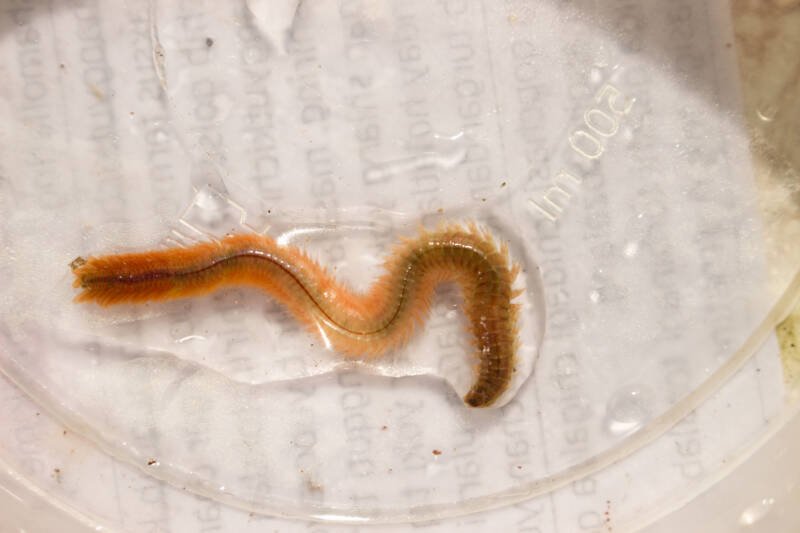 If live bristle worms are introduced to your tank and survive, they will become scavengers and impromptu members of the clean-up crew.

However, there are more dangerous varieties of bristle worms called fireworms (Amphinomidae family).

These are not sold as bloodworms, but if they make their way into your tank (usually as a hitchhiker on live rock), they are dangerous and should be removed as soon as possible!

They are carnivores and will attack fish (and even corals) if given the opportunity.

They can be removed by introducing natural predators, with bristle worm traps, or manually if you can catch sight and hold of them.

Bloodworms are a popular food for many different varieties of fish.

Some hobbyists initially don’t learn about them beyond their use as food. However, it’s beneficial to know more about what you’re feeding your fish.

There are tons of advantages to using this type of food and few drawbacks.

Bloodworms are a nutritious meal to give to your fish and other aquarium inhabitants and be fascinating in their own right!