Look on almost any list of “Compatible Tank Mates,” and you will likely see a loach.

Most loach species are peaceful bottom dwellers that want nothing more than to keep to themselves and forage for food, making them ideal for community tanks.

As an added benefit, many love to snack on algae and nuisance snails, making them valuable members of your tank’s cleanup crew.

Below are a few things to keep in mind when considering a loach for your tank.

Loaches are long-lived, and to help them reach a ripe old age, make every effort to recreate their natural habitat in an aquarium setting.

These fish need a soft, sandy substrate so as not to damage their underside and sensitive barbels.

Most can be shy, and all need smooth-sided hiding places to duck into from time to time. Add live plants oxygenate the water and promote the growth of algae, which loaches love to eat.

You will notice that for most loach species, the recommended tank size will seem large compared to the size of the fish.

Most loaches require a small group of their own to feel comfortable and exhibit their best behaviors.

They also require a sizable amount of swimming space along the tank bottom, so select a long tank versus a tall one. When planning the layout, always place plants and decorations near the perimeter.

Loaches have thin scales, some of which are embedded under the skin.

As a result, these fish are more susceptible to disease and need well-maintained, stable water conditions.

Always introduce your loach to a mature tank and take care with medications as loaches are sensitive to the higher doses used by other species. 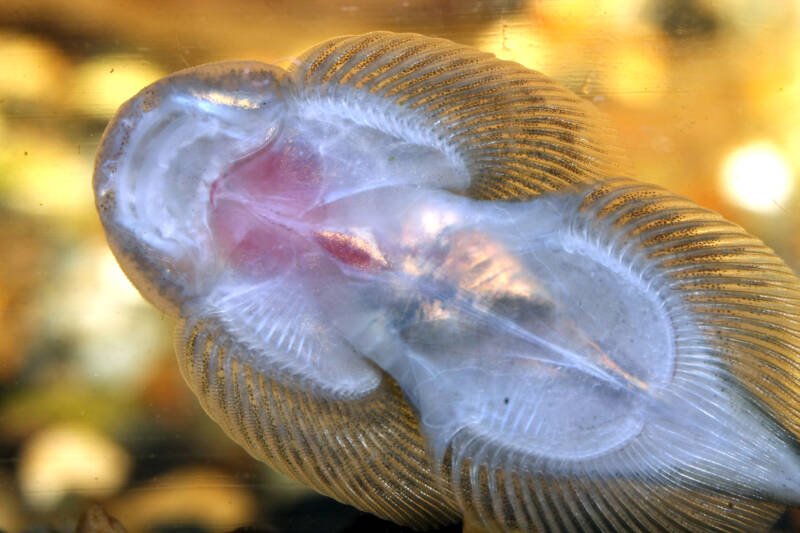 Feeding loaches is simple, just make sure that the food is high quality and sinks to their level.

These omnivores eat a variety of live and frozen foods, including insect larvae, bloodworms, daphnia, and brine shrimp.

Do not forget blanched vegetables to round out their diet. Sinking pellets work well, however, avoid flake foods.

Some loaches favor a more carnivorous or plant-heavy diet, so verify specific dietary needs to provide them with the best care.

The following are some loach species that you may wish to explore further. 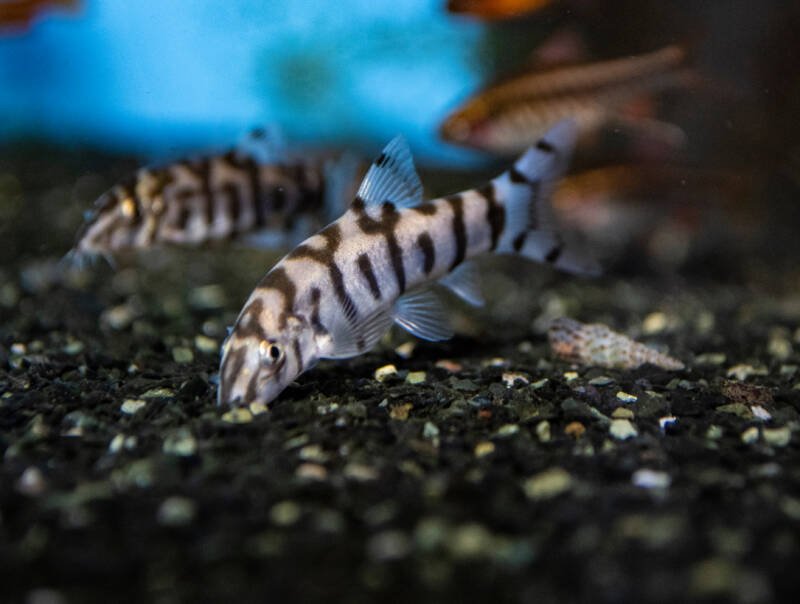 Minimum Tank Size: 40 gallons for a single fish, add 15 gallons of water for each additional loach

Yo-yo loaches are fun and energetic, bouncing up and down through the water column and active during the day.

These long-lived fish can be a part of your peaceful community tank for up to 20 years with a large habitat and stellar care.

Most specimens have a silver-colored base, and each has a unique pattern covering their back that changes as they age.

While they can reach up to six inches in length in the wild, in captivity, they stay closer to 2.5 inches (6.4 cm).

They require a group of five to six of their own to be healthy. 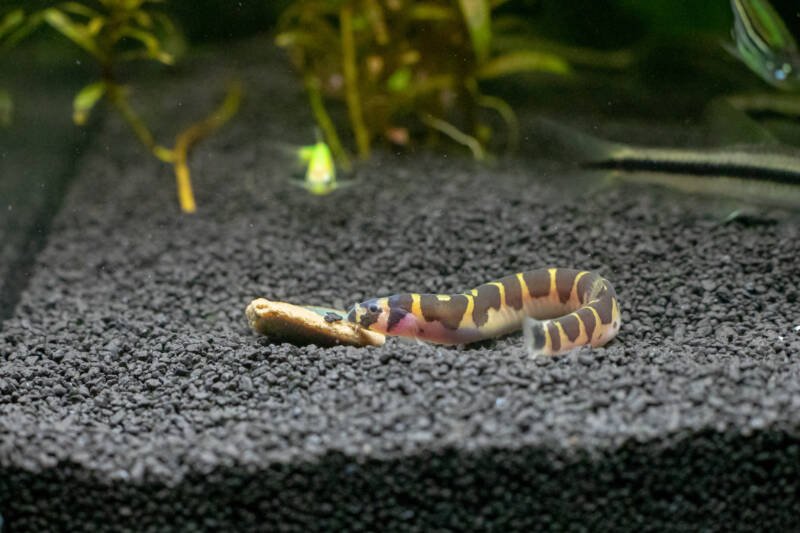 Renowned for its ability to get along well with other fish, the kuhli loach is a popular addition to home aquariums.

It is native to freshwater streams in Southeast Asia and has an impressively long lifespan of up to 10 years.

Long, thin, and sporting tiny fins, this fish looks like an eel with a bushy face.

They come in striped and all black color variations and reach an adult length of three to four inches (7.6-10 cm). Keep them in a group of at least five.

Make sure to cover the intake of your filter and have a secure fitting tank lid so your kuhli will not get into trouble. 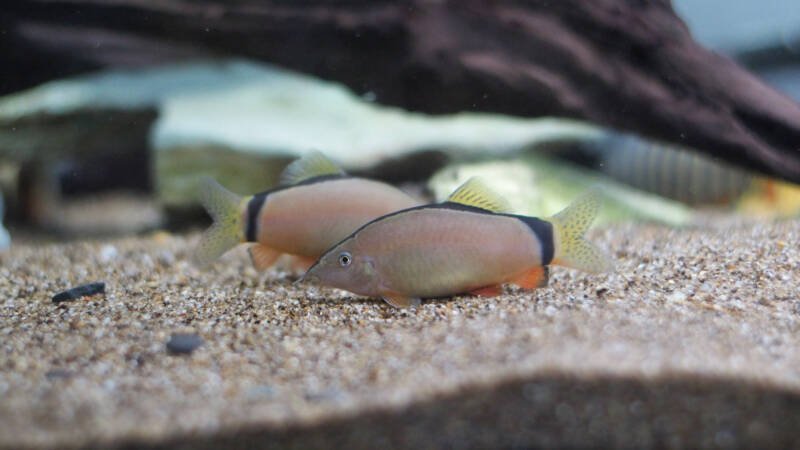 The skunk loach is native to the waters of Cambodia, Laos, and Thailand.

Take one look at the thick black stripe down its back to guess where it gets its name.

Skunk loaches reach four inches (10 cm) in length and have a feisty personality.

Keep them in groups of at least five to spread out hierarchical aggression.

They hide during the day and burrow into the substrate near rocks or other tank decorations, so make sure these are stable.

Pair this fish with fast swimming species that occupy the upper levels of the tank. They can nip fins, especially if the skunks are in too small of a group. 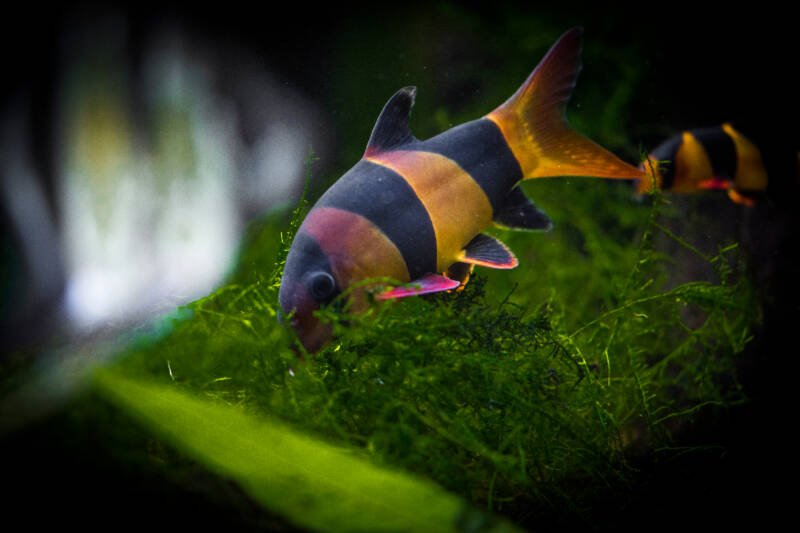 Do not be fooled by their tiny size when you first purchase them; clown loaches reach a sizable adult length of up to 12 inches (30 cm), so a large tank is a necessity.

Be prepared for a long-term commitment as clown loaches live an average of 10 years in captivity – even longer with excellent care.

Keep these fish in a group of at least five, or they may hide excessively.

Other unique behaviors of this highly active species are shadowing (or mimicking the movement of) other fish and lying still on their sides on the tank bottom, much to the alarm of the new aquarist! 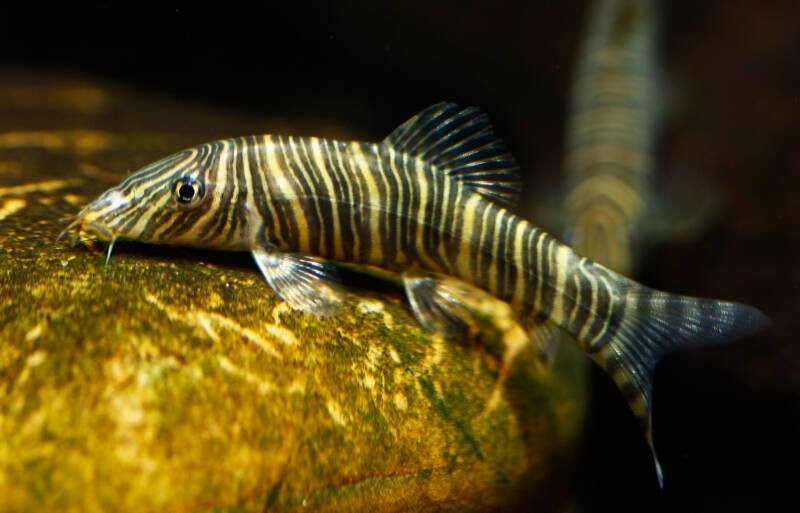 Another loach from western India, this fish prefers stiller waters.

Zebra loaches are considered endangered due to pollution and development in their native habitat, so seek specimens that are bred in captivity.

These attractive fish are covered head to tail in intricate stripes and reach between three to four inches (7.6 cm) in length.

Keep them in a group of at least five to showcase their peaceful behavior.

Do not house this active loach with long-finned fish as zebras tend to nip.

This loach lives in fast-moving streams of China, Southeast Asia, and India.

Looking like a cross between a loach and a stingray, this streamlined species is wonderfully adapted to swift currents.

Their reticulated pattern helps them blend in with light-dappled river bottoms.

They reach an adult length of two to three inches (5-7.6 cm) but require a sizeable tank. 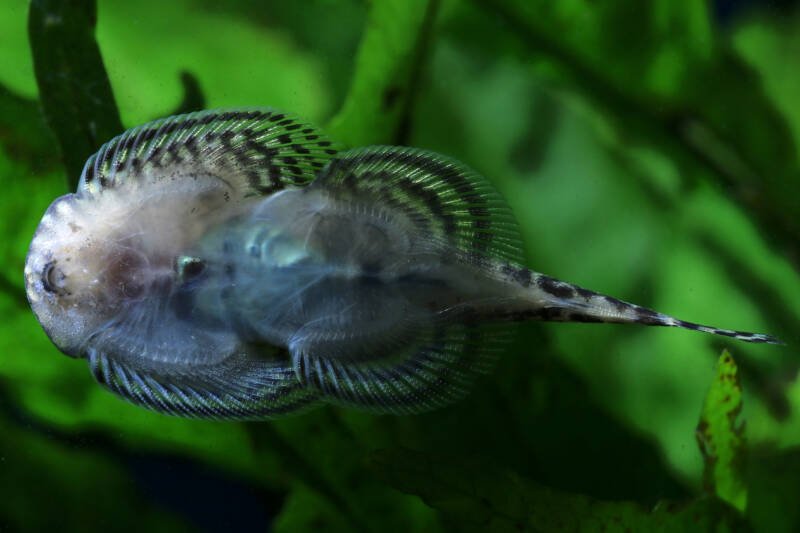 They are best kept in groups of three to four and need strong current and highly oxygenated water that is challenging to maintain in a smaller tank.

Hillstreams like their water a bit cooler than many popular aquarium fish, so keep that in mind. 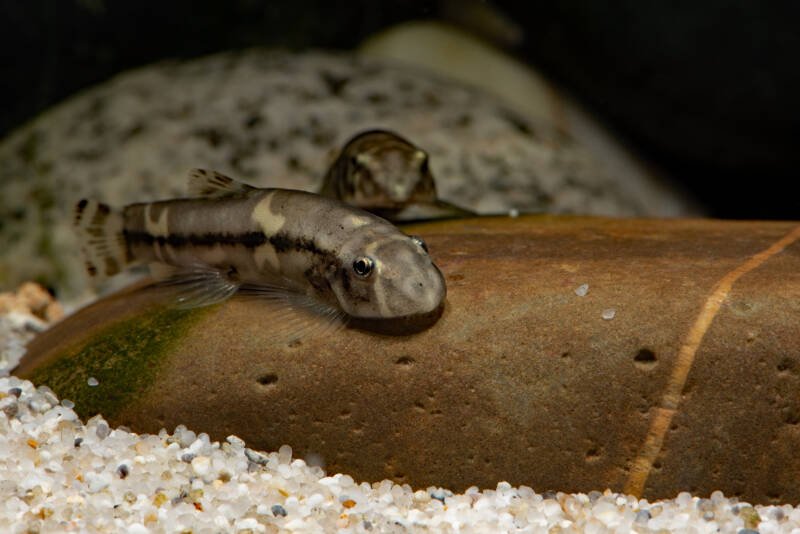 The panda loach lives in the fast-moving headwaters of China’s Dayao Mountain region.

These shallow, seasonal waterways are crystal clear with a high oxygen content.

The panda’s adult length is only two to 2.4 inches (6 cm); however, as with the hillstream loach, they do best in a larger tank to accommodate their water flow and oxygen needs.

They are omnivores that require predominantly algae and fewer meaty foods.

Keep them in a group of four and watch for any territorial behavior.

Juvenile pandas display the high contrast, black and white coloration that earned their name. This color becomes subdued with age. 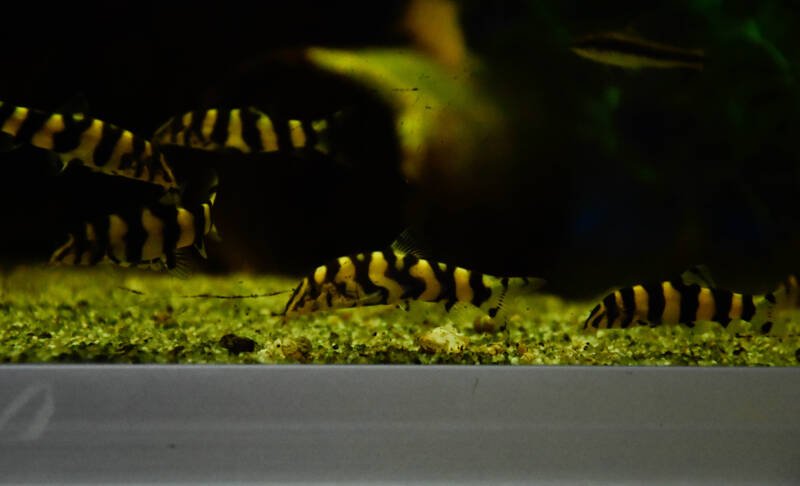 A quick look at a juvenile golden zebra, and you might mistake it for the popular yo-yo loach.

The zebras’ pattern continues to develop as they age.

Also known as the Burmese or silver striped loach, golden zebras forage at night but can be active during the day in a well-planted tank with are numerous hiding spaces.

They love to explore their environment and are comfortable in a group of at least five.

They are peaceful in a community tank and can help keep down pest snail populations. 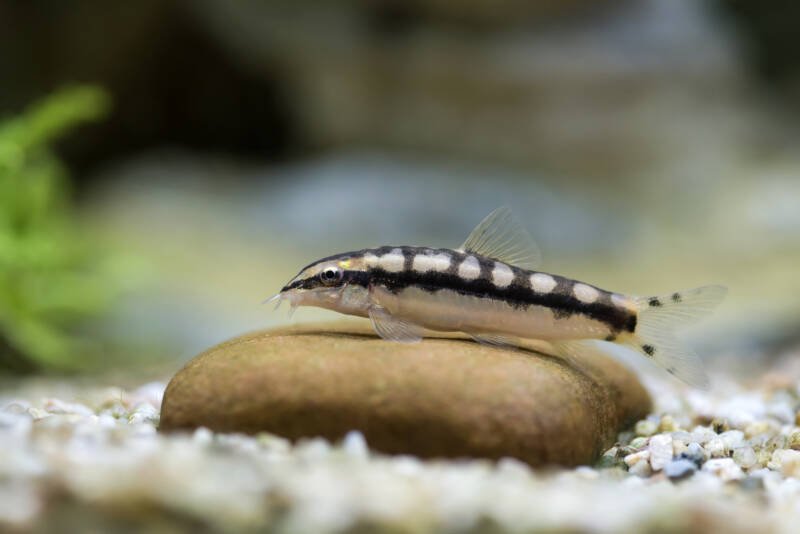 The chain loach is a highly active species hailing from the waters of Thailand.

Keep them in a group of six to 10 to spread out hierarchical aggression, and do not pair them with peaceful species that also occupy the bottom of the water column.

Environmental stressors are contributing to the species’ decline in the wild, so choose captive-bred specimens.

They are a small, two-inch size (5 cm); have a long lifespan of up to 12 years, and feature a golden base color with chain-like markings.

The water in their tank should be clean, clear, and with ample current.

They can nibble on live plants, so select hardy species for your habitat. 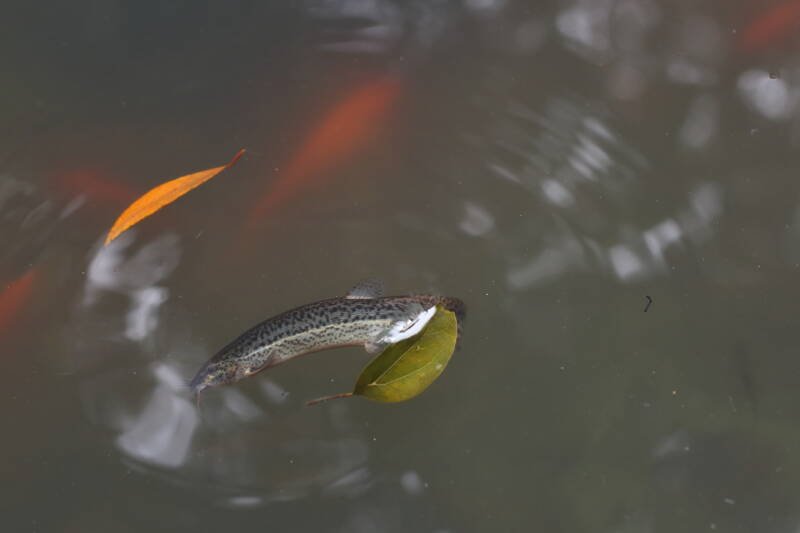 The eel-like pond loach is also known as the weather loach, dojo loach, or Chinese weatherfish.

They become highly active when barometric pressure decreases and thus serve as a traditional predictor of approaching storms.

This hardy fish favors shallow waters with muddy or silty substrates and can withstand environmental extremes, including temperature swings, low-oxygen waters, and periods of drought.

They burrow in the substrate so secure all aquarium plants and decorations.

Pond loaches reach a large adult size of four to eight inches (10-20 cm) and can be a pest species if introduced into non-native environments, where they easily outcompete native species.

This many-spotted fish goes by many names, including the marble loach, cloud botia, angelicus loach, botia “angelicus,” and the Burmese border loach.

They are endemic to the clear headwaters of the Salween River Basin bordering Myanmar and Thailand.

These waters are slower moving, well-oxygenated, and shady. Polka-dots reach between 5.5 and six inches (14-15 cm) in length.

They are not picky eaters but prefer more meat than veggies.

These fish are highly social and need regular contact with other species as well as a group of at least six, preferably 10, of their own.

Just do not pair them with slow-swimming, long-finned fish. 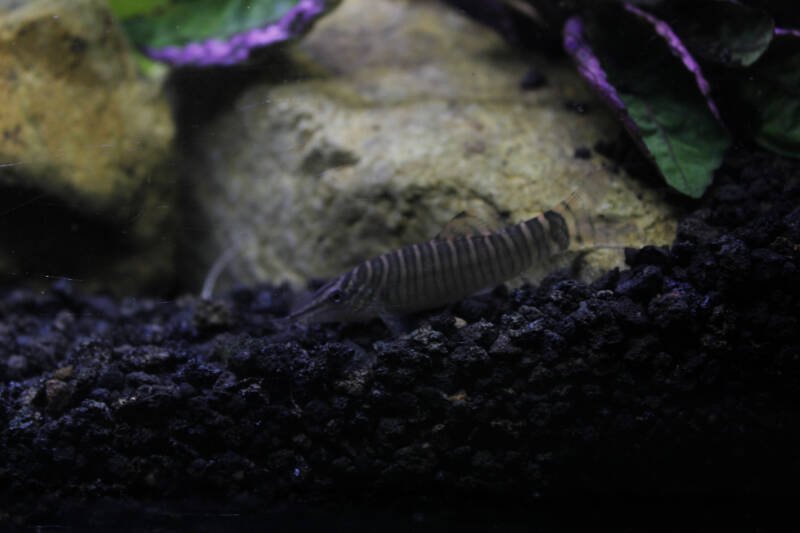 This elegantly colored species from the Ganges River is also known as the queen loach, scarf botia, or in general, the Indian loach.

Popular for their coloration, these fish have a golden base with eight to ten thick, black vertical bands.

They do well in a group but can be aggressive when establishing a hierarchy.

Bengals are nocturnally active and can pair with semi-aggressive species.

Do not pair them with slow-swimming, long-finned fish as the Bengal may nip at their fins. 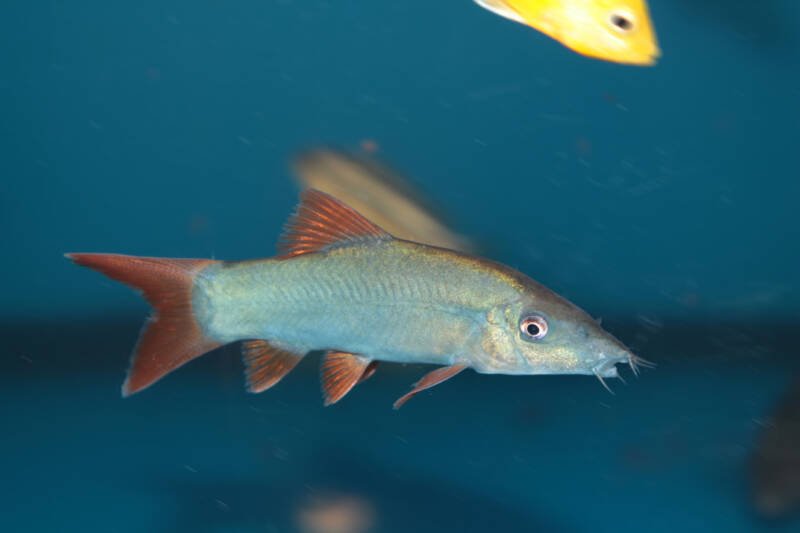 They have a blue-tinted body with orange, red, or yellow fins.

These omnivorous fish are nocturnally active and favor meaty foods, such as snails, crustaceans, and insects.

Keep these fish in a group of six to eight. Otherwise, they can become aggressive toward other species or with each other.

Orange-finned or blue loaches pair best with similarly sized, semi-aggressive species as their temper does not favor a tank full of peaceful fish.

What would a community tank be without a group of loaches?

Sinking nutritious foods; clean water; a good amount of swimming space; and a hiding spot along the tank bottom are about all you need to make them happy.

With their sleek shapes, varied patterns, and personalities, there is a loach out there to appeal to everyone.

What is your favorite loach species?

Tell us more about it below!