The ramshorn is a smaller species of freshwater aquarium snail most often considered a pest snail. These invertebrates often introduce themselves into a tank by hitching a ride on store-bought plants.

Adaptable and able to survive most conditions, this snail is not afraid to make its presence known.

If you ever find a ramshorn snail in your aquarium, chances are that a whole colony is soon to appear. 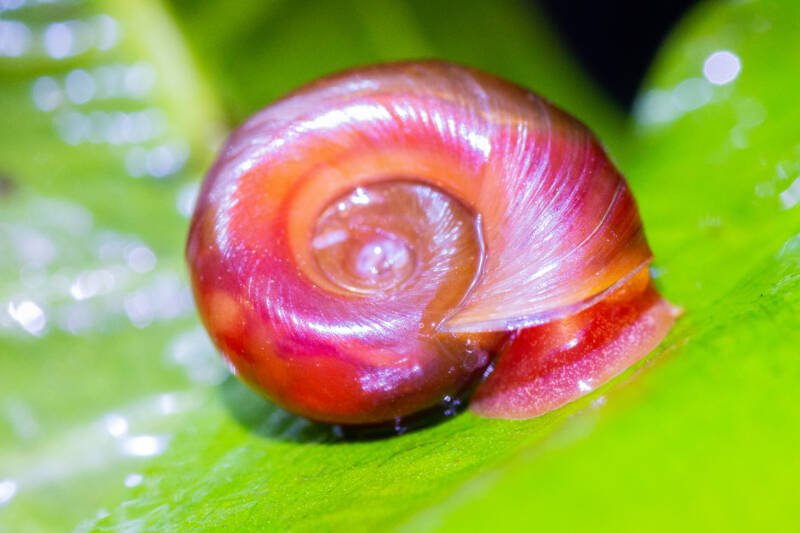 For those who are looking to start a colony of snails, this is the species for you. They breed fast, are easy to keep and come in a variety of colors.

Reputation aside, the ramshorn snail is a fascinating addition to any aquarium. 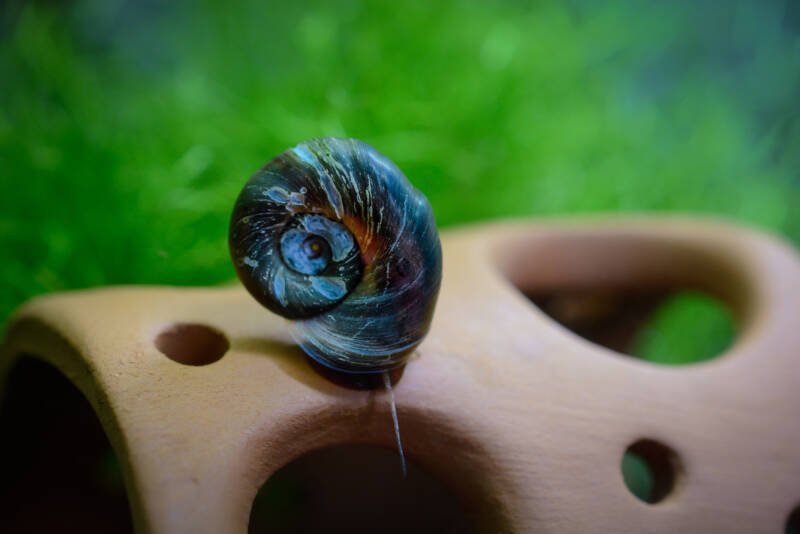 Ramshorn snails come in a variety of colors. Both the pink and blue varieties are the most sought after.

The other colors include orange, red, brown, and brown leopard. Pink, blue, and red ramshorns were bred for those colors. They are held in higher regard than the common brown ramshorns and tend to be more expensive. 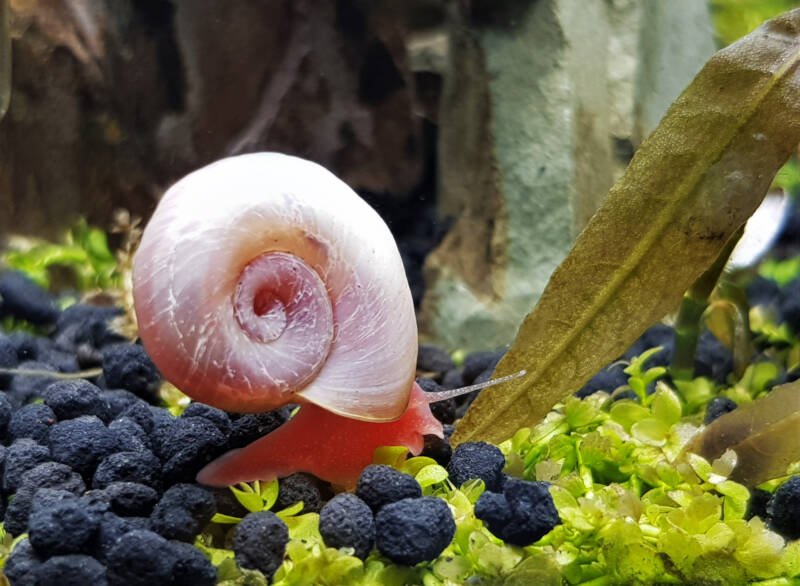 Brown ramshorns are most often the snails that accidentally end up in your tank.

They are the wild-type variation, meaning that they are the same color as wild snails. They run rampant through plant shipments and are never afraid to get a hold of some free real estate.

Typically, adult ramshorns max out at a size of half an inch (1.3 cm). Though with excellent care, some have been reported to reach a full inch (2.5 cm).

Freshly hatched ramshorn snails are so small they are nearly invisible. This is why they can be unknowingly transferred from tank to tank.

These snails do not have gills. Instead, they trap air underneath their shells. They hold this air in their shells and breathe it in as needed. Once their air supply gets low, they go up to the surface to collect more. 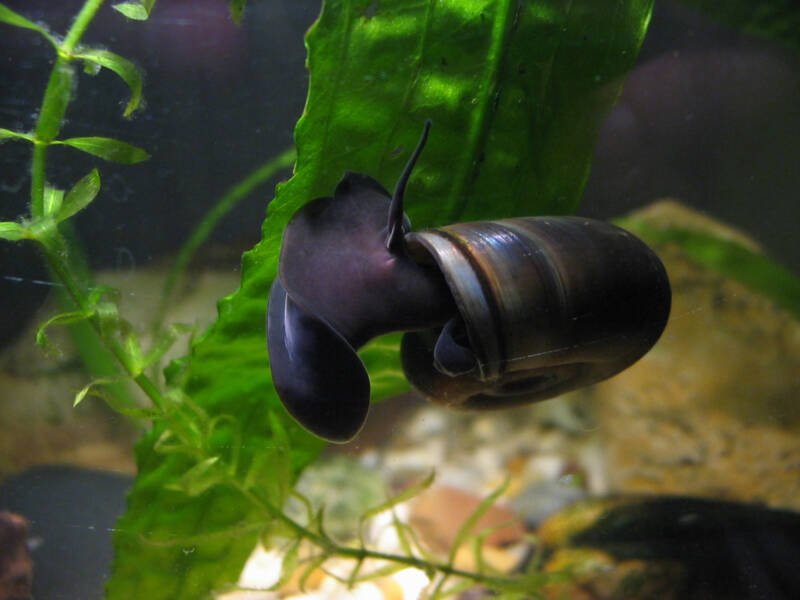 Ramshorn snails do not have a trap door or operculum for protection. Instead, they pull themselves up into their shells as far as they can. This can protect them from the average predators.

But some species, like pufferfish, can easily slurp them right out of their shell. This vulnerability is one reason why ramshorn snails are often used as feeder snails.

Ramshorn snails are very friendly. They will not harm any other fish or invertebrates. Yet, they are known to eat a few species of live plants when not provided with enough food.

They will crawl over anything, and anyone and have no concept of personal space. This can sometimes agitate more aggressive fish.

Since this species of snail is so small and vulnerable, it is not recommended to house them with large fish. Goldfish are notorious for eating anything that can fit in their mouth. So they pose a mighty risk to the ramshorn snail.

Other snail-eating species like pufferfish and crabs should also be avoided. Sometimes betta fish will nip at the long antenna, but most bettas will leave the snails alone.

Some excellent species that work well with ramshorns include: 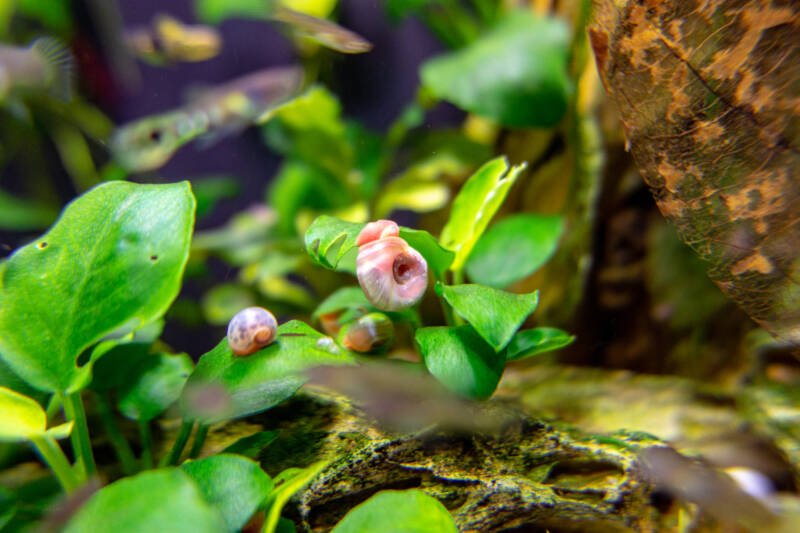 The recommended minimum tank size for the ramshorn is 5 gallons. Some aquarists suggest smaller aquariums are also suitable.

But like all snails, ramshorns produce a lot of waste, which requires a larger volume of water.

They are also prolific breeders. These snails will quickly overpopulate any sized tank if left unchecked.

Temperature-wise, these guys can tolerate a wide range. The reports vary on the exact range of temperatures, but 65-80℉ (18-27°C)

seems to be safe for the snail. Most keepers cohabitate ramshorns with tropical species. Thus, 72-80℉ (22-27°C) is a more common parameter.

Ramshorns do need a filter. Sponge filters are the safest option, though any type of filter will work just fine.

Because ramshorns are curious little devils, they can sometimes get caught in the filter intake. It may be necessary to cover the intake with a sponge or fine mesh.

To protect the health of the shell, it is best to avoid keeping ramshorns in acidic water. A basic pH of 7.0 is the lowest pH they should tolerate.

Adding extra sources of calcium can benefit the health of your snail if your pH is low. But the best way to ensure a healthy shell is to keep the pH levels between 7.5 and 8.5. 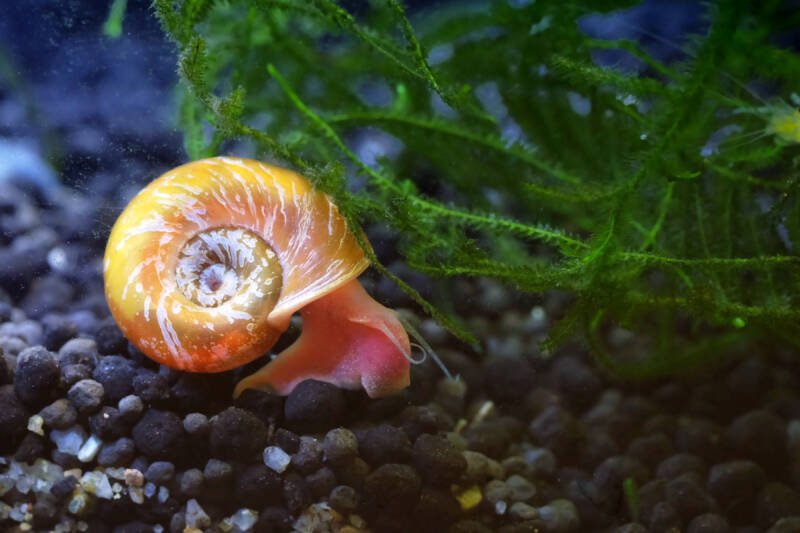 Both live and artificial plants can be used with this species. With live plants, the snails can feed on detritus or decaying plant matter.

Sand substrates can be used in ramshorn tanks, but gravel and rock would be better. It is difficult for ramshorns to adequately grip the sand and propel themselves forward.

Loose substrate combined with heavy shells can pose a hazard to the small snail. For this reason, heavier substrates like gravel and rock are best.

Bare bottom tanks, or a tank with no substrate, are also a good choice. Though one qualm about bare bottoms is that there is nowhere for the waste to hide. Your tank might need extra cleanings to keep the tank pristine.

Ramshorn snails do not require a light source. They are just as happy in low light as they are in ample light.

They may not need much light, but these curious snails do benefit from having multiple objects to climb and slither upon. Adding plenty of large rocks, driftwood, and artificial decor provides a source of enrichment and exercise.

Ramshorns are herbivores. Their main diet consists of detritus, algae, and plant matter.

It is a common practice to acquire ramshorns as a means of algae removal. Though ramshorns will have no problem keeping algae under control, it should not be their sole food source.

All of these foods combined will ensure that your snails have proper nutrition:

Being a hermaphroditic species, each ramshorn snail has male and female reproductive organs.

Though ramshorns are both male and female, they cannot self-fertilize. They still need to mate with another snail to produce offspring.

Now you may be wondering, “What’s the point of being multi sex if they still need a mate to procreate?”. The answer to that is as follows.

When single-sex organisms are looking to reproduce, they need to find a mate of the opposite sex.

But in the case of ramshorns snails, these guys can mate with any other member of their species. There’s no wasted time searching for the opposite sex. They can “do” as they please.

After two snails have copulated, the one holding the fertilized eggs will lay them. More often than not, these eggs will be laid on the underside of plants, on the tank walls, and on rocks and driftwood.

The eggs are translucent and sometimes difficult to see. Once laid, the eggs hatch in two weeks.

Newborn ramshorns are able to fend for themselves immediately upon hatching and need no extra care. 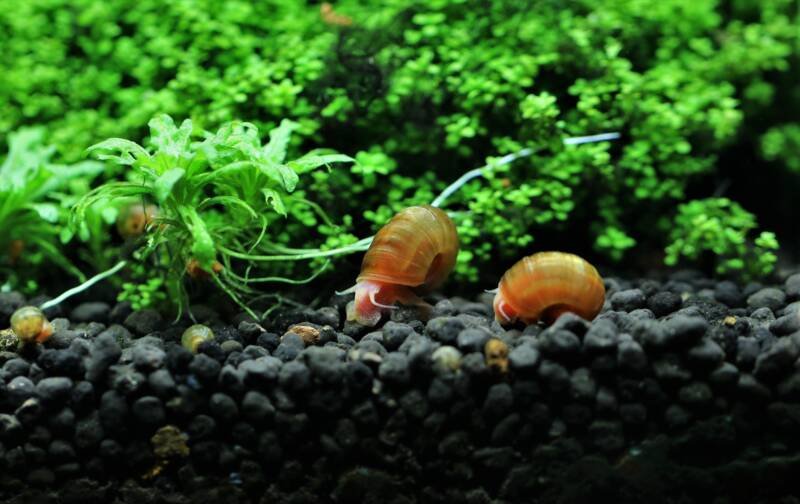 The most common problem aquarists have with ramshorns is overpopulation. It’s not always possible to rehome extra snails. So learning how to control the population is important.

Overfeeding ramshorn snails tends to be the main cause of overpopulation. These snails breed faster when food is abundant.

By simply limiting their food source, you can slow down their breeding.

Another way to control the population is by acquiring species that eat ramshorns. Puffers, loaches, crabs, and assassin snails are all species that munch on ramshorns.

With puffers, loaches, and crabs, it is best to not add them to your ramshorn tank. These species tend to gobble up every snail in sight and can actually kill the entire population.

Instead, having a separate tank for the predaceous species is a better option. This way, you can control how many snails are being eaten.

Assassin snails tend to slowly diminish the population. They do not feed as often as the other snail-eating species. They also only eat snails that are the same size as them or smaller.

If you have a healthy collection of ramshorns adding a few assassins will help keep the population under control.

Of course, not everybody has the resources to purchase other animals and the enclosures they may need. If this is the case, you can always sell your extra snails online.

On local online fish groups, you can usually find at least one person in need of feeder snails. Websites like Craigslist can also offer some relief.

The ever-versatile ramshorn snail is an underrated invertebrate. These hardy snails can be useful as feeders, algae cleaners, and as humble pets.

Do you have any questions, comments, or concerns? Shoot ‘em our way, and we’ll get back to you!