The convict cichlid is a freshwater fish that originated in Central America but has now been introduced to many other regions.

It is a popular species due to its bold, antisocial nature and is therefore quite expensive as a pet. In spite of this, it can be easy to care for. 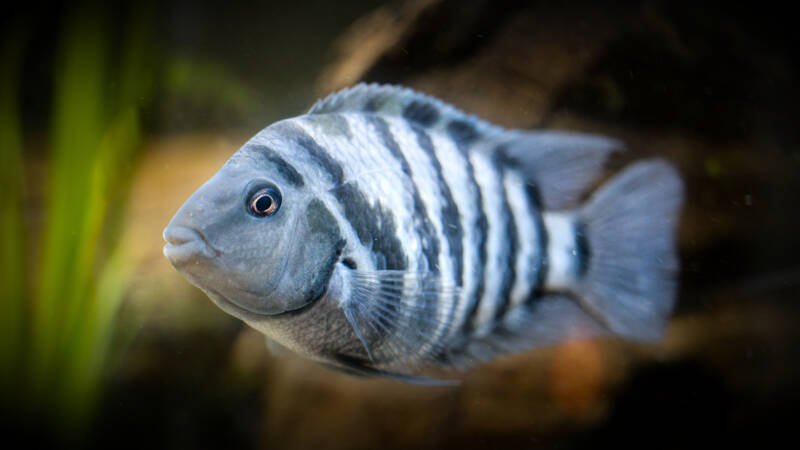 We will discuss the various convict cichlid varieties that are available in the aquarium trade, their natural habitat and requirements, expectation of life, general behavior in the aquarium, suitable tank mates and species they may not be most compatible with.

The convict cichlid (Amatitlania nigrofasciata) is a small fish native to the waters of Central America. 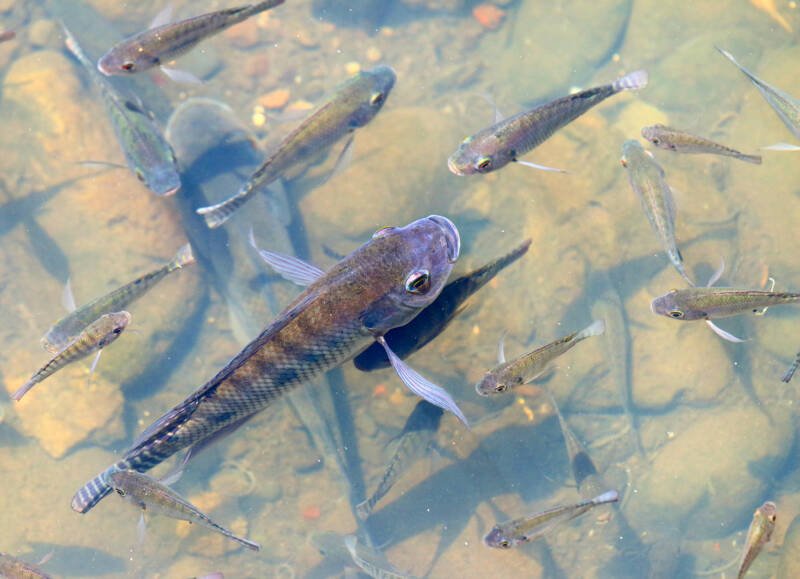 Different variations of the same species can also be found throughout the region, each with its own unique traits.

Their habitat consists of rocky areas with plenty of fallen wood where they can dart around into crevices for security.

Unsurprisingly, their iconic vertical bars act as camouflage against predators in their environment. 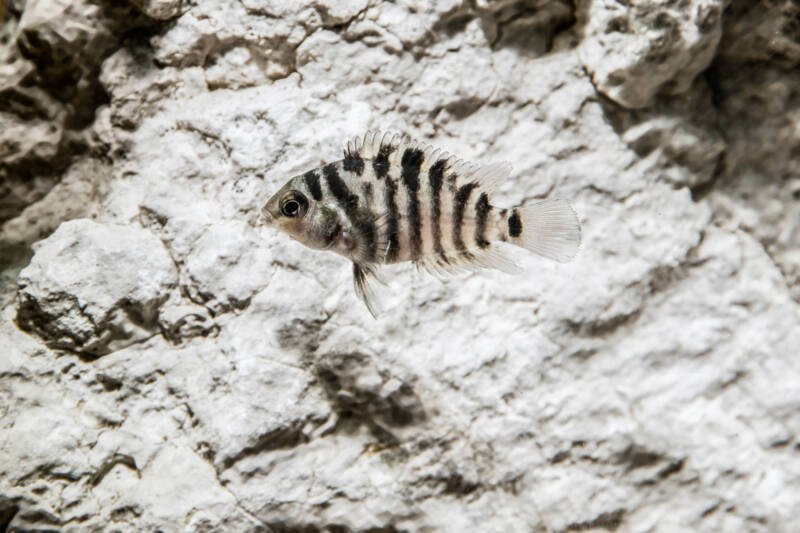 Like most cichlids, the convict cichlid is a very territorial fish that often displays aggressive behavior, especially towards fish that infringe on its territory.

Most individuals choose a small crevice or cave as their territory and defend it vehemently, even against much larger fishes.

They generally spend most of their time near or inside this territory, rarely venturing out except to feed.

The convict cichlid defends itself via a series of nips and charges aimed toward any fish that comes too near.

Most of the time, their larger-than-life territorial displays do work in chasing away intruders and predators. However, in cases where it does not work, they will be forced to give up their territory.

Interestingly, this behavior is part of the reason why they make such good parents. They will defend and nurture their young until they’re old enough to fend for themselves.

The convict cichlid is a small fish species that grows to a maximum of 6 inches (15 cm), making them good options for smaller aquariums. Males grow larger than females. 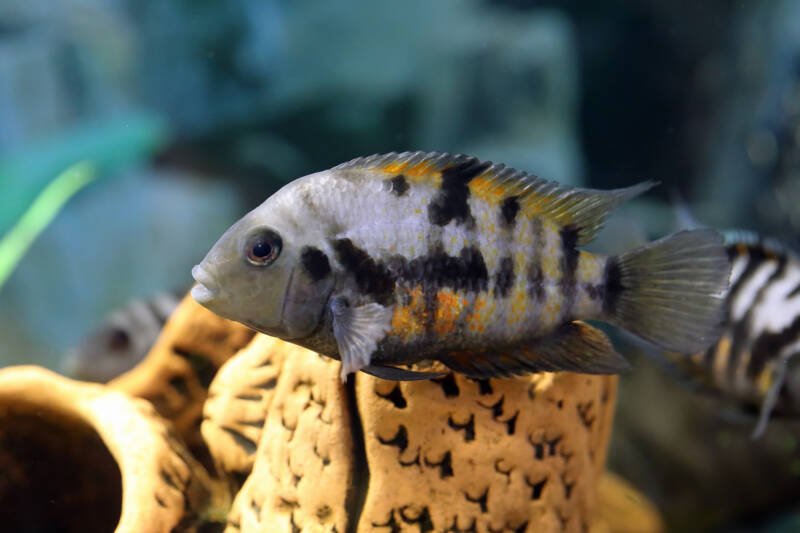 Most convict cichlids on the market today have a grey-blue base with vertical black stripes on their body.

They generally have eight or nine vertical bars evenly spaced across their bodies.

Their bars and coloration tend to intensify with age. Mature individuals often display the most striking colors and features.

However, through selective breeding, a wide range of different-colored convict cichlids is now available.

You can find them in white, gold, and pink varieties. Some of these varieties are a solid color, sporting no stripes at all.

Sexing them before sexual maturity is quite difficult, but it is a relatively easy task once they mature. Sexual maturity usually occurs at six months of age.

Females of this species tend to have brighter colors and be slightly smaller than males.

The males, on the other hand, will have much longer fins as compared to their female counterparts.

In the wild, their diet consists mainly of insect larvae, small invertebrates, small fishes, and even plant matter.

They are omnivores and are not fussy eaters – another great reason why they make such good pets.

It is easy to feed convict cichlids in the home aquarium as they will readily consume most commercially available pellet food.

But it is still important to occasionally supplement their diet with wet food such as frozen bloodworms, tubifex worms, or brine shrimp.

Home-prepared foods are also a great option if you want to give your fishes the best.

Since they are not picky, frozen cubes of blanched vegetables and fish meat make a great balanced diet for them.

We generally aim to feed our adult convict cichlids twice daily to keep them plump and healthy.

While they will readily consume more, it is best to feed them sparingly to reduce pollution in the tank.

Our rule of thumb is to feed them for as much as they can eat within three or four minutes. This reduces water pollution and will keep your fishes healthy. 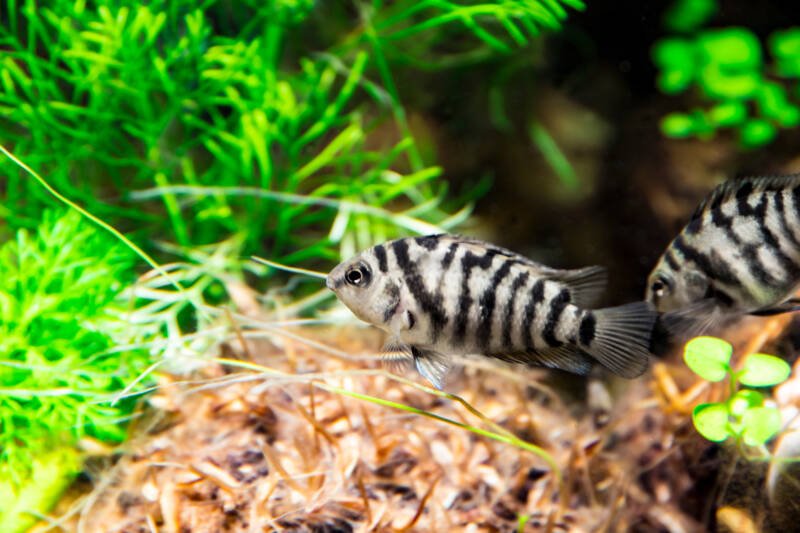 Usually, convict cichlids are kept in pairs. While single fish can do well in a small 20-gallon tank, pairs tend to fare better because they’ll be less stressed. For a pair of adults, a 30-gallon tank will suffice.

These fishes originate from warm waters. As such, a heater might be required if you reside in colder parts of the world.

As convict cichlids are hardy fishes, an overly robust filtration system is not necessary (as long as you keep up on your maintenance schedule). Some keepers even keep them in planted tanks without any filtration.

A gentle flow rate is preferred as they come from slow-flowing streams and lakes in the wild.

We usually opt for a hang-on-back filter (HOB) or a corner power filter to provide some form of flow.

However, it is important to note that these fishes are sensitive to high levels of ammonia. It is best to only introduce them into a tank that has already been well cycled!

Please note, the tank should not be bare. The convict cichlid often finds security in rock formations or crevices created by fallen logs.

It is important to create multiple hiding areas to choose from – especially if you are keeping several convict cichlids in the same tank.

As for the substrate, most owners opt to go for fine river sand, which creates a more naturalistic environment for the fish and aids in biological filtration. 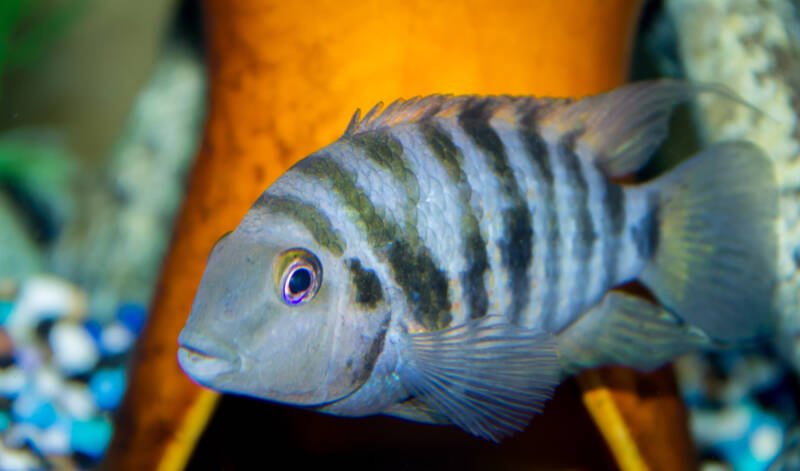 Keeping tank mates with convict cichlids can be tricky due to their aggressive tendencies, but it can be done successfully.

Understanding convict cichlids’ nature is much more important than the actual fish you intend to house with them.

Convict cichlids will eat smaller fish that stray too close, so guppies, small tetras,small rasboras like chili or dwarf are not suitable.

On the flip side, however, fishes that are too big will stress them out.

The best tank mates to have around convict cichlids are schooling species or fish of similar size and aggressive temperament.

Convict cichlids tend to keep to their own territory within the tank, so it makes sense to keep other fish that are territorial as well.

Of course, the tank should be big enough that their territories don’t overlap. Otherwise, you’re just asking for trouble.

Caring for the convict cichlid is very easy as they are a hardy species and rarely create problems.

As mentioned earlier, they are voracious eaters and will consume almost anything you throw at them.

For the most part, feeding twice daily will suffice. We feed our fishes with a mix of both pellets and wet food.

Generally, we complement their diet with food items such as bloodworms and frozen brine shrimp to stimulate their digestive systems.

Maintenance-wise, a weekly water change should be performed to keep excess nutrients at bay. There are no special requirements for these fishes, and regular water changes will keep them healthy.

This species of fish rarely falls ill, making them a popular choice for beginners. However, there are a few important illnesses to watch out for.

Ich is a common disease to which cichlids species are quite susceptible. It is caused by a parasite that manifests itself in the form of white specks all over the fish’s body.

Ich is usually caused by bad husbandry techniques, such as failing to perform regular water changes or introducing a fish from already-infected waters.

Ich is a very contagious disease but is easily preventable and curable if treated early. There are many medications available on the market today that will do an effective job at curing ich.

Digestion issues are also relatively common with cichlids. Impaction and bloating are the most common. These issues are caused by overeating or eating only dried food for too long.

Fortunately, digestion issues are easily prevented and cured if keepers vary the diets of their fish.

As we mentioned earlier, the introduction of wet food items such as worms and brine shrimp regularly will prevent digestive issues.

Convict cichlids are notorious for being prolific breeders. A sexually mature pair in a tank will almost always breed.

The simplicity of the process often makes them the first species that keepers start breeding.

Cichlids may be known for their fecundity, but breeding them in captivity does require a few parameters to be met first.

The females prefer to lay their eggs on a flat surface or a surface in their caves. It’s best to provide these things beforehand to ensure a successful spawn.

The tank should also be big enough (40-50 gallons) for the pair to roam around and should offer multiple hiding spaces. This will give the female a chance to retreat from the male’s advances if needed.

Convict cichlids tend to breed better if the tank is undisturbed by other fish. Hence, it will be best if your breeding tank only contains one pair.

Convict cichlids spawn multiple times throughout the year, and there is no set season during which they will breed. Males will court the females, and they will form a bonded pair.

Once the tank and both fish are ready, the male will often be seen chasing the female in an attempt to court her. This is normal behavior.

However, if the female appears to be in constant distress, it might be a good idea to remove her from the tank and put her back in after a few days.

Spawning generally happens in their hideout at dusk or dawn.

Males will fertilize the eggs externally as the female is laying them.

The eggs usually hatch at the four-day mark and can be found swimming close to their parents. The pair will closely guard the fry.

Males should be removed at the five- to six-day mark as they can begin acting aggressively towards the fry. The mother can be left to care for the young on her own.

You will need to start feeding the fry from day five onwards. We usually start with a culture of infusoria or baby brine shrimp.

At two weeks of age, the mother can be removed, and the fry can be started on larger food items such as adult brine shrimp. At this age, they will only take live foods.

At one month of age, they are essentially small copies of their parents and can be started on dried food.

Since there is no set season to breed these fishes, a little patience may be necessary once all the parameters have been met.

Fiddling around with the tank is often counterproductive since it causes stress to the fishes.

Always make sure that both the male and female have ample hiding space around the tank to feel secure.