If you’re looking for a snail to keep your tank clean and algae free, the strictly carnivorous assassin snail may not be the choice for you.

The assassin snail (Anentome helena) has become popular in the aquarium trade not for their algae cleaning abilities but for their hungry desire to keep pest snail populations under control. 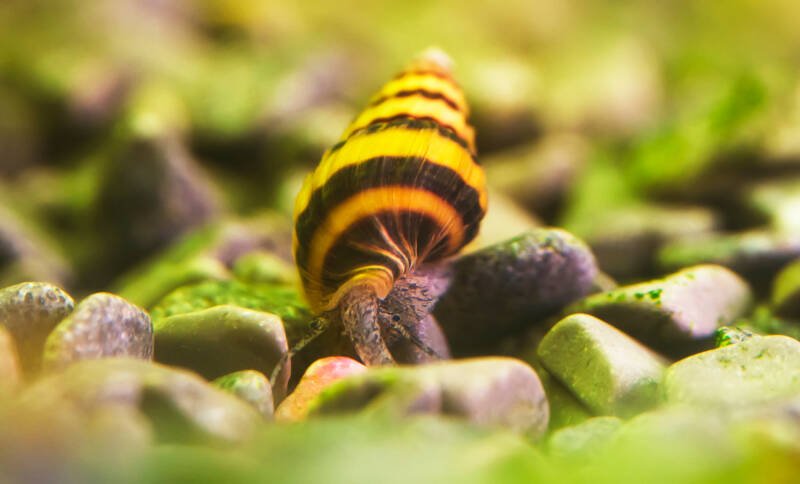 Not to mention, their neat shell patterns add an interesting addition to many aquarium setups.

These freshwater snails are not too difficult to care for as long as they are well-fed and water quality is maintained.

They’re an easy aquatic invertebrate, good for beginners, and play a practical role in your aquarium’s community.

Here we’ll cover care and considerations for how to keep your assassin snails happy and healthy!

These freshwater snails are native to Southeast Asia. They can be found living in the tropical, slow-moving waters of lakes and rivers throughout Malaysia, Thailand, and Indonesia.

They spend much of their time burrowed in the soft, sandy substrate of their habitat.

Sitting atop the sand in these lakes and rivers are rocks, plants, and debris that form miniature caves for the snails to seek safety. 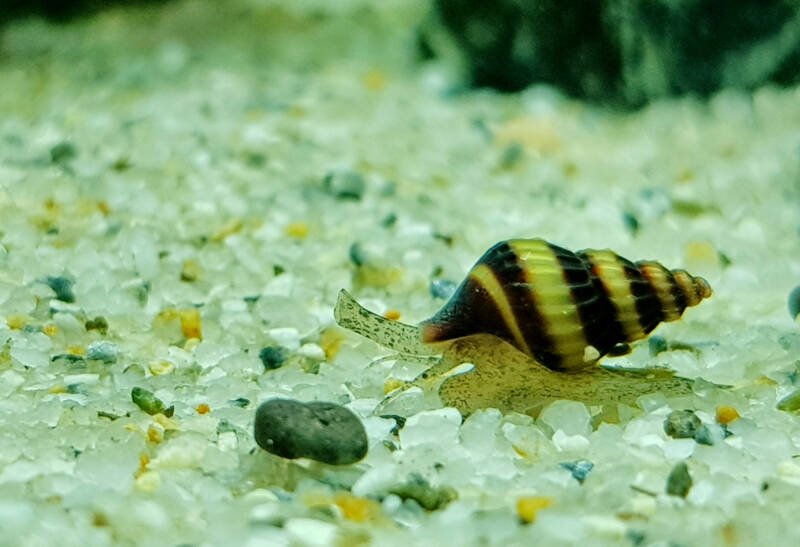 Assassin snails have a golden, cone-shaped shell with a dark band wrapping from the aperture to the apex. Because of this coloration, you’ll sometimes hear them referred to as bumblebee snails.

They’ll have two short tentacles fixed to their head, with an eye on the end of each.

These snails will navigate through their environment by contracting their muscular foot.

Assassin Snails are equipped with an operculum, a structure that acts as a trap door to close its shell when the snail is inside.

This is a protective mechanism, and the assassin snail preys on other snails that aren’t equipped with this trapdoor feature (more on this later).

They tend to be larger when found in the wild than those bred and kept in captivity.

In the aquarium, these snails are typically found between ¾ – 1” long, but they can grow upwards of 3” in the right conditions.

On average, assassin snails live between two and three years. 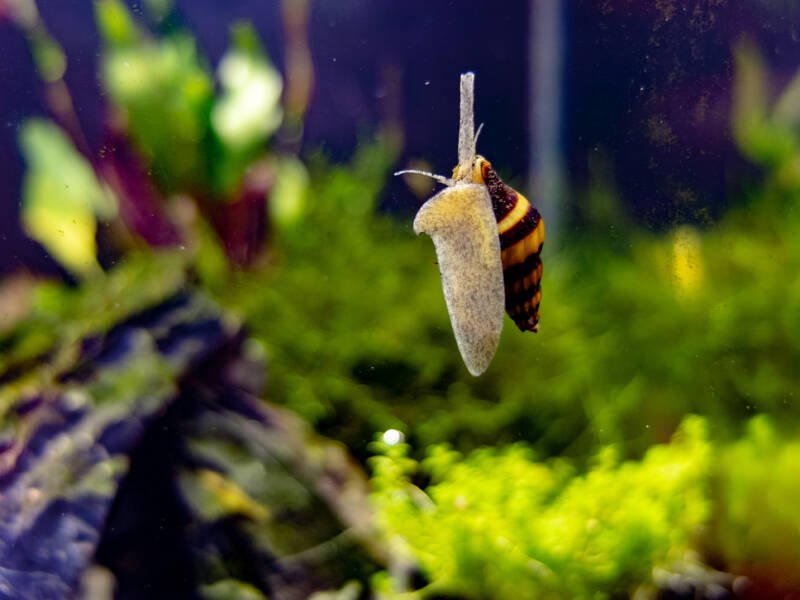 Assassin snails are slow movers, typically feeding at night and more dormant during the day.

Healthy snails will generally be active and can be found affixed to aquarium glass and decorations.

Although they’re kept in groups, these snails are relatively solitary creatures.

These snails are fully capable of keeping themselves safe from small predators. When vulnerable, these snails have the ability to withdrawal into their shells, sealing it shut with the operculum.

Assassin snails are not particularly aggressive and will leave most fish alone.

However, any slow-moving animals that are of size may be looked at as prey.

They spend a lot of time buried in the substrate, where they wait for prey to move above them. 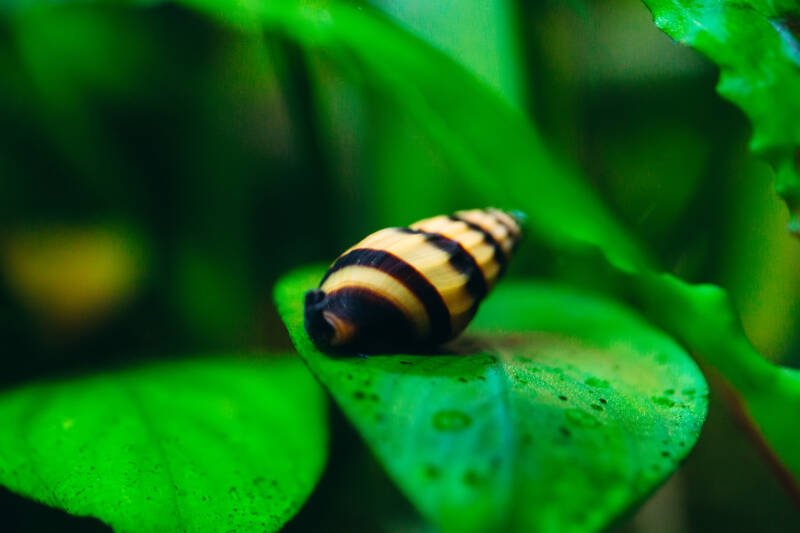 A minimum of a 30-gallon tank is needed for your assassin snails.

They are typically kept in groups of at least 5 or 6, with 2 snails for every 5 gallons. However, they tend to do just fine on their own as well.

Start your tank set up with a soft, sandy substrate that’s loose; this will be important for their burrowing behaviors.

Rocks can be added and arranged to create overhangs and mimic caves.

You can optionally add décor or driftwood; the snails will use this for climbing or possibly to attach eggs to during breeding.

Assassin snails will coexist with live plants. These carnivores won’t snack on plants nor will they use them for refuge.

Since they won’t destroy your plants, they are a good snail species to keep with your planted communities.

Pest snails may also enter an aquarium via live plants and thus provide food for the assassin snails.

You’ll want to mimic the warm waters of their natural habitat, keeping temperatures between 75-80°F (24-27°C).

A good filter and heater are needed to maintain these ideal conditions. Be mindful, though, significant shifts to cooler temperatures can lead to health issues such as shell problems and death.

Be sure only to add your snails to fully cycled aquarium systems.

You’ll want to invest in a good, effective filter. Water flow should remain moderate; your filter should create enough current.

Lighting also doesn’t have to be too particular; these snails will do well with any lights.

Finally, your tank setup should include a cover to prevent escapees.

You may also want to cover power filters with a sponge pre-filter as they can get trapped and injured in filter slats.

Harder water is important for healthy shell development in assassin snails. For these reasons, water hardness should be kept remain on the hard side for shell health and growth, around 8-15 dGH.

You can keep nitrate levels in your tank low with water changes every 1-2 weeks. 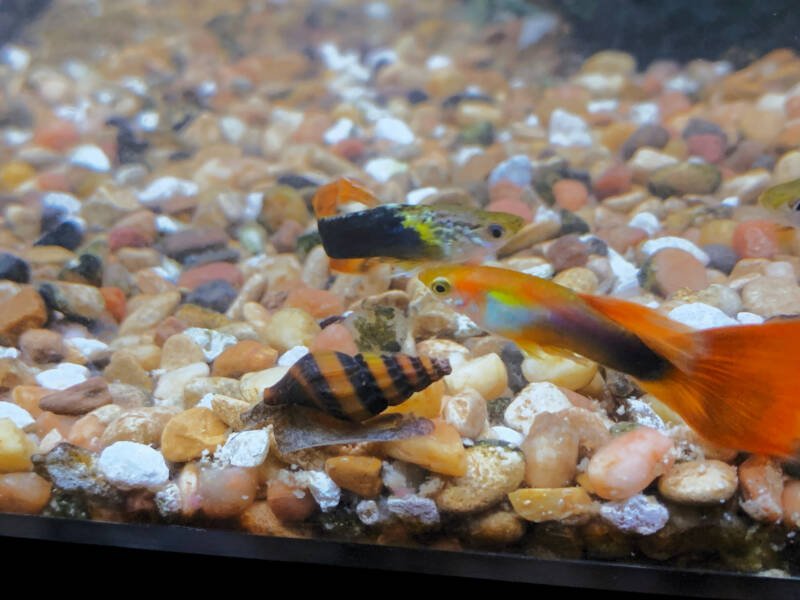 Assassin Snails will hardly pay attention to any fish in their environment, so you can add almost anything you’d like with your snails.

The thing to be aware of is fish that may eat your snails. The most dangerous fish to assassin snails are bottom-dwellers, so any fish living in the tank’s lower levels should be peaceful scavengers.

Good options include the corydoras or otocinclus catfish.

Avoid overall aggressive fish such as some cichlids, crayfish.

Your snails will fare just fine with most community fish. Cherry barbs, tetras, rainbowfish, angelfish, mollies, platies, and guppies are all compatible.

Nerite snails that are the same size or bigger are fine cohabitants as well.

If you like to mix your assassins with invertebrates, keep them with larger freshwater shrimp, such as Amano, bamboo, vampire, and ghost shrimp.

These carnivores feed on other freshwater snails. They’ve become popular in the aquarium trade thanks to their abilities to keep pest snails at bay. They bury in the substrate and wait for their prey to move over them.

They seem to particularly enjoy trumpet snails, a common pest. Assassin snails will go after snails without an operculum, the covering that helps seal off its own shell.

They’ll also eat the soft eggs of other snails, but not the eggs of nerite snails!

You may also try to supplement their diet with fish flakes, bloodworms, or brine shrimp. Regardless, smaller, freshwater snails seem to be the favorite food of the assassins.

With this snail species, you won’t have to worry too much about overfeeding. They eat slowly and tend to pace themselves.

You can supply a good-sized feeder snail population and allow the assassins to feed on them over time. 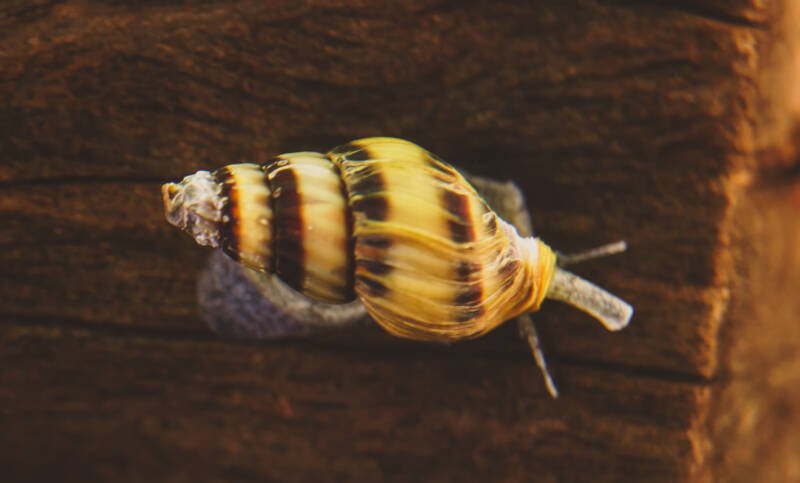 Assassin snails breed pretty readily in captivity, so you shouldn’t run into many issues growing your population.

Your best chance to induce breeding is to start with a properly sized group, about 6 or more individuals.

Assassin snails will pick their mating partner and wander around the aquarium together for around 12 hours before breeding.

This behavior can be easily observed; you’ll see one stuck to the other as they move.

Once they’ve mated, females lay one egg at a time, fixing them to plants, décor, or aquarium glass.

The yellowish eggs can be typically be found close to each other.

After a few days, the eggs will go from yellow to a light brown color. The eggs will hatch in about two months.

The snail hatchlings will spend the first six months of their lives buried and sheltered in the sand until they reach maturity.

Many other snails and members of the class Gastropoda are hermaphroditic, however assassin snails are not.

While they do have defined genders, it’s nearly impossible to distinguish male from female.

The shell of the assassin snail can be affected by several issues. One thing to keep an eye out for are parasites.

You’ll want to look out for white spots appearing across their shells. This may be a parasite latched on the outside.

Parasites can be difficult to treat. It’s best to remove afflicted individuals away from the general population.

Maintaining excellent water quality is the best way to keep your snails healthy.

Like most invertebrates, assassins are incredibly sensitive to copper. Be mindful not to use food pellets or medications containing copper.

The assassin snail can easily be added to an existing tank as long as there’s a sandy substrate and they’re compatible with their tank mates.

With good tank conditions and plenty of food availability, these snails will stay free from illness and live full lives.

Overall, these are an easier snail species to care for, suitable for anyone hobbyist, beginner to advanced.

Despite being small, these snails will have a big presence in your tank. When purchasing your assassin snails, you can expect to pay about $2 per snail.

If you have additional questions about caring for your assassin snail or comments and suggestions on our care guide, please feel free to reach out.

We’d love to hear about your experiences with assassin snails!