The Odessa barb (Pethia padamya), also known as the scarlet barb, is a beautiful freshwater fish.

The males’ bright red stripe crossing under a black mesh of scales makes them look as though they are glowing from within!

Easy to care for and peaceful, this fish allows the beginner to have a thriving community tank.

The Odessa barb originates from freshwater ponds and rivers in Southeast Asia, particularly in central Myanmar.

These waters are slightly acidic, with plentiful vegetation and a moderate current.

There is no doubt – the Odessa barb has a striking look! The males sport the most brilliant colors, while the females’ coloration is more subdued.

Both sexes have a black, mesh-like pattern to their scales. The fish have sturdy, angled fins and a forked tail.

Males are silver-colored in the body, with a thick, bright red line extending from behind the eye all the way to the tail fin.

This line is punctuated with two vertical, black spots: one behind the gills and the other at the base of the tail. Black streaks along the rays accent their fins.

Females are silver in color, with a slight pink or golden hue. They lack the brilliant red line that the males have but share similar black spots on their bodies and fins.

Females also tend to be larger than males, especially when they are carrying eggs.

You can expect your fully-grown Odessa barb to reach a length of about three inches (7.6 cm). Again, the males may be slightly smaller than the females.

The lifespan range for Odessa barb is three to five years. As always, proper care impacts the lifespan of your fish.

Here’s where things get fun! The Odessa barb is not only beautiful to look at; they are also very active and fun to watch!

They are shoaling fish, which means they like to stick together in the tank most of the time.

But they also love to explore, and you will find them checking out all the levels and objects in your tank.

Not only are they wonderfully active, but they are also relatively peaceful.

Every now and then, you may see some aggression among male barbs seeking to establish dominance. These interactions are usually short-lived.

If the aggression persists, you may have to remove the weaker fish. They tolerate other species but may nip at the fins of slower moving fish.

Keep your Odessa barbs in a group of at least five. This may minimize any aggressive behaviors as it increases their comfort level. 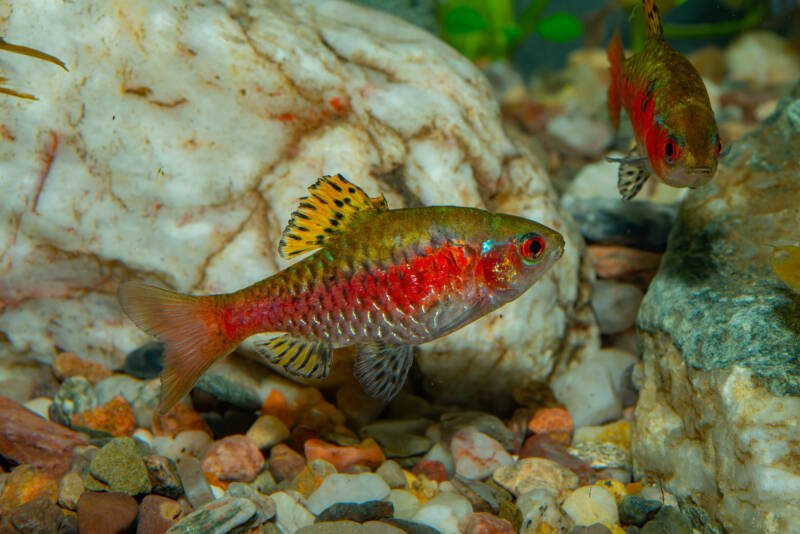 A 10-gallon tank is sufficient for a single fish. As we have said, Odessa barbs do better in a group of at least five, so for this setup, plan on a minimum tank size of 30-gallons.

Because this fish is very active and loves to swim, an even larger tank would be better.

In consideration of their natural habitat, Odessa barbs do best in well-planted tanks. 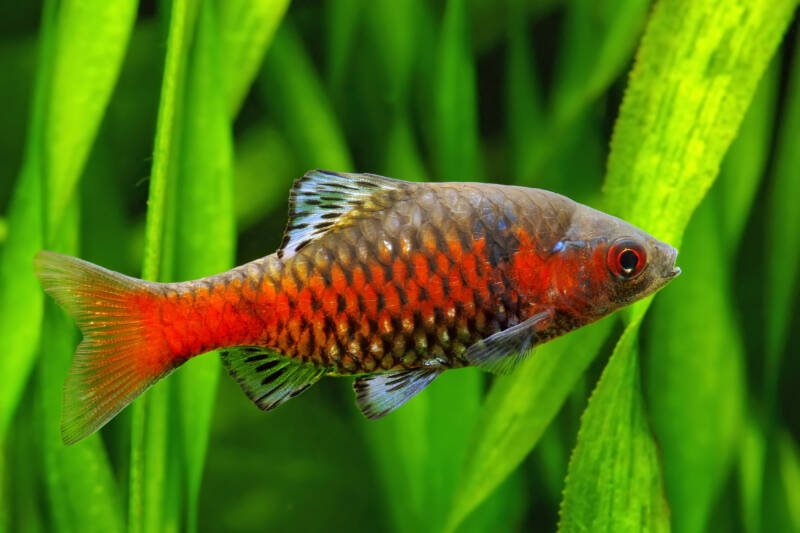 Some suggestions for live plants are hornwort or water wisteria, but you can try any type that suits you.

Arrange the plants so that your fish have plenty of swimming room to accommodate their high activity levels.

Because the fish explore all tank levels, include rocks or driftwood on the tank bottom for them to enjoy.

Odessa barbs can tolerate a range of water parameters, but keep the conditions are consistent to ensure your fish’s health.

They prefer slightly acidic water, at a pH level of 6 to 7. Water hardness should be moderate and in the range of 4 to 10 KH.

Keep the water temperature between 70 to 79 degrees Fahrenheit (21 to 26 degrees C) and test your water regularly.

Install a filter with moderate to high filtration to allow for sufficient water movement.

These fish prefer lower lighting, so either use a lower power tank light or consider adding floating plants to diffuse the light.

You can introduce your Odessa barbs into a community tank with a variety of other fish, and they will get along just fine.

Consider the following to pair with your Odessa barb:

Odessa barbs are omnivores. While they can thrive on quality commercial flake foods, they will be healthiest with a varied diet that includes freeze-dried and live foods.

Supplement your fish’s diet with the following nutrient-rich foods:

Feed your fish twice per day and only as much as they can finish in a few minutes.

Odessa barbs are an egg scattering species. As such, breeding in a community tank may not be successful.

Setting up a separate tank may increase your odds of success.

While some recommend setting up a bare bottom tank, others suggest keeping the tank well planted.

A two-to-one ratio of females to males may further your chances of breeding.

Mating pairs will form. Slightly lower the pH of the water to encourage egg dropping and fertilization.

The females will then scatter the eggs while the male fertilizes them. Once this is done, remove the adults from the tank. The eggs should hatch in three to five days.

Change part of the water daily while the fry are growing. Feed the fry infusoria for the first few weeks.

After that, they should be grown enough to accept larger foods like baby brine shrimp.

This species is hardy and is not prone to any unique diseases. As freshwater fish, they are susceptible to typical tank diseases.

Ich, which presents as white spots, is a common one. Correct any necessary tank conditions and add appropriate medication to the water.

It is important to recognize common freshwater ailments and treat them quickly. Ich can eventually kill your fish if not treated.

Typically, no. Odessa barbs are notable for their peaceful nature. Occasional scuffles for dominance can break out among male Odessas.

They can tend to nip at slower-moving fish with long fins. Keeping Odessa barbs in a group of at least five can lessen the chances of this happening.

How do you breed Odessa barbs?

At a quick glance, breeding Odessa barbs is simple. Male and female are visually easy to distinguish.

Prepare a separate breeding tank and remove the adults after egg spawning and fertilization are complete.

The Odessa barb is an excellent fish for someone new to tank keeping.

They are peaceful, easy to care for, tolerant of a range of tank conditions, and not particularly prone to disease.

Expect to pay between $4 to $7 per fish for an Odessa barb. Remember that it is best to purchase a group of at least five to allow them to shoal.

Have you introduced a group of Odessa barbs to your community tank?