The neon tetra (Paracheirodon innesi) is a tropical schooling fish perfect for individuals that are new to the fishkeeping hobby.

Neon tetras are a member of the Characidae family, which contains many of the popular species seen in the aquarium trade today.

These little gems are hardy and fairly easy to care for. The blue and red streaks that appear on this South American species add an attractive splash of color to any aquarium. 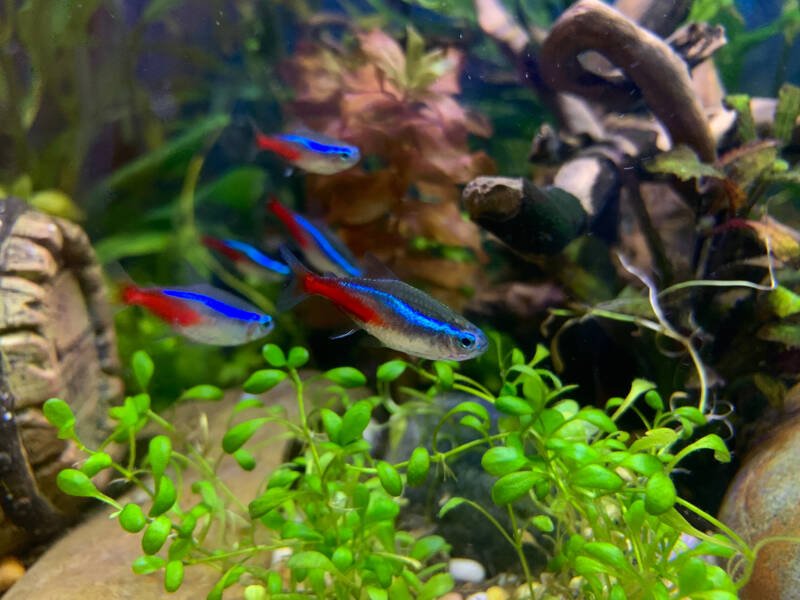 These waters are primarily blackwater, stained a dark brown color by the slow release of tannins from decaying wood and plant matter.

Tannins also raise the water’s acidity, lowering the pH level and providing a natural antibiotic to ailing fish. These rivers are most often underneath a dense canopy of trees, again providing a dark habitat to the fish.

Like most other species of tetra, wild neon tetras spend their days primarily in the middle water column feeding on the small worms and crustaceans that can be found there.

When first discovered, neon tetras were wild-caught and then distributed to fish stores around the world.

Now most, if not all, of them are captive bred. The popularity of captive breeding is a welcome practice for the wild neon tetra, as habitat destruction continues to threaten their populations and their livelihood. 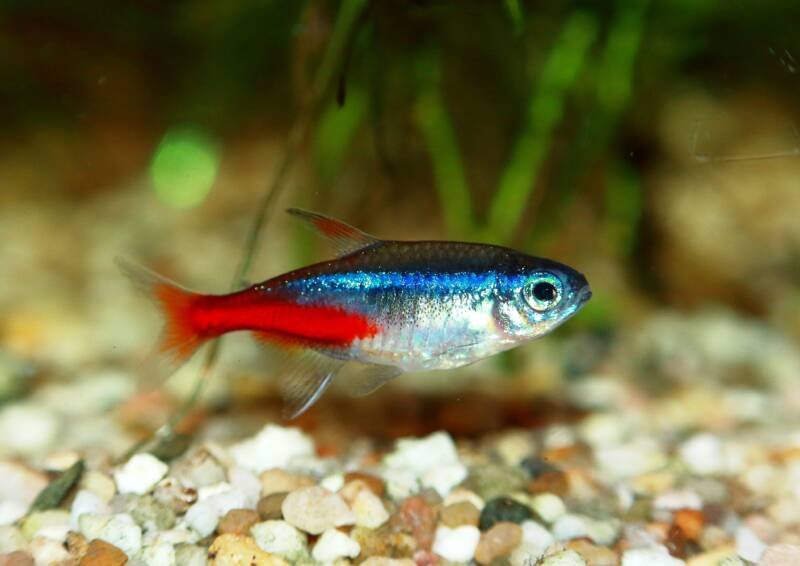 The vibrancy and small size of the neon tetra are what make this species so sought after.

The base color of the body is a grayish pigment, with the underbelly being a bright white.

Neon tetras have two stripes along each side. One is a neon blue stripe that starts at the eye and continues down to the base of the tail.

Directly under that is a deep red stripe, which is parallel to the red but limited to the second half or tail region of the fish.

The only parts of the body that remain uncolored and translucent are the dorsal, pectoral, pelvic, and tail fins.

This tetra is usually just under an inch at the point of purchase since they are most often juveniles.

Yet, once they’ve had some time to age and grow, they usually max out at 1.5 inches (3.8 cm). Their small size makes them a good fit for nano aquariums.

Thanks to selective breeding, there are now several variants of the species.

Long-finned, yellow, and green neon tetras are available, though not commonly found in your local fish shop.

You may have to find breeders in your area if you want to attain these special varieties.

Neon tetras can easily be mistaken for the similarly colored cardinal tetra.

To distinguish one from another, all you need to do is note the position of the red stripe.

Below is an image of a cardinal tetra swimming with a group of neon tetras! Can you spot the difference between the species? 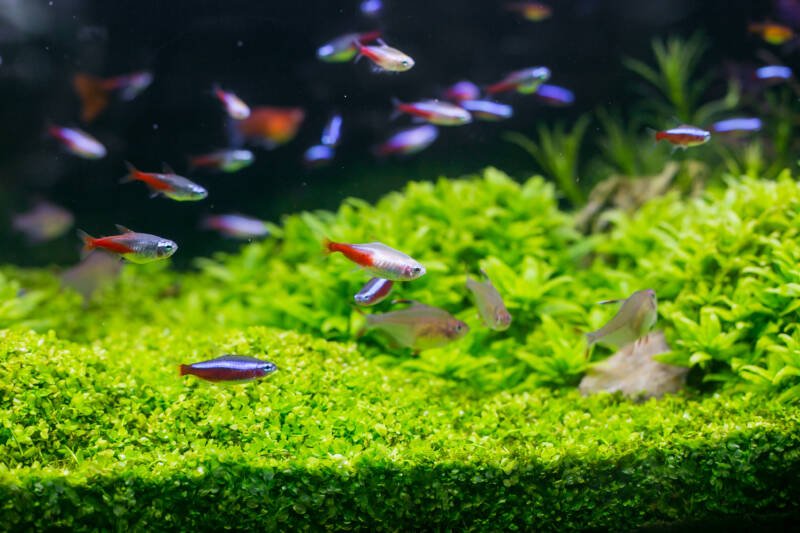 Neon tetras are a non-aggressive fish. Unlike some species, neons do very well with highly active tankmates.

A busy tank does not bother them much as long as their school is large enough to keep them confident. These fish school tightly, and are rarely seen by themselves.

If you happen to see one of your neons separating itself from the rest of the pack, it may indicate that the fish has an underlying illness that needs to be addressed.

Sometimes they have been known to nip at slower moving fish with large fins or appendages like bettas and angelfish, and thus should not be housed with those species.

It is also advised to avoid housing them with larger, more aggressive species like cichlids and the larger species of gourami. Keep this in mind when stocking a community aquarium.

Good tank mates for neon tetras include other tetras, rasboras, barbs, small catfish like corydoras, and smaller gourami such as the dwarf gourami. 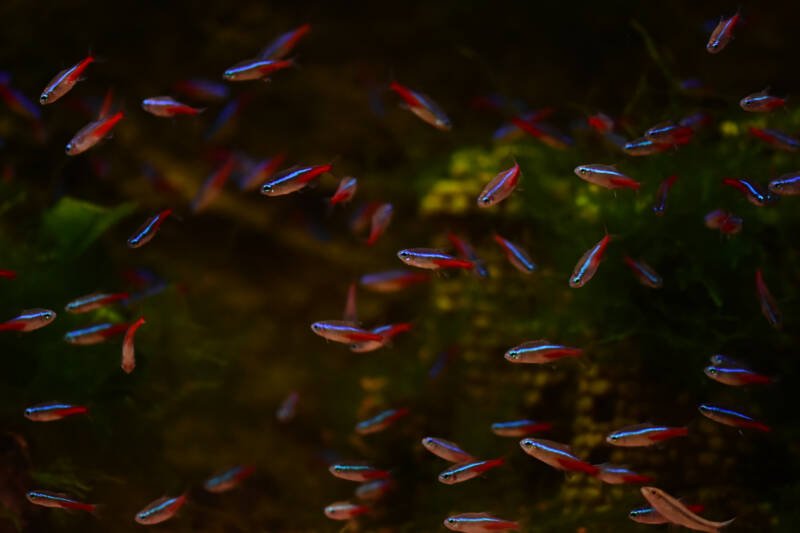 Many people who are inexperienced with the neon tetra say that 10 (40 l), or even 5 gallons (20l) are enough room for them. This is incorrect.

A good school consists of about a dozen members for a tank this size.

A blackwater tank is recommended and can be achieved by adding botanicals like driftwood, Indian almond leaves, alder cones, and seed pods.

You can make your own blackwater by boiling the appropriate wood or leaves, chilling it, then adding it to your tank after the water changes.

Commercial blackwater extract can also be purchased. Be careful to gradually introduce tannins into your tank, as a sudden shift in parameters can shock your fish.

Though not as ideal, neon tetras also do well in clearwater tanks as long as the pH is low and the lights are not too strong. 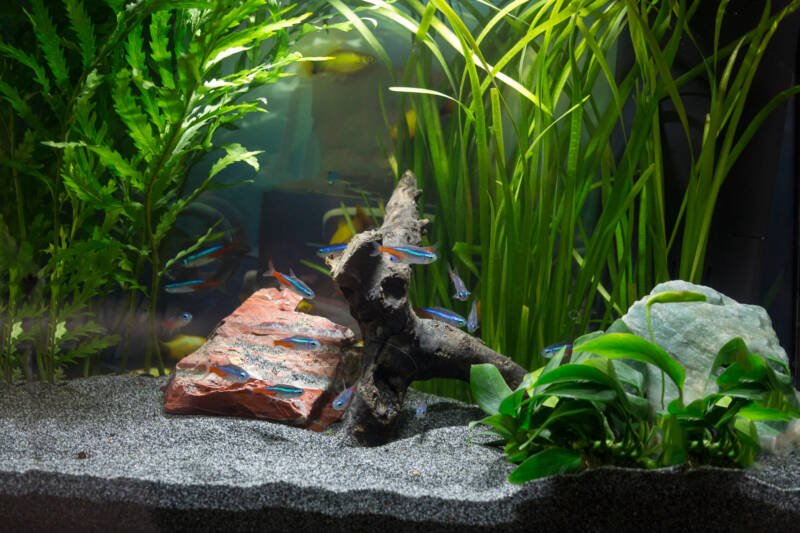 Since the natural habitat of these fish is dense and dark, their aquarium should match. Plenty of plant cover or driftwood is a must.

Fine with slow or moderate water flow, any filter appropriate for the tank size will work well.

Sponge filters would be a good choice for this species. They are gentle on your fish and your wallet!

I recommend using a Huijukon brand filter paired with a Tetra brand air pump, both of which can be found on Amazon. Finding sponge filters in-store is usually impossible, so your best option is to order one online.

Being an omnivorous fish, neon tetras have a varied diet.

As stated above, these fish primarily feed on small worms and crustaceans in the wild.

This can be replicated by providing some live options like daphnia, brine shrimp, small bloodworms, tubifex worms, and mosquito larvae (captive raised). Freeze-dried variants are acceptable as well.

Pellet and flake foods suitable for tropical fish should also be part of their diet.

All three of these foods are made of quality ingredients, reasonably priced, and can be found in most pet stores as well as online.

Sexing neon tetras is no easy task. Both genders of this species look remarkably similar.

The key differentiation here is the shape of the belly and the curvature of the blue stripe that runs down the sides of this animal.

Females have a more pronounced belly shape, which produces a slight curve in the blue stripe. Males, with their smaller abdomen, have a straighter blue line.

Observe the difference in the two sexes above and below. As you can see, the female’s stripe swerves while the male’s stripe remains relatively level.

Breeding this species can be tricky.

Perfect water parameters are needed to induce spawning and keep the fry healthy. Ammonia, nitrites, and nitrates should all be at 0.

A high level of acidity is important as well. Any pH around 6.0 or lower should do the trick and provide the correct environment to encourage the fish to “do the deed.” You can check our guide about natural pH control.

To prepare your tank for breeding, several preparations need to be done. If you haven’t done so already, cover the sides of your aquarium with a dark background. This will mimic the darkness of their natural environment.

A secure fitting lid will also be needed as these fish are known to jump more during spawning.

It is also recommended to have a separate tank for breeding, as the adults will most definitely try to eat their eggs after they are laid.

Newborn fry are nearly microscopic and vulnerable to being sucked into the filter input. Therefore, a sponge filter is the best option to place in a breeding tank.

If you are unable to acquire a sponge filter, you can modify your current filter by placing fine mesh or aquarium sponge over the intake. 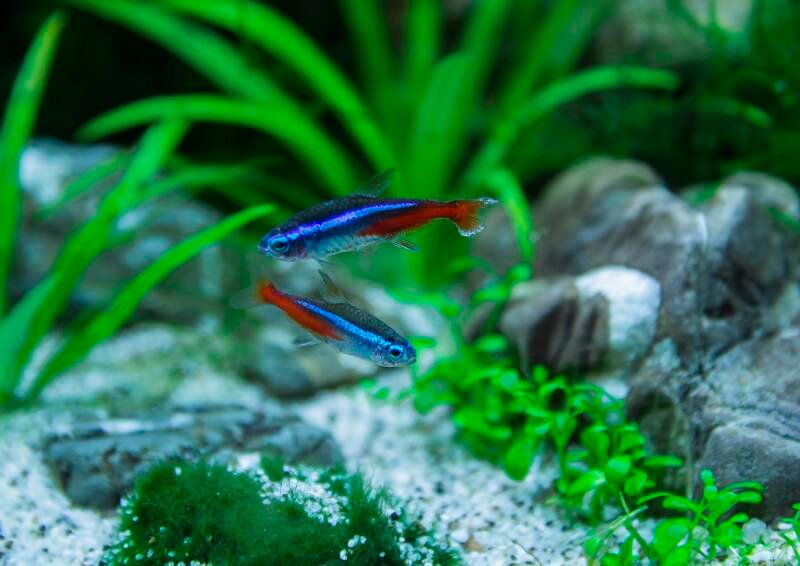 Now that we got all of that out of the way, it is time to breed your neons!

Select your breeding pair(s) and place them into their breeding tank.

Some say that light plays a vital role in inducing spawning. Keep the tank dark at first. Then ever-so-slightly increase the light levels to mimic that of the rising sun.

These fish have been observed to breed during the morning hours. After 24 hours, the fish should have spawned and should be removed from the aquarium.

The translucent eggs are sensitive to light, so be sure to keep the lights low at all times. Twenty-four hours after being laid, the eggs will hatch.

The fry, still attached to and feeding from their yolk sacks, will not need to be fed for the first few days.

Later, once all the yolk is gone, they will begin free-swimming and should be fed ready-made fry food that can be bought online or in-store.

If you are interested in knowing more, we have an in-depth article where we discuss the whole breeding process, including neon pregnancy, eggs, and fry care.

Like all fish, neon tetras are susceptible to disease when exposed to unstable water conditions or sick tank mates.

However, one ailment that commonly affects this fish is neon tetra disease.

Despite its name, neon tetra disease is not exclusive to neon tetras. Other species like rasboras, barbs, and angelfish are known to be able to contract it.

Fish contract this illness after being exposed to the microsporidian parasite Pleistophora hyphessobryconis.

Two of the most common ways this parasite is spread are by consuming live food (or dead tankmates) that are infected or being housed with other fish that already have the disease.

Symptoms of neon tetra disease include:

Unfortunately, there is no cure for this disease. Once infected, the fish’s condition will gradually worsen until they pass.

It is recommended to immediately remove and humanely euthanize all infected fish as soon as you notice the symptoms. Otherwise, the disease can quickly spread throughout the rest of the aquarium and completely wipe out the entire tank.

Some preventative measures can be taken to avoid this problem. Always maintain stable and appropriate water parameters.

When purchasing new fish, always check for signs of illness and avoid buying from stores that have a lot of tanks with sick or dead fish.

Even if the fish look healthy, if it is in a tank with sick individuals, it is best to avoid them as it is a good chance that they have been exposed.

Neon tetras make a colorful and exciting addition to any pre-established aquarium.

They are a perfect species for beginner and seasoned aquarists. Depending on the fish store, the price of neons usually ranges from $1.50 to 2.50 per fish.

Acquiring a hearty school of these gems won’t break the bank! With the information provided above, you are now equipped with the knowledge of everything you need to know to keep these spectacular tetras!

Do you have any questions, comments, or concerns? Leave them below!