The Ember Tetra (Hyphessobrycon Amandae) is a species of small freshwater fish. It originates from the Araguaia river basin in Brazil and was discovered in 1987. 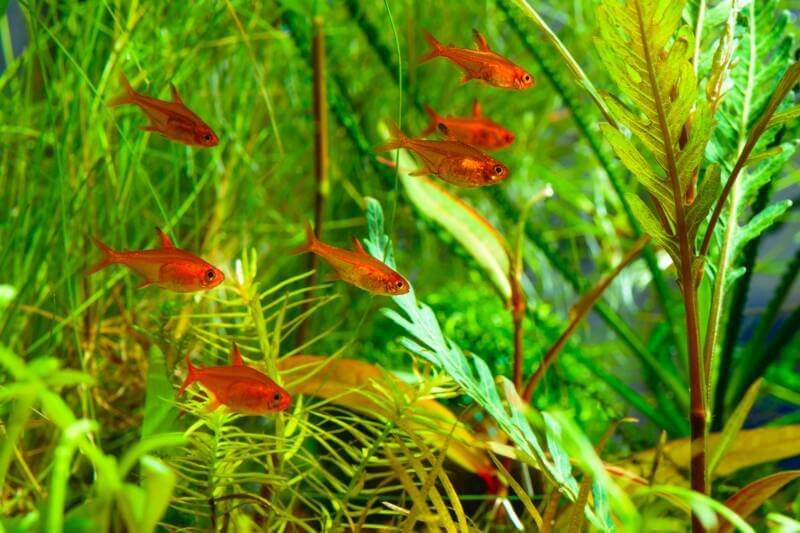 Much like its cousin, the neon tetras, the ember tetra is a schooling fish that does very well in groups.

Growing to a maximum of 0.8 inches (2cm), this fish is a popular choice for a home aquarium, due to its small size, attractive colors, and ease of care.

In today’s article, we go into detail about the ember tetra and what makes them a popular choice in the home aquarium.

Ember tetras are a spectacular addition to any community tank.

In the sections below, we cover all the aspects surrounding these fascinating species, from their habitat to their breeding habits. 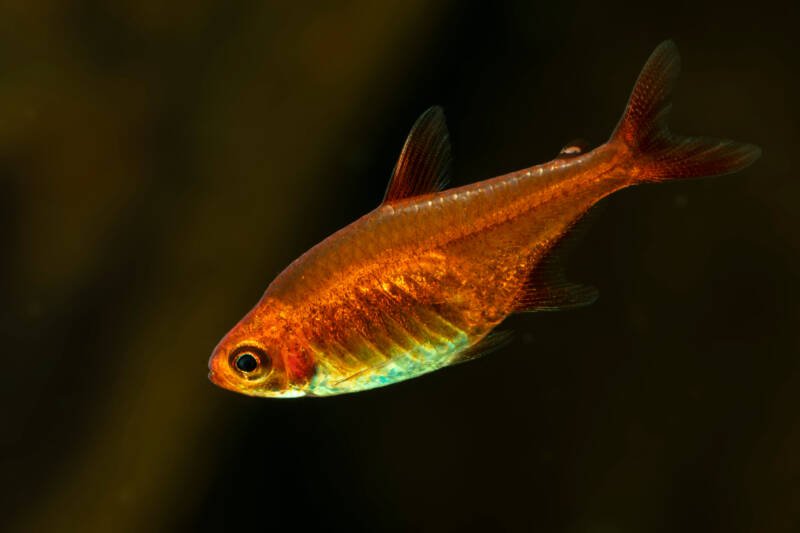 The ember tetra is commonly found in slow-moving rivers in the western parts of Brazil. Many of its cousins, like the neon tetra, are also found in the same vicinity.

Though they look very different. The neon tetra has blue and red streaks whereas the ember tetra is golden maple, almost red in appearance.

Due to the natural foliage surrounding the area, much of the ember tetras habitat consists of fallen logs, branches, and dead leaves, making the water that they live in slightly acidic because of the abundance of tannins.

This water is commonly termed ‘blackwater’. Its dark appearance also serves as camouflage for the fish which reside within it.

In the aquarium, in order to mimic their natural environment, it is generally recommended that you keep them in slightly acidic water with a pH range between 5.8 to 6.8.

As the region, they originate from is very warm, ember tetras usually do not require a heater, unless you are from a colder climate. A temperature anywhere from 70-84 °F (21-29 °C) will be suitable for them. 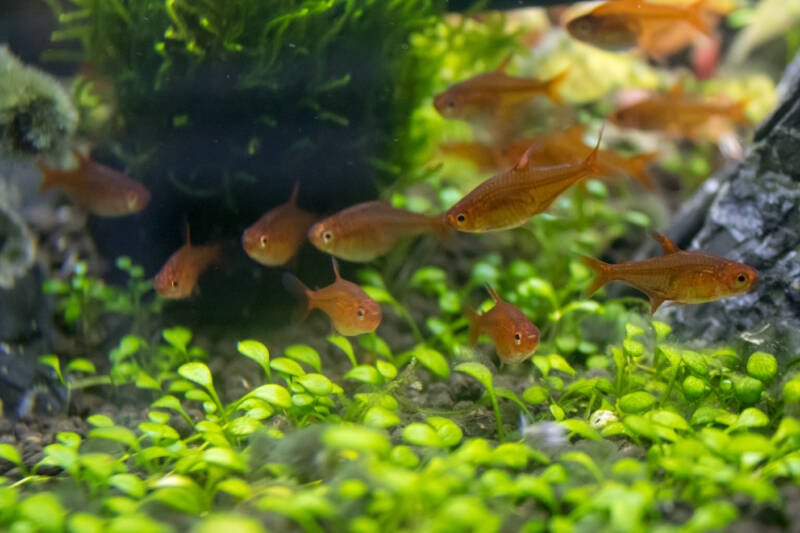 Even though they are tiny fish, the ember tetras are not shy at all. In fact, you will notice they spend most of their time in the middle section of the tank, unafraid of most things.

While these species do best in planted tanks, they will thrive in any tank if given enough hiding areas. These tetras are often observed to weave through plants and decorations throughout the day.

However, this species of fish is skittish. Due to their small size and fragile demeanor, it’s natural for them to want to avoid predators.

They are also a schooling fish. Thus it is best to keep them in a group of 5-8 fishes. (As a group, they look majestic in a community tank!)

Ember tetras are also easily stressed. Thus they should be kept with fishes of similar size and disposition. Predators and larger fishes such as goldfish will not make good tank mates. 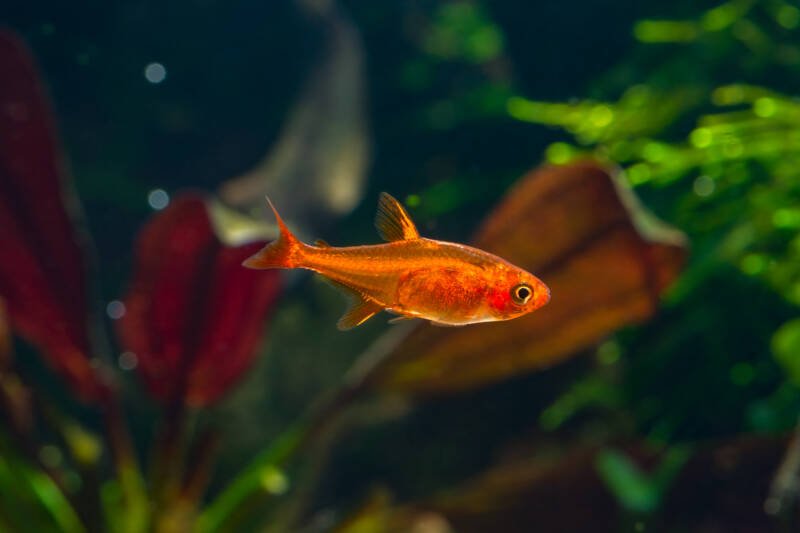 Ideally, you should have at least a 10-gallons tank to house a group of 5-8 fish, increasing by 1 gallon for every other ember tetras you might want to have.

Since this fish originates from small rivers with slow flow, it is best to have some form of a powerhead or filtration to keep the water moving.

Due to their preference for slightly acidic conditions, it is also best to have a pH in the range of 5.8-6.8.

Some form of driftwood or Indian almond leaves will help you with lowering the pH. Aquatic soil will also help in buffering the pH to prevent future crashes.

Plants and decor are recommended as well. Due to their skittish nature, they often weave through hiding areas throughout the day for security.

Having plants also has the benefit of oxygenating your tank and processing nitrates.

Much like neon tetras, the ember tetra is a voracious eater. In the wild, they will consume both plant and animal matter.

Most of their diet in their natural habitat consists of small worms, invertebrates, and zooplankton. In the home aquarium, however, they’ll happily eat most forms of dry food, which can include flakes and small pellets.

It is recommended that you vary their diet with some form of wet food, such as live or frozen daphnia, or tubifex worms. This is important because feeding too much of processed food such as flakes and pellets can cause digestion issues.

Also due to their small size, this species is a very sensitive fish. Which means they do not tolerate fluctuations in water parameters well.

Therefore, it is best to only introduce them once the tank is well cycled. Consistent tank maintenance is a must for this fish. 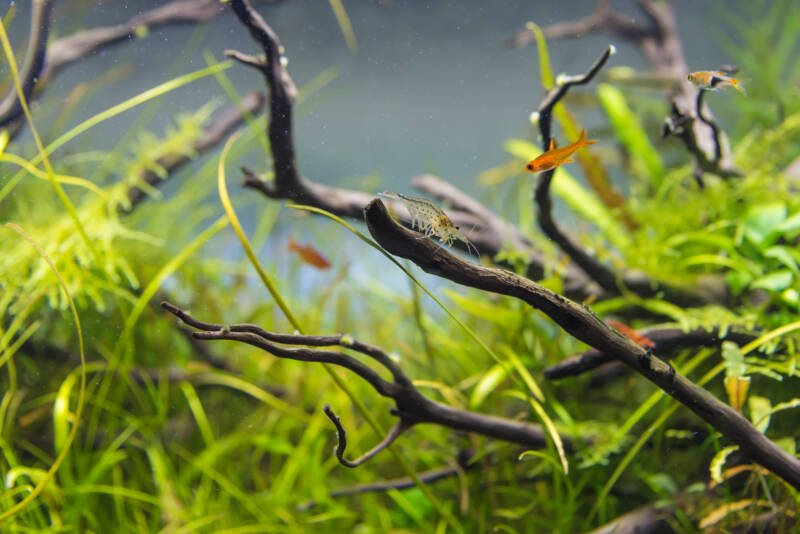 A wide variety of fishes are suitable as a tank mate for the ember tetra. Fishes like guppies, mollies, and neon tetras will do very well together with this one.

However, there are certain species that you should steer clear of when picking a tank mate:

By nature, the ember tetra is an opportunistic feeder and should do well with almost any fish in your local fish store.

That said, sometimes aggression is observed. While slight aggression is harmless most of the time, be quick to resolve and separate the fishes if it escalates.

Breeding ember tetras is a relatively easy task even for novice keepers. However, it does require some technical knowledge.

These tetras are a free spawning species but unlike the betta splendens, the ember tetra does not care for their fry.

Sexing the ember tetras is difficult for the untrained eye. For any breeding to happen, you will need to have mature males and females. This can take anywhere from 4-6 months of age.

Females have a much rounder shape as compared to the males once mature. And males during the time of breeding tend to display brighter colors than their female counterparts.

For the most part, males will also display dominant traits like chasing the females around to court her. So keep a good lookout for this behavior. 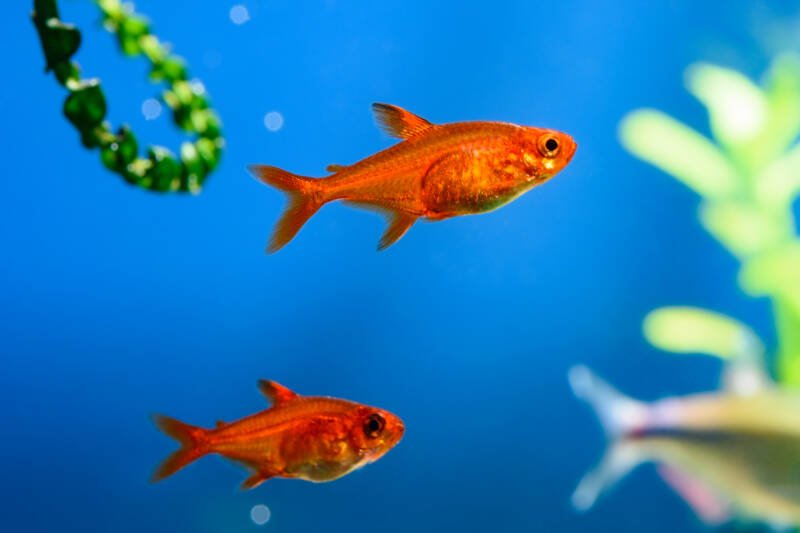 To breed ember tetras, you will need a separate tank for the fry as they do make good snacks for the adults and other fishes.

You will also need an air pump to keep the water moving in the fry tank. Stagnant water breeds all sorts of bad stuff, like fungus and bacteria.

As for food for the fry, most keepers opt to start with infusoria before moving on to bigger food items such as baby brine shrimp.

The ember tetra prefers a lower pH and softer water to trigger breeding. Somewhere in the 6.5-6.8 region will do fine.

The temperature should be on the higher side, we have had the most success with temperatures between 73-79 °F (23-26 °C).

Feed well you fishes since breeding tends to take a toll on their overall health.

There should also be plenty of plants in the tank for hiding spaces and to mimic their natural environment.

Once all the conditions have been met, mating should take place. The mating behavior if this fish is subtle and you’ll miss it if not observed closely.

Males will pair up with a female and will chase her around, nipping her as he goes along. The male will continue doing this until the female is ready to accept him.

The actual egg-laying process happens in a matter of seconds and fertilization happens simultaneously.

The eggs once laid, will fall to the bottom of the tank. Hence some keepers opt to use mesh bottom tanks to aid in removing the adults later as they will eat their fries.

The ember tetra is capable of laying a few hundred eggs every season.

The eggs usually take anywhere from 24-48 hours to hatch.

Once they hatch, they are free-swimming and will require a source of food. Like what we mentioned earlier, it is best to have on hand a culture of infusoria.

Given the right conditions, the ember tetras are an incredibly hardy species that can live up to 4 years. However, there are a few diseases that do affect them quite often and it will be good to take note.

Ich is a parasite that commonly takes on the form of ‘white spots’ on the bodies of fishes. While it can be irritating, it is generally not life-threatening and is easy to treat.

Ich usually occurs due to poor husbandry practices or the introduction of previously infected fish. Stressed fish also have a higher tendency to catch ich.

But there are many aqueous products on the market today that will solve this problem. The best medicine, of course, is prevention.

Make sure you keep up to regular tank maintenance!

These infections usually come in the form of rotting fins, and cloudy masses that can surround parts of the fish.

Thankfully, many products will solve this issue.

Given the convenience and popularity of processed dry food in this era, impaction is a common problem. It comes about when there is a blockage in the digestive tract of the fish.

Combined with a voracious appetite, dry food tends to expand quickly in their digestive tract.

While this usually does not cause a problem, eating too much too fast usually is.

It is important to vary their diet with wet food to stimulate their digestive systems.

Alternatively, pre-soaking dry food like pellets and flakes can also help to curb the issue of impaction.

Keeping ember tetras is not difficult, as they are a hardy species and will survive most conditions. However, it is pivotal to remember that they are very sensitive to parameter fluctuations.

As such, it is best to only keep them once your tank is fully cycled to have the best success. Feeding them is easy as long as you can find something that will fit into their mouths.

Do leave us questions and comments in the section below!