The silver dollar (Metynnis ) is a tropical freshwater fish, completely or partially silver in colour. As the name would suggest, the fish resembles a coin, as it's round and flat; almost a diamond shape. 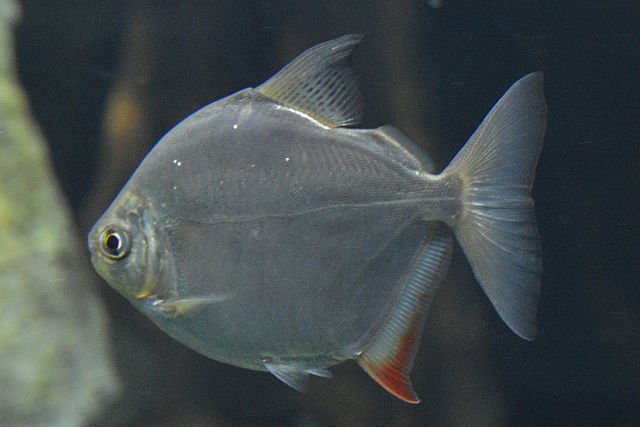 The 'dollar' is related to the red-bellied piranha (Pygocentrus ) commonly known to tear the flesh off their prey alive, from small crustaceans to cattle. Despite this, the silver dollar is -thankfully- much more peaceful than its ferocious cousin, and ideal for keeping in a tropical freshwater set-up.

Although the dollar has calm and peaceful characteristics, it is often colloquially named a 'plant piranha' or 'vegetarian piranha'. This is due to their tendency to completely strip aquatic plants bare, so while your fingers are safe, your Java fern isn't.

When a silver dollar (or shoal of silver dollars) are cared for properly, they can grow up to ten inches, but most stop growing between six to eight inches. Juveniles are often bought at around five or six centimetres, from an unhappy, over-stocked tank.

Because of the dense population of little fish in this little tank, a large number of inexperienced fishkeepers will happily buy between one and ten to put in a “beginner sized” tank when not given the correct information, not realising how big these beautiful creatures get, and these same, sad fish will be returned a year later, if not sooner as they outgrow the tank.

Silver dollars have an average lifespan of five to ten years - a relatively long life when compared with smaller fish like guppies, who will live for between a few months and five years if they are lucky. This means that they are a big commitment and if you are not sure if fish-keeping is for you, maybe start out with a few or guppies if you are unsure.

Alternatively, if you have decided that your tropical aquarium will be a big part of your life for the next ten years or more, the silver dollar is a relatively easy fish to care for, and rather hardy, so it's ideal for the beginner.

Silver dollars like to live in big shoals and are rather skittish. They feel threatened in smaller shoals and should be kept in a tank where there is little movement. For instance, a tank in a hallway, or that gets bumped a lot would not be ideal, as they will dart across the tank and become stressed. This can lead to them being prone to infections and they are more likely to live a shorter life.

Dollars are easy to care for. So as long as you have a tank big enough to house four or more fully grown dollars (if you plan on keeping them for that long, otherwise make sure that you have somebody ready to buy them off you or adopt them once they grow out of your tank) the maintenance that they require is relatively low.

They prefer shallow, long and wide tanks, with plenty of hiding places and open swimming space. They often dart from one end of the tank to another, so make sure that there are no sharp objects in the tank that they could injure themselves on, and they prefer low lighting but have been known to become accustomed to brighter lights. They can also jump, so ensure that the lid is heavy or tight fitting.

Where possible, keep dollars in large groups. A group of six or seven is usually ideal for a large tank to help them feel safe and secure. They also prefer darker coloured substrates, but again, can become accustomed to lighter colours.

When it comes to plants, choose whether you would like a very densely planted tank, so that the dollars have a large choice of plant matter to nibble at, giving your other plants chance to regrow, or a tank with no live plants. If you choose the former, then pick hardy, quick growing plants like Amazon Sword or Anubis. If you choose the latter, choose plastic plants, rocks or ornaments to create hiding places, as dollars have been known to strip even silk plants.

After initially making sure that your tank size, décor, lighting, substrate, and plants are suitable for your lovely fish, they are very easy to care for. Since there is so much conflicting advice about tropical fish care in general, I will leave the specifics, but make sure that you have an established tank, do regular water changes, and feed them appropriately, they require no additional care.

As far as tank mates go, silver dollars are best kept in large groups, so a species tank would be ideal, however, they can be equally as beautiful in a large peaceful community tank. As a rule, if a fish can fit in another's mouth, presume that it will be eaten, however I have successfully raised platy fry and guppy fry in my tropical aquarium with tetra, silver dollars, and scissortail rasboras.

Often, it is recommended to keep dollars with other large fish, simply for the aesthetic, like Bala sharks and catfishes, but they are equally as beautiful with shoals of tetra and are very peaceful. Generally, any other peaceful fish are fine to go with dollars.

Silver dollars survive mostly on plant matter, and will feed on flakes, algae wafers - they go crazy for them, break them up and spread bits about the tank unless you want a fight! - cucumber, courgette, lettuce, and squash, but will also eat brine shrimp and bloodworm. I will often leave a sacrificial aquatic plant in my tank too for them to nibble on, and replace it when it is completely munched through, approximately once a month.

Silver dollars begin to reproduce at around one year old. The females drop eggs, they are a translucent yellow colour and are not sticky. They will not usually do any harm to their eggs, and they take approximately four to six days to mature. Once the juvenile begins to swim, they can be fed on crushed flake food, brine shrimp, and milled salad leaves, amongst other things.