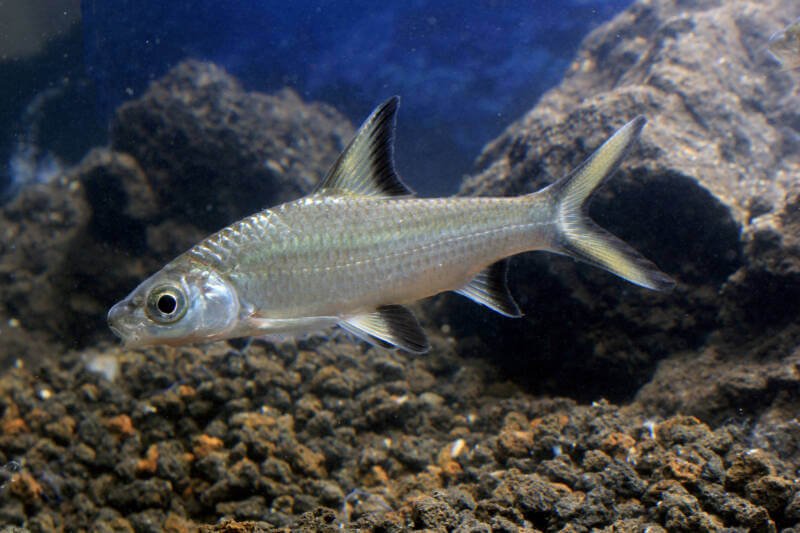 That scheme grants them the additional names of tri-colored shark, silver shark, and silver bala.

And while these shark-shaped Cyprinids look sleek and elegant in their tanks as juveniles, they present a unique challenge to aquarists.

They aren’t aggressive like red tail sharks or even semi-aggressive in the manner of rainbow sharks. Their appearance alone gives them that shark title.

Instead, these active swimmers defy beginners with their size. While they start on the small size, they quickly outgrow even the most ambitious tanks.

So if you aspire to keep one of these peaceful sharks in your home, prepare to clear A LOT of room for the aquarium.

Bala Sharks: In the Wild

Balas once thrived in rivers and lakes throughout Borneo, Cambodia, Kalimantan, Malaysia, Sumatra, and Thailand.

However, in 1996 they landed on the IUCN Red List of Threatened Species. And no one’s quite sure why their numbers have fallen.

They ARE popular in the aquarium trade, and it’s possible overfishing contributed to the problem.

But dams have also restricted habitat range, and pollution destroyed a number of their previous ranges. So there’s a good chance a combination of the three led to their decline.

That’s average for a tropical freshwater fish. Except that balas don’t stop growing there.

Bala sharks don’t have the title “gentle giants” for nothing. Before they finish, they reach impressive lengths of 12 inches (30.5 cm).

That’s a touch smaller than the 14 inches (36 cm) they grow in the wild, but still MUCH larger than most aquarists anticipate. 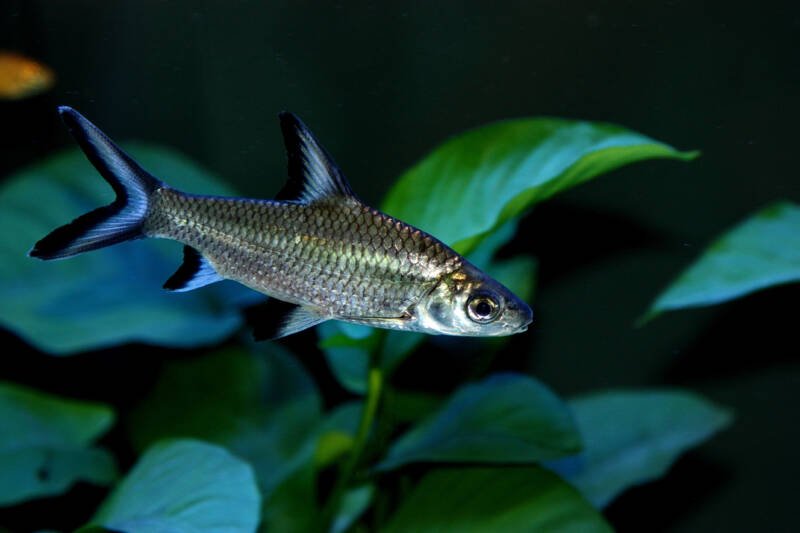 When given a suitable aquarium size and proper water conditions, you can expect your balas to live between 8-10 years. Not too shabby for a shark of that size!

Of course, many bala sharks end up getting returned to the pet store when they start eclipsing their tanks.

Unlike some freshwater sharks, bala sharks prefer to hang around in schools.

You won’t start to see aggression develop unless you limit yours to a pair. The fewer the numbers, the more likely one will become dominant and start harassing the other.

Balas prefer a shoal of at least four fish, though six is the golden number. By nature, they’re timid fish, and the school keeps them calm and spurs their active nature.

Of course, this means providing a tank large enough to house a proper school – and that’s the kicker for most aquarists.

Bala sharks enjoy swimming throughout the middle of the water column. With that impressive 12-inch (30.5 cm) adult size, that means you need to provide plenty of swimming room.

The more swimming space you can provide the better. While easily frightened, balas don’t duck into caves or spend time hiding in the greenery.

Try to get a tank at least 5 feet (1.5 m) long to maximize your balas’ swimming area.

And keep a tight-fitting lid or cover in place. When spooked, bala sharks are known to jump.

Better yet, set up your tank in a quiet spot in the house to ease any possible “spook” occurrences. It’ll save you from wondering how sturdy your lid is. 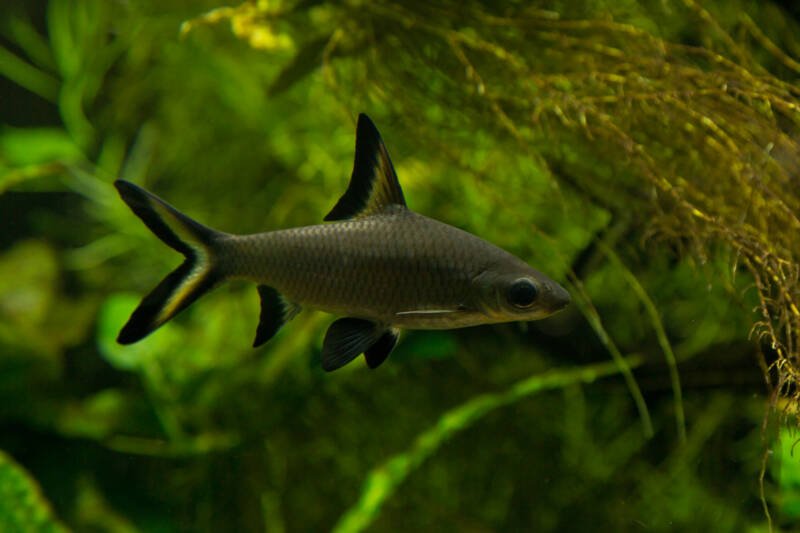 Invest in a quality heater to keep your bala sharks comfortable. Otherwise, you’ll see the development of Ich due to the dropping temps.

Bala sharks prefer a neutral pH with slightly hard waters. If you keep your pH level around 7.0, you’ll stay golden, but they’ll tolerate fluctuations between 6.5-8.0.

A hardness level of 10-13 dH will do just fine; they aren’t as touchy there.

As with other freshwater sharks, though, they have no tolerance for poor water quality. Monitor your ammonia, nitrites, and nitrates regularly.

If you start seeing any rise in those values, step up your water changes.

Bala sharks aren’t as interested in a tank’s décor as other fish. Their primary concern is the available room to swim.

So while you can add river rocks and driftwood along the bottom to mimic their natural environment, it’s not critical.

When setting up live plants or silk ones, keep them to the periphery of the aquarium. Again, balas don’t use greenery for hiding.

Floating plants, on the other hand, are a great idea. They’ll provide an extra barrier against that jumping habit:

While still young and small, bala sharks get along well with almost any colorful freshwater fish with a peaceful nature. As they start growing, some smaller tank mates can turn into snacks.

So unless you’re planning to move your balas from tank to tank, plan your community carefully.

Size needs to factor the highest when pairing bala sharks in a community aquarium.

They’re sweet in temperament, but they’re also quick-moving and may frighten slower fish. These fish work well throughout the bala lifespan:

While cichlids match bala sharks for size, balas don’t have the same temperament.

You also need to skip out on freshwater shrimp and snails. Balas enjoy snacking on these invertebrates, and you’ll end up losing your tiny crustaceans and mollusks.

You’ll also want to skip breeding fish in your community tank. Bala sharks love fish eggs, and they’ll scoop up any they happen to see.

As such, avoid livebearers in general in your tank, – unless you want to supplement your balas’ diet.

Bala sharks are omnivores, and while they aren’t picky over menu selections, you need to take some care.

Due to their active swimming behavior, you want to provide a range of protein sources.

You can offer live, freeze-dried, or frozen options. Bala shark favorites include:

Don’t skimp on the fruits and vegetables, though. Balas won’t feed on your aquarium plants, so you’ll want to supplement their diet with fresh options.

Peel, blanch, and dice up your healthy choices and drop them into the tank:

Bala sharks swarm food. Considering their size, they’ll muscle other fish out of the way, too.

Spread their feedings out twice a day, and only offer what they (and everyone else) can finish in 5 minutes.

Bala sharks only reach breeding maturity at a length of 5 inches (13 cm). This happens around 3-months-old when they’re in captivity.

There’s no documented proof of bala sharks breeding at home. The commercial-breeding facilities rely on those injections to get the job done.

They also have massive tanks available to provide as much space as possible. So, odds are, you won’t be breeding balas any time soon.

Part of the problem comes with telling the guys from the girls. Male bala sharks run to the larger size. They’re also more streamlined.

Females develop a more rounded belly to house the developing eggs, which you’ll see during the spawning season. It’s a subtle difference.

Should you wish to attempt bala shark breeding, you’ll need to start the process early – when your balas are only four-months-old.

They’ll need a tank to themselves, with proper water quality. Oh, and you need at least five balas since it’s tricky to tell them apart that young.

For the eggs, you need a separate 65-gallon (246 l) tank. Leave the bottom clear to make egg visualization easier on you.

And set the temperature at a constant 77°F (25°C). This will serve as the spawning tank for your chosen pairs.

Unfortunately, other than knowing bala sharks spawn in the morning, there’s no other clue to go on.

You’ll have to place pairs in that small tank one at a time and hope for the best. If you see eggs, remove the parents right away, so they don’t consume your new eggs.

You need to perform a 30-50% water change later that same day. You’ll note embryos in the eggs within 24 hours if the spawning was successful.

The fry hatch within four days. Each bala fry will grow at a different rate, though, so you may need additional tanks.

The complicated (and unspecific) process is why there are no documented successful at-home bala shark breeding cases.

The species is a mystery. Not to mention an aquarist needs A LOT of room for all of those tanks!

With a fright reflex prompting jumping or even slamming into other fish, bala sharks need gentle handling.

Give them at least a month to settle into your aquarium. You may even need to block the tank from view to prevent unintentional injuries.

Otherwise, bala sharks represent one of the sturdiest freshwater fish. So long as you stay on top of your water quality and temperature, you shouldn’t have too many problems.

However, they’re not immune to common fish problems:

If you’re staying on top of your food sources, your balas should remain active and healthy.

Careful monitoring of your sharks, especially during feeding times, will give you time to notice problems developing.

Bala Sharks: Are They for Your Budget?

As most aquarists purchase bala sharks as juveniles, they aren’t expensive.

They run between $3-$10, depending on your source. You’ll need to buy an entire school, but your shoal won’t break the bank.

However, when you factor in the cost of the proper aquarium size and the requisite accessories, bala sharks start tipping over to the expensive side.

Take a look at the room you have in your home before you impulse-buy even one bala!

Bala sharks rank as one of the most peaceful freshwater sharks you can find.

Their silver colors and prominent dorsal fin give your tank a unique look. And they’re active. But do you have the resources you’ll need?

Monstrous tanks require multiple filters, plenty of background plants, decorations, and that requisite lid. Not to mention a high-quality diet.

Even if you decide to supplement with homemade fish food, the costs add up. Take the time to run a budget.

Bala sharks have a sweet temperament that blends well with their shark-like appearance.

It’s one of the reasons they’re so popular with aquarists. Just make sure you have PLENTY of room for these gentle giants to cruise your aquarium!

Do you have bala sharks? How large is your biggest bala?

Have you attempted to breed your balas?