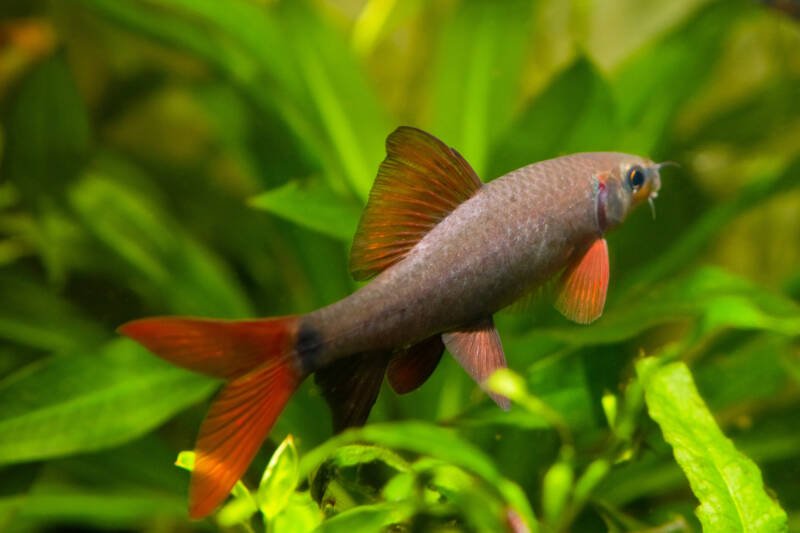 Both cyprinids feature black and red colors, a triangular dorsal fin, and a penchant for aggression, but that’s where the similarities end.

Rainbow sharks lack the intense ebony color that makes red tail sharks so popular. Instead, you find gradations to a softer purple.

They also sport that vibrant red on all of their fins – not just their tails. This colorful pattern earned them the “rainbow” title.

As with most freshwater sharks, these little bottom-dwellers present challenges for aquarists.

Though not as aggressive as red tails, they have a bullying streak that makes them grumpy tank mates.

Beginning aquarists might want to consider a different option.

Rainbow Sharks: In the Wild

Rainbow sharks used to enjoy a wider range through the Chao Phraya, Maeklong, Mekong, and Xe Bangai rivers of the Indochina region.

However, rivers along the Xe Bangai now sport dams that have restricted the rainbows’ migration patterns from their previous floodplains. As such, numbers in the wild have dropped significantly.

Good thing the aquarium trade sources their rainbow sharks from commercial fish farms in Thailand (for the most part).

This includes the popular albino rainbow shark. Rather than a black body, albinos have light pink, yellow, or white scales with red fins.

Size: Sharks on the Small Side

Most freshwater sharks present a housing challenge due to their large adult size.

Rainbow sharks don’t tip the scales that way. Adults won’t get much larger than 6 inches (15 cm).

Very rarely will an aquarist see one of their rainbows grow to 8 inches (20 cm).

Despite the fact most rainbows come from commercial-breeding, they don’t live very long.

You can expect to get about 4-6 years from your rainbow – even with exceptional care. A few lucky aquarists have documented lifespans up to 8 years, but they’re few and far between.

Much like the red tail shark, rainbow sharks have solitary natures. Even in the wild, they set up individual territories.

Patrolling along the sandy bottoms of rivers and channels, they’ll chase and bite intruders.

Juvenile rainbows start shy, spending the majority of their time hiding in the tank décor.

This often encourages aquarists to try to add more than one rainbow shark to their aquarium. The aggressive tendency develops as the fish ages, though, creating problems down the road.

You have two options if you want to attempt to keep more than one rainbow shark in your aquarium:

Please note: neither option will prevent the semi-aggressive tendencies of these freshwater sharks.

They simply allow your MOST aggressive rainbow to diffuse that bullying across multiple targets.

Rainbow sharks are active swimmers – more so than most other bottom-dwellers.

In theory, a 50-gallon (189 l) tank provides enough water volume. However, they tend to come up short in horizontal space.

The smaller the tank you choose, the more you increase your rainbow’s aggression.

If they have plenty of space to swim and patrol, they’ll settle down to exploring the bottom of the tank. As with any freshwater shark, bigger is always better.

While bottom-dwellers by nature, you DO need to have a sturdy lid for your aquarium.

When first introduced to a tank, rainbow sharks may attempt to jump out. You can always remove the cover later on.

In the wild, rainbows enjoy moderate water flow. If your filter isn’t doing enough, consider one of these additions to boost movement in the tank:

They prefer softish waters, too – around a hardness level of 5-11 dH. This reflects the waters of their native region.

Rainbow sharks are extremely sensitive to changes in pH. Regular testing needs to see a pH level between 6.5-7.5.

They also have zero tolerance for poor water quality. You have to watch your nitrites, ammonia, and nitrates like a hawk.

While the tiniest increase (2 ppm) may squeak by, your rainbow sharks will end up prone to disease and stress. 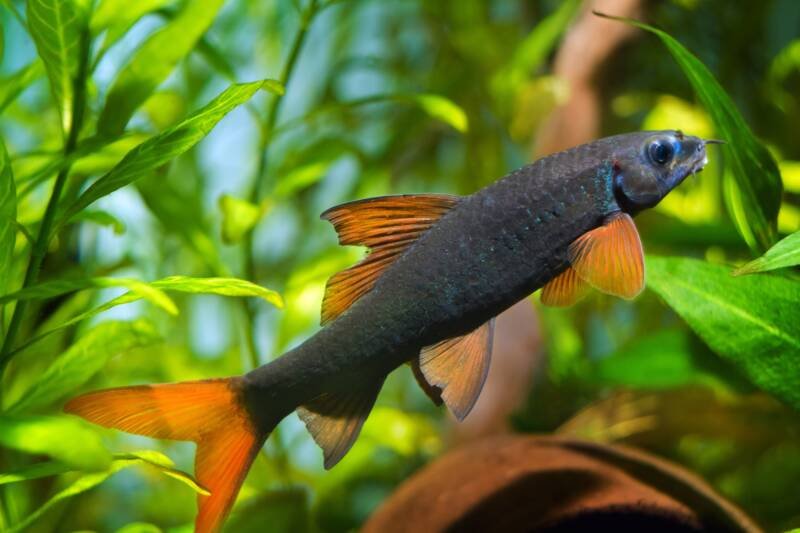 The rivers and floodplains in Thailand feature sandy bottoms studded with hiding places. You should mimic that design when setting up your tank.

Sand keeps these bottom-dwellers from cutting their scales as they skim the substrate.

Even after the juvenile stage, rainbows like to retire to caves or other hiding places to sleep.

You can use driftwood, rock formations, or purchased decorations. Give your rainbow shark plenty of options within their territory.

These omnivores will also hide out within aquarium plants. And they enjoy snacking on the greenery in addition to their favored algae.

No one wants a single-fish aquarium. However, adding rainbow sharks into a tank takes some careful planning.

While not as aggressive as some freshwater sharks, these little bottom-dwellers still have nasty biting habits and chasing other fish.

You can help limit those semi-aggressive tendencies by waiting to add your rainbow shark until everyone else gets settled into the tank.

Without a confirmed territory, the rainbow will be less likely to bully – provided you select compatible species.

Rainbow sharks prefer the bottom of the tank. So choosing colorful freshwater fish that stick to the top and middle of the tank works best.

A calm nature is fine, but you need sturdy fish that can handle themselves when confronted with aggression.

Some of your best choices include:

If your ideal tank mate bears ANY resemblance to a rainbow shark, skip it. These fish cannot tell the difference, and they’ll assume the hapless fish is another rainbow.

This goes double for red tail sharks; the two are mortal enemies.

Rainbows also won’t share the bottom of the tank. You’ll need to skip adding any other bottom-dwellers to your aquarium.

Even the most peaceful catfish will find themselves harassed to the point of stressful death.

The following species are NOT good choices for a rainbow shark tank: 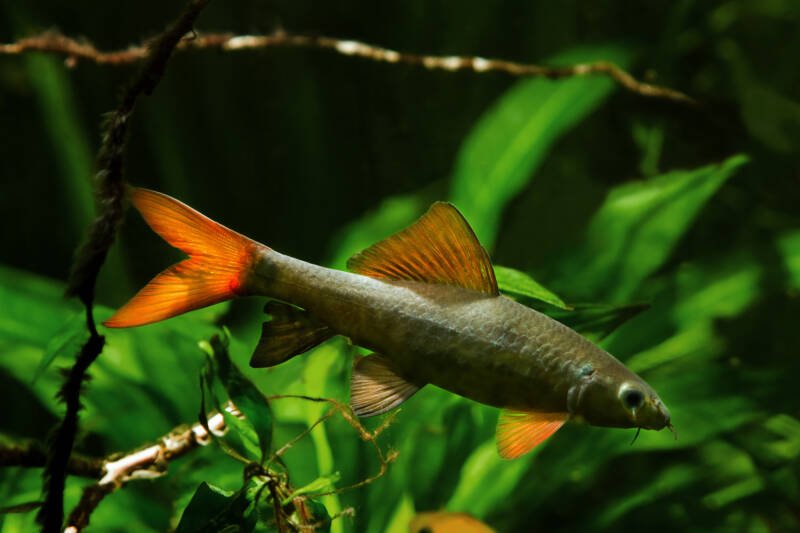 Their bright colors make rainbow sharks one of the most popular aquarium additions. Maintaining a varied diet helps those vibrant hues rem

Luckily, these omnivores aren’t picky about what you put on the menu.

Make sure your food choices reach the bottom of the tank! Rainbows don’t like to leave their territories to dart to the surface at mealtime.

Watch carefully during feeding times (thrice a day works fine), but don’t add more than your rainbow can eat in 5 minutes.

Live foods maintain that red color the best. If you start the routine when your rainbow shark’s a juvenile, you’ll guarantee a great-looking adult. The best options include:

Don’t skimp on the vegetables, though. Healthy greens also contribute to those brilliant colors.

If you peel and blanch the following veggies, you’ll keep your rainbows looking fantastic:

That semi-aggressive streak makes breeding rainbow sharks at home a challenging undertaking. Males and females don’t get along and often attack each other.

Until your rainbow sharks reach at least 4 inches (10 cm), you have little chance at successfully sexing them.

They need that long to sexually mature. Once they’ve reached “adult” length, you have a better chance of telling a male from a female.

Males, in general, have darker colors. During the spawning season, they also have a slimmer profile.

Setting Aside Plenty of Space

If you want to attempt to breed your rainbow sharks, set aside plenty of patience.

You’ll also need to have an additional tank on-hand to separate your chosen pair. The aquarium needs to be AT LEAST 75 gallons (284 l) and have pristine waters.

You also need a smaller tank for the fry. You can get away with 10 gallons (38 l) here.

Set it up with the same healthy water system as the adult tank. You should also include some décor, so your fry feel safe and secure.

Rainbow sharks spawn from October to November in the wild. Your best bet is to aim for this time, as well, though it isn’t necessary.

Put your chosen pair together and watch for aggression. If they fight, try a different couple.

Acceptable breeding behavior occurs when the two rub against each other. The female will scatter her eggs across the sandy substrate, and the male follows behind with milt spray.

Once they finish, use a fish net to transfer the eggs into the fry tank gently.

Eggs take about a week to hatch, and the embryos feed on their yolk sacs for a few days.

You can start them on infusoria for a couple of weeks before graduating them to brine shrimp. After about three weeks, they’re large enough to enter a community tank.

Even the albinos do well; you don’t see any additional problems arising due to their color variation.

However, if you let their care slip, they can develop common fish ailments:

Rainbow Sharks: Are They for You?

Thanks to the established commercial-bred system, rainbow sharks don’t present a challenge for aquarists to attain.

You find them in pet stores without a problem. At around $3 a fish, they’re inexpensive – especially since you only need one per tank.

Even the albino rainbow shark doesn’t present a difficulty for aquarists.

They’re a little rarer to locate, but they don’t run a much higher cost. And with the assistance of the hormones in the breeding process, they’re easy to produce.

You’ll have to forgo other bottom-dwellers in your tank, but these vibrant little “sharks” are often deemed worth the sacrifice.

They help clear the algae out of your tank, and their active swimming makes for an engaging aquarium.

The Other Red and Black Freshwater Shark

Rainbow sharks often get confused for red tail sharks by the uninformed. While both are red and black, rainbow sharks are only semi-aggressive.

They also prefer the bottom substrates for their routine patrols, though they won’t hesitate to nip any fish they find there.

Do you have a rainbow shark? Is it a standard color, or do you keep an albino?

What aggression problems have you encountered?