These shrimp may be see-through, but there’s no way you’ll overlook them in the aquarium.

Ghost shrimp (Palaemonetes sp.), also known as glass shrimp, is one of the most striking types of shrimp commercially available. 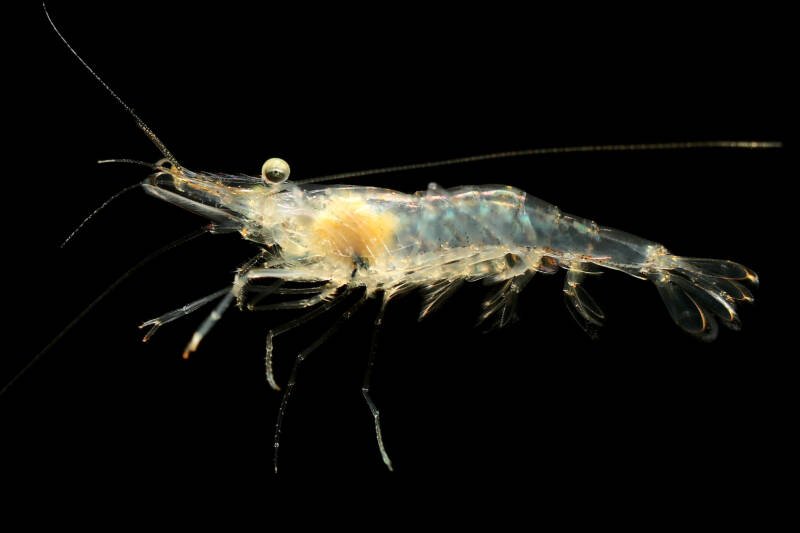 They are prized by aquarists for their remarkable appearance and dedication to keeping the tank clean.

As their name indicates, the body of the ghost shrimp is transparent. Usually, only an orange or yellow spot in the center of the tail breaks this distinctive coloration.

However, some varieties have colored dots along the entirety of their back. 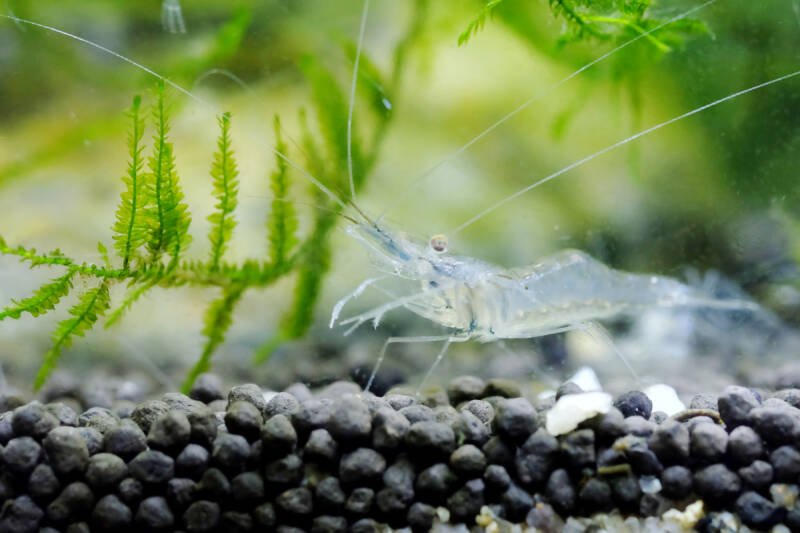 Because of its transparency, you’ll also be able to see colors from inside the shrimp, such as the colors of eggs and digesting food.

Their bodies are segmented and have five sets of legs.

The first two sets also have claws, which help it feed. Other sets also have specific purposes, such as swimming, grooming, and bracing while the shrimp burrows.

They have a large fan tail, another distinct characteristic, in addition to two pairs of antennae and a beak-like growth between their eyes.

Ghost shrimp will only grow to approximately 2 inches. 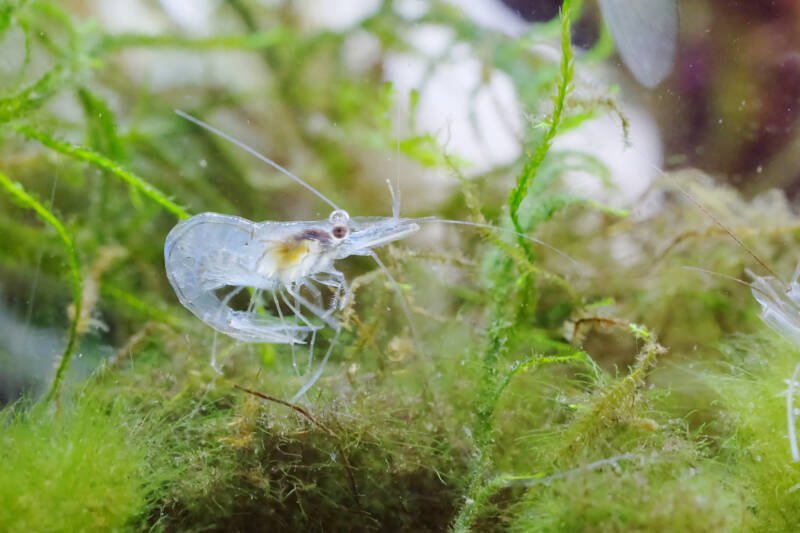 There are no prominent differences between males and females, though females may grow slightly larger.

Still, you’ll be able to clearly see which shrimp are females after they breed, as the green eggs will be visible.

Unfortunately, ghost shrimp only live roughly 1 year before dying. Some aquarists have reported longer lifespans with meticulous care, but only by a few months at most.

Their lifespans are significantly shortened by stress. This most often comes in the form of being transferred to a new tank, dealing with predatory tank mates, and poor water quality.

These shrimp are peaceful and have an easygoing temperament. They are content to simply eat and breed and are not territorial or aggressive.

These are freshwater shrimp and were originally found in the clear waters of North America.

They easily breed and spread. They also don’t need saltwater to breed, and so can even be found in landlocked water. Because of this, it’s hard to pinpoint a more specific point of origin.

Their pervasive presence across the continent also means they’re often considered an invasive species in the wild.

Though they aren’t environmentally destructive, and despite their small size, they can out-compete other bottom dwellers and scavenging species.

Their coloration also makes it harder for predators to find them. This clever evolutionary trait may be fascinating in the aquarium but makes it especially difficult to remove them from wild habitat. 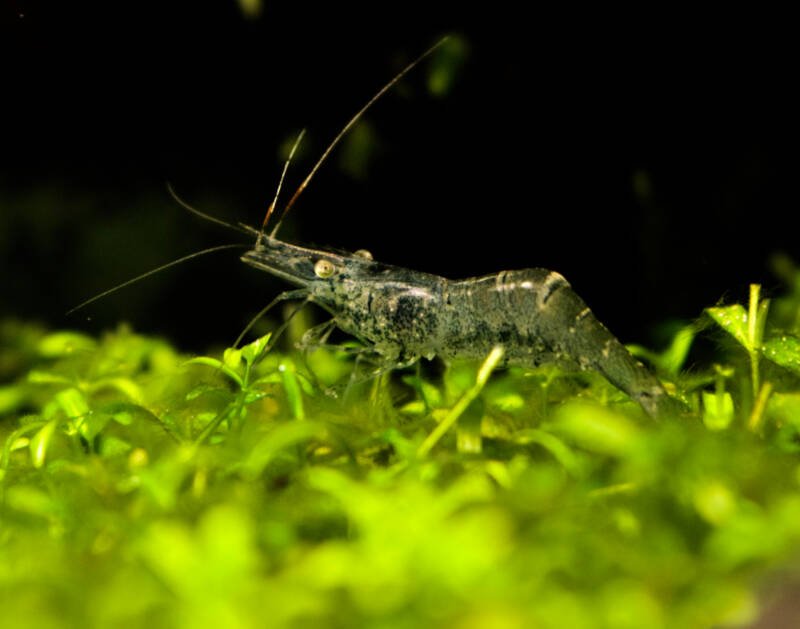 Ghost shrimp need a minimum of 10 gallons for stable water conditions. Depending on the size of the population you want to keep, this may need to be adjusted.

If you want to keep ghost shrimp in a community aquarium, base the gallon size off the needs of the other fish and add an extra 10 gallons for shrimp.

Live plants are the most important component of a shrimp aquarium or a community aquarium with shrimp in it. They provide a food source and a hiding place for shrimp.

Without live plants, your shrimp will not thrive. Because of this, you’ll also need plant-grade substrate and lighting.

With these in the tank, your shrimp are sure to thrive.

Plants and substrate also have the additional benefit of being appreciated by almost every other type of fish, as well.

Because of their delicacy, some adjustments are necessary to aquarium equipment:

If you make these easy equipment adjustments and modifications, your aquarium is officially shrimp-ready!

Shrimp, in general, are less hardy than many fish, and ghost shrimp are no exception. However, they can tolerate a wider range of water parameters than many other types. All of the following ranges below are acceptable:

Shrimp are especially susceptible to ammonia, nitrites, and nitrates. For this reason, weekly water changes are absolutely necessary.

Even levels of 2 ppm can be detrimental, so it’s important to try and keep them as close to 0 ppm as possible.

Besides these, ghost shrimp can also be negatively affected by the chemicals in plant fertilizers and aquatic medications. Specifically, copper has been known to cause widespread death in shrimp populations, even in small quantities.

The ghost shrimp has a very peaceful temperament and would get along with almost any fish in a community environment.

However, in these scenarios, it’s not the ghost shrimp that’s the problem, but rather the other inhabitants.

It can be difficult to find suitable tank mates since many fish will see ghost shrimp as food rather than a fellow inhabitant.

To avoid this, there are a few prerequisites for any other fish you place with ghost shrimp.

They must be similarly peaceful and small enough that the ghost shrimp wouldn’t fit in their mouth. Some compatible tank mates that aquarists have had success with include:

Many aquarists keep shrimp-specific tanks, in which case there is no threat to the shrimp.

To create a thriving community tank, more care must be taken when choosing the inhabitants. However, there are still plenty of exciting and varied choices.

Feeding Shrimp and Shrimp as Food

Ghost shrimp are omnivores that will eat almost anything they can get their claws on. This includes food produced specifically for them and food leftover from other tank inhabitants’ feedings.

Some of their favorite foods are:

Since these shrimp are avid foragers, they often don’t need supplemental food. 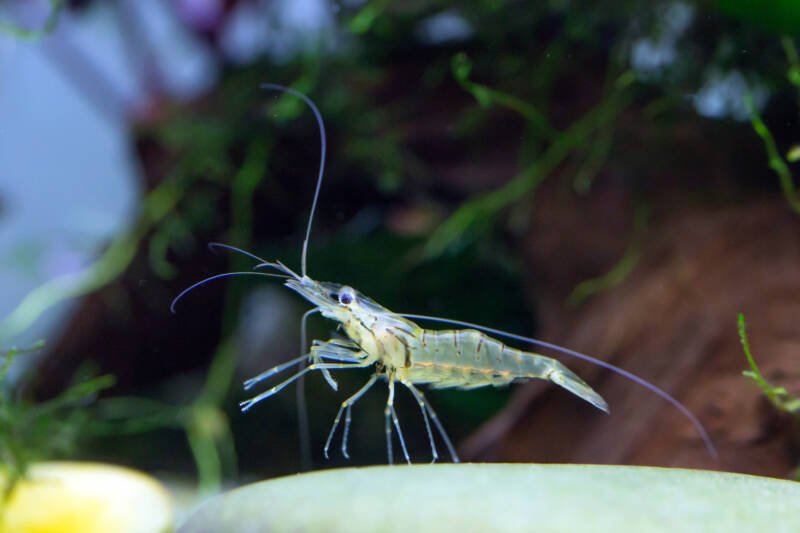 However, if your aquarium is well-maintained and doesn’t have a lot of algae or plant matter, it’s a good idea to provide extra meals.

You can use food that all inhabitants will eat, such as flakes, or food specifically for shrimp, such as sinking wafers or pellets.

This is a problem when housing shrimp in community aquariums, but a benefit if you have any picky eaters.

Even fish that are notoriously reluctant to take food in captivity, such as seahorses, lionfish, freshwater sharks will usually gladly eat ghost shrimp.

They do not require any specialized preparation to induce them to breed. There are only two main requirements which must be met (both of which are present in any healthy aquarium):

If a female is pregnant, you’ll be able to see the green eggs just under her tail. Because of the size, they’ll probably look more like tiny dots, though.

Move pregnant females to a breeding tank and ensure the water quality is perfect. You can also give them supplemental meals to ensure they’re eating enough.

Once the eggs hatch, move the females back to the main aquarium.

You can feed the baby shrimp infusoria, hatched brine shrimp, rotifers, and other liquid foods. Once they are matured, move them to the main tank.

Aquarists should be careful to keep an eye on the size of the population. Though these shrimp are small, they still have an effect on the tank’s bioload.

It can be easy to accidentally overstock the tank if you let ghost shrimp breed as much as they want.

Featuring Ghost Shrimp in Your Aquarium

Their peaceful temperament and determined cleaning make them an excellent addition to almost any tank.

It’s because of these same characteristics that both beginner and experienced aquarists enjoy setting up tanks just with ghost shrimp.

Though they don’t live long, they are a delight to watch and care for.

They may be transparent, but ghost shrimp shine bright as any aquarium.