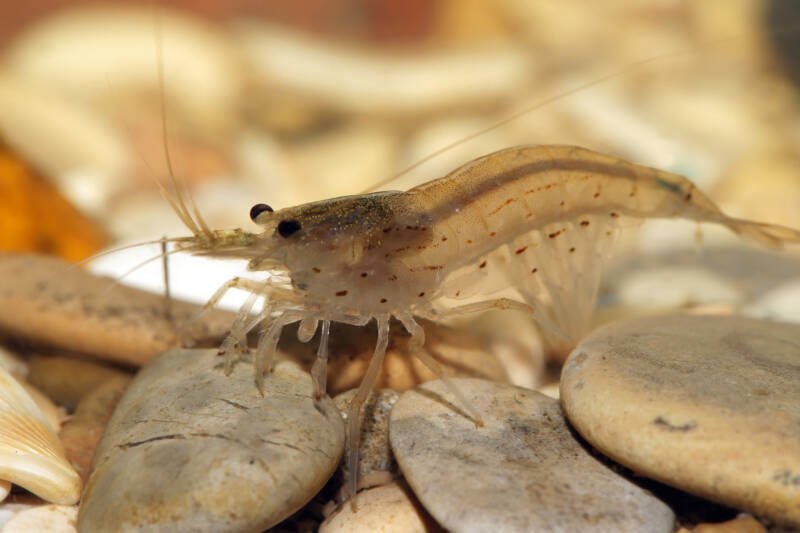 The Amano shrimp is one of the most popular freshwater shrimp in the freshwater aquarium trade because of these tank cleaning abilities, right behind the cherry shrimp.

The shrimp were named after Amano, who made them a staple in the aquarium trade.

This species was once referenced as Caridina japonica, but in 2016 were reclassified as C. multidentata.

They are also known by a variety of common names, including Japonica shrimp, algae-eating shrimp, and Yamato shrimp.

These industrious algae eaters and busy-bodies make for a great addition to many aquariums. They are a good invertebrate for beginners as they are quite hardy.

Their care requirements are minimal, but you’ll want to keep your shrimp happy and healthy. We’ll go into exactly how to achieve that in this guide!

Amano Shrimp can be found in Asia, where they live in large groups in freshwater rivers and streams in Japan, China, and Taiwan.

These tropical, freshwater riverbeds consist of small rocky pebbles, something you should mimic in the tank habitat.

However, it’s important to note that only adults live in freshwater. As larvae, they require brackish water, a mix between fresh and saltwater, to hatch and survive.

Amano shrimp have a rather distinct appearance, with transparent, greyish bodies and translucent tails. 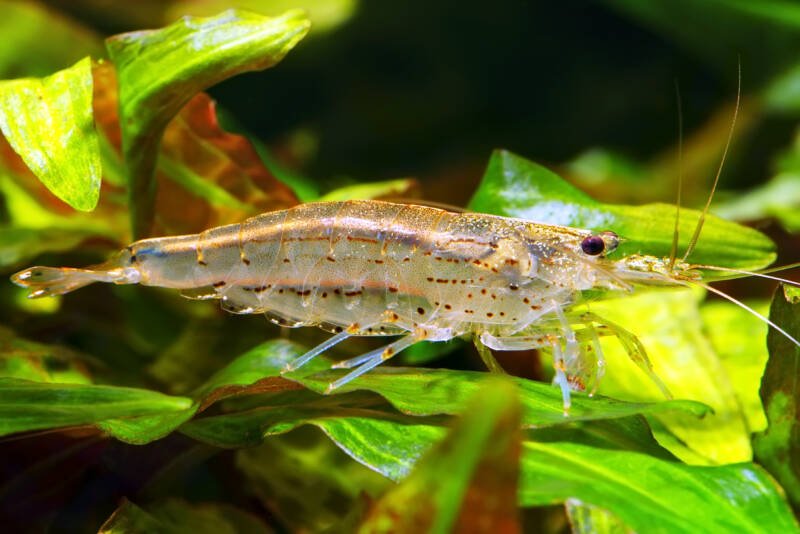 Continuous alongside the body is a recognizable line. This line is comprised of either red and brown or blue and grey dots.

Dot coloration can be influenced by an individual shrimp’s diet. Most notably a green tint is an indicator of a shrimp who is consuming large amounts of algae.

These dotted lines can also tell us the shrimp’s gender, but we’ll later go into this.

Growing up to 2 inches (5 cm), the Amano shrimp is one of the larger dwarf freshwater shrimp species.

Amano shrimp are peaceful and active, always foraging and swimming on the lookout for food. They’re known for adding a buzz of activity to your aquarium.

They are frenzied feeders and will jump at food added to the tank. You may notice a hierarchy of behavior when it comes to feeding; the largest shrimp has priority.

Otherwise, Amano shrimp spend most of their time foraging for additional food and debris in the substrate.

Because of their transparent and grey body coloring, they can camouflage well and be difficult to find in your aquarium at times.

They will molt monthly, during which time they are particularly vulnerable.

While the shrimp are molting, they’ll often hide, which is why plants and shelter in an aquarium setup are important!

It’s also important to make sure they are well fed during this time.

Amano shrimp will live for around 2-3 years. When they die, the shrimp turns a bright orange.

Similar to how the shrimp eat their exoskeletons, snails and other shrimp in the tank may eat at the dead shrimp for minerals to replenish their nutrients.

However, if the other tank inhabitants seem to be done with it, it’s a good idea to remove it from the tank to avoid a spike in ammonia.

A minimum of a 10-gallon tank will be needed for your Amano shrimp.

It’s ideal to keep them in groups of at least 5, with 1 individual per 2 gallons.

Start with a small, rocky substrate such as pebbles emulating the natural rocky river beds they come from.

Java moss and green Cabomba are great plants to add to your Amano shrimp’s tank setup.

These species seem particularly fond of moss balls; they’ll use it to climb on and pick off bits of food.

In addition to Java moss, marimo moss is another good option. 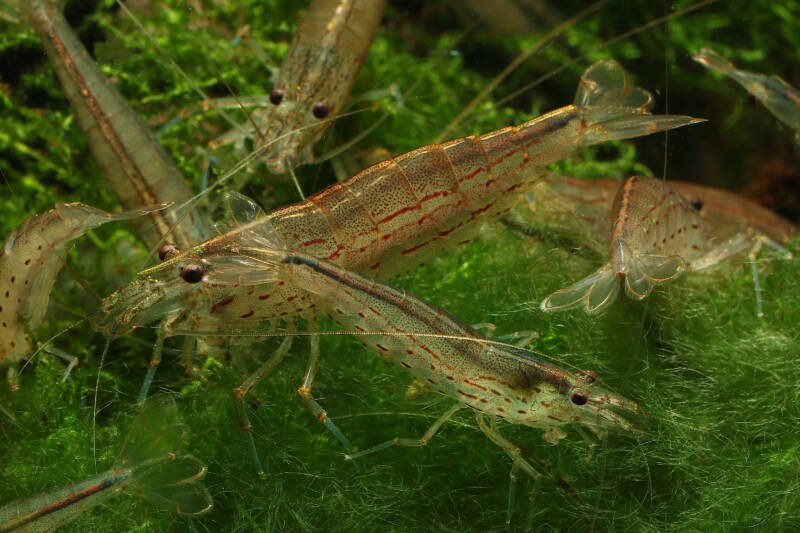 You may also choose to invest in shrimp tubes for your tank setup. Décor and live plants will also shed edible debris for your shrimp.

You’ll want to provide additional shelter for your shrimp’s comfort. Driftwood and wooden branches are a good start.

Ensure that you’re adding your Amano shrimp to fully cycled tanks that have debris and algae already available.

Sponge filters are also a nice addition as they catch food bits your shrimp can feed on.

A HOB filter will be best for simulating their natural environment’s moderately moving currents.

Standard community tank lighting will work fine for these shrimp. 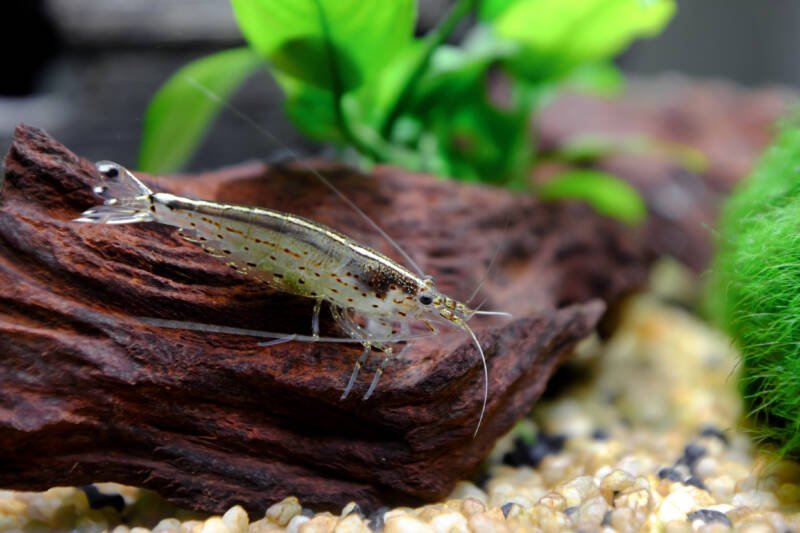 Amano shrimp seem to like water that’s on the hard side, 7-8 dGH.

Amano Shrimp seem to be somewhat resilient to ammonia spikes. However, changes in pH, temperature drops, and high nitrates have a greater effect.

You’ll want to maintain ammonia and nitrite levels at 0 ppm, and nitrate levels should remain around < 20 ppm.

Both species-specific or community tanks work well for these shrimp.

Amano shrimp are commonly seen as prey items with their peaceful nature and lack of defenses, so select tank mates carefully.

You’ll want to avoid Amano shrimp sharing a tank with large, aggressive fish such as arowanas, bettas, goldfish, and crayfish.

It’s best to keep them with peaceful, small to mid-size community fish such as discus, small plecos, tiger barbs, and cory catfish.

They also coexist well with snail species like nerite snails and mystery snails.

If you’re planning on keeping your Yamato shrimp in a species-specific tank, try to maintain an even ratio of males to females.

As has already been mentioned, Amano shrimp are known for feeding on algae.

These eager algae eating shrimp are excellent aquarium cleaners. The only algae they won’t eat is black beard algae.

Despite their eager dining on algae, these omnivores’ diets should still be supplemented.

As the basis of their diet, you should provide your Amano shrimp with a pellet food or an algae wafer. 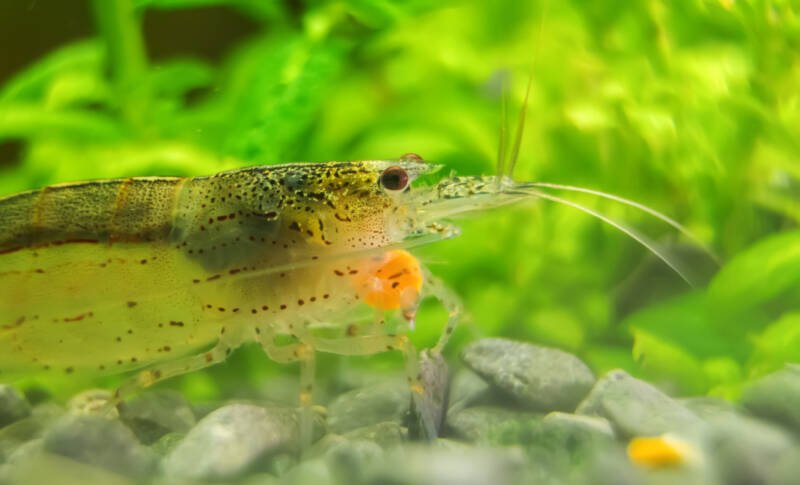 Frozen bloodworms and brine shrimp are a good option. They will also eat cucumber, squash, zucchini, and spinach that’s blanched or boiled.

It’s easy to distinguish the gender of Amano shrimp. The dots along the exoskeleton of a female will be elongated while males have evenly spaced out dots.

Similarly to the other shrimp species, mature females will have a saddle used to carry eggs underneath their stomach.

Additionally, females tend to be larger than males.

While sexing these animals is quite easy, breeding in captivity is far more difficult. This is largely due to the larvae’s requirements for brackish water. 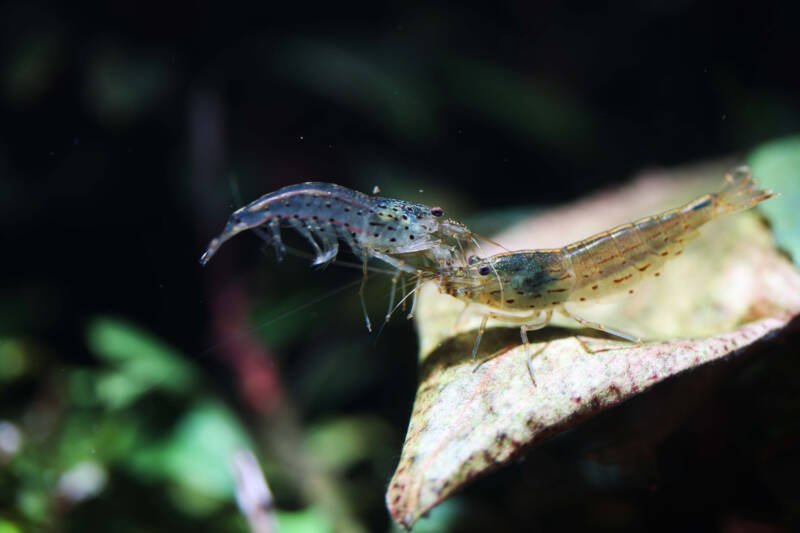 It will be obvious when mating has occurred as females will be carrying eggs in the saddle beneath their stomach. At this point, the females are referred to as berried.

In the wild, berried females will carry their eggs for six weeks, fanning their tails to oxygenate the eggs. 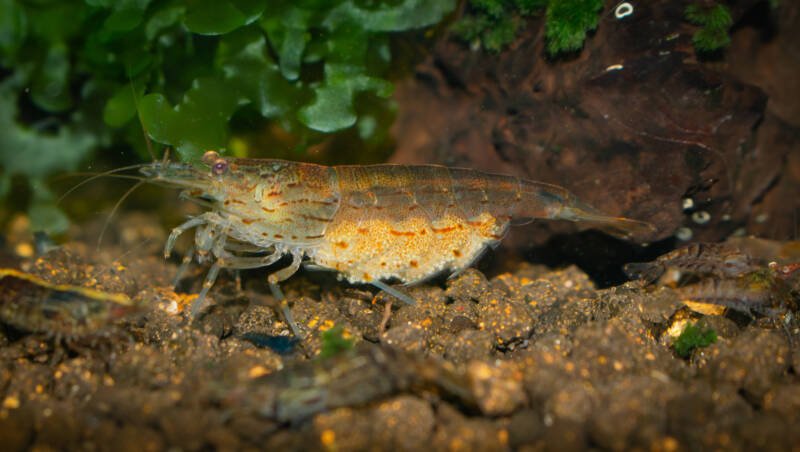 At six weeks, the eggs will be released into brackish water, where they’ll grow in slightly salty water.

Once matured, even a small amount of salt exposure could kill an Amano shrimp!

If you are attempting to breed in captivity and arrive at this stage, the adults should now be removed from the breeding tank as you increase the water’s salinity.

Breeding success in these shrimp has been so low that there isn’t much additional information available beyond this point.

However, one successful report of breeding in captivity recorded a salinity of 1.024.

Similarly to other shrimp species, Amano shrimp can become afflicted with bacterial and fungal infections as well as parasites.

Bacterial infections can be hard to identify and equally difficult to treat.

However, recognizing fungus and parasites can be easier.

Healthy shrimp should be able to fight off fungal infections fine. These can be unavoidable; there are spores everywhere in the water and air.

Be sure to separate the infected shrimp from the rest of the population. Fungal treatments will usually help rectify the situation.

Parasites are not always a death sentence; some even live in symbiosis with the shrimp.

Performing a salt bath with aquarium salt will get rid of unwanted parasites.

This same treatment will help with another disease that’s not too uncommon in these shrimp, vorticella.

Vorticella is an aquatic organism – protozoa, that has been known to cause death in untreated shrimp.

They attach themselves to the shrimp and will look like a fuzzy white mold or fungus.

It’s essential to treat your Amano shrimp with freshwater aquarium salt to get rid of the vorticella.

Like most invertebrates, this species is incredibly sensitive to copper. Be cautious of fish food or medications that may contain this metal.

The Amano Shrimp is certainty suitable for beginners. This is a hardy species that doesn’t demand too much attention.

Not to mention the exciting activity and practical purpose they add to any tank. They’ll work tirelessly and voluntarily to keep your tank clean.

They are the perfect peaceful invertebrate to add to community tanks.

If you have additional questions about caring for your Amano shrimp or comments, please feel free to reach out.