The Sparkling Gourami may be also known as the Pygmy Gourami, but its stage presence in a tank is certainly huge! This small fish makes a splash with its bright coloring and unique sounds. 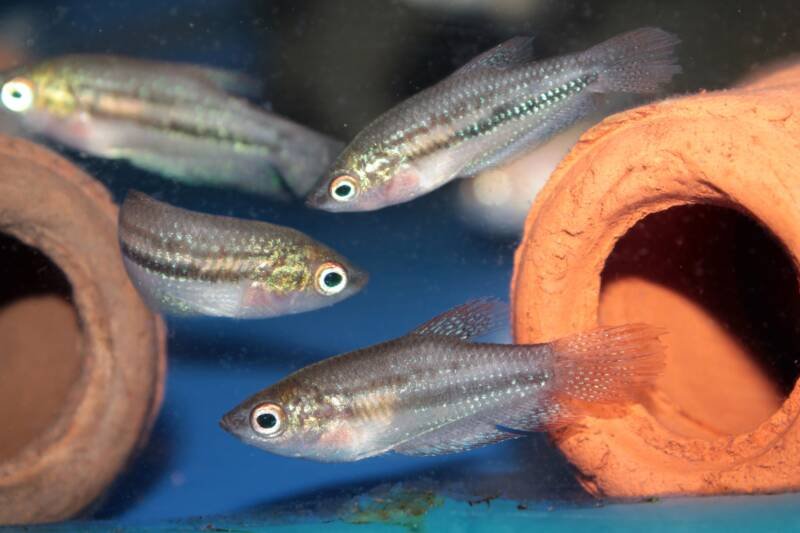 Additionally, its reputation as an easy-maintenance fish is well-deserved. Though they require clean, warmer waters and minimal current, they are otherwise hardy and would make a seamless addition to any community tank.

Basic Facts About the Sparkling Gourami

As the name suggests, these gouramis do sparkle— but are (unfortunately) not sparkly all over. Instead, they’re primarily brown with colorful spots in green, blue, white, and more colors dispersed over their body, even on their fins!

Their fins are also edged with a light brown or dark orange stripe.

This gourami, like others of its species, is an anabantoid.

Anabantoids are fish that have a special breathing organ called a labyrinth organ in their gill chamber, which allows them to take the air directly from the water’s surface instead of through the water itself.

This gives rise to one of the Sparkling Gourami’s most notable trait: its regular forays to the top of your tank for air.

They can live anywhere from 2 to 5 years, with four and five years being the average most owners report.

Sparkling Gouramis tend to be fairly peaceful, although males have been known to become aggressive and compete for territory and mates. This is why it’s recommended to keep several females for each male.

These gouramis have no preferences as far as tank level goes; they will travel from the lower regions to the surface and back again without fuss.

They enjoy exploring planted areas in particular, however, as well as discovering new hiding spots and décor you may place in the tank.

Another unique trait of the Sparkling Gourami is that it makes sounds when they’re happy or during the mating season. These sounds vary but have been most closely compared to a loud croak or chirp that can be heard even outside of the tank.

This fish hails from Southeast Asia and inhabits quiet, warm waters with heavy vegetation and minimal to medium flows.

The simplicity of their natural habitat is easily replicated in an aquarium, as we’ll discuss in the next section.

Their reliance on plants for much of their behavior- hiding, playing, mating, and childrearing- is the most complex part of keeping these gouramis in the home.

Though Sparkling Gouramis are small, they require a decent amount of room to swim in and explore, which means that the minimum tank size is 15 gallons.

You should add an additional 10 gallons for every new fish you want to incorporate in order to avoid undue aggression.

However, take care to check the reviews on your equipment before purchase.

Loud noises and strong water flow discourage their normal activity and may cause them to hide for the majority of the day.

For this fish, plants are a must. Though artificial and silk plants could suffice, this fish is happiest with live plants. Larger forms of swords and anubias plants are recommended, as their broad leaves provide ample space to play, mate, and hide in.

Décor that would appear in their regular habitat, such as rocks and driftwood, can also provide ample entertainment for both you and your fish.

If you decide to use live plants, a plant substrate is required in order to sustain healthy growth.

A darker substrate is recommended in order for the Sparkling Gourami’s color to really pop. Sand is also an option, but the plants will need to be consistently supplemented with nutrient root tabs.

Similarly, a planted aquarium light is also necessary. Full-spectrum LED lights of at least 4500K are preferable because of their longevity and effectiveness.

For the best plant growth, regular CO2 and nutrient injections are also suggested.

The Sparkling Gourami is known for being a hardy freshwater fish, but should still be kept in a clean tank that undergoes weekly water changes.

In addition to basic cleaning, regularly check your water parameters to make sure they meet the requirements below:

Ammonia, nitrite, and nitrate levels should all be kept below 5 ppm, which is easily attainable with regular maintenance and careful attention to debris and food buildup.

If you keep your tank within these parameters, your gourami will live a long and happy life.

As long as the other tank inhabits are peaceful the majority of the time, Sparkling Gourami will get along with them.

Though gouramis can show aggression over territory or mating, they are on the whole a tranquil breed that is happiest when paired with like-minded species.

Some acceptable tank mates include:

This gourami will get along with other schooling species or independent fish, but will most thrive with other fish that also prefer warm waters, heavy vegetation, and a slow current.

The Sparkling Gourami is not a picky eater and will accept a variety of foods, such as:

However, they much prefer meaty live, frozen, or freeze-dried foods. Daphnia, artemia, bloodworms, and shrimp meat are all favorites and guaranteed to make even the pickiest specimen hungry for more.

But be warned: like many other species, these fish are prone to overeating. Watch their food intake and be sure no one gourami is hoarding food. Their stomachs should be slightly rounded, but not obscenely bulging.

Diet is also a good indicator of health for this species.

If your gouramis appear dull in color or are silent for extended periods of time, check their food to make sure it is appropriate and enticing for the fish.

Is the Sparkling Gourami the Right Fish For You?

Sparkling Gouramis combine the best of both worlds: show-stopping looks and easy maintenance.

These fish are suitable for both species-only tanks and community environments and are peaceful enough to get along with a variety of other types of similarly-tempered fish.

For beginners and advanced aquarists looking for an aquarium centerpiece fish, the Sparkling Gourami is an excellent choice.

It is widely commercially available, affordable, and beautiful. Its unique habits and sounds only serve to further endear onlookers to its many charms.