So what exactly is an oto? It is a tiny green / brown catfish of the genus Otocinclus that enjoys munching on algae all day.

Eating algae in itself would be enough recommendation for many tank owners, but these freshwater fish are also very cute, fun to watch, affordable, and they stay small.

If you have a planted tank, matured but with the almost inevitable algal breakouts, I’m hoping to sell you on the idea of otocinclus catfish as the leaders of your natural algal defense squad.

If you have a busy, unplanted, boisterous community tank with large inhabitants, I suggest you look elsewhere. Otocinclus do need a little special attention, and for that reason, you probably wouldn’t want to pick it for your first freshwater aquarium.

They need really clean water, or they just won’t do well, so you need some practice in water quality management.

On the other hand, they are the only algae-eating fish available that will stay small-tank-sized and stick with an algae diet into adulthood, unlike the plecostomus.

If you don’t think otocinclus is for your tank, consider alternatives such as the Siamese algae eater (check on their final size and compatibility with your other fish) or ancistrus/bristlenose, which can stand more varied water conditions and more disruption than otos.

Chinese algae eaters are worth avoiding because of their highly territorial behavior.

There are 20 species of otocinclus, but they share many things in common. They are small sucker-mouthed catfish. Even as adults, the largest otos come in at around only 2 inches long (5 cm).

They often have muted green/brown/grey coloration with a darker horizontal stripe down their flanks. Their shape is streamlined, and some say they resemble a little shark.

In the pet store trade, the different species are often not recognized or correctly identified. Read up from the references I have listed below if you want to make sure what you’re getting.

The key to telling some of the more similar varieties apart is the detail of tail markings.

Here’s a list of the most commonly offered otocinclus catfish species:

The one species that is really a bit special is the zebra otocinclus which sports smart, vertical stripes. Expect to pay a premium for these guys.

In the wild otocinclus swim in big shoals, often of more than a thousand fish, mingling with corydoras.

They spend their time cruising the fast-flowing shallows of streams and small rivers. They are South American, from Colombia in the north to Argentina in the south.

Otos spend their time grazing on aufwuchs. Aufwuchs is the German name for the slimy coating that grows on aquatic plants’ leaves.

Aufwuchs is composed mainly of diatom algae but also includes animals such as rotifers, mini crustaceans, and protozoa.

In their natural habitat, otocinclus catfish are reported to be found feeding from the surface of finely leaved aquatic plants or submerged grasses but also roots and other submerged wood.

They like to keep to shallow water because the high light levels there promote more algae, and in all probability, there are fewer large predatory fish to bother them.

Many otocinclus owners speak of them affectionately. They seem to have more personality than a lot of small fish.

If you keep enough to allow them to do a little shoaling, you will have many interesting hours watching them interact.

They are not nocturnal. I suspect they can be pushed this way in a crowded or boisterous tank, but in a peaceful environment, you will see a lot of them during daylight hours. They split their time between resting on leaves and bogwood and active feeding.

Otocinclus catfish are a peaceful species, but there are enough reports of them attaching themselves to deep-bodied fish that this needs to be taken seriously.

Discus and angelfish are the main targets, and there is no definite cause; some speculate that the otos are hungry and attempting to feed from the target’s slime.

In most cases, the oto comes out worst when the larger fish retaliates. It’s bad for both animals and is easily avoided by not housing otocinclus with a slow, deep-bodied fish. 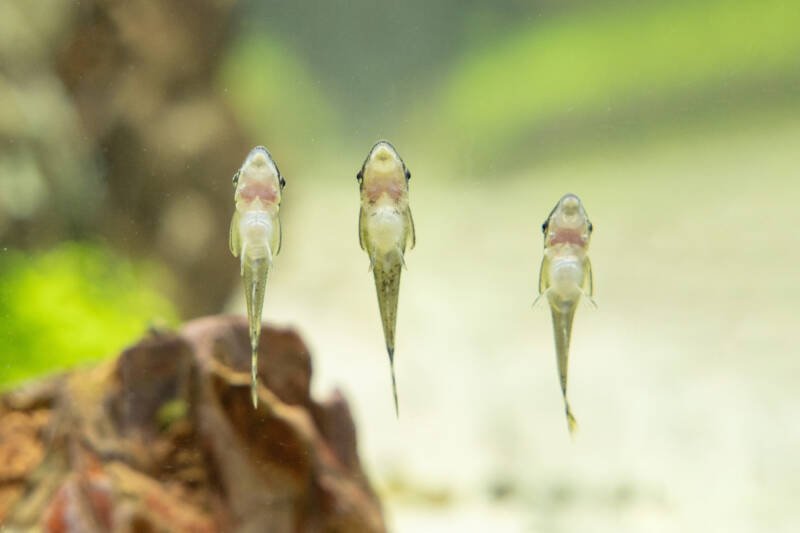 For otocinclus, cleanliness is more important than an exact temperature or pH level.

If your tank and filter are properly cycled, and you are keeping stocking levels and feeding sensible, then your only real additional issue will be keeping nitrates low.

The healthily growing plants that you will need to create an oto-friendly environment will help with this, but your main tool will be the water change. Many planted-tank keepers favor 30% or greater water changes a week, which would suit the otocinclus well.

Care for all the otocinclus catfish species is similar. Have a look at www.planetcatfish.com for detailed suggestions on a particular species.

Introducing Otocinclus to your Tank

Reading around the web and aquatic magazines, you will quickly hear that there is an issue with otocinclus not settling in after they are brought home from the fish store.

Losses are higher than you might expect. Perhaps, because they are small and timid and need clean water, they get worn down badly by the catching, shipping, and pet store experience. Almost all otocinclus catfish you will be offered are wild-caught…

Whatever the cause, you need to be extra careful with your acclimation and early days’ routine:

In all honesty, I don’t think many people set up species tanks for otocinclus. They normally get bought for their algae-eating function, which is a shame as they have many other fine qualities.

But, let’s assume otos were our only residents. Let’s talk about how the tank would be set up, and it will give you an idea of whether they would fit into your system.

Remember, you really need at least 6 of these guys to make a happy shoal, so a nano tank is not ideal.

I would suggest, as a minimum, a 10-gallon system. A good-sized tank makes it easier to keep water conditions stable, and it will give you leeway to find some other tank mates.

Water quality is vital, so an excellent filter is essential. An appropriately sized canister filter is a good choice as you can pack in with biological media, and in addition, it will provide the strong water flow these cats enjoy. You can add to the flow with a small powerhead if necessary.

It is important to protect the fishes’ delicate suckermouths by avoiding sharp surfaces. A substrate of rounded gravel or soft sand is best.

Bogwood is a favorite grazing site and should be included. Rock in the tank may be limited as you are likely to want to go with many planted areas, but vertical pieces of slate that can attract algal growth are a useful addition.

Really go to town on your planting. The otocinclus catfish won’t eat your plants. They want to graze algae from them, so I would suggest some slow-growing plant species.

Anubias, Java fern, or Echinodorus would be a good starting point. Cabomba is an easy fine-leaved species to grow and would help mimic otos natural feeding sites. 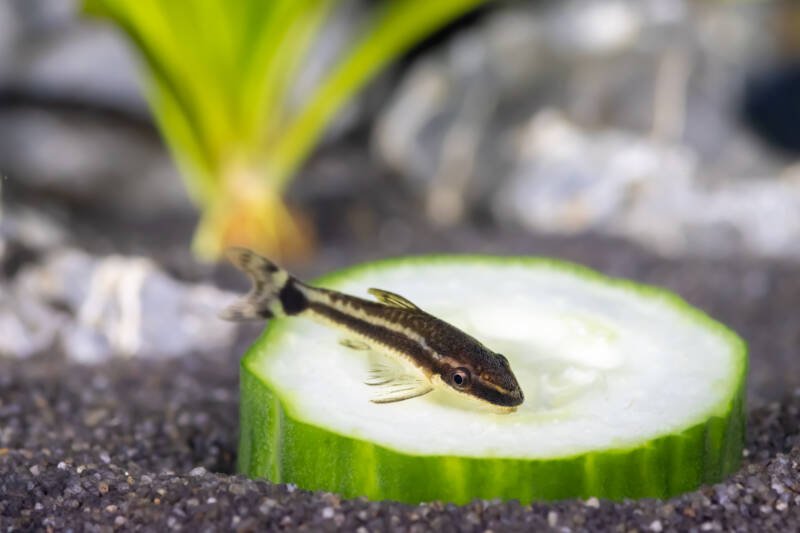 Algae!!! Yes, you’ve got it. In an ideal world, otocinclus want the exotic-sounding aufwuchs they would get in their native rivers.

A diet heavy on plant material and light on animal protein. However, even in a large planted tank with a good algal growth, you will put your cats at risk if you don’t offer some additional food.

You can easily provide some extra fresh plant material by offering cucumber, spinach, or zucchini. Wash vegetables well to remove any fertilizer or pesticides.

Catfish pellets or algae wafers can be offered to round out the diet. One breeder brought his otos into condition by feeding brine shrimp in addition to their normal food.

Otocinclus catfish have been bred in tanks. They breed in a similar fashion to corydoras. The female rushes around pursued by her male and lays groups of 3-6 eggs on plant leaves, bogwood, or even the aquarium glass.

Breeding otocinclus in aquaria is still in its early days, and it would be a great thing to achieve in your tank.

Raising the fry is challenging because of the need for tiny live foods and algae. There seems to be no particular stimulus for spawning, although some breeders report that it is seasonal.

So there are good reasons and bad ones to buy an otocinclus catfish. But really, that is no different for most species.

I hope I haven’t put you off these cats by highlighting the possible problems. They are lovely characters and in many gentle community tanks they will fit in.

Go the extra mile for them, though, and get the water clean and the environment right to give you the best shot of success.