It may look like something straight out of a monster movie – a crab frothing at the mouth as it inches slowly toward you! But, as scary as that sounds, there is a simple explanation that has to do with the way crabs breathe.

Read on to learn a little more about crab anatomy and this seemingly odd behavior.

Basically, there are three groups of crabs, each of which is ideally suited to their environment in terms of the way they breathe.

Fully aquatic crabs have gills similar to fish that draw dissolved oxygen from the surrounding water. These crabs cannot readily intake oxygen from the air and can only survive brief excursions on land.

Other crabs are semi-terrestrial and are equally able to survive in the water and for extended periods on land, provided they keep their gills moist.

These species are often found in tidal environments, where they can take advantage of the rich resources.

Still, other species are terrestrial crabs that have lung-like structures capable of taking oxygen from the air in addition to their gills.

While these crabs spend most of their time on land (some cannot even survive in water once they are adults), they still need some method of keeping their gills moist. 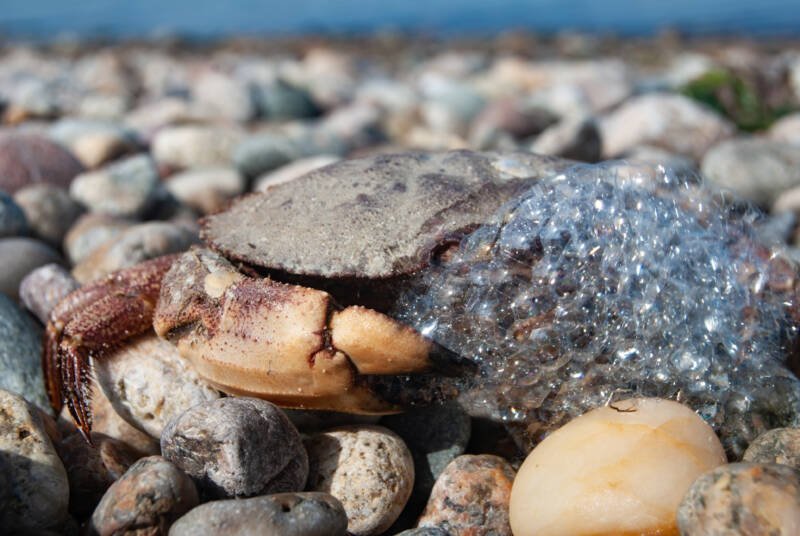 On dry land, all types of crab can display foaming at the mouth.

A living crab produces bubbles as a result of respiration. As crabs release carbon dioxide into the air through the moist barrier of their gills, bubbles will occasionally form.

These bubbles can also help to keep their gills moist and prevent the crabs from becoming dehydrated. Crabs, in general, breathe using gills, much as fish do. The gills of crabs, however, are reinforced so that they do not collapse outside of the water.

These structures can retain water for short periods so that oxygen can be drawn through the moist barrier, thereby allowing the crab to go on land.

Aquatic crabs draw in water through intake apertures located on either side of the thorax underneath and to the rear of the body.

Small appendages resembling paddles move the water over the gills, which then extract the oxygen.

The water then flows from the gill chambers to an anterior tube (exhalant aperture) near the mouth at the front of the body, which opens to the exterior environment. It is from these tubes that the bubbles form, making it appear as though the crab is foaming at the mouth.

This unique crab species has an interesting adaptation to support its burrowing behavior.

During the times this species is holed up in a burrow, the crab can reverse the direction of water flow so that it enters through the anterior tube and exits from the gill chambers. After coming out of the burrow, the water flow will again change direction!

Semi-aquatic and semi-terrestrial crabs, often called intertidal crabs, are those that spend time both in and out of the water.

These crabs breathe through gills that must be kept moist in order to function; therefore, these species are rarely far from water.

Fiddler crabs are excellent examples of semi-aquatic crabs. This species has robust gills that can draw dissolved oxygen from the water when the crab is submerged.

When the crab is on land, its gills are also adapted to draw oxygen from the air.

Terrestrial crabs are those that spend most of their time on dry land. These crabs retain their gills but also have modified brachial chambers that act as a sort of lung.

Hermit crabs draw water across their gills through movement of their scaphognathite.

This movement pulls water in through inhalant apertures located on the underside of the body. Fine setae help guard the apertures and reduce the intake of sediment or small rocks.

The hermit crab can reverse the water flow to help clean the gills and rid them of bacteria and parasites.

This species cannot survive in water after it passes the larval stage; in fact, this species will drown if kept in water for too long.

These crabs have a basic lung system called a branchiostegal lung, which falls somewhere between gills and a true lung and is suited for drawing oxygen from the air rather than the water.

Still needing a coating of water to function, the crab wets its gills using its hindmost legs.

Does Foaming Mean My Crab is Sick?

Not usually. If the crab continues to bubble for an extended period or if the bubbles turn brown, this can indicate that your crab is in distress.

Brown bubbles can mean dehydration, so place your crab in water appropriate for its environment (freshwater, brackish, or marine).

In some cases, such as for terrestrial crabs, providing a humid environment with misting may help.

If returning your crab to water does not help after a time, your crab may be injured or suffering from a disease.

While mouth bubbles may be alarming the first time you see your crab doing it, rest assured that this is a natural process wherein the crab is releasing carbon dioxide as part of its respiration.

Crabs that bubble for too long should be returned to an appropriate water source and monitored for injury or illness.

Let’s hear from our crab owners!

What was your reaction when you first saw your crab foaming at the mouth?