Fish are the focus for many aquariums, what about the humble crab?

These little guys are not only fun to watch, but they are also easy to care for.

Some are fully aquatic, while others inhabit unique environments involving both dry land and water, which allows endless creativity in tank setup. 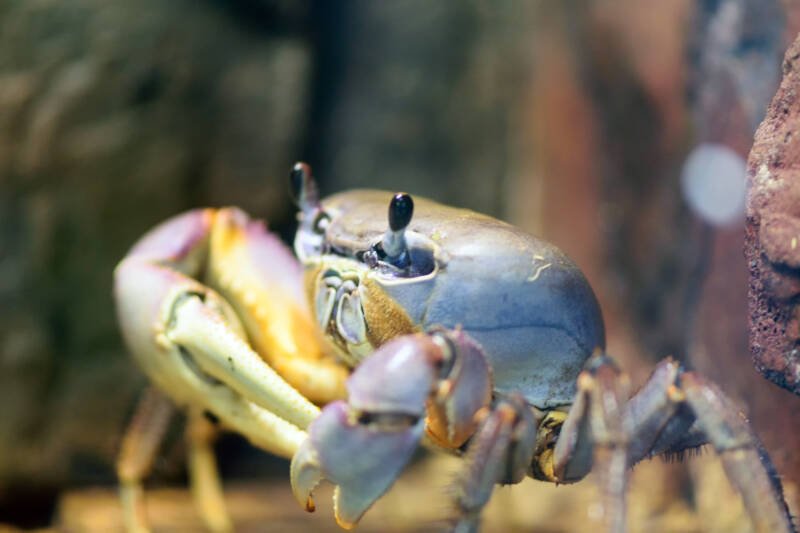 Tank setup varies depending on the species.

Consider whether your crab is fully aquatic or semi-terrestrial and their projected adult size.

Select a tank that is long versus tall to allow more floor space. A tank larger than the minimum size provides space for land and water features.

Clean the tank thoroughly before adding substrate, water, and decorations. 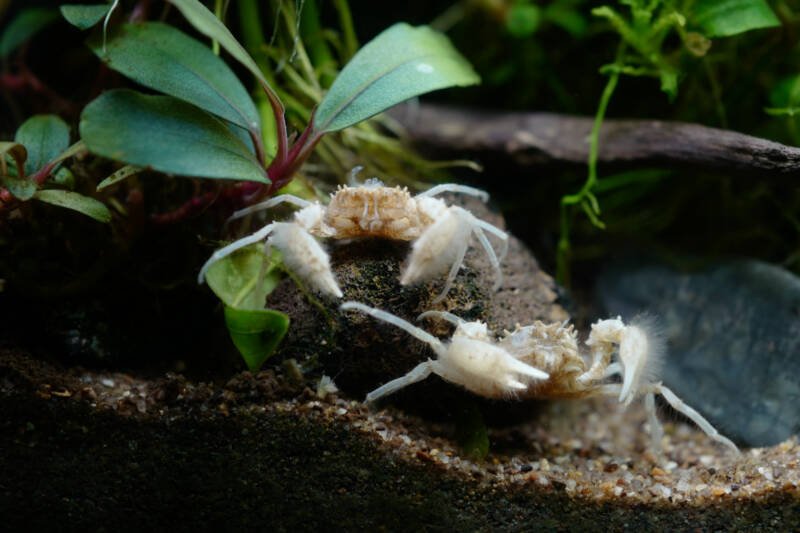 Crabs need hiding spaces, especially during their molt, so include rocks and driftwood.

Secure the aquarium lid, so these escape artists stay put. Set the tank away from direct sunlight.

These crabs need warm water, anywhere between 72 to 82 degrees Fahrenheit (22-28°C). Use a thermometer and heater to maintain the water temperature.

Crabs are sensitive to water quality, especially chlorine, so treat your water beforehand and always cycle the tank before adding your crab.

Some species are best kept on their own, but others can be part of a community tank.

Crabs require calcium supplementation, either from vegetables, such as kale and spinach or from commercial invertebrate foods containing calcium.

Beware of medicines containing copper, which can be fatal.

Below, we present ten species of freshwater and brackish crabs.

Give it a read and consider the possibilities. 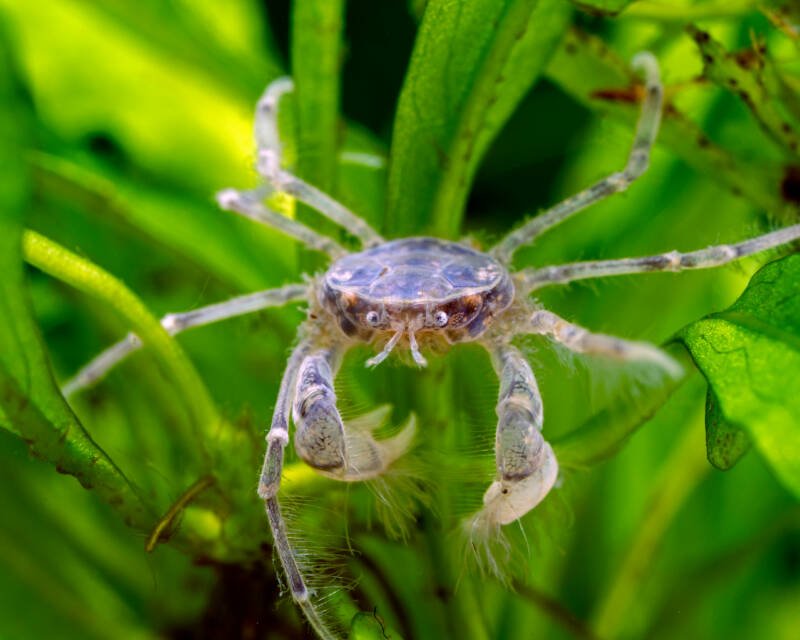 This fully aquatic crab comes from a single, warm-water river in Thailand.

Its adult size of only one centimeter makes it a perfect addition to a nano tank.

Keep these shy crustaceans in a well-planted tank with plenty of places where they can take shelter and feel safe.

Include both rooted and floating plants to provide cover and reduce the light. Gentle water filtration and a covered filter intake are a must.

This tiny crab is vulnerable to being eaten by many fish. Housing them with peaceful schooling fish is the safest option.

They can also pair with ghost shrimp and ornamental snails.

Thai micro crabs are peaceful omnivores that thrive on a varied diet, including algae wafers, bloodworms, and daphnia.

They are not picky, and if you house them with shrimp and snails, they can eat the same food. 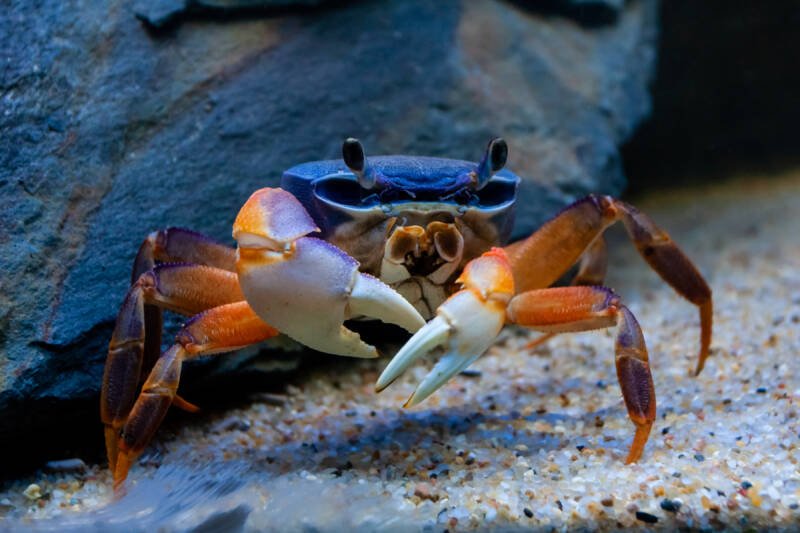 The rainbow land crab is a semi-terrestrial species from brackish river deltas in western Africa.

They grow to four inches (10 cm) in size and can live up to eight years.

Their striking coloration includes a purple-blue body with bright orange legs and very sharp claws, so take caution when handling this crab.

Tank setup should include a significant amount of moist, sandy land with enough brackish or freshwater for them to submerge completely.

These diggers will tunnel in the sandy substrate.

They are not social and may fight if kept in groups. Males can be especially aggressive and territorial.

These crabs can be destructive to live plants and will opportunistically attack smaller species.

Rainbow crabs are omnivorous. Their diet should be a variety of pellets, vegetables, and leaves.

Supplement with protein-rich foods, such as bloodworms, once a week. 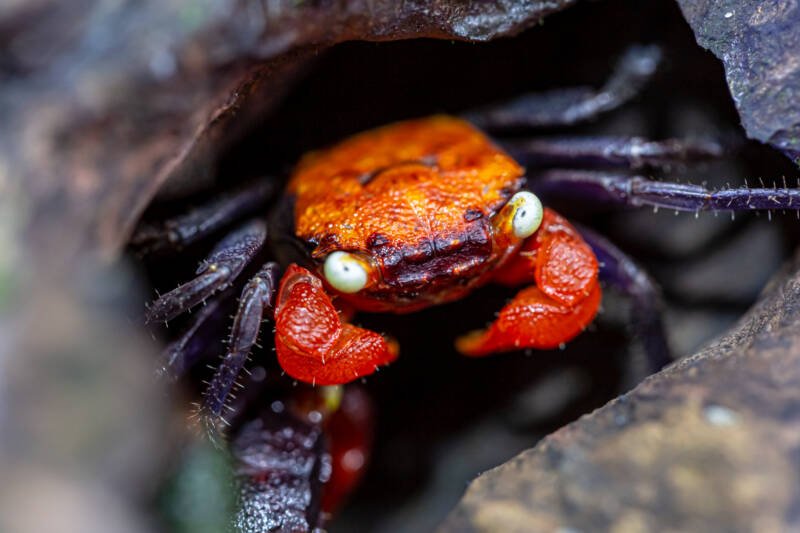 These crabs are native to India and are loved for their deep purple color and bright yellow eyes.

The vampire crab is another peaceful omnivore.

Provide them with commercial shrimp food and supplement with insects, earthworms, blanched vegetables, and algae wafers.

Feed them at dawn or dusk and change up the food location to stimulate searching.

This crab is semi-terrestrial and needs both land and water features in the aquarium.

While a five-gallon tank can work, a 10 gallon is even better.

Include a soft, sandy substrate for your crabs to dig into and complete their molting process. Heavily planted areas, including mosses, are best.

As with the Thai micro crab, these tiny crustaceans may be seen as food by many fish.

They fare well in a group of their own and can pair with various shrimp species.

Do not pair them with snails or with other Geosesarma species, as they may fight. 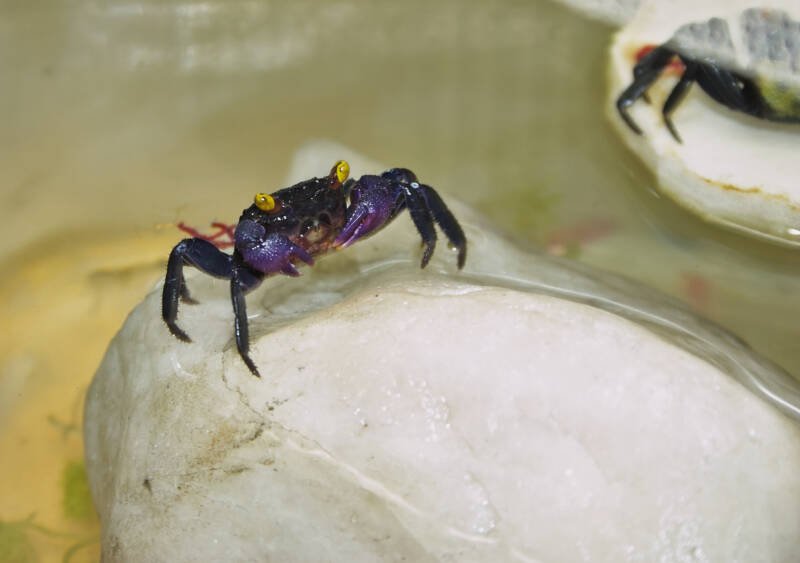 This peaceful crab is a mangrove-dwelling species from Southeast Asia.

They come in a subtle range of colors, including red, grey, brown, or purple.

They need a dry-land setup with water bowls in which they can fully submerge.

The water should be clear (either fresh or slightly brackish), the sandy substrate moist, and the tank somewhat humid.

If you add in plants, remember that this species likes to eat them.

Although they are peaceful, they are not social and can become aggressive as they age.

They are active diggers both during daytime and night.

These omnivores eat vegetable and meaty foods, with an emphasis on the veggies. Regularly toss in leaves, such as almond leaves, for them to consume.

Panther crabs come from a single lake in Indonesia.

With their orange-yellow color and black spots, they reach an adult length of 3 inches (7 cm) in the body (5 inches or 13 cm, including the legs).

These omnivores are hunters that will go for bottom-dwelling fish, snails, shrimp, and other crabs.

In an aquarium, they will eat bloodworms, invertebrate pellets, and sinking algae wafers. Sprinkle the food around the tank to allow them to forage.

They are semi-aggressive and can be very territorial.

Their tank needs to be large enough to allow the crabs to establish territories. It should also include plenty of hiding spaces, otherwise, they may fight.

Panthers spend most of their time in the water but will access dry land from time to time.

Include a turtle basking platform or similar structure in their tank to allow them to get out of the water.

The fiddler crab is a tropical species that loves brackish swampland.

They are semi-aquatic and can breathe above and below the water. The male fiddler crab has one extra-large claw that gives the species its name.

These crabs are omnivores and detritivores, feeding mainly on dead organic matter.

While they are generally peaceful, males can be aggressive with each other.

Their tank setup requires brackish water with a specific gravity between 1.005 and 1.010.

Oxygenate the water with an air stone or bubbler.

Mud and sand are a must, as this species feeds by sifting through the sand. Scatter a mix of shrimp or crab pellets, blanched vegetables, and algae wafers to satisfy this scavenger.

You can house the two-inch-wide (5 cm) fiddler with other brackish fish, such as mollies or guppies, but double the tank size to ensure all species have enough space.

The tiny pom pom crab is a freshwater, tropical species from Africa and Asia.

They grow to a size of one to 1.5 inches (4 cm) and are suitable for smaller tanks.

The feature that gives them their name is a hair-like puff on each claw to trap tiny bits of food.

Place plenty of live plants and moss in their tank to collect food particles.

Pom poms need a vegetable-based diet, including wafers or pellets, with an occasional bloodworm thrown in the mix.

Use neutral pH water for this fully aquatic species.

They are peaceful and pair well with schooling fish that occupy the middle to upper levels of the tank.

Take caution when pairing them with other invertebrates as the opportunistic pom pom can prey on smaller ones.

This semi-aquatic omnivore from southern Asian swamplands splits its time between water and land.

It is easy to see where the crab gets its name – two bright red claws immediately draw the eye. They are a larger species, reaching a size of four inches (10 cm).

The red claw is aggressive and territorial. Therefore, they are best housed in a species-only tank with one male and several females.

If your tank is large enough and includes plenty of hiding places, you can add additional males.

Their tank should have a dedicated, sandy land feature with plants, driftwood, and rocks.

Keep the water brackish and set the salinity to 1.005.

Their diet in the wild varies from detritus to worms, insects, and even small fish. Give them a mix of bloodworms, shrimp, and vegetable-based pellets or wafers.

The Matano crab is named for its habitat of Lake Matano in Indonesia.

It is a fully aquatic freshwater crab prized for its purple-blue color. They grow to five inches in width (13 cm), including the legs.

Tank setup should include a sandy bottom and well-aerated, warm water.

The water should be reverse osmosis/deionized and then remineralized for the crabs’ optimum health.

Matano crabs are climbers and can leave the water from time to time.

Omnivorous and nocturnally active, Matanos will scavenge for sinking pellets and bloodworms. Take out any food they do not consume to avoid decay in the water.

Males can be aggressive and territorial and are best housed singly with multiple females.

Pair them with fast-swimming fish and avoid any snail species entirely, as your crab may eat them.

Aggression is worsened by confined living conditions, so plan on a good-sized tank.

Several species of crab are called “Tanganyika” due to their place of origin in the East African Rift Valley’s Lake Tanganyika.

Platytelphusa armata is the largest of these fully aquatic freshwater crabs and reaches an adult size of two inches (5 cm).

These hardy crabs are a cream or brown color with long legs and strong claws that they use to crush the shells of mollusks.

In an aquarium, they are omnivores that will feed on a variety of foods.

Keep them in a single species tank. In a community tank, they will prey on shrimp, snails, slow-swimming fish, or other crabs.

If males are kept together, the tank should be sufficiently large to allow territories; otherwise, they are best kept singly with a group of females.

Freshwater and brackish crabs can be a fun project for a home aquarium.

There is no end to the creativity you have in arranging their habitat.

With unique coloration and active behaviors, they are sure to bring you joy for many years.

What species of crab have you kept?

Do you have a favorite tank setup for your crabs?