The Siamese algae eater has often been crowned the best algae eater as a result of its peaceful temperament and industrious personality.

This fish has a voracious appetite for algae and will often work tirelessly until your tank is clean. 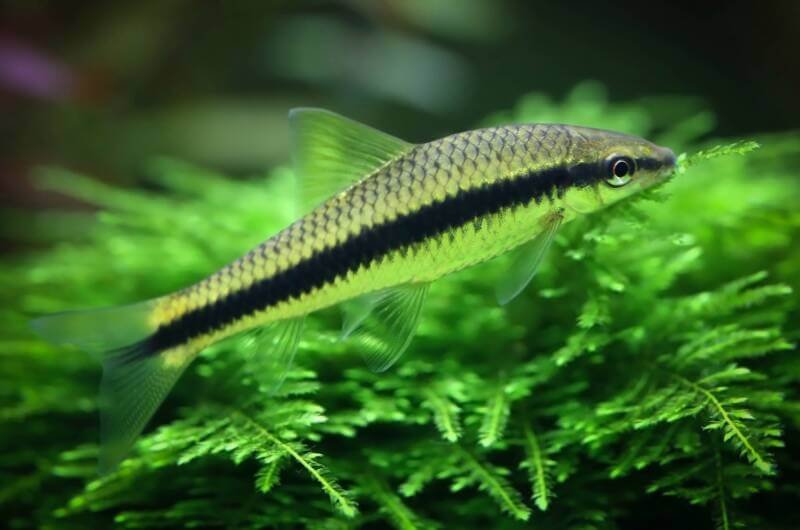 It is pretty active and can be seen swimming in fast circles and swipes along the bottom of the tank floor in search of food.

Though not overly colorful, this fish more than makes up for that with its dazzling personality.

Siamese algae eaters (Crossocheilus siamensis) have a long, thin body that is usually a pale grey, gold, or brown. They also have a thick black stripe that runs the length of their body, from the mouth all the way through their tails.

This stripe is a dependable indicator of health and maturity; it will fade during times of stress or sickness and when it prepares to mate.

They can grow up to 6 inches and live up to 10 years in good water conditions.

Size is the only indicator of sex and doesn’t appear until after three or four years. Females tend to be larger than males, with bodies that are approximately 30% larger or thicker.

These fish are often confused with the Siamese flying fox, a fish that is almost identical to the SAE.

One way to tell is the difference between the two is the presence of corner mouth flaps, which flying foxes have but algae eaters don’t.

However, this can be difficult due to their high activity levels. A more dependable method is to check the length of the black stripe. As stated above, algae eaters’ stripe runs the length of their whole body, while the stripe on flying foxes ends where their caudal fin starts. 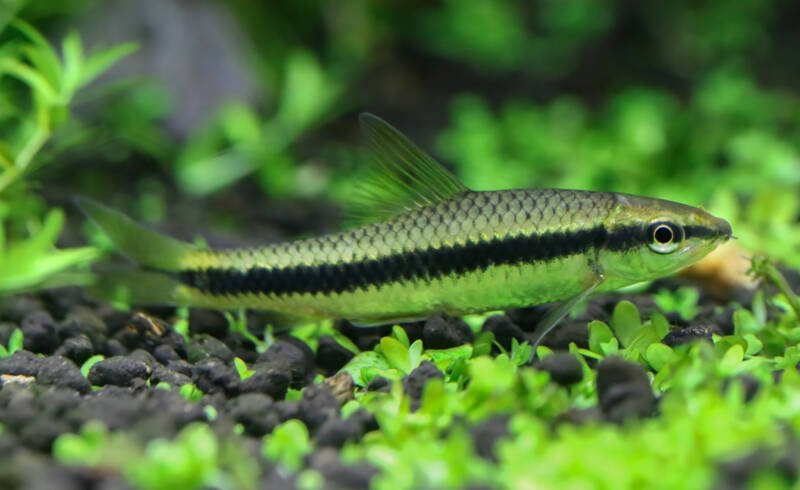 The Siamese algae eater is a social fish that does well on its own, among members of its own species, and in community tanks.

Though not naturally schooling fish, when kept in groups they will display some schooling behavior. They will often eat together and may swim in a loose group.

They prefer to keep to the lower levels of the tank, close to where there are ample cover and food. The substrate, driftwood, and plants are three spots where they love to hide and forage.

Always preoccupied with finding food, this fish is generally peaceful and gets along well with other tank mates. It doesn’t show aggressive tendencies, even as it ages and comes into adulthood.

It’s not known for attacking slow-moving, deep-bodied, or long-finned fish. Instead, it prefers to scour the tank floor for food missed by these inhabitants and its preferred food of choice, algae growth!

Though generally peaceful, it is possible for these fish to become territorial or show aggression. When this happens, examine the fish over several days.

See if the aggression is linked to a specific element of the tank, such as the territory around a piece of driftwood or a specific fish. They may need to be separated from the main tank if the problem cannot be quickly resolved. 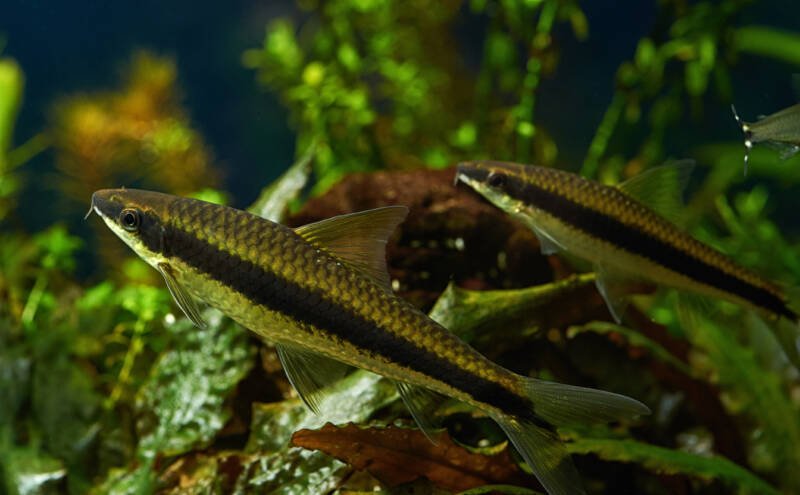 They prefer densely planted streams and rivers. These waters are usually warm and slightly acidic. And though they may have a fast current, the Siamese algae eater much prefers sections that have a low to moderate current.

They will occupy the bottom water level, near the river or stream bed. Here, they have many plants, driftwood, rocks, and other objects that provide shelter and food sources.

However, the algae eater must also venture to the surface when food is not plentiful enough. Algae is more common here, where it can form in stagnant areas.

Once they choose a shelter and become familiar with the surrounding territory, they don’t tend to explore. Instead, they prefer the security of their chosen cave, log, etc.

In the wild, they eat a variety of food, including:

In the aquarium, they will eat all of this and more. Some other foods you may use to supplement their diet include:

They will accept live foods, frozen foods, and even freeze-dried foods.

However, because of their bottom-dwelling nature, it’s important to make sure they’re getting enough to eat. Sinking pellets are one way to do this.

The absolute minimum tank size to keep Siamese algae eaters in is 20 gallons. Keeping more than one algae eater or setting up a community tank will require at least double this, for a minimum of 40 gallons.

Like any other fish, this algae eater produces a decent amount of waste, and so aquarists should watch out not to overstock their tank.

It is fairly easy to recreate the conditions of their natural habitat. If successfully done, owners will have the satisfaction of seeing the Siamese algae eater live up to its active tendencies.

Siamese algae eaters are simple to care for in that there is no specialized equipment necessary to keep them.

However, it can be daunting for beginners to recreate their natural habitat due to the number of related elements involved.

Successfully keeping live aquarium plants and getting the right lighting substrate is the most difficult part of having Siamese algae eaters. In all other areas of ownership, they are low maintenance and easy to care for.

However, hobbyists that extend the effort to create a natural environment for these fish will find it well worth their time. Seeing the active behavior and curious nature of Siamese algae eaters is a rewarding experience. 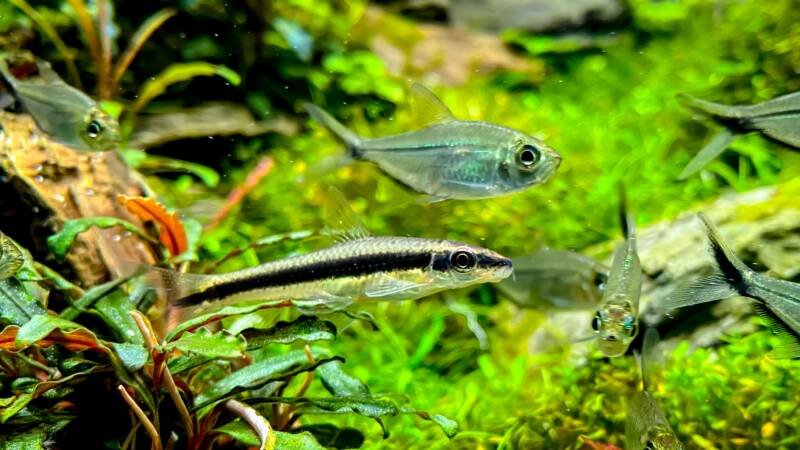 But they do have several preferences that will allow them to truly thrive and show their best colors, figuratively and literally.

Like any other fish, they don’t appreciate high levels of ammonia, nitrites, or nitrates.

Regular water changes and tank maintenance should keep these levels close to 0 ppm, but it’s also wise to perform periodic testing to make sure.

Despite keeping to the lower levels, their high activity level often results in frenetic swimming patterns that may disturb fish above them.

Calmer or shy species won’t appreciate the energy of the Siamese algae eater. Neither will fish that have aggressive tendencies, as they may be triggered by the movements of this algae eater.

But generally, these fish get along well with most inhabitants and are a valued member of community aquariums.

It’s wise to keep only one type of bottom feeder since other species may show aggression towards Siamese algae eaters. Some common considerations for tank mates include:

All of the fish listed above are peaceful fish that also do well in community tanks.

Some of them are schooling species, while others are fine on their own or in mated pairs. Though they may range in how territorial they are, generally they are all nonviolent and will create a beautiful tank.

Siamese algae eaters are a great option for both new aquarists and experienced fish keepers.

This fish is peaceful, efficient, and affordable.

Keeping a tank clean is a breeze with a Siamese algae eater as your helper. Owners also get the added benefit of watching these movers and shakers keep the aquarium active.

They get along well with other peaceful inhabitants and don’t become aggressive as they age, unlike other algae eaters.

Day or night, you’ll be able to see these fish zipping along the bottom of the tank and along leaves in search of food. Though not overly colorful or ostentatious, these fish more than makeup for their appearance with their stunning disposition!