When algae are present in the tank, Chinese algae eaters are one of the best cleaners to employ.

Chinese algae eaters are hardworking and hardy, two of the best traits any fish can have! 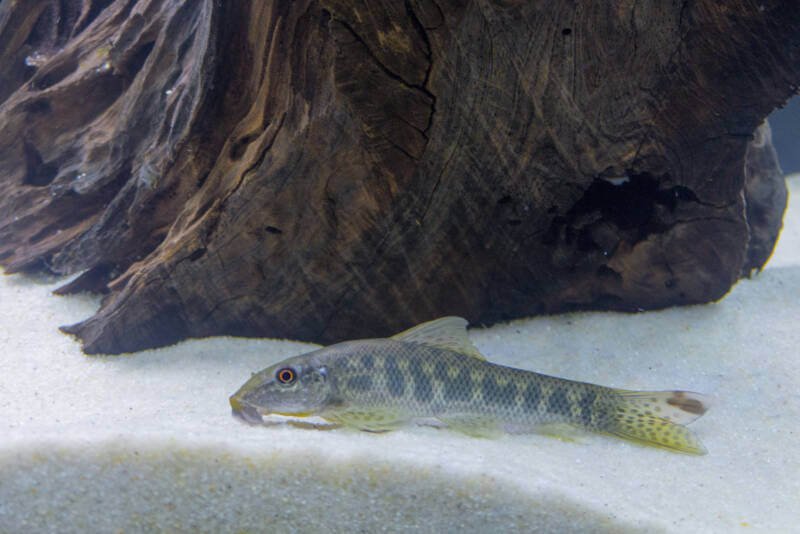 Beginners and experienced keepers alike benefit from their easy care and massive appetite.

But despite these great benefits, there are also some serious drawbacks to adding this fish to your aquarium. 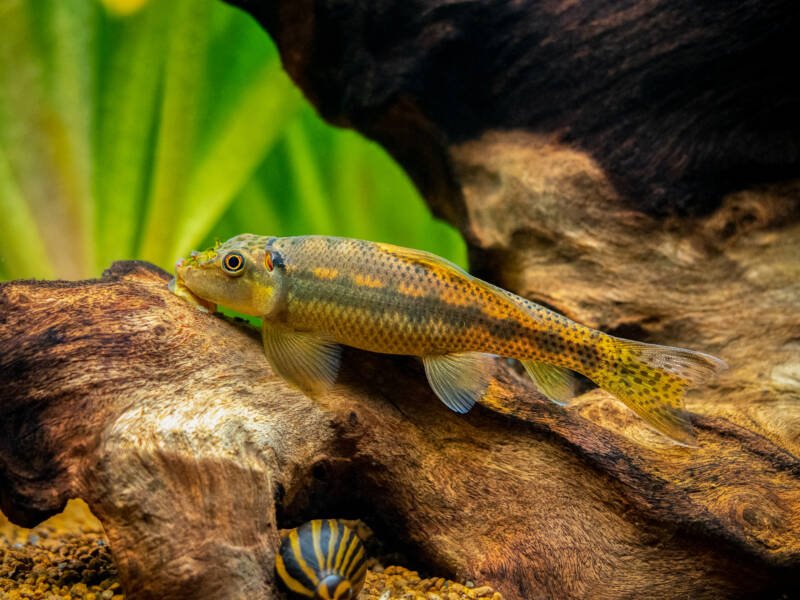 They may also be called honey suckers and sucking loaches, both names which reference their mouth. They have a sucker mouth, like many other algae eaters such as the Siamese algae eater.

However, they do not have barbels or spines, some characteristics common of catfish and similar algae eaters.

They are a pale brown in color, close to tan, with dark spots along their sides.

Their fins are small, narrow, and yellowish in color. The dark spots continue along the fins, though they grow significantly smaller and closer together.

Chinese algae eaters aren’t the most glamorous fish in the world.

But for keepers that want the efficiency of this fish with an added aesthetic flair, Albino Chinese algae eaters are a perfect choice. These varieties are a vivid, solid gold in color. 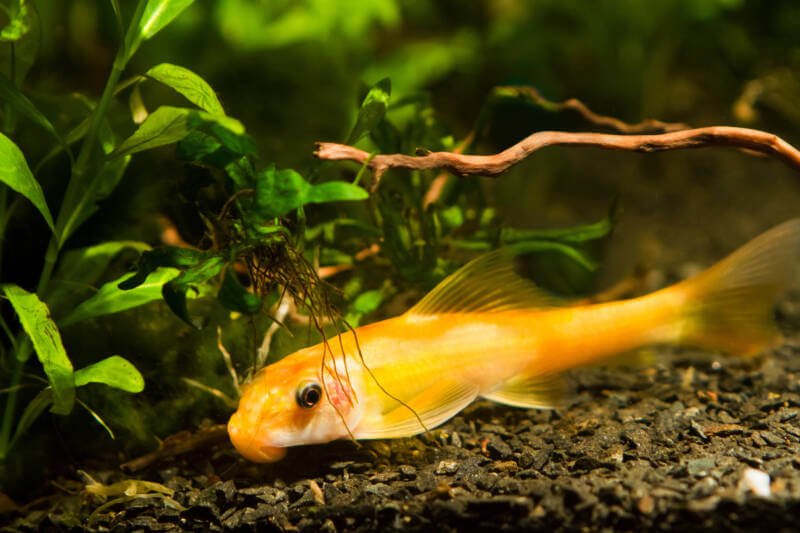 They can grow up to 5” and need quite a bit of space to themselves to spread out and search for food. Giving them more space is also a cautionary measure.

They can grow close to 12” in the wild, so it’s possible for your algae eater to grow an inch or two beyond the norm for captive breeds.

It can be difficult to tell males and females of this species apart.

Whereas both males and females will still be slim and long, females tend to be slightly fatter and rounder.

However, these are not distinct differences and females can be easily confused with healthy or large males.

A more reliable way of sexing is to observe them during the mating season. Males will develop a sort of horn on their heads, which the females will lack.

With the right care and nutrition, these fish can live up to 10 years.

Many keepers have reported Chinese algae eaters living even longer than this if kept in quality conditions.

That’s a decade or more of consistent cleaning, making them well worth the investment. However, it’s also a serious commitment.

There are few other algae eaters (or even fish) that can live as long. Make sure your aquarium is properly set up for a Chinese algae eater.

Chinese algae eaters are lauded for their ability to clean tanks in short periods of time. 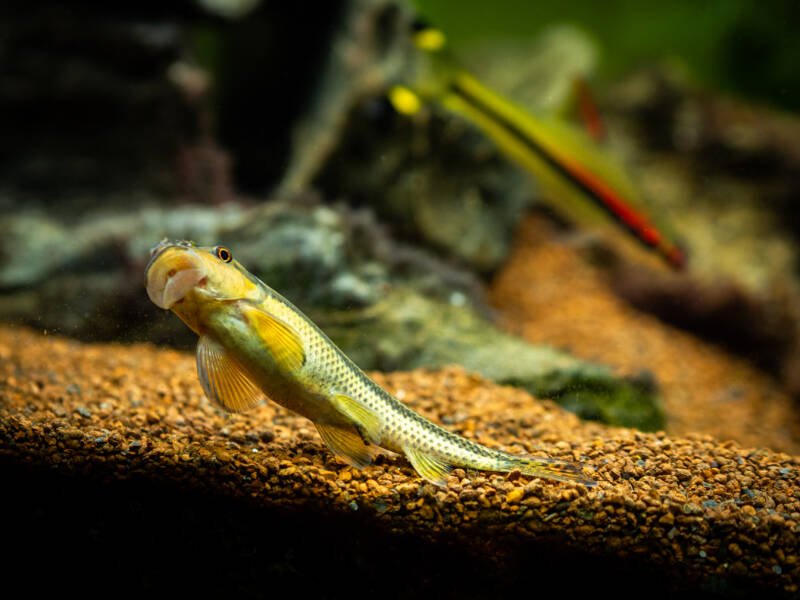 However, they do have some drawbacks. One of the biggest cons to owning this fish is that it’s semi-aggressive towards fish that are similar in size.

These fish are also not prone to schooling or other social behaviors.

So in addition to not liking fish their own size, they also don’t like fish from their own species. They may even take other Chinese algae eaters as a potential threat.

If housed together, they will likely fight. This means that they should be the only bottom-dwellers in your tank!

In the lower levels amongst the substrate, they can search for algae and attach to surfaces without interruption.

When left to their own devices and housed with compatible fish, Chinese algae eaters can actually be quite peaceful.

Compatible tankmates are those that are smaller in size and fast-moving. They also shouldn’t have flat bodies that the Chinese algae eater could latch onto.

For these reasons, fellow tank mates like angelfish, goldfish, and other similar fish aren’t recommended.

Other than needing their own territory, these algae eaters are most known for, well, eating algae!

They’ll happily focus on inspecting surfaces around the tank for food all day. It can be quite entertaining to watch them devour a patch of algae or efficiently sort through the substrate.

Considering its name, most people would guess this algae eater is native to China. However, it’s actually more commonly found in Thailand, Laos, and Vietnam.

In these countries, they inhabit warm and fast-flowing rivers and lakes comprised of sand, driftwood, and some vegetation.

During specific seasons, the waters may flood and become muddy.

To avoid being pulled downstream, the Chinese algae eater makes sure to stay along the bottom of the bed.

Here, there are many rocks and other obstacles to soften the water’s current. They can also serve as anchors for this fish, who can use its mouth for more than eating algae.

Their strong sucker mouths can easily latch onto various surfaces and hold for hours. 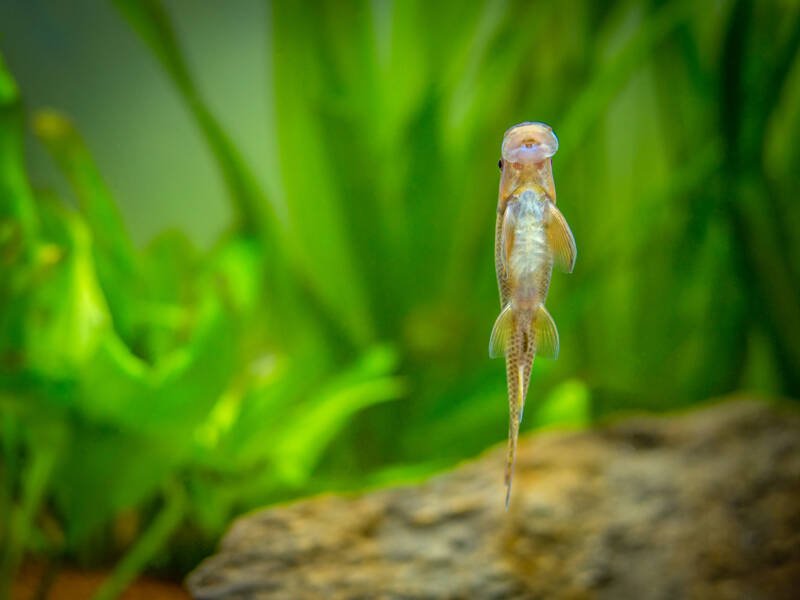 Besides their powerful mouth, Chinese algae eaters also have a protective slime coat on their bodies.

Combined, these two characteristics can make it quick difficult to pull this algae eater off a surface once they’re latched. This is frustrating for both predators and aquarists.

For the Chinese algae eater, you need a minimum of 50 gallons.

When housed in a community aquarium, you’ll need to upgrade the tank size significantly.

If you want to keep other bottom-dwellers, the gallon size will need to be at least doubled to prevent aggression issues.

This is especially true if you plan to keep more than one Chinese algae eater.

They are also better because it is easier to establish strong water movement throughout all levels, which the Chinese algae eaters prefer. 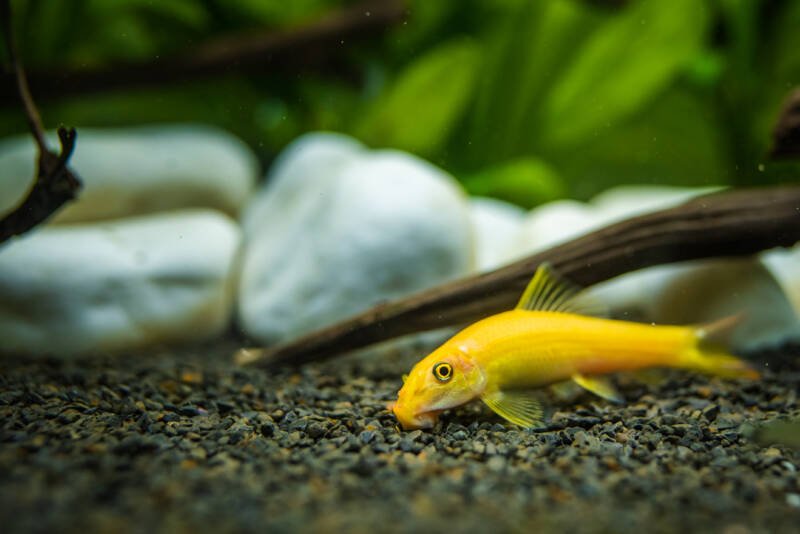 To set up a tank for this type of algae eater, you’ll need the equipment below:

If you gather these pieces of equipment, your tank is as ready as it can ever be for Chinese algae eaters.

It is easy to meet the preferred water parameters of Chinese algae eaters, despite the relative narrowness of the ranges.

Ammonia, nitrites, and nitrates should be kept as close to 0 ppm as possible.

Weekly water changes of at least 25% are necessary.

As you’ve probably guessed, the main component of the Chinese algae eater’s diet is algae.

However, the efficiency of this fish means that algae will quickly become in short supply.

Combined with regular tank maintenance and water changes, there may not be enough naturally occurring food in the aquarium for your algae eater.

Because of this, it’s recommended to supplement this fish’s diet with a variety of other foods. Chinese algae eaters aren’t picky and will eat almost anything. This includes:

Live, freeze-dried, and frozen foods will all be scarfed down in a matter of seconds.

You can also give your fish sinking algae wafers, which is a treat they’re sure to appreciate.

They’ll probably even accept flakes and pellets. However, these aren’t nearly as nutritious as meaty foods.

Chinese algae eaters have serious pros and a few major cons, depending on how an aquarist feels.

These fish are voracious eaters that will diligently clean your aquarium until it sparkles. They love algae and will continue eating it even after they mature.

In addition to this, they are easy to care for and fun to watch.

However, they are also semi-aggressive.

They will attack other Chinese algae eaters and bottom dwellers and may go after fish that are similar in size.

Because of this, they should only be housed with fish that are smaller than them.

This is a definite con. Their appearance, lifespan, and size may also be turn-offs for some hobbyists.