Within the aquarium trade, the glass catfish went through an identity crisis.

After nearly 80 years of being identified as Kryptoptreus bicirrhis, a larger, more aggressive species of glass catfish, the glass catfish got a new name. 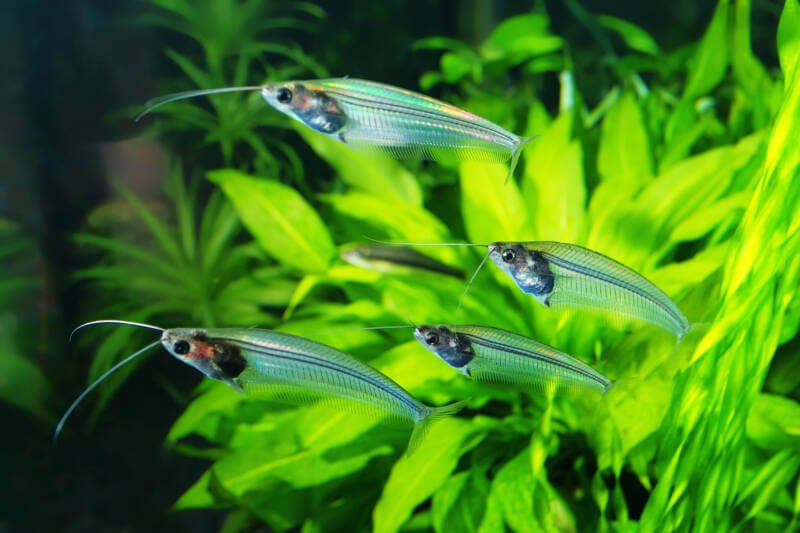 Their scientific name, which breaks down to mean hidden (from the Greek word kryptos) and pterygio (fin), refers to its hardly visible tail fin.

Morphologically, it’s essential also to note the absence of their dorsal fin.

While catfish typically conjure images of a larger version of the freshwater fish, the glass catfish is strikingly different.

These are used to react to magnetic fields within the aquatic environment, which causes them to be particularly sensitive to water conditions.

Similarly to most catfish, the glass catfish also lacks scales. But they lack pigment as well, which explains its striking, clear body color, a useful adaptation to camouflage from predators.

With see-through skin that puts their bones and organs on display, it’s no wonder these transparent fish are popular in the aquarium trade.

Unlike their rock-sucking cousins, the glass catfish also enjoys a free-swimming lifestyle.

A skeleton swimming on display, these fish do best in small schools. As a group, they will reside in the water column and swim actively.

In addition to living in groups, the glass catfish will thrive in planted communities full of vegetation.

With optimal tank conditions and proper care, a healthy glass catfish will grow to about 5” and have a live span of 7 to 8 years.

The glass catfish can be found in Thailand, where they live in streams and river basins in the Cardamom Mountains that open up into the Gulf of Thailand.

Similar to the behavior exhibited in captivity, they inhabit the middle of the water column in these rivers but never stray too far from the river beds.

Glass catfish are selective feeders. In their natural habitat, they can be found consuming a varied diet of mosquitos, larvae, and zooplankton.

During the monsoon season, these fish become active and spawn. 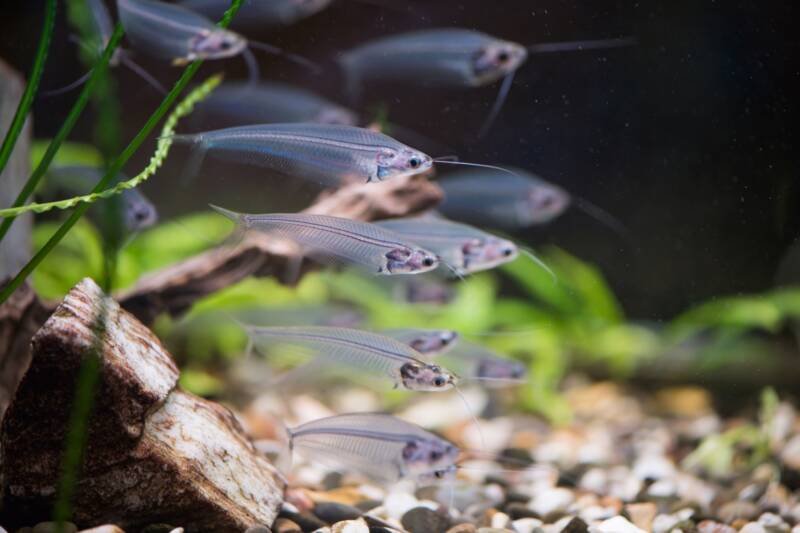 The glass catfish is a calm-natured omnivore, a good fit for community tanks.

In their captive setting, they will continue to exhibit the same behaviors they display in their natural environment. It means these energic fish will actively school together.

It’s also vital to provide vegetation in their habitat as the glass catfish will seek cover behind plants when disturbed.

When introducing your glass catfish to their new tank set up, be aware that they tend to be timid at first. After the initial week or two, your fish will begin actively swimming in the water column.

At a minimum, you’ll need a 30-gallon tank for your glass catfish. It’s best to keep these fish in small groups, around 5 individuals. Promoting natural schooling behavior will help to maintain their health and stress levels.

Ideally, you will want to have 1 glass catfish for every 5 gallons.

For filtration, you’ll want to outfit your tank with an underwater gravel filter.

Besides, you will need an aquarium filter that cycles through the entirety of the tank’s water 3-5 times a day.

The optimal tank environment for glass catfish includes an ideal water temperature of 77F; however, a range of 75-80F is acceptable.

Moderate water flow is best to mimic the currents in their natural habitat, so an average flow works well. Keep in mind these fish won’t be able to swim against a flow that’s too high.

These fish are almost as fragile as they appear as they can be easily cut by rocks and rugged seascapes.

Abrasions and cuts can become infected, so it’s best to opt for smooth gravel or soft sandy substrate from the start.

Adding smooth rocks or driftwood to a tank set-up can provide additional hiding places for the timid fish.

As previously mentioned, vegetated tanks will help to replicate their natural habitat.

However, it is essential to keep in mind that too many obstacles can interfere with schooling behaviors so keep in mind not to overfill the tank with plants.

Hornwort and java moss are two types of live aquatic plants that will keep your glass catfish happy but are also beginner live plants for aquarists with less plant experience.

It is incredibly important to monitor water parameters frequently with this fish species.

A simple test kit should suffice.

There is a small range in which these fish can survive, so there is a slim margin for error. This is the factor that makes the glass catfish a beginner to more moderate level aquarium fish.

Because of their calm temperament, the glass catfish works well in community tanks with fish of similar size and temperament.

They cohabitate well with other catfish, including Cory catfish, mollies, and swordtails.

They are also suitable for other calm-natured fish such as tetras and marbled hatchets.

To create a Southeast Asian themed fish tank, suitable species to pair with the glass catfish include the shoaling Harlequin rasbora, peaceful gourami species, or maybe some of the smaller species of bagrid catfish.

In general, avoid cohabitating the glass catfish with fish that are too large or too aggressive.

A strong flake or pellet food should act as the backbone of their diet.

Some high protein sources such as bloodworms, brine shrimp, and daphnia can supplement the pellets a few times a week. You can go for frozen or live food with these options.

These fish are known not to accept flake food with ease, so when introducing them to your aquarium, it may be best to start with live food and transition to flake or frozen foods.

To make flake and frozen food more attractive, it may help to place the food near a current to active their feeding response.

In general, you’ll want to observe the feeding behaviors of your glass catfish to ensure they’re not getting too little or too much food.

Overeating and undereating can both lead to health issues in these fish.

Sexing of the glass catfish isn’t possible as both sexes are identical.

Breeding is difficult as well; the glass catfish is not often bred in captivity. Though it is possible, it is not well documented, and there is not much information available.

If you are going to attempt breeding your glass catfish, the best way to begin is to mimic regular spawning by adjusting water conditions.

The first step is to drop the water temperature slightly to recreate the time of year in which the fish would typically spawn.

Another recommendation, though it’s efficacy has not been proved, is to do a water change with a small amount of freshwater to replicate rainfall that would occur in their natural environment during the spawning season.

A promising sign that your attempts to initiate breeding are successful is if you see breeding pairs getting face to face and touching each other with their barbels.

If the fish successfully breed, eggs will be deposited on available plants in their tanks, typically leafy plants.

In a few days, the eggs will hatch. If successful, the newly hatched offspring should be started on a diet of juvenile brine shrimp.

The disease is relatively rare in captive glass catfish, though there are still a few to keep an eye out for. These fish can be afflicted by fungus and/or lice.

Signs of fungal growth include grey or white developments on the skin. Symptoms of lice will manifest in your catfish’s behavior, as they’ll attempt to rub on the surface to remove the lice.

Something else to keep an eye out for is ich, where you’ll find a grainy white substance on the surface of the skin.

The individual afflicted may also be seen gasping for air.

Another sign of a sick or stressed-out individual is a loss of transparency as their body turns a milky white. It can also be a sign of impending death related to natural causes.

Another thing to keep in mind is that disease and growth defects can occur when cuts and abrasions are sustained in tanks that are overcrowded or with ragged décor and substrates.

Also, avoid overfeeding and remove uneaten food items from the tank to limit copepods and bio-fouling organisms from moving in.

If you find your glass catfish are exhibiting signs of disease, separate the diseased fish from the healthy population.

It’s clear to see why the glass catfish is famous in the freshwater aquarium trade.

These energetic free swimmers add a buzz of activity to any tank, most excitingly putting on display the intricate workings of the inside of the fish.

The popularity of these fish is largely in part due to their calm nature and their moderate care level, a relatively good fish for beginners.

Outside of maintaining strict water parameters, these fish are considered low maintenance.

They can easily be added to an existing aquarium community only if water parameters have been checked and confirmed to meet the needs of the glass catfish.

Besides, it’s recommended to add them to well-seeded water systems. Adding the glass catfish to newly cultured systems can potentially lead to extreme water fluctuations.

When purchasing glass catfish for your aquarium, you can generally expect to pay between $7-10 per individual.

If you have additional questions about caring for your glass catfish or comments and suggestions on our care guide, please feel free to reach out!