Rippling through the middle of the tank, a curtain of silver and red punctuated with black stands out in beautiful contrast to the surrounding green and blue. 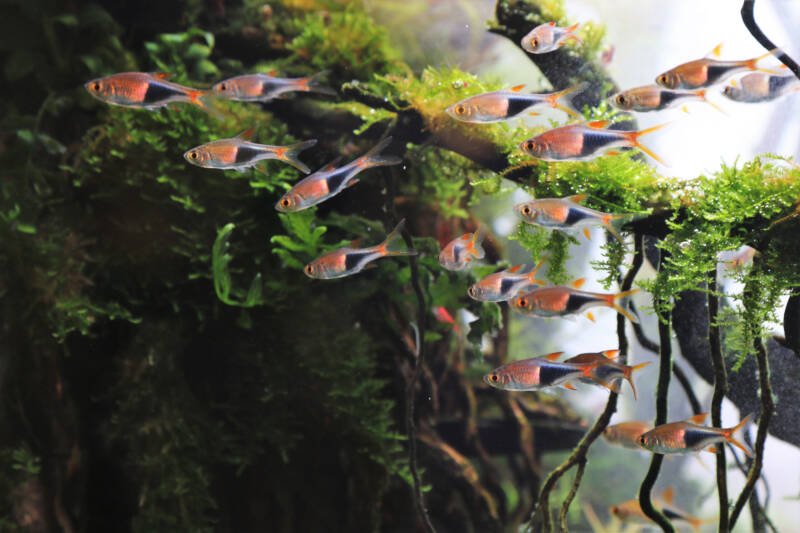 With a look reminiscent of the classic jokester’s costume, the harlequin rasbora (Trigonostigma heteromorpha) from the Cyprinidae family is a favorite fish in many aquariums, not only for its beauty, but also for its peaceful nature, hardiness, and ease of care.

Also known as the red rasbora, the harlequin can survive in a wide range of water conditions, both in temperature and chemistry, making it very forgiving for someone new to keeping fish.

It is an omnivore, and is not difficult to please in terms of food.

Its easy-going disposition ensures it will get along with other species.

As a shoaling fish, it adds interest and movement to the tank’s middle and upper levels.

Read on for more on this excellent addition to your community tank.

In the wild, the harlequin rasbora lives in freshwater streams of Malaysia, Singapore, Sumatra, and the southern portion of Thailand.

The waters of these streams have low mineral content and high levels of humic acids due to flowing through peat swamps.

Harlequin rasboras are a striking reddish/orange and silver color, with the males being more vividly colored and the females more subdued. 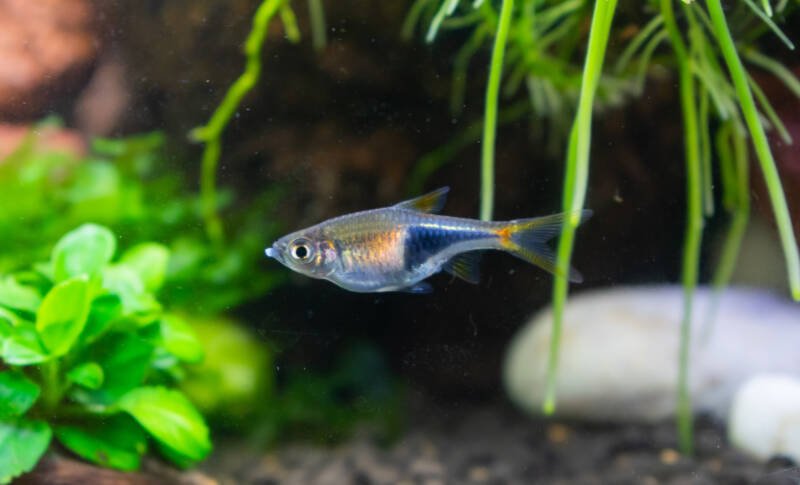 The harlequin’s body and sharply forked tail fins have a red tint. Juveniles are lighter in color and darken as they mature.

The most distinguishing feature of the harlequin is the triangular patch on the hind side of the body. This shape starts near the dorsal fin and tapers to a point near the caudal fin (tail).

On the males, the patch is larger and slightly rounded at the bottom edge, whereas the female’s wedge tends to be straight.

The female is slightly larger and more rounded than the male, especially when they are ready to breed.

Males tend to be slender in shape.

This hearty breed of fish can live in a well-kept aquarium for five to eight years. 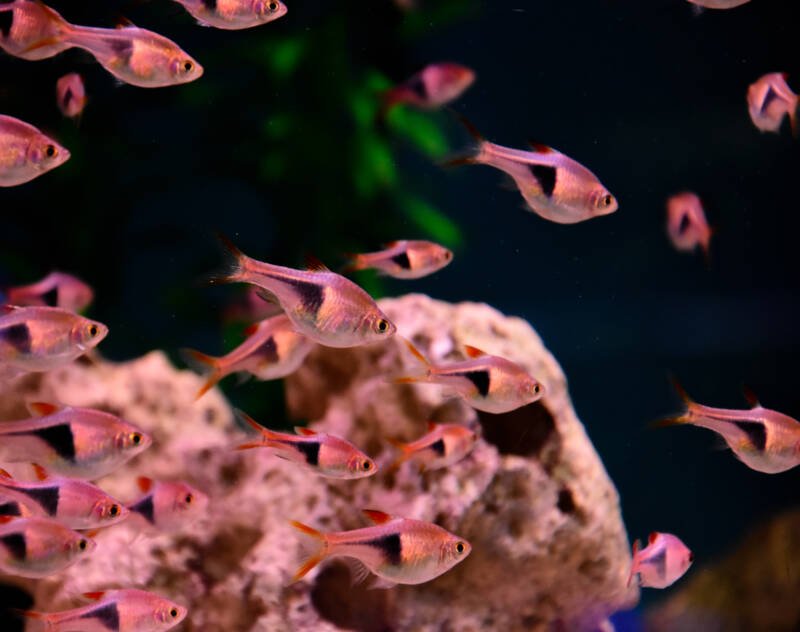 A peaceful and mild fish by nature, the harlequin rasbora is an excellent addition to a community tank.

It will not typically bother other species, although its coloration may attract more predatory fish.

The harlequin is a shoaling fish. Somewhat shy on its own, the fish are quite active in a group, spending most of their time in the middle to upper levels of the tank.

In addition, they tend to show off brighter colors and more exciting behaviors when in larger groups. 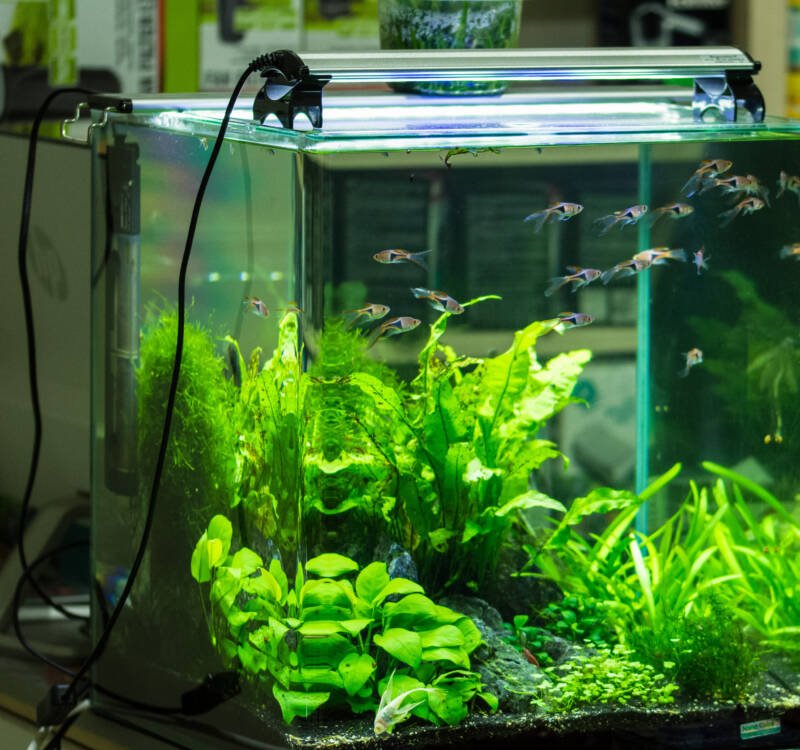 That said, you will want to purchase the harlequin rasbora in groups of a minimum of four to six.

A larger group size of eight to ten is a better choice to allow more natural shoaling behaviors.

Due to their adult growth size of up to two inches, about five rasboras can be kept in a ten-gallon tank, which is the minimum tank size you should consider.

Use the rule of thumb of two rasboras per gallon of water in the tank. Any smaller, and they will not have the ability to exhibit shoaling behavior, which can lead to added stress for your fish.

A larger tank size also allows you to include live plants to give them places to hide and still have enough space for your fish to swim freely.

Your tank setup should contain areas of thicker, live aquatic plants, such as Cryptocoryne or Aponegeton.

These plants exist in the rasbora’s natural habitat, and both prefer subdued lighting, as does the rasbora. The live plants will give areas for your fish to shelter.

Establish both planted areas and open areas for swimming between the plants.

Use a dark substrate (either gravel or sand) and keep the tank lighting low.

The soft, acidic water and low lighting of blackwater aquariums are perfect for harlequin rasboras.

You can keep the pH in a range from 6.0 to 7.8 and the water hardness anywhere from zero to 12 dGH or less.

As long as you keep the tank clean, the water parameters are less critical.

When it comes time to breed your harlequin, however, water chemistry will come into play more.

Change 10–20 percent of the water weekly and change 25 percent once a month. 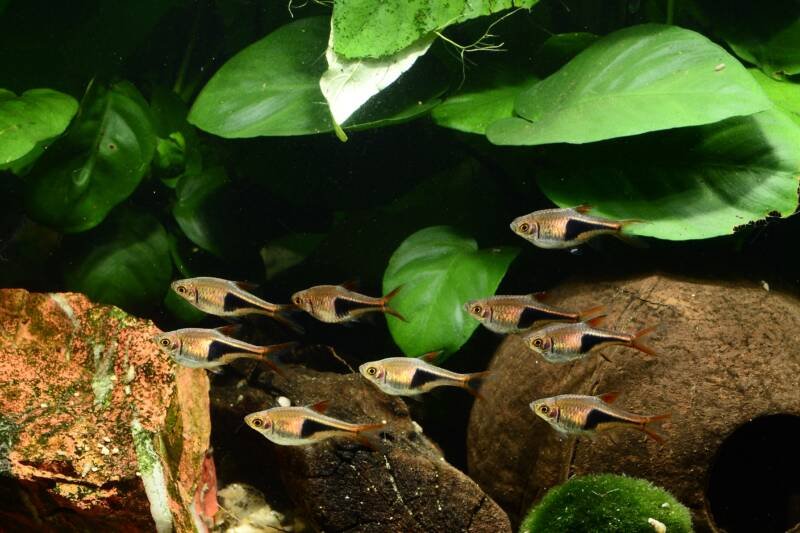 To mimic the fish’s natural habitat of slow-moving waters, your filter should provide a mild current with sufficient filtration and water turnover to keep the aquarium clean.

You may add some leaf litter to the top of the tank or a few floating plants to further mimic their natural habitat.

Rasboras are excellent community tank mates. They are peaceful by nature and can be kept with almost any other fish that is not too large or very predatory.

In addition, they will not nip at or prey on other species in your tank. Consider pairing the following fish species with your harlequin rasboras:

Harlequin rasboras are omnivores and are not typically picky eaters.

In the wild, they eat insect larvae, plant detritus, and other small fish eggs. Basically, they are opportunistic and will eat anything that comes their way.

In an aquarium, they will accept flake or frozen commercial foods.

As with most fish, they thrive on a diet with some variety, including live foods, such as Daphnia, mosquito larvae, and brine shrimp.

When considering breeding your rasbora, you will need to include more live foods into their diet.

Plan to feed your fish twice a day and only provide them as much as they can finish in a few minutes.

Remove any leftover food to prevent excess decay in the tank and keep it clean.

Harlequins can be a challenge for the new keeper to breed successfully.

Differing from other rasboras, the harlequin is an egg layer.

The female deposits sticky eggs on the underside of leaves while the male fertilizes them. Other rasboras spawn and scatter their eggs. 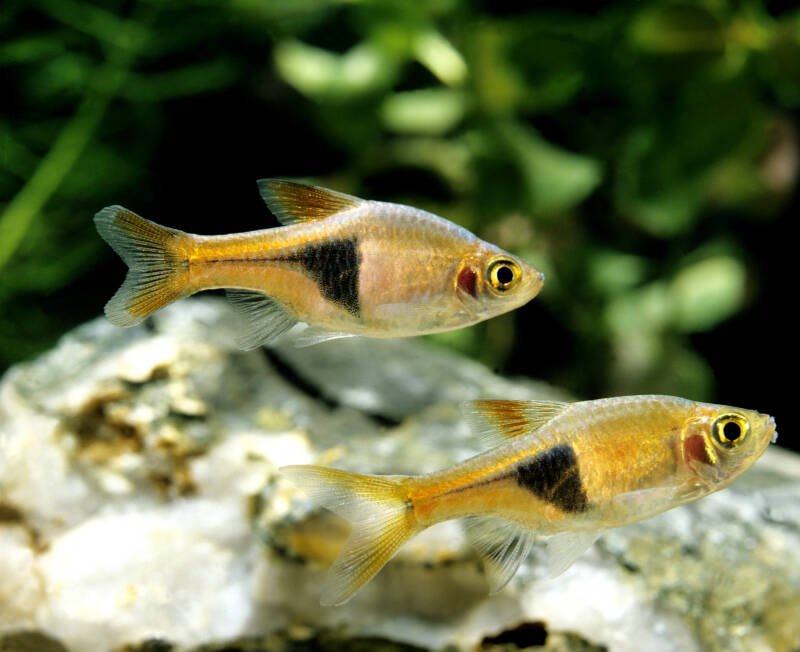 Set Up a Breeding Tank

Prepare a separate tank with the water temperature at the higher range of tolerance (82.4°F or 28°C).

Add live plants, such as Cryptocoryne or Aponogeton.

These water conditions not only impact the likelihood of the fish spawning but can also affect the viability of the eggs.

Some people choose to filter the water over peat to replicate acidic conditions found in the wild.

Prepare and Introduce the Fish

Then, condition the breeding group with a diet containing increased amounts of live foods, such as Daphnia or mosquito larvae.

Plan on two males for each female.Introduce the fish to the tank later in the day as spawning will usually take place in the morning hours.

The male rasbora will show mating behaviors of dancing and shaking to attract the female and encourage her to go beneath a plant to deposit eggs.

To further direct her to a suitable location, the male may nudge her sides or rub her back with his belly.

Once beneath the plant, the female will turn over and rub her belly on the underside of a leaf.

She will lay anywhere from six to twelve eggs as time, while the male fertilizes them.

The eggs then float up and stick to the underside of the leaf.

Eventually, anywhere from 80 to as many at 300 eggs will be laid.

When the breeding is complete, take the adults out of the aquarium. The opportunistic adult fish may eat the small, translucent fry once they hatch, typically within 18 to 24 hours.

The fry are only three to four millimeters long and remain attached to the leaf at first. After another 12 to 24 hours, the fry are free-swimming.

At this point, begin feeding the fry very small-sized foods. Infusoria or commercial fry food are good choices. After seven to 14 days, you can introduce newly-hatched brine shrimp.

The fry achieves adult coloration in eight to ten weeks.

In six to nine months, the young rasboras are mature and can be introduced into the community tank.

In an aquarium setting, the harlequin rasbora is an amazingly hardy fish.

As mentioned before, it can tolerate a wide range of temperatures and variations in water chemistry. The only time that a narrow range of water conditions comes in to play is when breeding.

As with many other species, the harlequin can develop common tank diseases of ich, fin rot, and dropsy symptoms.

However, you can avoid many of these problems with proper maintenance of the tank and a healthy, varied diet for your fish.

Basically, as long as you keep the aquarium clean and your fish eat well, they should thrive.

The harlequin rasbora is an excellent choice of fish for someone new to keeping an aquarium.

They tolerate a wide range of conditions, are peaceful community fish, and eat various foods.

As they prefer to swim in groups, you will want to plan on purchasing a group of at least four to six. With an average cost between two to six dollars per fish, it is not a huge investment.

You will want to spend a little on live plants for your aquarium to give your fish shelter and a more natural feel to their environment.

Have you kept harlequin rasboras?

Have you successfully bred them?

What are your favorite live plants to add to your aquarium?