Shimmering, small, and sporting a sleek streamline, the emperor tetra dances around the tank in darting motions. Light plays off its scales as it weaves among the leaves of plants to rejoin its group.

This tiny species is a freshwater favorite in the aquarium hobby for many reasons beyond its good looks.

The emperor tetra is easy to care for, hardy, and relatively long-lived for such a small species.

It has the added benefit of a wonderfully peaceful disposition, making it ideal to pair with others. Whether you are planning a single species or a community tank, the emperor tetra is a great choice to include. 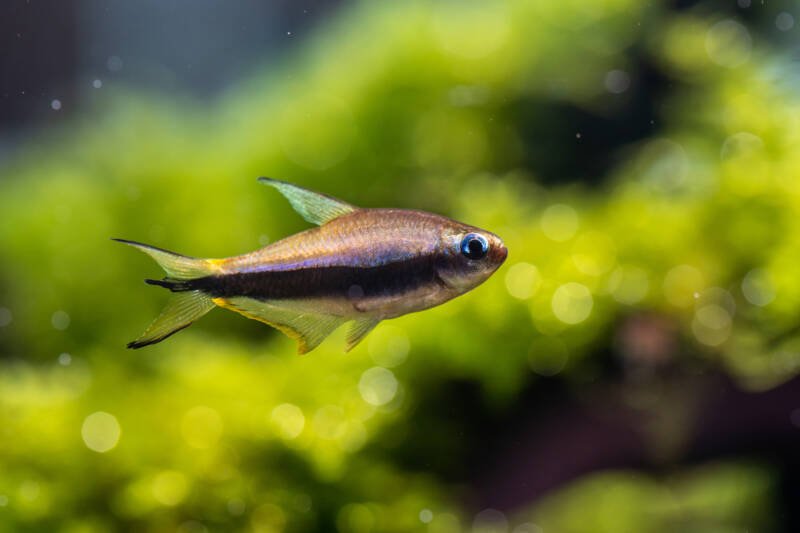 Read on to learn some facts about this tetra species, including how to care for it and tips for breeding.

The emperor tetra’s native habitat is the rivers of Colombia. Its largest numbers exist in the San Juan and Atrato river basins.

These basins contain slower-moving streams and tributaries as well as warmer waters in which the emperor tetra thrives.

The emperor tetra (Nematobrycon palmeri) may not be the flashiest fish around, but there is no doubt it has a regal look.

Taking the traditional royal colors of purple and gold, this fish has a long, slender body with shimmering scales. A thick, black line extends the length of the body from behind the eye all the way through the tail fin.

In some specimens, you might see a blue neon line above the black one and a lighter belly beneath.

A fascinating thing about this fish’s coloration is that it shifts depending on the lighting. In brighter light, the scales can appear almost golden. In dim light, they appear purple.

This tetra’s uniquely shaped fins are a flowing yellow lined with black. The male of the species has longer dorsal and tail fins. 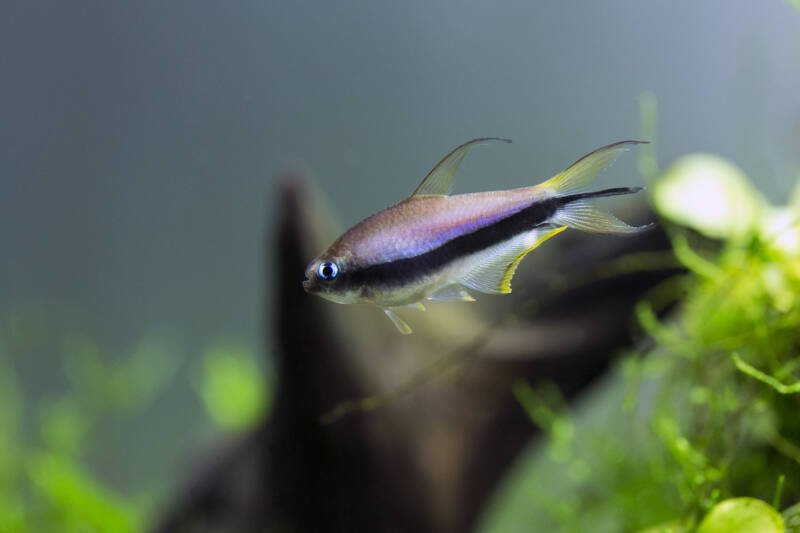 The male’s tail fin is especially attractive as the black line traveling the length of the body continues into a pointed, extended center section, giving the tail a three-pronged look.

Tail shape is not the only difference between males and females. The males tend to be larger and more streamlined, while the females are smaller and more rounded in the body.

Also, the male emperor tetra’s eyes are a bright blue whereas the females’ eyes are green.

The emperor is a smaller tetra species, only reaching about two inches (5 cm) in length as an adult.

Take this smaller size into consideration when selecting tank mates, and do not pair them with larger, more aggressive fish that may view the tiny tetras as food.

How long do emperor tetras live? A well-cared-for emperor tetra can have a long lifespan of up to six years. This is unusual for a fish this small.

As always, keeping on top of water quality, pairing them with appropriate tank mates, and feeding them a high-quality diet can help them live a longer, healthy life.

Emperor tetras are active, darting swimmers that will spend most of their time in the middle to upper levels of the tank.

They will also take time to explore the bottom and swim among the leaves of plants.

Are emperor tetras aggressive? This fish has a gentle temperament and gets along well with other species. Keeping the tetras in a group of five to ten can go one step further toward a peaceful tank.

Males, however, can be somewhat aggressive when they are competing for females or if the tank is overcrowded.

Are emperor tetras fin nippers? Emperor tetras are peaceful toward their tank mates and do not usually nip at the fins of other species if the tetras are kept in a group.

Are emperor tetras schooling fish? Not typically, however, they will often shoal if you keep a large group of them. Having a group of tetras helps to reduce any stress or aggressive behavior.

Follow the general rule of thumb of one gallon of water per inch of fish. The emperor tetra grows to an adult length of two inches (5 cm), so a 10-gallon tank could hold a group of up to five.

More space is always preferred, however, as this tetra species loves to swim. 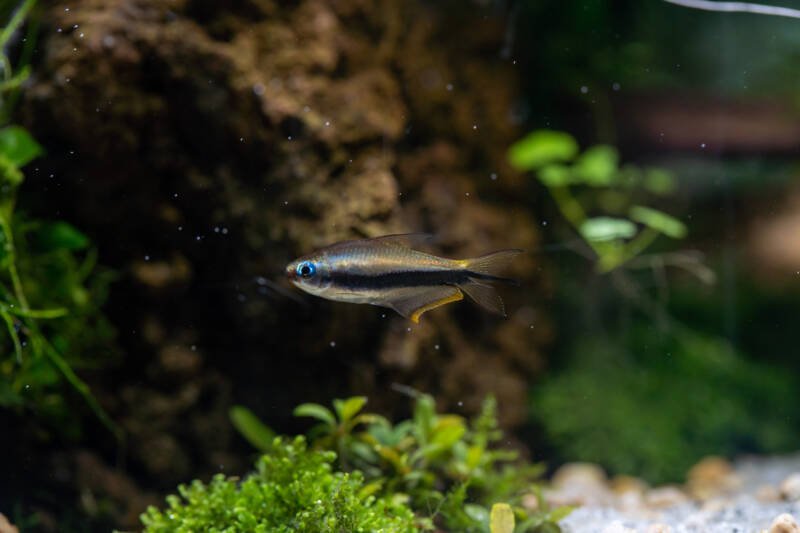 Select a tank size based on the number of fish you wish to keep and whether you plan on a single species or community tank.

A 10- to-20-gallon tank is sufficient for a small group of emperor tetras as a single species tank. Remember that these fish love to swim, so if you can go with a larger tank, that will make your fish more comfortable and provide a good amount of dedicated swimming space.

If you plan to keep them with other species, go with 30 gallons or more.

Line the bottom of the tank with a dark, sandy substrate, which will not only mimic the emperor tetra’s natural habitat, it also provides an excellent backdrop for your fish’s colors.

Then, add plenty of live plants. The emperor tetra enjoys a well-planted tank set up with an open swimming area.

Plants not only lower the light level but also allow plenty of hiding places should your fish feel stressed.

Keep the water temperature in the middle of the emperor tetra’s tolerance range, which is 73 to 81 degrees Fahrenheit (23 to 27 degrees C).

The pH can range from 5.0 to 7.8 and the hardness from 3 to 8 dKH, but as always, try to keep the water parameters consistent. Sudden or drastic changes can impact the health of your fish and make them more susceptible to disease.

Keep the lighting dim, especially if you do not have adequate shade provided by vegetation within the tank. You will find that your emperor tetra’s colors show best with lower light.

The emperor tetra prefers slower-moving waters, so any filter you install should not produce a heavy current.

Consider peat filtration to keep the water hardness moderate and change out a portion of the water frequently to maintain cleanliness.

Because the emperor tetra has a peaceful nature, it is easy to pair with other similarly sized and tempered species.

One good rule of thumb is to choose species that thrive in similar environments, that is, warm, soft water with little current and heavy vegetation. Avoid pairing your fish with overly active or aggressive fish.

Consider the following to pair with your emperor tetra:

The emperor tetra is an omnivore and not an extraordinarily picky one at that. The mouths of these fish are tiny, so make sure that the food you are feeding them is appropriately sized.

A quality commercial flake food can be the base of their diet. They will enjoy the occasional treat of baby brine shrimp, bloodworms, or mosquito larvae.

Will emperor tetras eat shrimp? The emperor tetra will eat baby brine shrimp or other small shrimp. Larger shrimp, however, will be fine in the tank.

The first step to breeding your emperor tetras is to determine which are your males and females. Luckily, there are some easy ways to tell.

The female will be smaller overall, with a comparatively larger abdomen. She will also have green eyes. Males are larger, have blue eyes, and an extended center ray on their tail fin.

To give the fry a better chance of survival, prepare a separate breeding tank.Keep the pH around 7.0, the water soft, and the temperature between 80 and 82 degrees Fahrenheit (27 to 28 degrees C).

Insert java moss, a spawning mop, or live plants. Use filters with minimal current, such as sponge filters or under gravel filters, to prevent the fry from being swept inside.Keep any lighting subdued.

Prepare your fish for breeding by feeding them a nutrient-dense diet, including live foods, for a few days before transferring them to the breeding tank.

You may notice the female becoming more rounded in the abdomen when she is ready to lay eggs.

The process of spawning typically begins in the morning and takes a few hours, during which the female can lay up to 100 eggs. The male will fertilize the eggs as she lays them.

Once spawning is complete, remove the parents from the breeding tank to prevent them from eating the eggs. The eggs should hatch in one to three days.

For the first week, leave the newly hatched fry alone to feed off their yolk sacs.

At that point, the fry will become free swimming and you can feed them infusoria.About a week later, you can transition them to newly hatched baby brine shrimp.

Maintain the water conditions of the breeding tank through regular, weekly water changes. This is especially important to the development of the fry as a drastic increase in acidity or ammonia can negatively affect them.

Once they have grown to an adequate size (ideally larger than the mouth of their parents), then you can consider introducing them to the community tank.

These fish are extremely hardy. As with any freshwater fish, they can contract common tank diseases, such as ich, if their diet or water conditions are poor.

Ich can be treated by isolating the infected fish and treating with in-water medication.

Another ailment to watch out for with emperor tetras is the parasitic gill fluke.

Treat your fish quickly with medication as secondary infections arising from the wounds left by these parasites can be fatal.

The emperor tetra is a great choice for your single species or community tank.

Easy to care for, lovely to look at, and peaceful toward other tank mates, it is easy to see why the emperor tetra is such a popular choice for both beginner and experienced aquarium keepers alike.

Send us a message below and tell us about your experiences raising emperor tetras.

What is your favorite choice of tank décor to highlight this fish’s coloration?