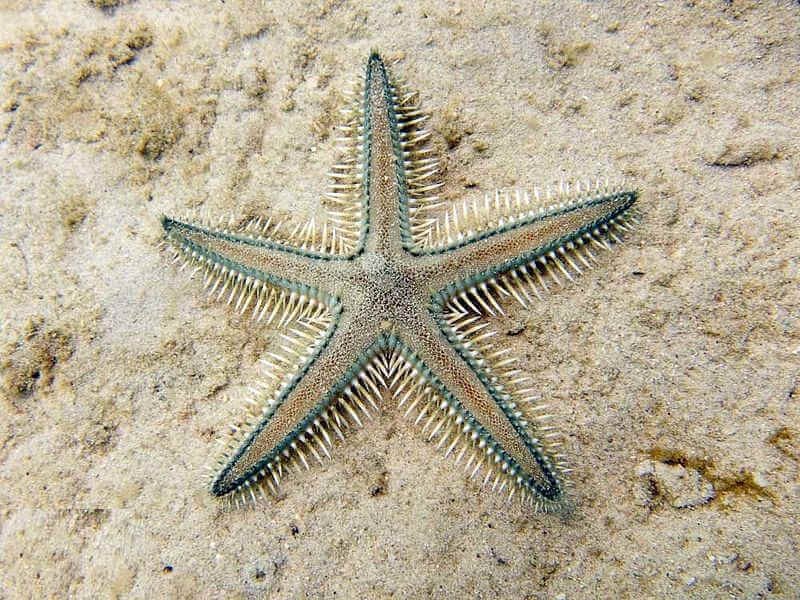 In the wild, sand sifting stars are found widespread across the south east Atlantic ocean, and the Indo-Pacific. They are found in the sand beds of the water, and often hang around rocky areas. They are usually under a few inches of sand, with not much of them appearing on the surface.

How big does it get?

The Sand Sifter starfish can get up to 12 inches wide, however generally stay smaller than that. When you buy them, they are usually around 4 inches in diameter, and grow quite slowly when in an aquarium setting.

The average life span is around 3-5 years, however sometimes they are reported to live up to 10 years old. The exact maximum lifespan is not exactly known. Some aquarists who put them in relatively new aquariums are only able to get them to live for around 6 months, which is generally due to the lack of food.

The sand sifter is a peaceful star, which would never harm a fish. They are able to live in a tank with many other tank mates, and live with any common members of a clean-up crew that you should have in your reef.

A tank that houses sea stars should be at least 10 gallons or 40 liters. I have a tank slightly larger than this and I am happily keeping two.

The temperature should be between 72-78° Fahrenheit to make sure that the star is comfortable.

These should be housed in a fine sand substrate which is at least an inch deep. As they are under the sand bed, they do not really have a preference in the filtration, water flow or lighting.

They are unable to get over obstacles – such as rocks – so if you are keeping these on their own it would not be ideal for them to be in the tank.

A sand sifter is very susceptible to changes in water levels.  When you first get the star make sure to drip acclimate it for a long time.

Avoid natural predators that eat invertebrates, such as trigger fish and puffers.

As a good member of the clean up crew, these starfish eat any detritus that are within the sand bed. They also eat any left over food, such as shrimp, that are not eaten by the main fish within the tank.

You want to make sure that there is enough food for them, otherwise they will burrow and begin to decay eventually.

When breeding, one star would lay eggs and another one would incubate them with its sperm.

Within an aquarium habitat the fry will be free swimming and as a result would get eaten, most likely not surviving. Within a tank, breeding is incredibly difficult for this exact reason.

These stars are incredibly hard to sex, with males and females not looking vastly different. There are no defined characteristics between the sexes. This is another key factor that makes breeding incredibly difficult within a reef tank.

Overall, this is a great starfish to add to any marine reef tank. They are great for beginners, not being too difficult to keep. They do the best in well established aquariums with a large amount of food for them to eat, so would love to be added to an existing reef. You would expect to pay around £10 for a sand sifter in my area.

If you have any questions or comments about this species please feel free to leave them below!