Beloved for their expressive faces and playful interactions, puffer fish are eye-catching additions to home aquariums.

Worldwide, there are more than 120 species of puffers.

While most are marine inhabitants, there are also freshwater and brackish water species. 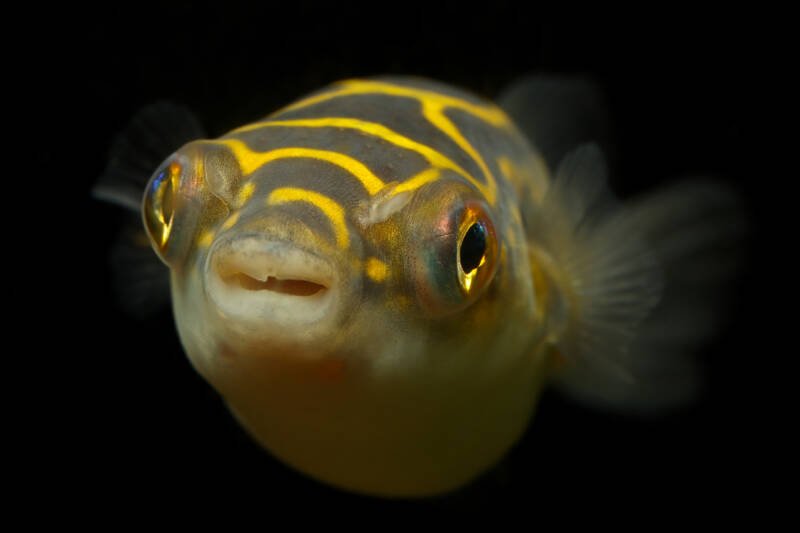 Some are omnivorous, but they are mostly meat-eating predators that catch their prey using open water, stealth, and ambush techniques. In an aquarium, they are handy at controlling pest snail species.

As amazing as they are, puffers have some unique care requirements that make them best suited for those with some aquarium-keeping experience.

These fish are sensitive to shifts in water quality, particularly nitrates and ammonia, and their messy eating requires robust filtration of aquarium water.

They require a regular diet of live and hard-shelled foods to keep their always-growing teeth worn down to a healthy level.

These fish need room to swim and a large tank for their size. Overstocking leads to aggression and some species are best housed alone.

Keep in mind that the minimum tank sizes listed in this article are for a single puffer.

Below, we introduce 12 fresh and brackish water species to consider. 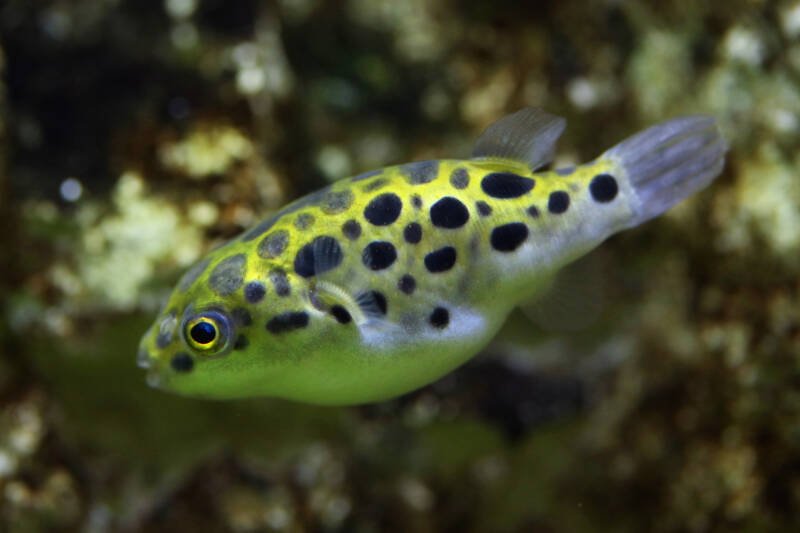 The green spotted puffer spends its life in southern Asia’s brackish waters, heading into freshwater only to breed.

This long-lived fish reaches an adult length of six inches (15 cm) and can grace your tank for up to 10 years.

An extremely aggressive species, this one is best kept on its own.

It needs a warm water, brackish setup with excellent filtration, and a moderate current.

This species is mostly taken from the wild, so replicate its natural habitat with a well-planted tank and plenty of rock hiding places.

Their diet is omnivorous with a heavy focus on meat. They need regular live prey to hunt as well as prey with hard shells. 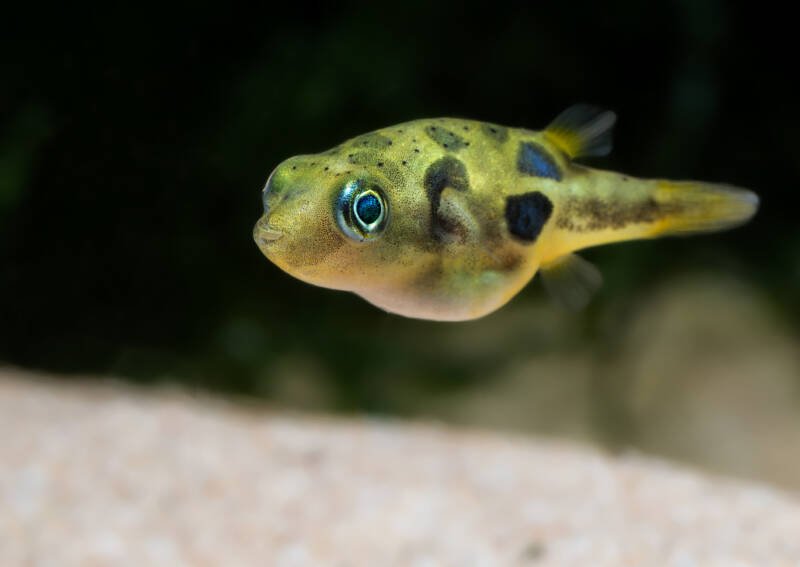 The pea puffer is a tiny but fierce species from slow-moving rivers in southern India.

Aptly named, this fish has a light green color with black dots.

You may also see it under the scientific name Tetraodon travancoricus as well as the common names of dwarf Indian puffer, pygmy puffer, or Malabar puffer.

This active, intelligent fish has a lively personality, but is aggressive and should be housed singly or in a small group.

It reaches an adult size of only one inch (2.5 cm) and is suitable for a small, well-planted freshwater tank.

The carnivorous pea puffer needs live foods, such as snails and worms, to stimulate its natural hunting instincts.

This fish will also accept frozen foods and snacks on snail eggs. 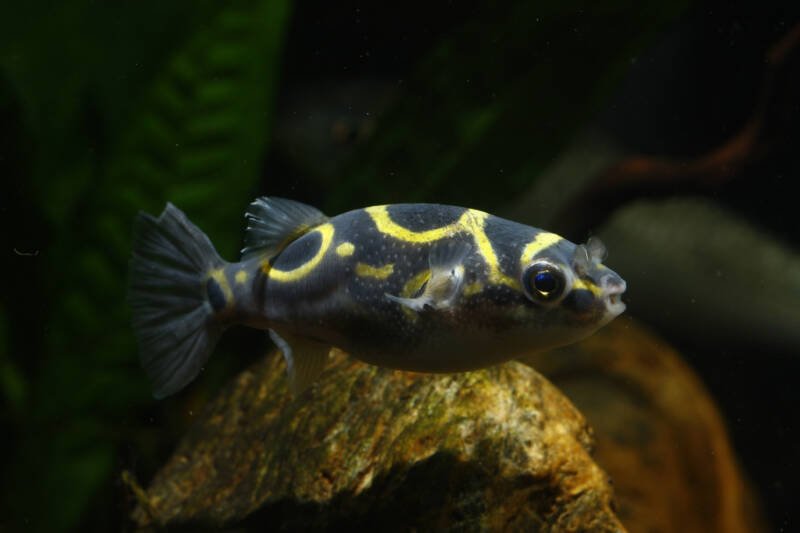 The eyespot puffer is frequently called the figure eight puffer.

Its eye-catching patterns in black and yellow, combined with its expressive facial features and playful personality make it an aquarium favorite.

Native to southeast Asia, this small, brackish water fish only reaches 2.5 inches (6 cm) in length and is suitable for smaller tanks.

Keep it on its own or with other, small brackish species.

Note that eyespots can attack their tankmates as they age or if they are insufficiently fed.

Figure eight puffer loves to eat snails and needs plenty of live foods in its diet for hunting stimulation.

This smart fish needs swimming space as well as added plants or decorations to explore.

The Congo puffer is a freshwater fish from the warm waters of central Africa.

Another mid-sized species, this one grows to an adult length between five to six inches (13-15 cm).

This fish has a fascinating hunting behavior. They partially bury and camouflage themselves while waiting to ambush prey.

Their attack can be sudden and prompted by movement; therefore, it is best to house this species alone.

With this hunting method, the ideal tank setup is one with a good amount of soft sand substrate.

To replicate their natural habitat, the tank needs a moderate to strong current and highly oxygenated water.

Feeding this fish means plenty of live prey, including snails or mollusks. 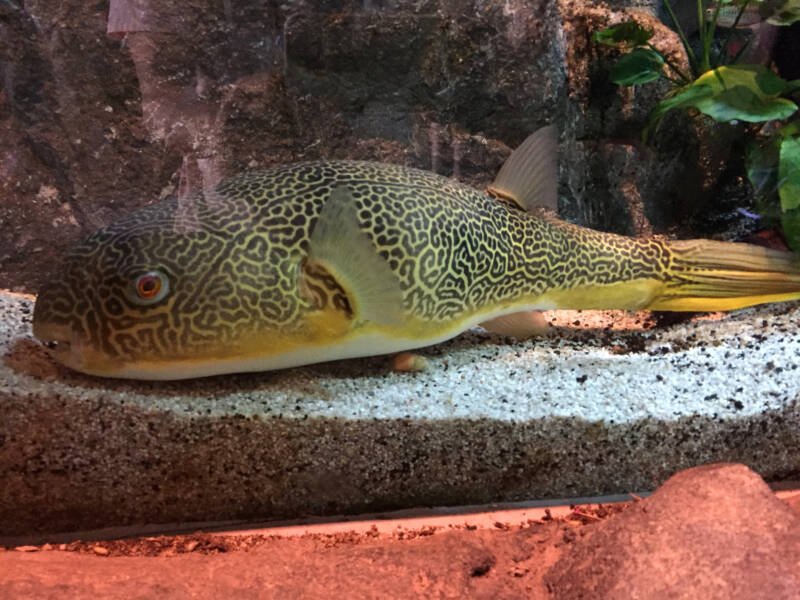 The largest of the Tetraodon puffers, this challenging fish is best for those with experience in aquarium keeping.

MBUs are freshwater fish that live in African lakes and rivers. They are wonderfully playful and love to interact with their owner.

These fish are a deep green color on the back and lighter yellow on the belly with intricate, light-colored swirls on the back.

With that size, they need a huge, heated, warm water tank with excellent water quality and filtration.

This species dines primarily on mollusks and shellfish and must be fed multiple times a week. 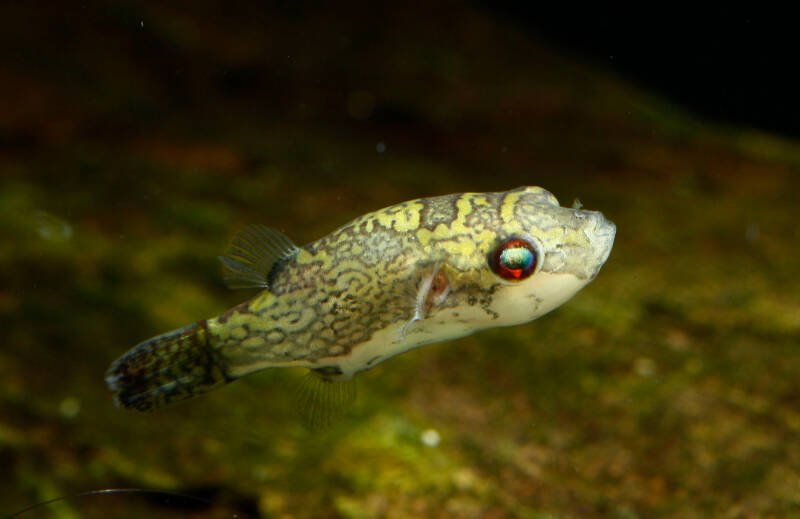 Also called the red-tailed red eye puffer, this Indonesian dwarf species is similar in coloration to the red-eyed puffer.

They are sexually dimorphic as well, but less brilliantly colored.

These fish have a milder temperament as opposed to other dwarf species and can coexist in groups as long as there is sufficient tank space for the fish to establish territories.

They grow to an adult length of two inches (5 cm) and can also be paired with fast-swimming fish, such as tetras, barbs, and rasboras in a well-planted, freshwater community tank. 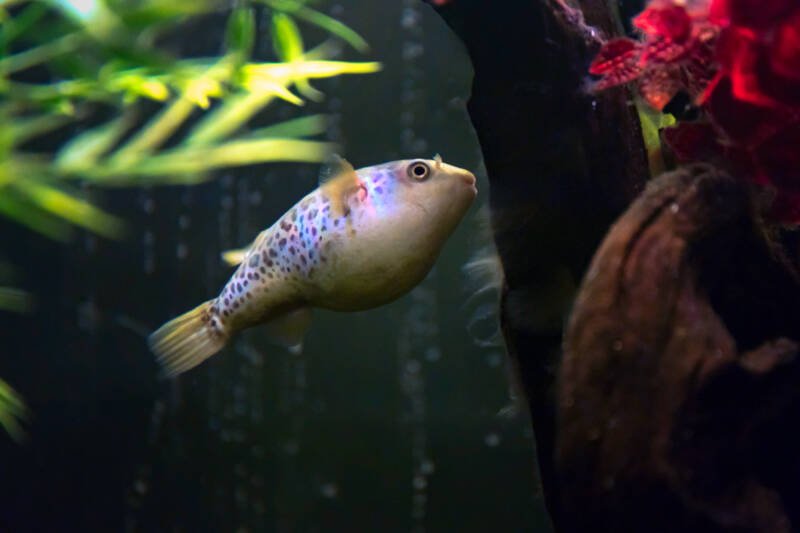 The South American puffer, also known as the Amazon puffer, is a peaceful species that grows to a length of three inches (7.6 cm).

It has a rounded body with a golden color and black bands resembling a bumblebee.

Its temperament makes it an excellent community tank fish with some caveats.

South American puffers also do well in groups in a well-planted tank.

This freshwater fish should not be kept alone! They are intelligent and need a stimulating environment and a good amount of swimming space.

Although they favor live, meaty foods, they will also accept frozen foods.

Ocellated puffer, sometimes listed as Tetraodon cutcutia, is not common in the aquarium trade.

It grows to a length of six inches (15 cm), has a dark green back and cream-colored belly, and oversized red eyes.

This fish inhabits warm brackish and freshwater areas in Asia and India.

While best kept alone or with others of its kind, it can be placed in a sufficiently large community tank with plenty of hiding places and decorations that break up the line of sight.

This puffer is one of few that can breed in captivity, with the male taking the responsibility of guarding the eggs.

They need mostly live foods in their diet, including shrimp, crab, and crayfish. 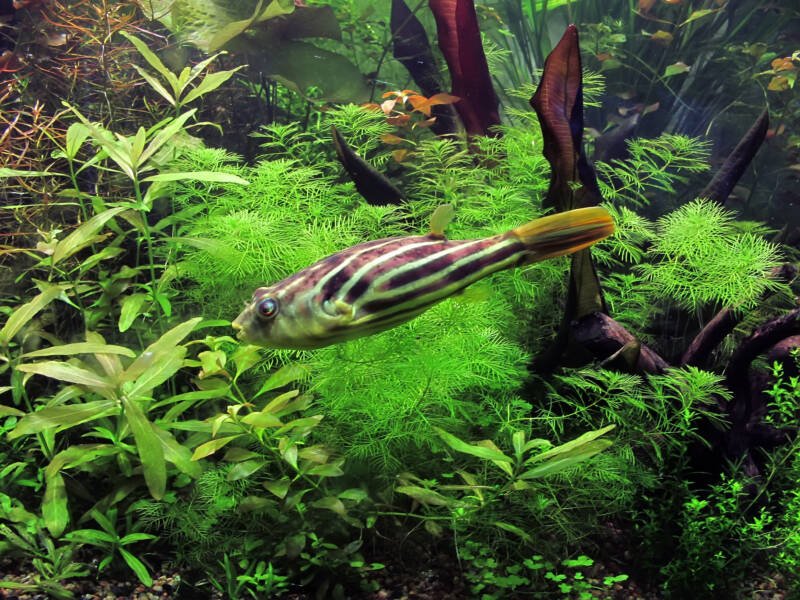 The Fahaka puffer is a freshwater fish native to the Nile River.

Also known as the Nile puffer, it is a large, strong predator that eats snails, crabs, shellfish, and insects.

These fish are beloved for their playful interactions with their owners.

However, they are aggressive toward other fish and are best housed alone, unless the tank is a good deal larger and any puffers’ tank mates are fast swimming.

Live plants can be added, but keep in mind that this fish may damage them as it feeds.

This freshwater fish from the Kerala region of India is also known as the dwarf Malabar puffer.

It is a tiny fish, only growing to a length of one inch (2.5 cm), and is often confused with the pea puffer (Carinotetraodon travancoricus).

While they are freshwater, they tolerate brackish conditions in the wild.

Male imitators are bright yellow and the females have dark spots.

You can keep a group of them in a tank, but ensure you have plenty of hiding places and break up the line of sight, especially if you have more than one male.

Decent filtration is needed with all puffers, but with this tiny species, make sure that the intake is covered.

The target puffer is also called the twin spot puffer or the eyespot puffer, not to be confused with Tetraodon biocellatus.

This fish is a dappled green, tan, or gold color with red irises and a similarly colored eyespot located near the tail.

In the wild, this fish lives in both freshwater and brackish environments in southeast Asia.

They are highly aggressive fin nippers and are best kept alone or in a single species, well-planted tank.

If you place them in a community tank, pair them with fast-swimming fish.

Give this nocturnal hunter plenty of hard-shelled foods. It loves clams, ghost shrimp, snails, and mussels.

Every now and then, toss in some vegetable matter, such as a pea, to round out its diet.

Another dwarf puffer species, the red-eyed puffer is also not common in the aquarium trade.

They are very aggressive fish, both toward any potential tank mates and toward their own kind.

Even males and females of the species are difficult to keep together. Plan on a small tank with a single fish of its species.

These fish grow to about two inches (5 cm) in length.

Another sexually dimorphic species, both have mottled coloration and startling red eyes.

The males are a green/brown color with thick, wavy lines, while the females are brown with thin waves.

These nocturnal hunters need live prey, although they will accept frozen meaty foods.

Make sure that hard-shelled foods are small enough for this fish to consume so that they grind down their teeth adequately.

The following are some questions you may have regarding puffer fish.

Can freshwater puffer fish live with other fish?

The short answer is that puffers are predators and naturally tend toward territorial and aggressive behaviors.

Some puffers are best suited in a tank on their own and cannot even tolerate another of their own species, while others can be paired with their own kind or fast-swimming species.

Can puffer fish live with guppies?

No. Guppies have two traits that make them irresistible targets for your puffer fish: they are slower swimming and they have long-flowing fins.

No. Goldfish and puffers have different water temperature needs.

In addition, the puffer may nip at a smaller goldfish’s fins.

A larger goldfish may attempt to eat the puffer, which could result in injury to the goldfish. It is best to keep them in separate tanks.

What size tank do you need for a puffer fish?

Tank sizes for these fish can vary widely. On one end of the spectrum, you have the tiny dwarf species, some of which do fine in a 10-gallon (38 l) tank for a single fish.

In any case, research the breed and their projected adult size. Do not be fooled into thinking the tiny fish you pick up from the breeder will stay that small.

These species need plenty of swimming space, and many need plants and other decorations to provide a stimulating environment.

If in doubt, go with the larger size aquarium.

Most puffer fish species produce a toxin called tetrodotoxin using bacteria in their environment as part of their self-defense mechanism.

This toxin is so potent that small amounts can impact the central nervous system and prove fatal.

Puffer fish should not be touched with bare hands. To avoid the potential of contact, as well as injury to the fish, use a container (not a net) to move your fish.

Drop us a message below! What are your experiences with keeping puffer fish?