Bamboo shrimp are one of the most beautiful species of shrimp available in the trade today. 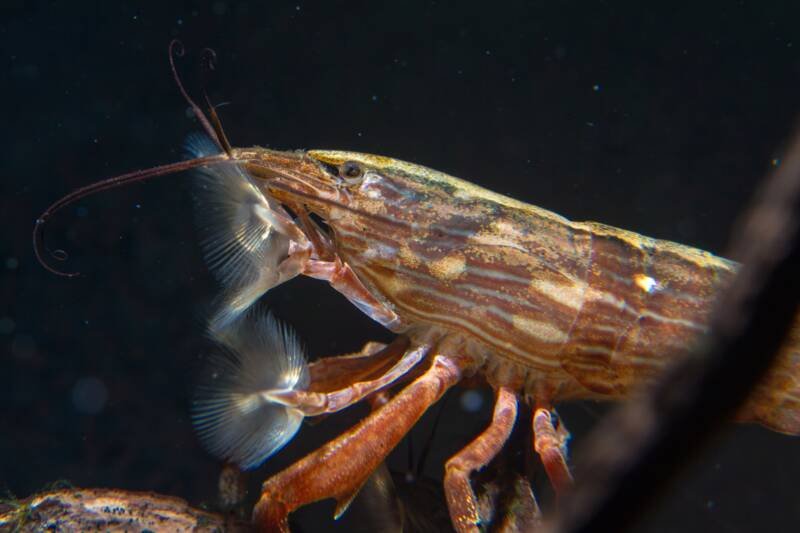 Their peaceful temperament and fascinating behaviors make them even more desirable.

Though they can be tricky to take care of due to their sensitive nature, they are well worth the effort.

Aquariums with bamboo shrimp are lively and fun to watch. They may be small, but bamboo shrimp will undoubtedly steal your attention.

The bamboo shrimp has only one scientific name, Atyopsis moluccensis, but has quite a few common names. These include the wood shrimp, flower shrimp, fan shrimp, Singapore shrimp, and even more besides these. 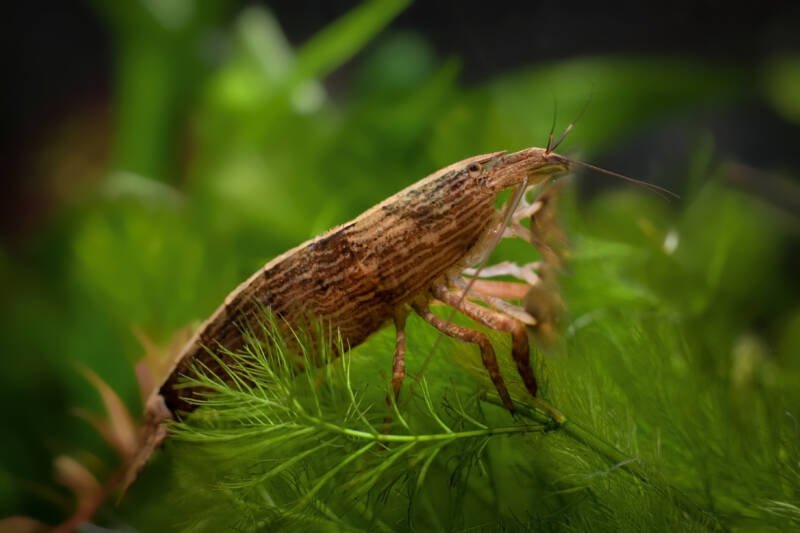 Bamboo shrimp are generally red with brown undertones and a pronounced white stripe running down their back.

However, they often change colors depending on their surroundings, mood, and health.

When comfortable, their red coloration emerges. But in some cases, they instead turn a vibrant cerulean blue.

Their most distinct characteristic is the “fans” attached to their hands. These are what they use to filter through the water to find food. 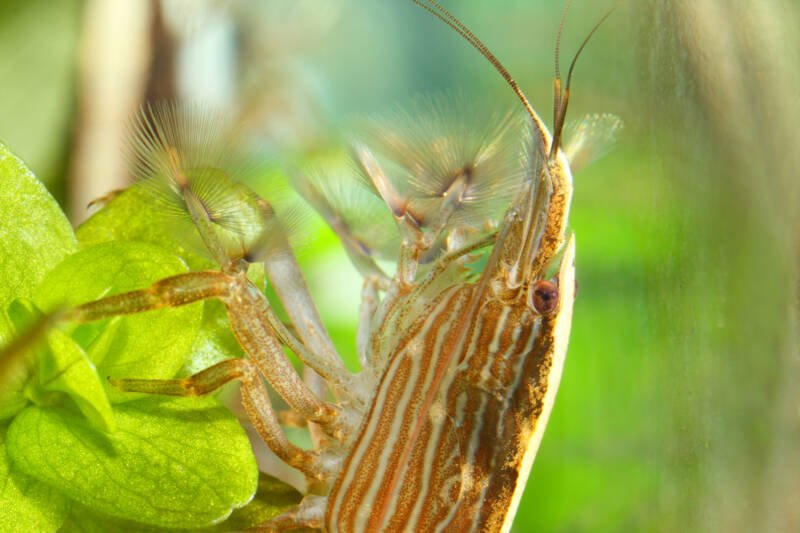 When they stop waving their hands and instead bring the fans quickly to their mouths, then you know they’ve just caught a meal! It can be mesmerizing to watch these beauties feed.

They grow up to three inches long, making them one of the largest freshwater aquarium shrimp available in the trade.

Unfortunately, the beauty of the bamboo shrimp is brief. These shrimp only live one or two years, and often have an even shorter lifespan of just a few months.

They may live longer if an aquarist keeps their tank in pristine condition, but this is rare.

It’s not uncommon for bamboo shrimp to die within the first week or even month after being introduced to a new tank.

Like many other shrimp varieties, the bamboo shrimp is very peaceful and not at all aggressive.

It is not territorial and gets along well with a variety of other species.

This includes other shrimp, fish, snails, and more. Bamboo shrimp often enjoy being around others of their kind.

They will often group during their daily activities, like feeding. While grouped, they show no signs of aggression or even irritation.

They are active shrimp and will generally move about the tank for the majority of the day.

Feeding is their main priority, so that’s what you’ll see them doing most often.

If a shrimp seems listless and doesn’t move much, this may actually be a sign of disease or illness.

Molting is another interesting behavior for shrimp owners to watch, although it will only happen roughly every other month.

The molting process will begin with a shrimp finding a hiding place. After one or two days of hiding, when the shrimp is sure it’s safe, it will molt and emerge from its old shell.

At this point, the shell can be removed or left for other tank inhabitants to eat.

Wood shrimp are native to Southeast Asia and could be found in Sri Lanka, some regions of Japan, India, on the Malay Peninsula (Singapore, Southern Thailand, Malaysia), and the Samoan Islands.

Their aquarium setup should mimic the warm and slow-flowing waters of their natural habitat.

The size of the tank for bamboo shrimp largely rests on their dietary needs. Because they’re filter feeders, they need tanks with large water volumes.

As a result, each bamboo shrimp needs a minimum of 20 gallons. 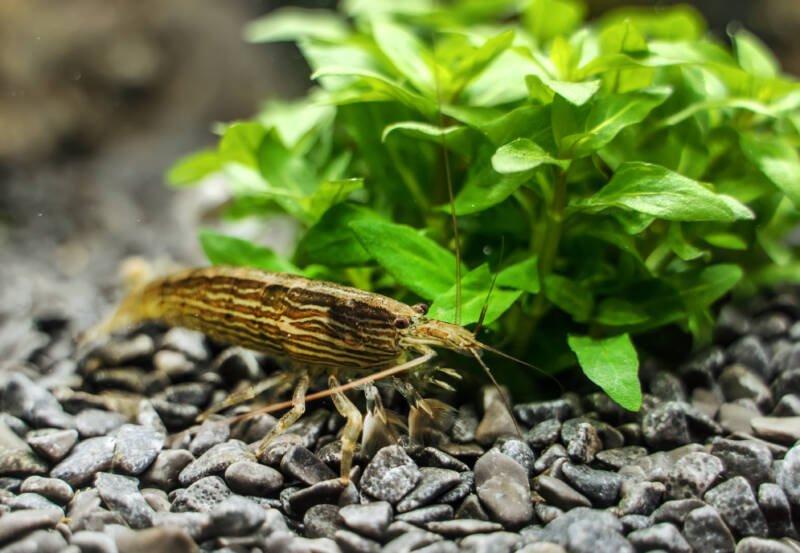 Due to their small size and delicate nature, shrimp can be easily damaged in the aquarium.

To avoid such accidents, some modifications and precautions may be necessary.

It can be more difficult to keep shrimp alive because of the many inadvertent dangers they face from aquarium equipment.

However, with the right tools and tank setup, your bamboo shrimp will be able to delight you for months to come.

These shrimp do better in aquariums that have already been cycled and which are well-established and stable.

Like other shrimp, they are more sensitive to water parameters and are usually the first affected by unbalanced or high chemicals.

Because of their sensitivity, chemical imbalances in the tank affect shrimp the most.

Aquarists should also be careful of medications and plant fertilizers, as those have chemicals in them that may also hurt shrimp. Copper specifically is fatal to shrimp.

Like most other shrimp, bamboo shrimp are peaceful and not aggressive. They don’t have any features that could cause harm like sharp teeth or claws.

However, this also means they don’t have any way to defend themselves. Because of this, bamboo shrimp should be housed with peaceful fish that won’t attack them.

They should also be housed with fish that won’t snack on them. This is a common problem in community tanks.

Fish that bamboo shrimp do well with include:

Bamboo shrimp are filter-feeders. This means that they eat thefine particles of food that float throughout the aquarium water.

Fish food, plant matter and debris, micro-algae, and other micro-organizations are present in established aquariums.

These are what bamboo shrimp feed on, and they can eat quite a bit despite their small size.

Water changes, moving plants around, cleaning the gravel, and replacing the filter will cause excessive water current and stir up the substrate. As a result, these are prime feeding times for bamboo shrimp.

You may see them gather around to eat during these periods.

It’s fascinating to watch them feast, but be careful not to hurt them while you continue working.

Because of their diet, bamboo shrimp are mostly self-sufficient and don’t require much supplemental feeding.

But if you’re worried, there are shrimp-specific foods available for purchase.

You can also alter other types of fish food. For example, you can grind algae wafers and add drops of aquarium water to turn it into a paste for your shrimp.

A healthy bamboo shrimp is an active bamboo shrimp. The one exception to this rule is when they’re preparing to molt. At this stage, they may hide for a few days as they go through this process.

However, there may be an underlying health concern if your shrimp remains listless and doesn’t molt after a few days.

Similarly, if your bamboo shrimp refuses to eat for more than two or three days, it may be time to seek help.

These shrimp are also easily susceptible to stress. Being transported from the store to the tank can be a hugely stressful event, and has led to many premature deaths.

Another common source of stress is fluctuating water parameters or unclean water.

Shrimp are especially sensitive, so aquarists must take care to keep the highest quality of water possible.

You should also keep an eye on their appetite after bringing them home from the store.

In store tanks, bamboo shrimp might not have received enough to eat. When you add them to your tank, make sure food is readily available.

And as mentioned earlier, chemicals often contained in plant fertilizers and medicines can be detrimental. Copper is fatal, but there are plenty of other chemicals that are also dangerous.

Because of this, live plants present both unique benefits and drawbacks.

They are necessary for shrimp to feed on, hide in, etc. However, they also often require fertilizer doses to stay alive.

Be especially careful with root tabs and other forms of substrate fertilizers designed to slow release over time. The chemicals in these can build up underneath the substrate and then be released suddenly if the substrate is disturbed.

Bamboo Shrimp in the Aquarium

Bamboo shrimp are fascinating for both experienced aquarists and new hobbyists.

Their mesmerizing filter-feeding provides endless entertainment, and their striking coloring only adds to the beautiful show.

They’re perfect for community aquariums and species-only tanks, making them a versatile option for all tank owners.

They may not be the centerpiece of an aquarium, but they certainly won’t be overlooked anytime soon!