The opaline gourami (Trichopodus trichopterus) is a beautifully colored, hardy variant of the blue gourami. 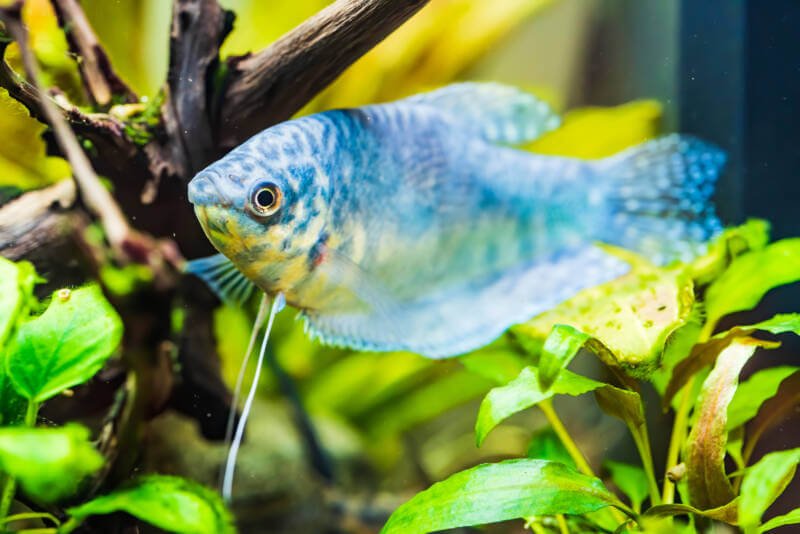 Also, known as the marbled gourami, the opaline is easy to care for and makes a lovely addition to a community tank.

Opalines are fascinating to watch and engage in several unique behaviors.

They move throughout the water column of the tank, coming to the surface frequently for air.

Opalines have unique personalities, with some being shy and others quite active.

They are also relatively easy to breed. Opalines are labyrinth fish and build bubble nests in which to lay eggs.

All in all, the opaline gourami is a fun fish and a great choice for someone new to aquarium keeping. Read on for more information on the care and breeding of this fish.

The Opaline gourami is a captive-bred variation of the three-spot gourami (or blue gourami).

The three-spot originated in southeastern Asia and Indonesia. They can also be found in the Philippines and Trinidad.

The opaline was selectively bred for its silver/blue color and marbled pattern.

In the wild, the three-spot gourami, naturally favors wetland areas, such as peat swamps, marshes, and canals.

They prefer slow-moving, darker waters with high levels of plant material and plenty of small food sources, such as crustaceans, zooplankton, and insect larvae.

The opaline gourami is a beautiful, graceful fish with a silvery-blue color.

Accenting the body is a darker, marbled pattern that extends into its delicate, flowing ventral fins.

The fins have touch-sensitive cells as part of the gourami’s sensory system.

Interestingly, the opaline gourami is a labyrinth fish. It has a respiratory adaptation called the labyrinth organ, which allows the fish to absorb oxygen from the air into its bloodstream.

As a result, it is important to remember that opaline gouramis need access to the water surface.

The body shape of the opaline is oval; elongated toward the head and tail and compressed top to bottom.

Because the opaline gourami is a developed, and not naturally occurring species, inbreeding is present in its genetic past.

It is therefore important to take care when selecting fish for your tank. Look for obvious deformities or unusual behavior.

When purchased, they are typically anywhere from an inch to two inches in size.

Their potential to triple in size should factor into your tank size selection.

They can breed when they reach a length of about three inches (7.6 cm).

With good care, you can plan on having this fish in your aquarium for four to six years or longer.

In general, opaline gouramis have delightful individual personalities, with some reacting visibly to their owners.

Because of their labyrinth organ, you may see your fish coming to the surface to get air.

Opalines can change color if they become stressed or if the tank’s water conditions are poor.

They are fast feeders and may out-eat the slower fish at feeding time. Make sure all fish in the tank are able to get food.

Individual fish have varying levels of tolerance regarding other tankmates.

Wild gouramis tend toward communal groups and coexist with other peaceful species.

In the aquarium, opaline gouramis tend to be peaceful when smaller but can become semi-aggressive as they mature.

Males can be territorial, especially when they are preparing to breed.

Excellent hunters, they can attack smaller fish in the aquarium.

Opalines use their sensitive pelvic fins to explore their environment and may become aggressive toward fish that tend to nip.

You should be prepared to adjust the mix should you observe any bullying within the tank.

Because of their nature and the fact that these fish can grow up to six inches in length, you will need a large tank to accommodate them.

One rule of thumb is to plan on a gallon of water for every inch of fish.

While juveniles can be kept in a smaller, 15 to 20-gallon tank, plan on a minimum tank size of 35-gallons for adults.

Select a tank that is long rather than tall to allow the fish easy access to the surface.

Plan for a few areas with dense aquatic plants to provide cover and shaded areas for any of your timid gouramis.

Set up the tank so that there is plenty of open swimming space for the more dominant personalities as well.

Any type of substrate will do, but with its silver/blue color, the opaline gourami will show up best against a dark substrate.

They will not typically eat your live plants, even though they are omnivorous. Trim any vegetation that may prevent the fish from reaching the surface.

As long as there are some shady areas, the gourami will tolerate moderate to normal lighting.

Keep the water temperature between 73 to 82 degrees Fahrenheit.

To maintain water quality, change out 25% of the water each week.

Keep the tank in a room where the surrounding air temperature is close to the temperature of the water. This will help prevent shock to the fish’s labyrinth organ when it comes up to breathe air.

Install an efficient filter with a mild current. Too strong current may stress your fish!

A properly-placed air stone can help to gently circulate and oxygenate the water.

The varying personality types of opaline gouramis may mean changing things up until you find the right community mix.

In general, these fish pair well with other non-aggressive fish of similar size.

Consider the following to pair with your opaline gourami:

Opaline gouramis will eat just about anything. They will accept various commercial fish food, including pellets, freeze dried, frozen, and flake foods.

To keep their diet balanced, include live foods such as brine shrimp and bloodworms.

Since they are omnivorous, you can even include fresh vegetables: spirulina algae, blanched romaine lettuce, or spinach are great choices.

Feed your opaline gouramis twice per day and only enough food that they can finish in a couple of minutes.

Opaline gouramis are relatively easy to breed. A few modifications to your tank setup and water will better your chances of a healthy set of fry.

Before breeding, condition the fish with live and frozen foods given in small amounts several times per day.

Prepare a separate breeding tank size of 10 to 20 gallons.

Water chemistry parameters can remain as usual. Keep the water temperature around 80 degrees Fahrenheit and maintain a low current.

Try a peat or sponge filter for adequate filtration with minimal water disturbance.

One interesting behavior of labyrinth fish is that the male will build a bubble nest in preparation for mating. 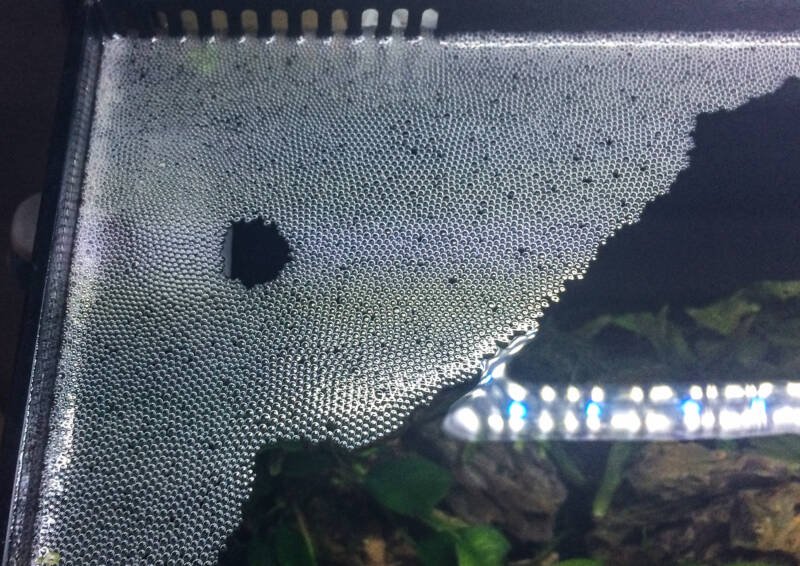 This nest will float and anchor to plants on the surface of the water.

The male will then swim back and forth, flaring his fins to attract the female opaline.

Once the female lays her eggs, the male will bring them to the nest and care for them until the fry hatch.

Remove the female after she lays the eggs to avoid the male becoming aggressive toward her.

After the fry hatch, remove the male from the tank and change the water frequently.

These water changes are especially important during the third week when the fishes’ labyrinth organ develops.

Feed the fry infusoria, liquid fry food, or nauplii. As they grow, you can transition to feeding them baby brine shrimp.

Opaline gouramis are extremely hardy fish, making them perfect for a beginner.

When purchasing new fish, avoid any with obvious deformities or unusual behaviors.

They are not prone to disease in a well-cared-for tank. However, they can contract common diseases due to poor water quality, low temperature, or inadequate diet.

Most of the time, bacteria naturally present in the tank will not affect your gourami.

If the fish become stressed due to poor water conditions or diet, they can be susceptible. Correct any tank condition issues and give your fish appropriate medication as needed.

In particular, the opaline gourami can contract the hole-in-head disease.

This infection can leave them vulnerable to secondary fungal and bacterial infections, resulting in the fish’s death. An antibiotic added to the water can provide treatment.

Another potential parasitic infection is ich, which presents as white spots on the fish’s body.

Your infected fish will rub against objects in the tank to attempt to rid themselves of the irritation.

Adding appropriate medication to the water will treat the infection.

With a poor diet, fish can become constipated, resulting in difficulties swimming. This is especially dangerous for labyrinth breathers, who need to reach the surface for air.

Keep constipated fish unfed for one day, then feed them some live food.

The opaline gourami is sturdy, long-lived, and a great choice for the newbie.

They thrive in a range of tank conditions and eat almost anything, making them very easy to care for.

With their interesting behaviors and unique adaptations, they are a joy to watch.

While they are excellent community fish when younger, opalines can become semi-aggressive as they age. Monitor tank behavior and address any resulting confrontations.

Adequate tank size with plenty of room to swim will give you happier, healthier fish.

They are readily available both in fish stores and online and at a cost less than $3 per fish, they are an inexpensive, beautiful addition to your tank.

How have you fared with adding opaline gouramis to your tank?