The rosy barb is a popular fish for beginners and advanced keepers alike. They make for a beautiful display, whether in a species-only or community tank.

These fish are readily available in commercial stores. They have become increasingly popular for their coloring, hardiness, and (usually) peaceful temperament. 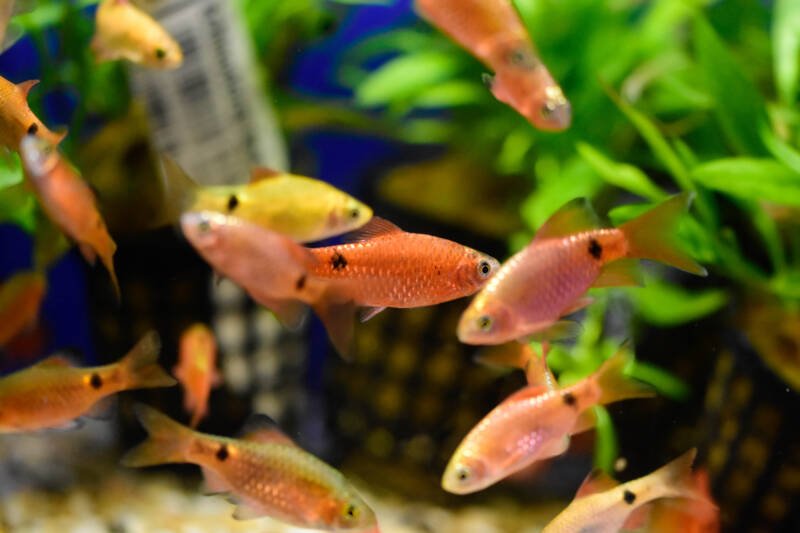 The rosy barbs also have fewer demands regarding their environment. This makes them a perfect fit for keepers who prefer a low-tech or more affordable setup.

The rosy barb’s appearance changes drastically depending on its gender.

Males are bright red or orange, while females appear more gold or silver. Both sexes have black markings on their fins and sides, although the extent of these markings varies by individual. They have a forked tail and only one dorsal fin.

This species is also cyprinid fish, which means it has the following characteristics:

The male coloring is what inspired its common names, the rosy barb and red barb. These names are both accurate and notably easier to roll off the tongue, as opposed to its scientific names, of which it also has several.

Compared to other barbs, rosy barbs are one of the larger species and can grow to 6 inches (15 cm).

However, they are relatively small compared to other cyprinids, the largest of which is the giant barb. The giant barb can grow up to a whopping 10 feet (3 m) long and weigh more than 600 Ibs (272 kg) in the wild.

They typically live five years or less, which makes them neither the shortest- nor the longest-living barb or schooling fish. Rather, these species are a solid intermediate option. 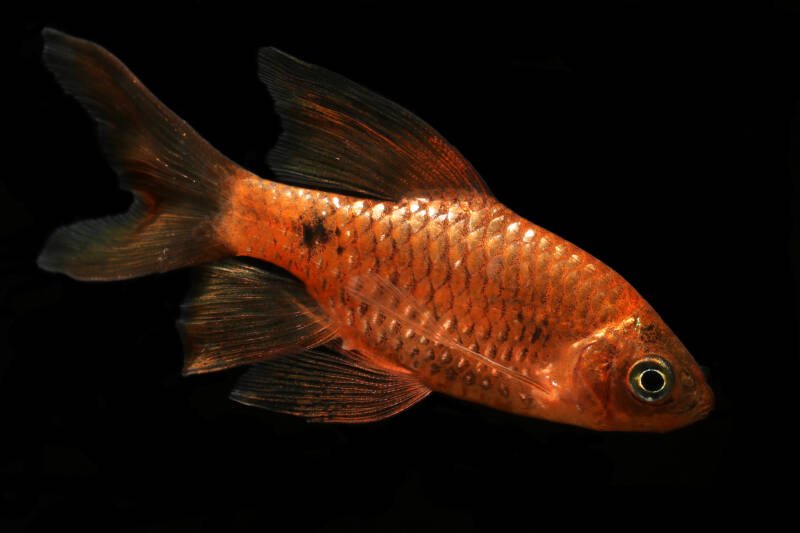 Like many schooling species, the rosy barb loves company. When it’s bereft of this and housed in small groups, it tends to become aggressive and engage in fin nipping.

As your school grows larger in the aquarium, this fish will become more active, confident, and happy. Its tendency to nip fins and chase other fish will be greatly reduced.

Aggressive interactions aside, the rosy barb will interact less with other fish when it has a considerable school to swim in.

Once it becomes comfortable and has a large school to lend confidence, rosy barbs will inhabit all levels of the aquarium. They are active swimmers and will often travel around the tank. However, aquariums must have a secure lid, as rosy barbs are active jumpers.

If the water is warm and fast, you can expect to find this tropical fish there. Rosy barbs are originally from Northern India.

There, you can spot schools with thousands of barbs inhabiting fast-flowing lakes and warm rivers. Native populations have also been spotted in Assam, Singapore, Australia, Mexico, Puerto Rico, and even Columbia.

Though they live in schools, they are often found in areas populated by a variety of other fish.

Aggressive tendencies can arise as a result of competition for territory or food, though on the whole rosy barbs are peaceful and do well in these environments. 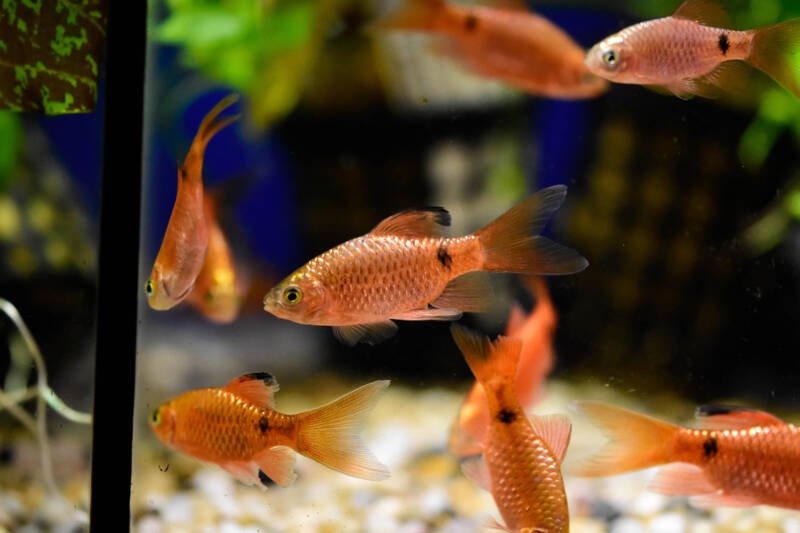 Because of its size and schooling classification, this fish needs a minimum of 30 gallons. Keep in mind, this is for a species-only small school.

If you want to keep a community tank or have a large school (remember: more barbs = happy barbs), you’ll need to significantly upsize your tank.

Like any fish, rosy barbs appreciate new driftwood, rocks and caves, and other décor to explore. But these elements are not as integral to their health as they are for other types of fish.

Long tanks rather than tall tanks are better for this fish since the school will have plenty of room to roam.

Rosy barbs also like aquatic plants, though silk or other types of fake plants will also work.

But if you have live plants, be warned: they like to nibble on soft-leaved plants and will make them part of their regular diet.

If you keep live plants, appropriate lighting and substrate are necessary to support their continued growth.

Rosy barbs are low-maintenance fish compared to many other species and only truly need a filter and heater to feel comfortable.

However, water movement, lighting, and substrate choices can all have a positive impact on the life and behavior of these fish.

The type of plants you keep in your aquarium may guide some of the equipment you buy, such as the lighting setup and type of substrate.

However, there are many choices available that will suit this species. This makes them a cost-effective fish in terms of initial purchase and tank setup.

Because of their easy care, rosy barbs can tolerate a wide range of water parameters.

They are also more tolerant of incorrect parameters, and won’t immediately suffer negative health effects if you miss a tank cleaning.

However, this does not mean that they shouldn’t be kept in water parameters that fit their preferences. Below are their preferred ranges for pH, dGH, and more.

For rosy barbs to show their full coloring, be active, and display natural behaviors, it’s important to try and match these water parameters.

Some deviation is fine, and even to be expected in an aquarium. However, tank owners should test their parameters regularly to make sure they don’t stray too far from the rosy barb’s preferred levels.

Because of its potential aggression, rosy barbs are best housed with fish that are peaceful, fast-moving, and short-finned.

When these criteria are met, and the rosy barbs have a large school to depend on, they socialize well and are a great addition to community tanks.

In the video below, you can clearly see how fast-swimming rosy barbs stress a less agile school of angelfish.

Rosy barbs also do better with fish that prefer similar water parameters. Freshwater fish that like current and warmer temperatures are advisable.

Some common tankmates include:

With regard to cichlids specifically, hobbyists have reported moderate to great success using rosy barbs as dither fish.

No matter what kind of fish you choose for a community tank, make sure they all thrive in the same water parameters and have similar temperaments.

For example, white cloud minnows would be incompatible with rosy barbs because of the minnow’s preferred temperature range. Goldfish would be an unwise companion since they are long-finned and slow-moving.

The rosy barb is an omnivore that will take advantage of any food you add to the aquarium.

They will accept a variety of foods, ranging from vegetables to live, meaty foods and, as noted earlier, plant matter. Some of their favorite foods include:

They’ll also gladly munch on more unusual foods that other fish would reject, such as:

When feeding rosy barbs vegetables, thaw and boil them first. If the vegetables are fresh, they should still be boiled.

Rosy barbs will accept food that is frozen, live, and freeze-dried. They’ll also accept flake foods and pellets, although these are generally less nutritious than the foods listed above.

Because of their voracious appetites, owners should be careful of overfeeding. Only give rosy barbs what they can eat within two minutes, and stop if you see their stomach bulging. A slight roundness is acceptable, but a “food baby bump” is a sign to stop.

Are Rosy Barbs Your Next Fish?

Though their size and need for a school necessitate a larger tank, these fish are still great for beginners. They are one of the hardiest types of barbs and have been known to tolerate cycling in new tanks and a missed cleaning in established tanks.

Overall, their easy temperament, beautiful coloring, and fun behaviors make them an excellent addition to species-only and community tanks.

Their schooling movements are truly a sight to behold, and their colors create an underwater light show.