The silver arowana (Osteoglossum bicirrhosum) represents one of the pinnacles of freshwater fish aquariums.

Members of the “band fishes,” these sleek predators add a touch of whimsy and awe to any tank. 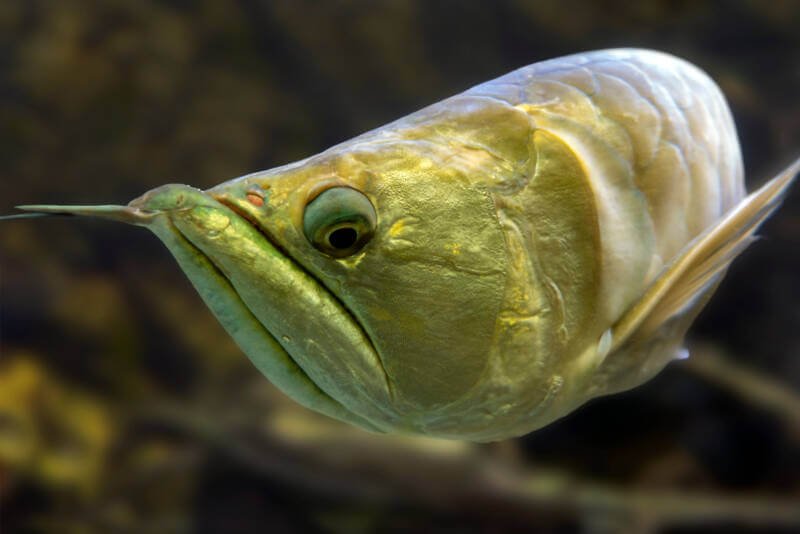 Combined, you get the unique look that prompts these fish to have additional dragon fish and monkey fish names.

If you have plenty of experience under your belt, the silver arowana represents the ultimate feather in an aquarist’s cap.

While NOT recommended for beginners, these stunning fish will enhance your aquarium for years to come.

Silver arowana inhabit the Amazon river basin in South America. That sleek, narrow profile adapts them to be strong swimmers.

They’re also capable of propelling themselves OUT of the water in powerful jumps, hunting prey foolish enough to inhabit low-lying branches.

They have underslung “drawbridge” mouths that allow them to scoop up prey.

Large, pearlescent scales flash through the water, drawing the attention of the fish, crustaceans, and even mammals they prefer to keep on the menu.

The pelvic and pectoral fins are thin and narrow. This sleek outline makes them streamlined swimmers.

You’ll probably only see yours reach 3 feet (0.9 m) in a home aquarium – not that that’s any less impressive! 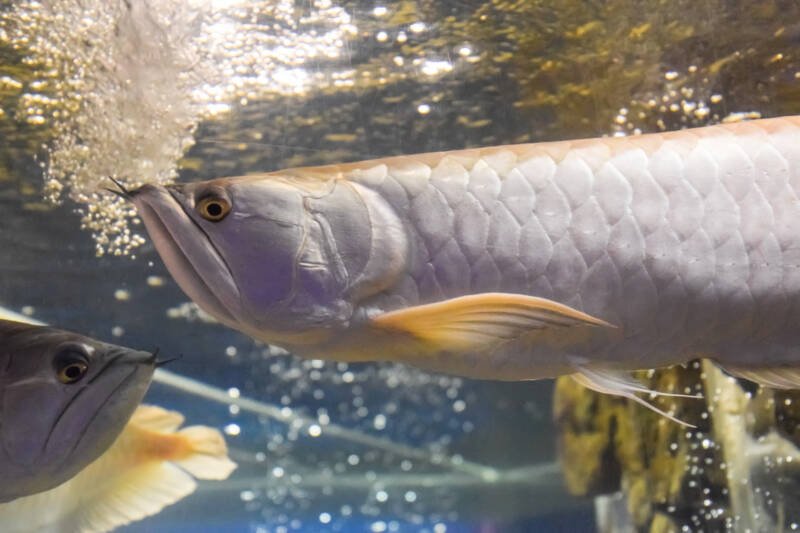 They still weigh a whopping 10 pounds (4.6 kg) by the time they finish growing.

These charming monkey fish start around 4 inches (10 cm) as juveniles, but they undergo a rapid growth phase. 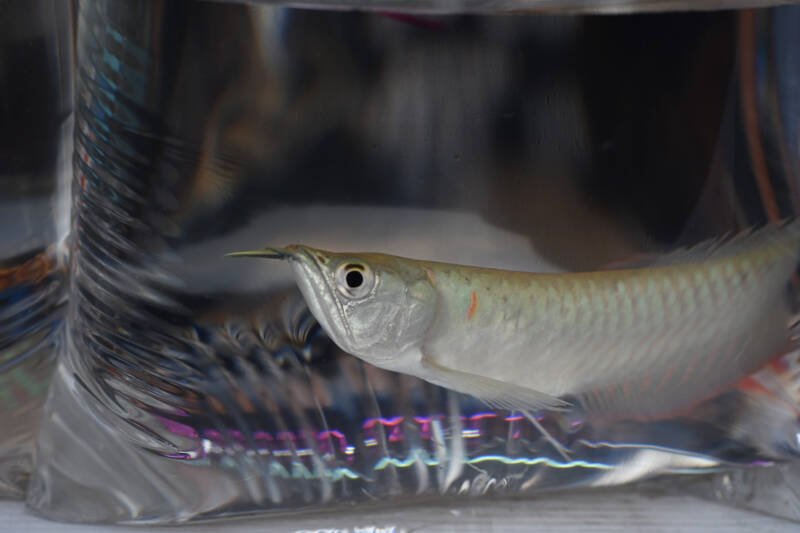 Your best bet is to pick one up when it’s around 8 inches (20 cm) – that’s the healthiest size to start with.

Considering monstrous their size, prepare for a long-term investment. Silver arowana survives for 10-15 years, even in captivity.

However, if you don’t provide the proper space, your dragon fish can suffer from developmental problems that can cut that number down.

Silver arowana go through a couple of phases throughout their growth process.

When young (and small), they tolerate staying in schools without a problem. While you may not see them shoal together, six fish works as a nice round number. 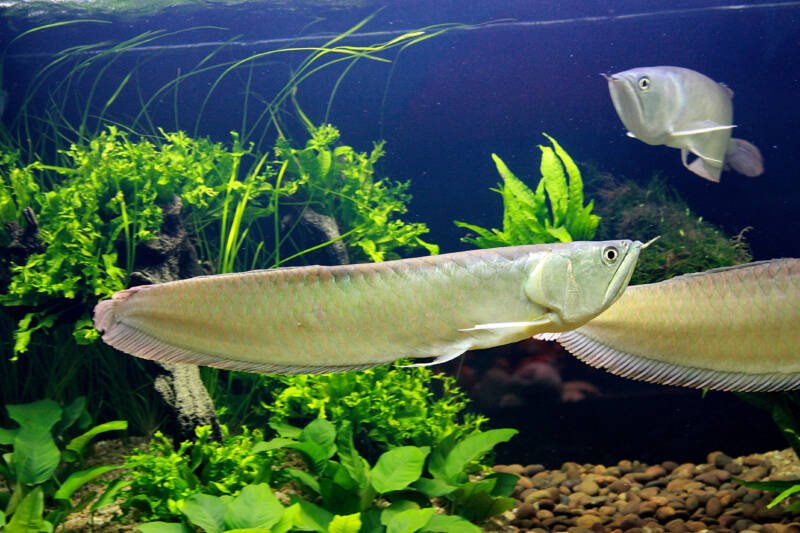 As they get older – and larger – the situation gets more complicated.

Arowana don’t typically get along as adults. There are exceptions to the rule if they’ve grown up together, but you MUST provide the proper space. That means room for SIX full-grown dragon fish.

You’re better off sticking to a single silver arowana as the focus of your tank.

You’ll still need an enormous tank, but at least you won’t need to give up an entire room or purchase an outdoor pond.

It’ll prevent those semi-aggressive habits from cropping up in the group, too.

As you might expect for such a giant fish, you can’t skimp on aquarium size. 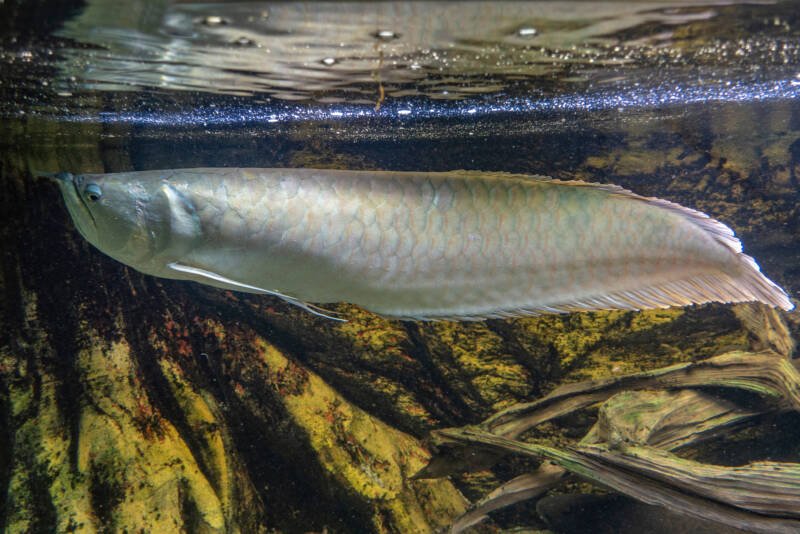 Try to go any smaller, and your dragon fish will end up with body deformations and a reduced lifespan.

Worse, you could face the real possibility of a leap for freedom. When feeling confined, silver arowana are known to jump. (And that’s A LOT of fish to go airborne!)

You want a sturdy lid, anyway, but you don’t want your arowana injured by smacking into the cover all the time.

Arowana DON’T tolerate poor water quality. You need to invest in the best quality filter for your tank – possibly more than one.

The nitrates should never get above 40 ppm. This means you’ll also need to perform weekly water changes of at least 25% to stay on top of things.

If you choose to maintain an outdoor exhibit, you need to take in weather concerns, as well. You will need a reliable heater for ponds.

Still, they come from tropical waters, and you should do your best to replicate those waters.

If you keep an outdoor pond, make sure the waters don’t chill too much during the colder months. 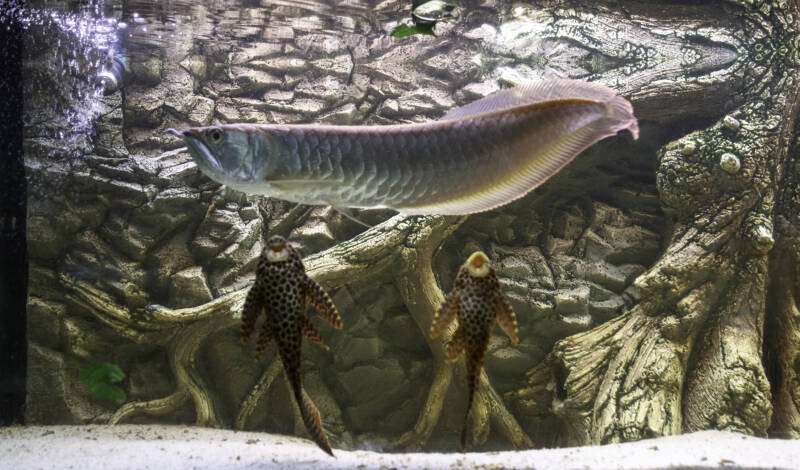 Similar to bala sharks, silver arowana have a pronounced startle reflex. Unfortunately, when arowana spook, it’s a lot of fish in motion.

You want to set up your tank in a room AWAY from foot traffic and sudden lights. (Again, no need to test that lid too often)

Swimming space is a higher priority for your monkey fish than décor. Any live plants you choose need to stay along the periphery.

You want to stick to greenery with strong, heavy roots like Giant Vallisneria or Amazon Swords.

Remember the behavioral differences between juvenile and adult arowana? Those differences extend to planning community tanks.

When small, these band fish find themselves harassed by larger tank mates. And then the tables turn as they grow, and their predatory nature emerges.

Silver arowana have a semi-aggressive personality. They’ll snack on fish that fit inside that drawbridge mouth of theirs.

You need to strike a careful balance between similar temperament and size – something that isn’t easy. 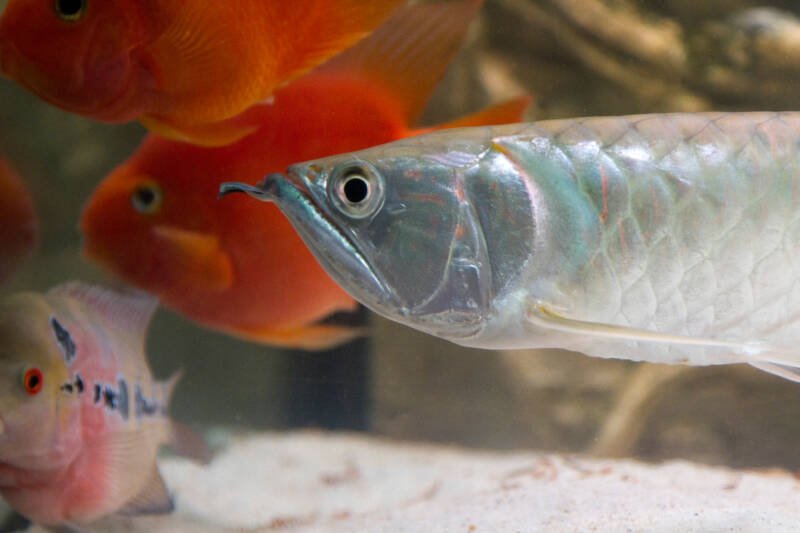 If your arowana goes into the tank FIRST, your odds of successfully building a community tank increase. They’ll settle into a territory and quiet down.

Then you can slowly add some of these compatible fish:

At the other end of the spectrum, you need to avoid smaller fish. Dragon fish snatch up anything that fits in their mouth.

That includes freshwater shrimp, snails, and other crustaceans. Your arowana isn’t displaying aggression – they’re just sampling from their usual diet.

Keep in mind that every arowana develops a different temperament and personality. So even though a species SHOULD be compatible, you may see problems with aggression.

Have a backup plan (and aquarium) in case your original community develops a breakdown.

One of the things that makes silver arowana so impressive in the wild is their predatory hunting behavior.

In the wild, they’re carnivores, tracking down reptiles, fish, mammals, and mollusks.

However, in captivity, they appreciate a touch of vegetation in their diet – just a touch.

You won’t teach your silver arowana to accept commercial pellets or flake foods. First, you’d need a massive amount to satisfy their appetites. Second, it doesn’t provide the balance of nutrients their bodies demand.

You need a meat-focused diet. Frozen or live works equally well, and the variety keeps your fish as healthy and shiny as possible.

Don’t hesitate to mix these options into a homemade preparation. You can choose from any of the following:

If you want to give yourself some entertainment, provide feeder fish. Your best bet is to breed your own, so you know they’re free of infection and parasites.

If you opt for the pet store, quarantine the feeders for a couple of weeks to monitor for signs of problems.

Breeding Silver Arowana: Got a Pond?

In general, most aquarists don’t breed silver arowana. Unless you have an outdoor pond (or aquarium) in excess of 500 gallons (1900 l), the odds aren’t in your favor.

That’s the ideal amount of space required for a successful breeding event.

It should come as no surprise, then, that most of the aquarium industry sources their arowana from commercial breeding.

Asian fish farms have the space and resources to breed these monster dragon fish consistently.

Males and females have slight differences. If you pay close attention, though, you can pick them out.

Females have a rounder body – designed to hold the developing eggs.

In the wild, silver arowana start spawning during the flood season. This occurs in the Amazon river basin between May-July.

A male and female will pair off, and the female builds a nest in the substrate to lay the eggs.

Once the eggs are laid and fertilized, the male gathers them into his mouth. Yup – dragon fish are mouthbrooders!

The eggs are quite large and reddish. The male carries them for 50 days until they hatch.

The fry continue to stay within the male’s mouth for another five weeks as they develop further. At that point, they venture out on their own.

They’re large enough to handle brine shrimp and even small feeder fish without a problem.

Tank size is the limiting factor in breeding silver arowana. Aquarists need to raise a pair together (and hope they have a male and female). That means an enormous tank or pond to begin with.

They also need to anticipate room for the resulting fry. It’s asking a lot for most people.

If you stay on top of your water quality, your silver arowana can avoid the most common freshwater fish ailments. These include:

Unfortunately, the most significant health concerns for dragon fish result from improper tank size and setup.

Arowana that rub their barbels against sharp décor or gravel can damage the sensitive organs. Check your tank carefully before adding any arowana.

If your arowana’s eyes continuously point to the BOTTOM of the tank, it’s known as drop-eye. This results when your fish stay in tanks that are too small.

You can aid in treatment by blocking the sides of the tank, so your fish needs to turn its gaze upward to search for meals.

Silver Arowana: Are They for You?

While not for the faint of heart or beginning aquarists, silver arowana rank as one of the most prized freshwater fish.

As juveniles (when small and manageable), you’ll spend around $50 per fish. Considering how large your new acquisition will get, that’s not terrible.

Of course, you need to factor in the proper aquarium size and all of the appropriate accessories.

Such additional costs can quickly run to the expensive side in no time. If you choose to maintain an outdoor exhibit, you need to take in weather concerns, as well.

You may also face the possibility of incompatible tank mates. The fish that worked, in the beginning, may not work well as your dragon fish ages.

You’ll need to have a plan in mind for your other fish – or have an additional tank on-hand (just in case). 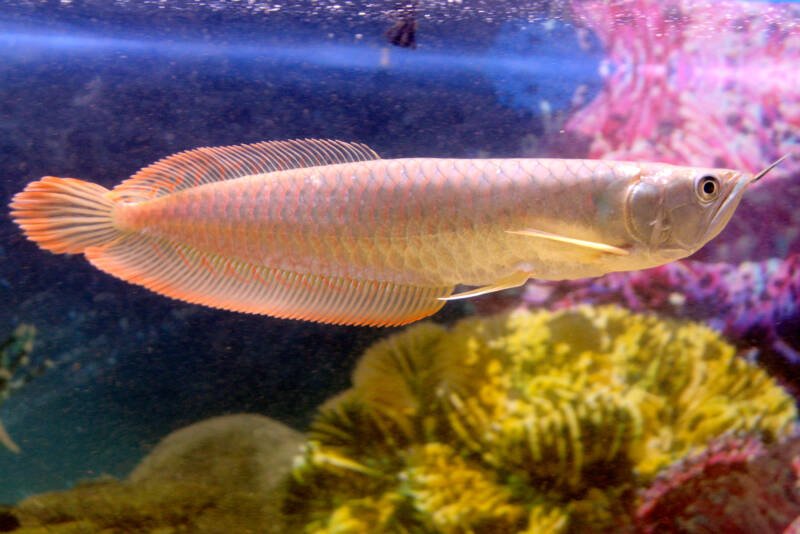 The silver arowana is a magnificent fish. Aquarists aspire to keep one in their homes at some point in their career.

The stunning appearance and sleek swimming style make for a beautiful home aquarium. So long as you have PLENTY of room.

Do you have a silver arowana? Has it ever tried to jump from your tank?

What’s the maximum length your dragon fish has reached?