Of all the tetra fish, the Mexican tetra (Astyanax mexicanus) is perhaps one of the most unique and often studied species. 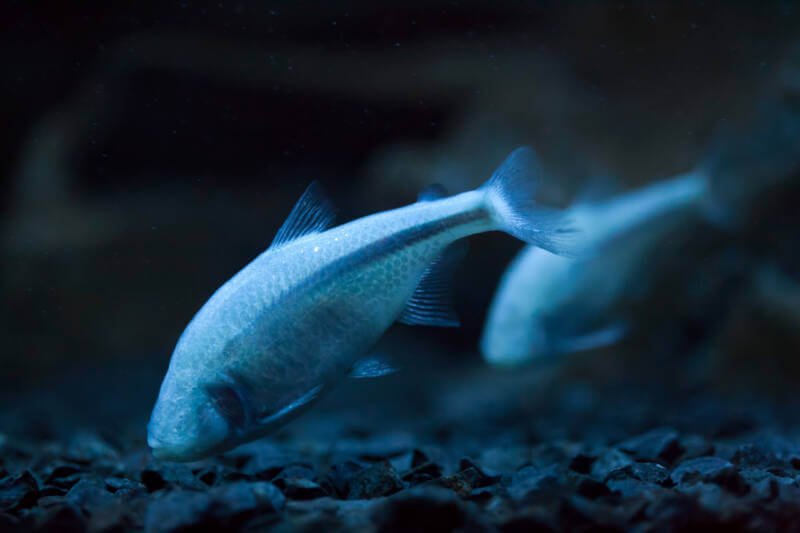 This species is in the characid family, which includes the famous South American piranha, and is the United States’ only native characid species.

What is even more amazing is that the Mexican tetra exists in two morphs: a surface-dwelling form and a blind cave form.

These forms evolved in close proximity to each other in rivers and underground caves of the southern United States and eastern Mexico.

From a scientific standpoint, because these two morphs of the same species exhibit a wide range of traits and behaviors, this fish makes for a fascinating study in evolution and natural selection.

From an aquarium-keeping standpoint, the more popular of the two by far is the blind cave form. Also known as the Mexican blind cavefish or the blind cave tetra, this hardy fish is valued for its peaceful nature and unique look. 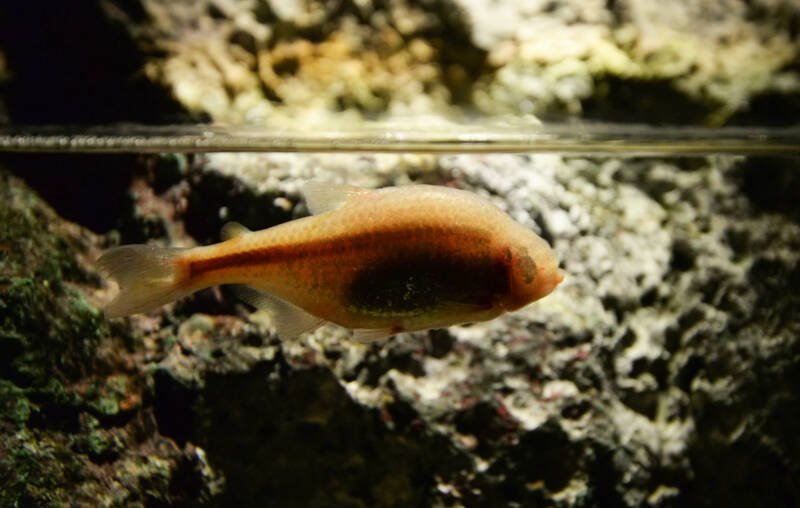 Accidental introductions have resulted in non-native populations in several other locations in the United States, including Arizona, Oklahoma, Louisiana, and as far away as the upper Scioto River in Ohio.

In southern New Mexico, the wild populations are in severe decline and may even be extirpated. As such, they are classified as endangered within the state of New Mexico.

This species does not tolerate cold well, and its distribution is limited by northern decreases in temperature. In the wild, these fish migrate to warmer waters in the winter months.

The sighted, surface-dwelling form has a wide range throughout the southern United States and Mexico, living in rivers, tributaries, and reservoirs where sunlight easily reaches.

The sightless form is found only in underground caverns and caves.

In many places, the surface-dwelling form can be found in waters directly outside of caves where their sightless morphs live.

The surface-dwelling form of this fish lives in large schools of several hundred fish. They prefer rocky or sandy substrate, swift-moving waters with significant outflow, and consistent temperatures.

The blind cave form, in contrast, is mostly solitary and lives in the calmer, completely dark underground waters.

As a result of accidental “bait-bucket” releases and subsequent introductions, the surface-dwelling form is considered an opportunistic and invasive species in some areas. It readily displaces native species to consume insects and other foods.

The surface-dwelling form has silvery coloring and a horizontal black band extending the length of its body. This band is more prominent toward the tail.

The blind cave form has mostly lost the pigmentation in its coloring and has a white-ish, albino body color.

In addition, the cave form has minimally developed or receded eyes and is sightless.

How do these fish find their food?

The blind cave form uses highly developed lateral lines along its body to detect movement in the water combined with a sensitive nasal cavity to “smell” food.

An increased olfactory bulb size results in an increase in their olfactory senses.

How does the cavefish manage without eyes?

Over time, these fish have evolved certain constructive traits that allow them to find food and mates as well as to avoid predators.

Their ability to feed is aided by the development of large jaws, additional teeth, and an increased number of tastebuds located around their mouth and bottom of their head.

They have an incredible memory and can map out their habitat and navigate using feedback from their lateral lines. 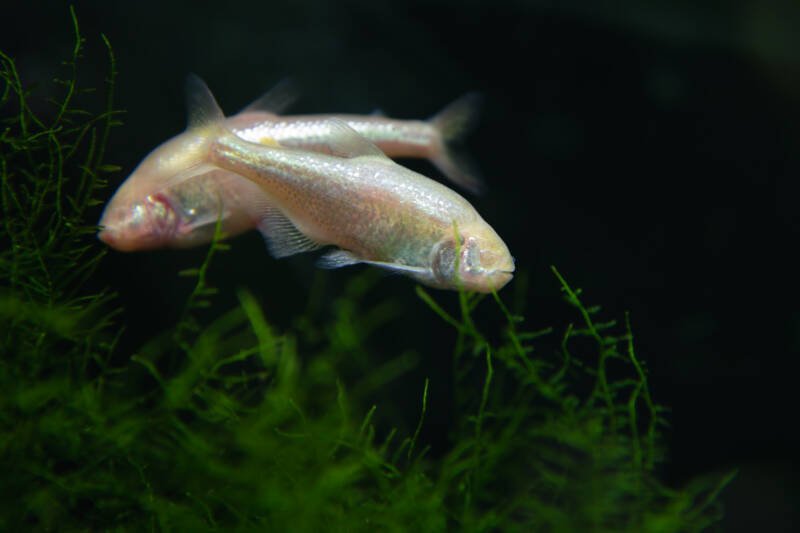 How long do blind cave tetras live? In the wild, these fish have a maximum lifespan of about two years.

In captivity, they may live from three to five years with proper care.

The two forms of the Mexican tetra differ not only in their looks but also in their behavior patterns.

In the wild, the surface-dwelling form is an aggressive predator. In areas where it is invasive, there is concern that it may impact local populations because it targets native species’ young.

This form is very social, preferring to school in large groups with hierarchies and reacting collectively to predators.

The blind cave form, however, has lost the tendency to rely on a group, both for socialization and protection from predators.

Its regressive traits result in it preferring to swim mostly alone but with enough reactivity to others of its kind for breeding purposes. This form has a more peaceful disposition than its surface-dwelling twin.

You may find they are a bit shy when first introduced, but after some time, they will memorize their space and get around with no difficulties. They prefer to swim in the middle region of the tank.

Despite not being able to see, the blind cave tetra is a peaceful fish that can readily be paired with other similarly tempered fish in a community tank.

No. They are a peaceful species and do well in community tank. They may nip at others during feeding time, but these behaviors are more of the fish searching for food rather than true aggression. 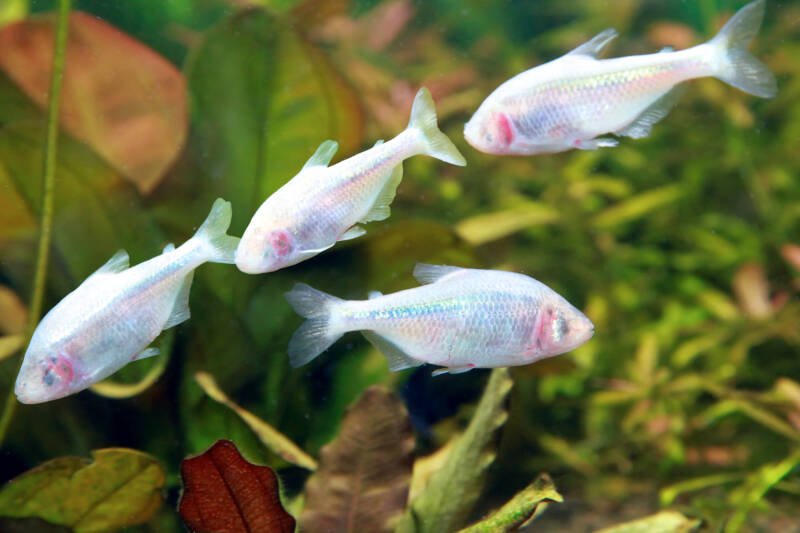 While this fish is mainly solitary, they do prefer to be kept with others of their own kind. We recommend keeping your Mexican tetras in a group of three or more.

With an adult length of three to four inches, this means a minimum tank size of 20 gallons to allow a group of five enough space to swim and grow.

Although 20 gallons is the minimum recommended size, if you can go with a larger tank, that is preferable, especially if you plan to add other species. The blind cave tetra has very few tank setup requirements.

Line the bottom of your tank with a dark sand or gravel substrate.

Consider adding a cave in which your fish can shelter, especially when they are first introduced to the tank. This will go a long way toward keeping them comfortable until they are familiar with their surroundings.

The blind cave form of the Mexican tetra will not harm your live plants, so feel free to add any that can tolerate the water conditions.

These fish like consistently warm waters in the temperature range of 68 to 77 degrees Fahrenheit (20 to 25 degrees C).

Use a tank heater and thermometer to ensure the water temperature is always within the recommended range. Because these fish like a high turnover rate to the water, install a filter with a flow rate of four to five times the volume of your tank.

The blind cave tetra can readily be paired with other similarly sized and tempered tank mates.

Consider the following to pair with your Mexican tetra:

The Mexican tetra’s diet varies from location to location in the wild.

In some places, it is primarily a carnivore, with their food of choice being smaller fish. In others, it is more of an omnivore, incorporating plants, algae, and insects into its diet.

In captivity, these fish are omnivorous and will eat commercial flake food. Supplement their diet with small live or frozen foods, insect larvae, or algae wafers.

Remember that the blind cave tetra may be slower than its tankmates when it comes to rushing the food at feeding time. Adding in some sinking foods can help ensure they are getting enough to eat.

Breeding in the wild occurs in the late spring through summer, but in the warmer parts of this species’ habitat, it occurs year-round.

These fish can breed when they are about six months old and lay numerous adhesive eggs.

Setting up a Breeding Tank

Set up a separate breeding tank with similar water conditions to your community tank and add a mesh lining. This will allow the eggs to pass through and prevent the adults from eating them.

Install a sponge filter, which has the filtration power needed to keep the water clean and adequately turned over but will not suck in any newly born fry.

In addition, it may be helpful to have additional small tanks in which to condition your males and females prior to breeding. This allows you to better control when spawning takes place.

Once the fish are conditioned, place them in the spawning tank in the evening. Check in the morning for the presence of eggs, which can number in the hundreds.

Remove the parents from the spawning tank.

The eggs should hatch within 24 hours. The fry will not need any care for the first five to seven days as they will feed off their egg sacs during this time.

Once the fry become free swimming, feed them infusoria for about a week. They should then be large enough to switch to artemia or nauplii.

Keep the fry in the spawning tank until they are large enough to introduce to the community tank.

The Mexican tetra is a very hardy fish. It is not prone to any unique diseases other than those typically seen with freshwater fish.

Keep on the lookout for ich, which may be difficult to spot on the blind cave tetra. This ailment can be quickly treated by correcting water parameters, separating the infected fish, and giving medication in the water.

How fascinating would it be to keep a tank populated with blind cave tetras?

Watching them navigate their territory and find food without the benefit of eyesight is an incredible sight.

Add to that their peaceful nature, hardiness, and ease of care, and you have an excellent addition to the tank of both new and experienced aquarium keepers.

Do you keep your Mexican tetras in a species-only or community tank?

We would love to hear from you!