When it comes to large polyp stony (LPS) corals, aquarists find themselves spoiled for choice.

One of the most striking in terms of appearance and available colors is the hammer or anchor coral (Euphyllia ancora). And it doesn’t hurt that they’re one of the easiest to manage. 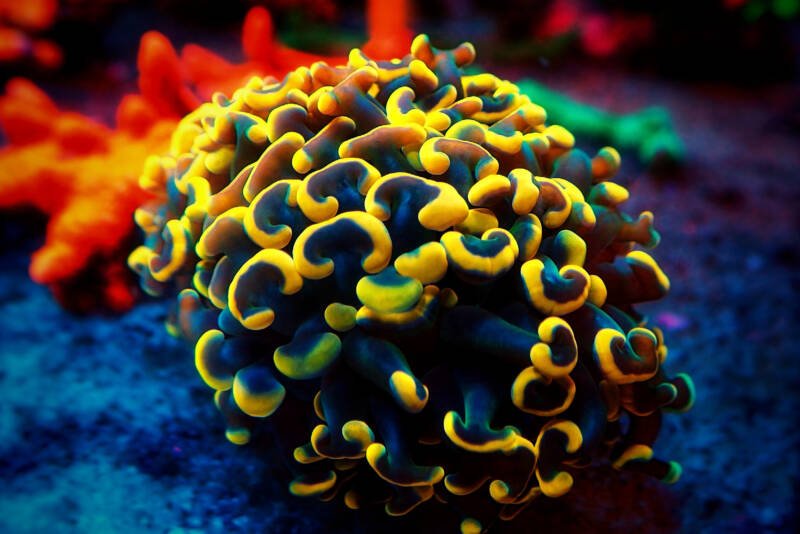 And – when provided with the proper care – they grow to fill your tank. You can populate an aquarium with their bold colors in no time.

That doesn’t mean you don’t need to consider a FEW concerns.

Hammers – like most Euphyllia species of coral – bring an aggressive streak into reef tanks.

If you’re not careful with their placement, you could end up with a coral massacre. Hammers are NOT ideal for the amateur aquarist.

Whether you know them as hammer or anchor corals, the name comes from the same source: the shape of their polyps.

The ends of those extended polyps take on three different forms, putting people in the minds of the standard shapes:

That third, rounded shape often gets hammers confused for frogspawn or torch corals.

If you look at the width and length of the tentacles, though, you’ll find hammers come in shorter and squatter than torches.

As for frogspawns? They have more of a spherical silhouette.

As with other Euphyllia corals, hammers come in branching and wall varieties.

The branches produce a single cluster of polyps (think of a head of broccoli).

In contrast, walls have a LONG growth that stretches out against the surface.

With individual calcium carbonate bases, you can save the colony if a problem occurs. You’ll probably lose the entire colony when you have a wall coral due to the single base.

Hammer corals produce plenty of colors, from green and blue to orange, pink, and purple.

Most have darker tentacles with lighter polyps on the ends, but some species retain a single color throughout. And the more unique the color? The more difficult it gets to track down.

Hammer corals inhabit the western portion of the Indo-Pacific.

Unfortunately, the original range of the species has decreased.

The demand for collection for the aquarium trade has resulted in overharvesting. And the IUCN Red List now has hammer corals listed as vulnerable.

They stay within portions of the reef with a moderate current, allowing their polyps to wave in the water flow.

And it’s not uncommon to see them growing to a width of 36 inches (91 cm) along their chosen spots. (You probably won’t see this size in your tank)

Though they ARE aggressive, you often spot hammer corals in the company of other Euphyllia species except for torch corals.

The genus coexists together without any problems, immune to the sting of nematocysts in their stinging cells.

Hammer corals work as adaptable species. If you’re starting with a reef tank and looking for an LPS coral to work with, they’re an ideal choice.

You’re better off starting with a branching variety versus a wall type, though. And you’ll still need to pay attention to some key points.

Hammer corals don’t grow all that fast (depending on the variety).

And while they’re reliant on the resources you provide to determine their growth, you need to offer room for them to stretch out.

You shouldn’t keep hammers in anything smaller than 50 gallons (189 l).

They’re also hardy enough to allow you to get away with a slightly higher nitrate level.

Some aquarists elect to dose their hammer corals. The decision falls to you.

If your calcium (350-450 ppm) and magnesium (1200-1350 ppm) levels remain steady, despite the continued growth of the coral, it isn’t necessary. But if you have a thriving population? You may need it.

Hammer corals look their best under low lighting. The subdued lights encourage them to extend their polyps further.

You may see better colors when you dim things. (For instance, using a moon light to get a “neon” glow) However, that’s not in the best interest of the coral.

You want a moderate light level (50-150 PAR). This will allow the coral’s zooxanthellae to undergo photosynthesis at a healthy rate.

If you go any higher, you could see bleaching of the coral as they expel the zooxanthellae and die.

As with the lighting, you want to set your hammer coral within a moderate water flow.

As these LPS corals extend their polyps, they need enough of a current to support the tentacles.

Finding an appropriate balance with your powerheads or wavemaker is key.

If you dial the current too high, the polyps can suffer tears or other damage.

To preserve its health, the coral will retract its polyps. This leads to the eventual death of your hammer coral.

Start low and watch for that swaying motion. You can always increase things.

As long as you have a spot with moderate lighting and water flow, hammer corals aren’t picky about where they settle within your tank.

They even tolerate placement on sand – provided they don’t get particles stuck to their polyps.

You WILL need to provide space around the colony, though. Hammer corals have sweeper tentacles that stretch 6 inches (15 cm), and they’re aggressive.

Unless you set them near other Euphyllia corals, they’ll sting whatever they come in contact with.

Torch corals are the exception to the rule. Torches are even MORE aggressive, and they’ll outcompete a hammer coral for room in the tank.

But, otherwise, you can comfortably settle any other species in the genus together and not worry about problems.

Hammer corals make a dynamic addition to reef tanks. Those bright, extended polyps look perfect as a backdrop in an aquarium.

And as long as you’ve provided plenty of room, they’ll happily coexist with other corals – even short polyp stony (SPS) corals.

Plenty of reef-safe fish enjoy sharing a tank with hammers.

As long as the fish leave those fleshy polyps alone, you may find they work as an alternative for sea anemones.

These tank mates know how to mind their manners:

On the flip side, some fish and invertebrates find the polyps too hard to resist.

They start to pluck at the ends of the tentacles, resulting in damage that leads to infection (such as brown jelly disease).

So you want to avoid these groups:

Hammer corals rely on their symbiotic zooxanthellae to provide the majority of their nutrition.

The algae undergo photosynthesis during the daylight hours when the polyps extend. This is why getting your lighting correct is so crucial.

Unlike other LPS corals, hammer corals aren’t as eager for supplemental feeding.

You only need to consider offering a meaty morsel 2-3 times a week. And you’ll want to allow plenty of time between offerings to prevent excess fouling of the water.

You can target-feed hammer corals. This prevents the food from getting stolen by the other fish in the tank.

If you’re not up to the task, allowing an extra bit of food to drop works, too (the coral will find it).

For target-feeding, you need a particular piece of equipment:

Hammer corals may only accept supplemental feeding once a week. This is okay.

Again, they’re not as hungry as other species. As long as you offer quality proteins, you’re on the right track with your feedings:

Hammer coral colonies contain the organs to produce both male and female gametes.

When hammers bud, they detach a small group of polyps from the main colony. A portion of the skeleton goes with them. Or they remove an entire tentacle.

The “bud” drifts away from the colony, settles, and then begins to grow a new colony in a different part of the tank.

Propagation and Fragging of Hammer Coral

Fragging hammer corals is relatively easy – depending on the variety you have.

To frag a branching hammer coral, you want to look for a healthy part of the colony. You can then cut, saw, or snap off one of the branches.

Dip it in an iodine solution and glue it to a frag plug or piece of rock. Keep the frag at the bottom of the tank until it’s ready for placement.

For a wall hammer coral, you’ll want a Dremel tool. Wait for the polyps to retract (so you can see) and then Dremel through the base.

If you need, you can then reshape the base before you glue the frag to a piece of rock. (Don’t forget that iodine dip!)

Hammer corals grow depending on their variety. Branches are the fastest, putting out new polyps within a few months.

Wall hammers, on the other hand, can take years to cover their space within the tank.

However, that growth rate depends on how well you care for them.

Hammer corals have a reputation for survival. Their aggressive nature pits them against most other corals.

And they even survive in less than pristine water conditions. But there are a few health concerns you need to stay alert for.

The worms make themselves at home in the base, devouring the coral.

In no time, you can find yourself with an infestation of flatworms, snacking on your hammer corals (and polluting your tank with waste).

The worms are large enough to spot with the naked eye, though. This means you’ll see them or the egg masses they lay.

You can eradicate them with a coral dip or add wrasses to your tank for pest control.

Brown jelly infections pose a hazard to hammer corals (or any Euphyllia species).

Whenever polyps suffer damage, they begin to ooze a brown, gelatinous substance from the wound. And without treatment, the resulting infection can spread to the entire colony.

Aiptasia sea anemones present as a plague for ANY saltwater aquarium.

These common pests are resistant to the sting of a hammer coral’s sweeper tentacle. And in no time, they’ll swarm over the colony.

Any time you see your hammer corals expelling mucus, turning colors, or dumping their zooxanthellae, it’s a sign of a problem.

And once their zooxanthellae are gone, it’s too late. You can’t reverse that damage.

You need to stay alert to changes or issues BEFORE that happens.

Hammer Coral: Are They For You?

Hammer corals top the list when it comes to LPS species in the aquarium trade.

And if you’re after unique colors? The prices go up from there.

Before you break out your wallet, make sure you examine the hammer coral thoroughly.

You should see the polyps at FULL extension. The colors need to look bright, with no pale or white polyps.

And if you notice any stringy mucus or “spewed” internal organs? Walk away.

Hammer corals make up the primary features of most aquatic images.

Between their rainbow of colors and the shapes of their polyps, they create stunning imagery – in the wild and your reef tank.

And as long as you observe their care needs, they’ll bring plenty of joy for years to come.

Do you have hammer corals? What shape are the polyps?

What fragging technique do you prefer to use?