Thanks to the success of the Pixar movie Finding Nemo, the fish known as Dory is now one that most of us can easily identify.

The 2016 release of the sequel Finding Dory led to another surge in fame. 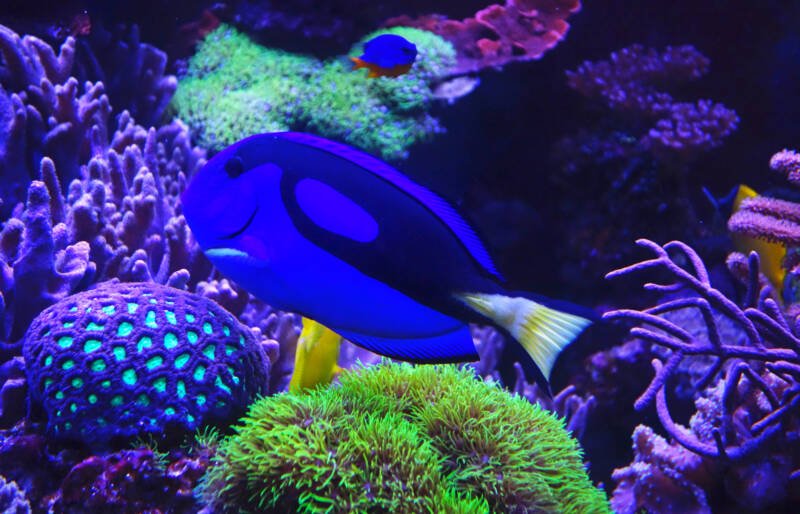 Popularity is great, but when it comes to keeping Dory in a home aquarium, there are a few things you should know about this iconic reef species.

What Kind of Fish is Dory?

Dory is a regal blue tang (Paracanthurus hepatus) and belongs to the Acanthuridae family of surgeonfish, of which there are more than 80 distinct species.

You will hear many common names for this fish, including palette surgeonfish, hippo tang, and royal blue tang.

A black line in the shape of an artist’s palate (or the number six) adorns their dorsal side. Their dorsal and ventral fins are diminutive, colored blue, and tipped with black.

Where Does Dory Live? 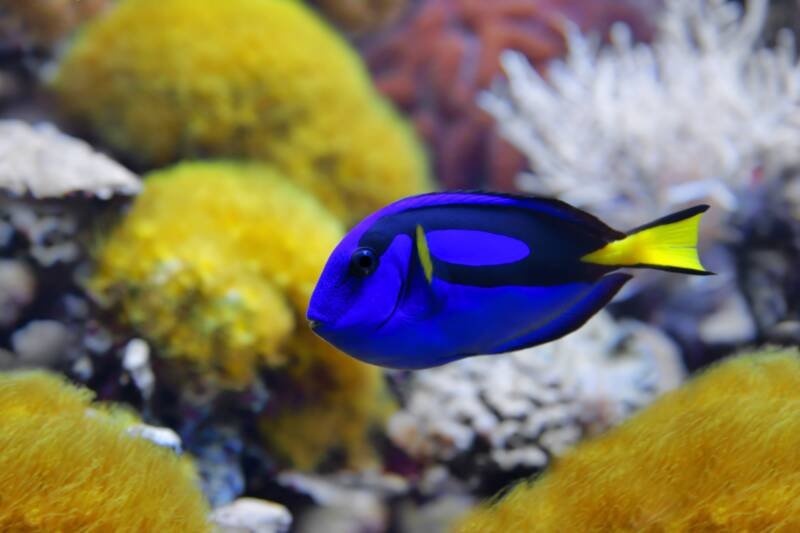 Tang fish favor coral reefs and rocky areas close to shore, where the waters are from six to 130 feet (two to 40 meters) in depth. The clear, warm waters of their natural habitat are rich with life.

This species is widely dispersed in the Indo-Pacific region but is not concentrated in any one area.

They inhabit reefs located anywhere from Australia to India, Thailand, and Japan. You can also find them around Guam, American Samoa, and the eastern coast of South Africa.

What Does Dory Eat?

These fish are primarily herbivores. When young, they eat mostly plankton, but as they grow, algae provide the bulk of their nutrients.

Blue tangs serve a valuable role in reef ecosystems, devouring algae and keeping it under control, which allows space for the polyps to grow.

Without blue tangs, the overgrowth of algae could suffocate and destroy the reef system. Completely reef safe, these fish nibble on algae around the corals without damaging the delicate polyps.

In an aquarium, blue tangs will eat nori (marine algae). In between meals, they graze on live rock and similar tank surfaces.

They need a supplemental protein source as well, such as brine shrimp or mysis shrimp.

You might think you know all there is to know about the lovable Dory, but here are a few facts that might surprise you. 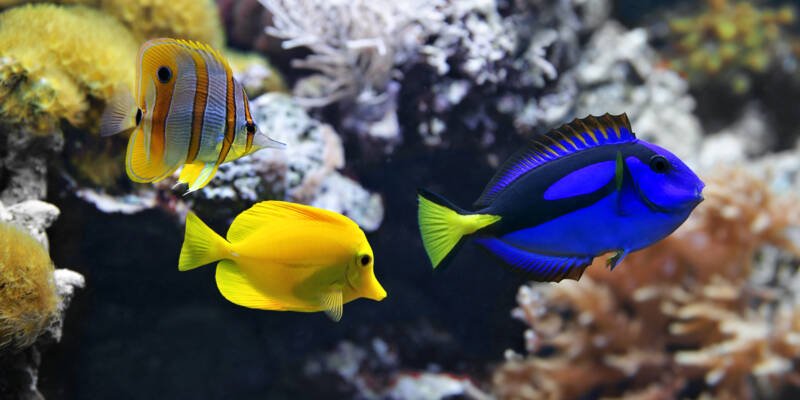 Surgeonfish are known for the razor-sharp spines along the base of their tail. They extend these highly venomous spines both for defense against a threat and to thwart territorial rivals.

The ciguatera poison contained in these spines will stun and irritate other aquatic species.

This poison can affect humans as well, with symptoms such as headache, diarrhea, and vomiting. In severe cases, it can affect breathing and heart rate.

Blue Tangs Are Not Always Blue

When they are juveniles, blue tangs are bright yellow! As adults, special cells called iridophores reflect the light and lend the fish its blue color.

In low light situations, these fish can appear white with purple accents.

When stressed, their color can deepen to purple, and their black lines will blanch. 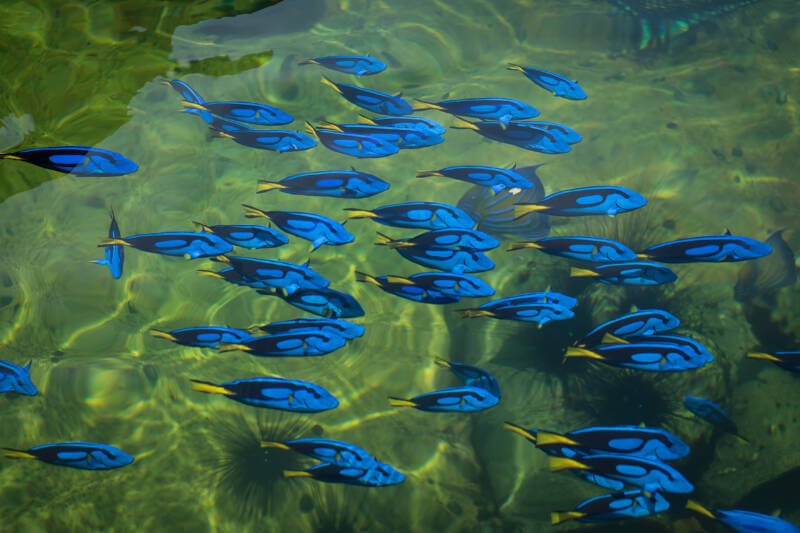 You will recall that Dory was often a solitary fish prior to meeting Marlin. However, she had a friendly personality and was always willing to talk to others.

In the wild, blue tangs are shoaling fish that enjoy the nearby company of others of their kind.

Blue Tangs Do Not Have Short-Term Memory Loss

While the character Dory suffered from short-term memory loss, that is not the case for all blue tangs.

There are multiple published studies that show fish retain memory for extended periods. Results indicate that fish can remember tasks, directions, and locations anywhere from two weeks to several months to as long as a year or more.

Dory’s short-term memory loss in the Pixar movies served to show how disabilities do not limit one’s potential or value.

Keeping Dory in a Home Aquarium

These fish need an experienced caregiver. Consider the following before purchasing a blue tang. 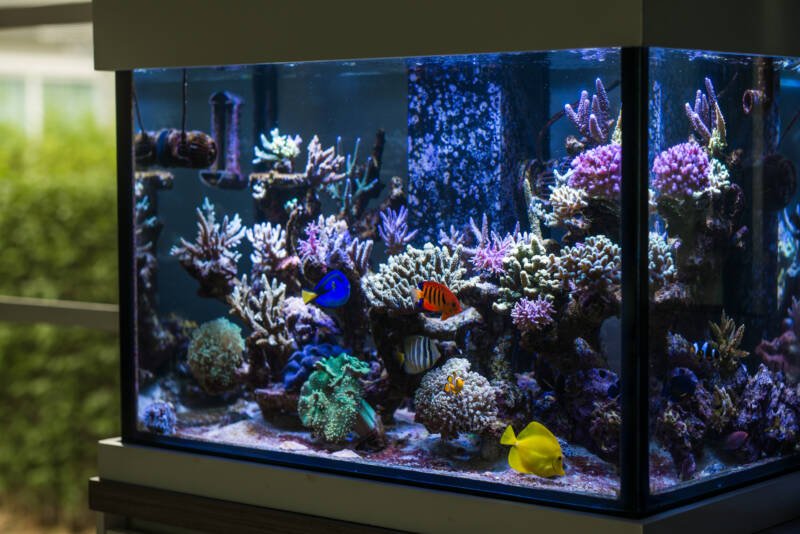 For the health of your blue tang, you should be familiar with keeping reef aquariums. The tank should be well cycled and stable before your fish touches the water.

The water should be warm and highly oxygenated, so consider heaters, thermometers, and power heads or wave makers.

Blue tangs tend to be shy, so well-secured hiding places are a must to keep stress levels low.

A home aquarium should replicate your fish’s natural habitat as closely as possible, including the following parameters:

Blue Tangs Have a Semi-Aggressive Nature

Remember those stinging spines? Your Dory may use them against other tank mates, especially if they reside within too small of a tank.

These shoaling fish can live in a group in a large enough tank; however, be careful when pairing them with other tangs or fish that look like them.

The Dory we all know and love was a small fish. However, in real life, blue tangs quickly grow bigger than you might expect – up to a foot in length (30.5 cm)!

The recommended tank size for these fish can vary from as little as 75 gallons (284 l) for a single fish to as many as 250 gallons (946 l) if you house them with other species.

Blue tangs are highly active swimmers that need adequate swimming space as well as room to mitigate their semi-aggressive nature.

Blue Tangs Have a Long Lifespan

Be prepared for a long-term commitment. With proper care, these fish can live up to 20 years.

Blue Tangs Are Prone to Illness

These fish are hardy once acclimated, but coming from natural environments, they can carry disease.

These fish should be quarantined for 30 days before you add them to your tank to prevent the spread of infection or parasites.

The lovable Dory is truly a wonderful part of our cinematic culture and an irreplaceable part of reef ecosystems.

If you are considering keeping one at home, remember that blue tang specimens are not easily bred in captivity. Most are wild-caught fish that are occasionally collected using questionable techniques.

As much as we adore these popular fish, they are best kept by experienced aquarists who know how to set up an ideal environment or by public aquariums, where you can enjoy their beauty while preserving natural populations.

Let’s hear from our experienced aquarists!

Show us your healthy reef aquariums with blue tangs!