All aquariums have to go through “the cycle.” You may be wondering, “What’s the cycle?”

Cycling a fish tank is “aquarium-speak” for starting up the biological filter.

Biological filtration is the process of converting toxic fish waste into harmless substances.

A variety of microbes are responsible for keeping the aquarium biologically balanced. For example, certain bacteria, called nitrifiers, convert ammonia fish waste into nitrate through the nitrogen cycle. 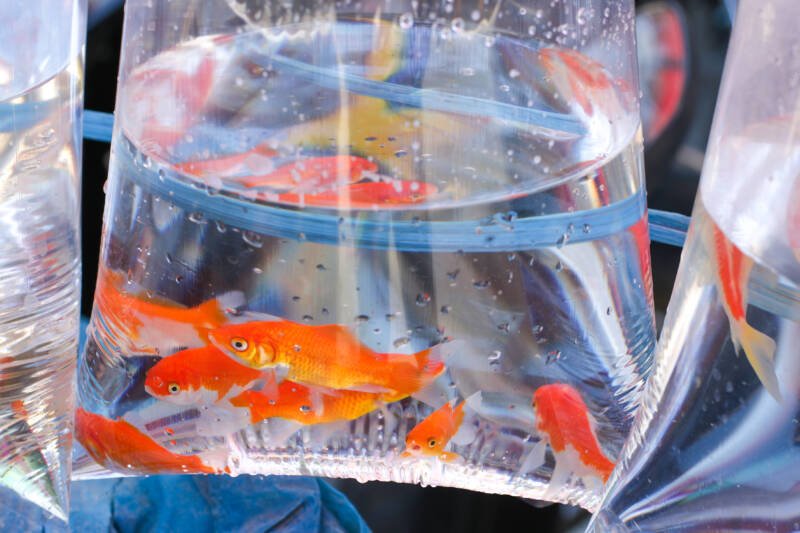 Fish release ammonia waste primarily from their gills. Ammonia build-up in aquarium water is harmful to fish and invertebrates like saltwater or freshwater shrimp and LPS, SPS corals.

The ammonia and nitrite are eliminated through the nitrogen cycle. The bacteria that form the biological filter live primarily on the gravel or live rock surface.

To start the cycle and create a working biological filter, two things are needed: nitrifying bacteria and ammonia.

The nitrifying bacteria must be present in the tank, and they must have ammonia as an energy source. Without both components, the biological filter won’t develop.

The standard method of starting a new aquarium is to add a few fish to the new tank and start feeding.

Bacteria on the surface of the fish inoculate the tank. The fish release ammonia into the water, feeding the bacteria and starting the nitrogen cycle.

The problem is it takes about four to six weeks to establish a fully-developed biological filter. During this time, ammonia and nitrite levels rise to harmful levels, stressing or killing the fish.

This is the reason new aquarists say, “I started my tank, but the fish died after about two weeks.”

The fish did not survive the rise in ammonia and nitrite during the initial four-week break-in period.

The idea behind fishless cycling is to establish a functioning biological filter before the fish are added. The ammonia and nitrite levels can rise and fall without harming fish.

There are two philosophies of fishless cycling. One uses small amounts of fish food to provide ammonia for the bacteria.

The other relies on the addition of an ammonia-containing chemical, usually a solution of ammonium chloride.

Once the new aquarium is filled with water and operating with a heater and filter for aeration, a “pinch” of fish food is added.

There is no defined formula for this method. The protein in the food decays and releases ammonia into the water.

Some aquarists use a more protein-rich food in the form of small chunks of fish or shrimp like you’ll find in a grocery store. You’ll get more ammonia per chunk of food this way.

Ammonia is “food” for bacteria. But where do the bacteria come from?

Bedsides entering the aquarium on the surface of fish, plants, and live rock, nitrifying bacteria can travel through the air in aerosols and will eventually “seed” the aquarium.

It is best to add a culture of bacteria from another aquarium.

A used filter cartridge or handful of gravel will add nitrifying bacteria to your new tank. A piece of live rock is great for starting a saltwater aquarium.

You can also use an over-the-counter bacteria “starter” to kick off the cycle. But not all products contain the right type of bacteria. The product should specifically contain nitrifying bacteria.

Monitoring the development of the biological filter

As the food decays, you should detect ammonia with a test kit. Ideally, the ammonia will reach 1-2 ppm.

As the biological filter matures, the initial ammonia level will begin to fall. As the ammonia level declines, you’ll see nitrite rise. This is because ammonia is being converted to nitrite by bacteria.

After nitrite peaks, it will decline as bacteria convert it to nitrate. The development of the biological filter can be monitored with aquarium test kits.

Another method is to add ammonia, along with a bacteria culture, to the aquarium.

You won’t have to wait for decaying food to release ammonia. You’ll also have better control over how much ammonia is added to the tank.

Ammonium chloride products are available for this type of fishless cycling.

Does fishless cycling speed up the new tank start-up process?

Nitrifying bacteria are slow-growers. It will still take around four weeks for the tank to cycle.

Fishless cycling eliminates the stress to the fish.

Can I use this method for a saltwater aquarium?

Yes. Be sure to add some gravel, live rock, or filter media from an established marine tank. You can also use a bacteria starter product.

How can I speed up the process?

Adding a live nitrifying bacteria culture or something from an established tank at the start of the cycle will dramatically cut down the cycle time.

You won’t have to rely on nitrifying bacteria drifting into your tank.

How do I know my tank is cycling?

Nitrate will begin to increase after about two weeks. This means the bacteria converting ammonia to nitrite and nitrate and forming the biological filter.

Should I make a water change while cycling?

Under normal circumstances, no. If ammonia or nitrite rises above 5 ppm, make a 25% water change to bring the level down to 2-3 ppm.

Should the nitrate level go up?

This means the biological filter is maturing.

How do I know when the aquarium is cycled?

When both ammonia and nitrite rise and fall to zero, the tank has cycled.

Should I make a water change when the cycle is finished?

If you used fish food to cycle the tank, make a 25% water change to remove organics in the water. Add fresh activated carbon too.

When can I add fish?

You can fish when the aquarium has cycled.

If you have any questions or comments, please leave them below.