If you are either a brand-new member to the reefing hobby, or a seasoned professional, you will have most likely encountered hitchhikers coming in from live rock. There are countless different species, ranging from aiptasia to asterina starfish.

Let’s have a look at the ones I had experience with. 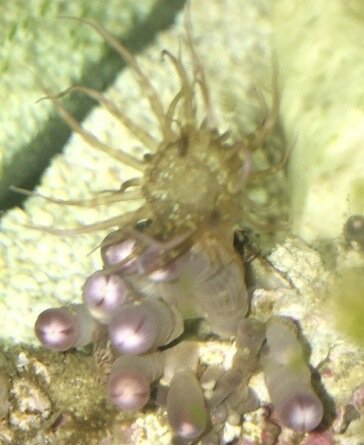 This was the first aiptasia that I ever had. It came in as part of the live rock that came with my zoanthid colony. At first, I just thought one of my zoanthids had an issue, however a few weeks later I found out that was not true.

When I first found out that this stung coral, I decided that it would be in my best interest to try and remove it from my tank. I was unable to go down to the local fish store for a prolonged period of time, so I took to google to find out what the best course of action was.

I used this article from liveaquaria and the best way for me was to inject the aiptasia with lemon juice.

The other options consisted of:

After Lemon juice did not work for me, I resorted to adding a large filefish to my tank. This led to the infestation being cleared within 2 weeks.

Another ill-received hitchhiker is the Asterina Starfish, which is often viewed as a pest as some people report issues with them eating coral. Despite this, I and many others agree that this does not occur in most species of asterina.

Asterinas are often very, very small being less than a centimeter wide in most cases, and are often not star shaped.

These starfish can quickly reproduce, even if you start with just one, which could quite easily lead to an infestation. I left mine in when I only had one, and now I can report at least 4 different starfish, in a reef tank that has been running for around 8 months.

They are most commonly dealt with by a Harlequin shrimp, who will hunt for the stars. On its own, the harlequin shrimp is a stunning invertebrate, however its diet is so specific the only way that you can keep one is through feeding asterinas.

Another extremely common hitchhiker is the bristle worm.

There are well over 10,000 different species, so knowing the exact type that you have is important to ensure that you know that it is friend or foe to your reef tank.

The Common Bristle Worm is by far and large the most common hitchhiker and it covers any bristle worm that co-exists within the reef tank. These worms are most often a pink, grey or light brown color, and are completely harmless to the reef tank.

Bristle worms are bottom feeders, that you will rarely see. They will eat any food that falls to the bottom of the tank, and any other detritus. Bristle worms are needed as it helps maintain a high and stable water quality, and they go into spaces that no other member of the clean up crew can reach.

There is also the Fire worm, which gains his name from the sensation that feels like fire that occurs after you touch the animal. They are easily identified by their heavier body, with a bright read color on the bristles.

These bristles will stick into any fish that gets too close, however they are not lethal and are just a deterrent. There are 120 species of fire worms. Consider them as harmless as the common bristle worms.

This is a spirorbid worm. They have the appearance of a tiny white dot and it is often found in the main tank, overflows, sumps and on the return pumps within your reef.

These are filter feeders, and are completely harmless.

The feather duster shaped head pops out to allow them to get nutrients from tiny particles within the water. They are reef safe and will not touch your coral.

Should you feel the need to, you can safely remove these from your reef by simply scraping them off. Doing this is completely safe.

Under this category, there are several different pods, which are Amphipods, Copepods and isopods. These are all slightly different.

Amphipods are tiny little critters that most fish will eat as part of their normal diet. Some fish requiring these as a part of their specialist diet, such as mandarin fish. Amphipods have a shrimp-like shape, and can get quite large, with some people reporting large ones eating their zoanthids.

Copepods are found in parts of the tank that are predator free, and are great food for mandarin fish, alongside wrasses. They are considered desirable to the reef tank. Copepods eat small plankton foods and are part of the food chain that consumes detritus from the reef bed.

There are pods called Isopods, and these are smaller than amphipods, and look similarly to miniature ants. They are often eaten by many different species of reef fish, including wrasse. These are reef safe, and are often found in zones that are free from predators.

Within the reefing hobby, there are countless issues that you have to deal with on a day to day basis and, as long as you take the right precautions to ensure that there are no unwanted hitchhikers coming in, these will not be an issue.

Making sure that you are able to dip every new piece of rock or coral is essential to make sure that you do not receive anything unwanted.

Despite the fact that there are countless immensely helpful hitchhikers from experience, it is not worth the risk of getting some helpful ones, when there are many species that are not helpful.

From the few species that have been mentioned, I hope that I was able to better inform you of the inherent risks that come from live rock. I hope that you are able to add some comments from hitchhikers that you have experienced, and if you have any questions please feel free to ask!