Are you a beginning aquarist who is ready to jump into the world of corals? Perhaps you are a seasoned veteran of saltwater tank care who is looking for a pop of color in their reef tank.

Whatever it is that brought you here, the Blastomussa coral (or blasto for short) will not disappoint.

This low-maintenance, easy-to-care-for coral is perfect for beginners. Its range of color and eye-catching beauty enhance any tank.

As a bonus, this peaceful species can cohabitate with numerous other species in a community aquarium. 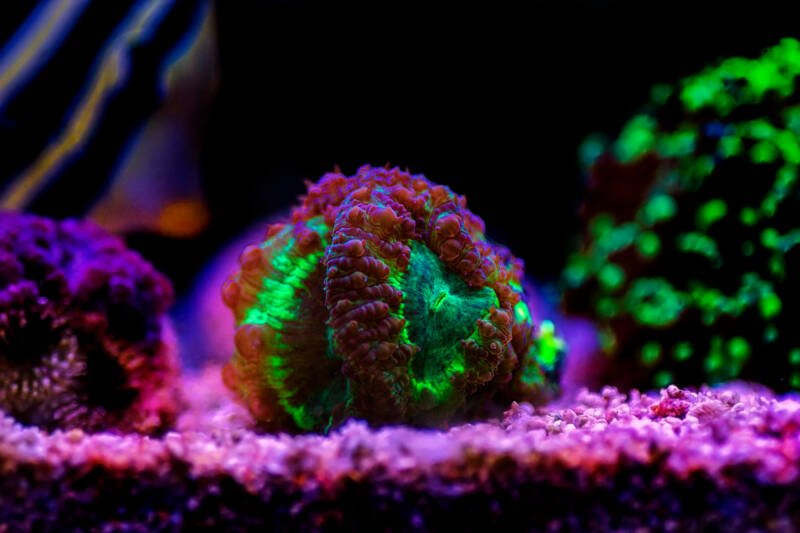 Read on for more information on the blasto, including how to best care for, feed, and propagate it.

Blastomussa are large polyp stony (LPS) corals. LPS are the reef builders of the world, with large fleshy polyps that secrete calcium carbonate “skeletons” from their base to form incredible structures.

Their polyps come in a range of colors, primarily red and green, but can also feature yellow, purple, brown, and pink.

There are two common species of blasto coral: Blastomussa wellsi and Blastomussa merletti.

The wellsi has the larger polyps of the two. These polyps can reach between four to five inches (10 to 13 cm) in diameter atop sturdy tubes. 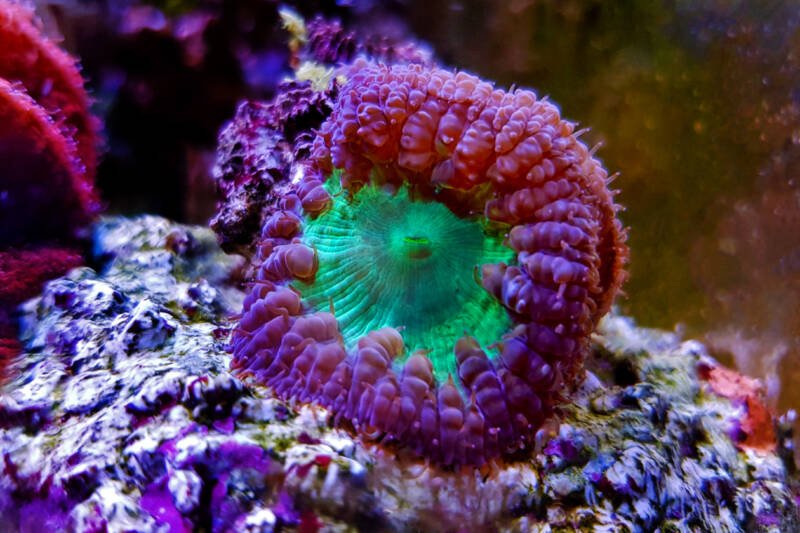 The merletti has smaller polyps at about an inch to two inches (2.5 to 5 cm) in diameter and delicate tubes below the polyp. 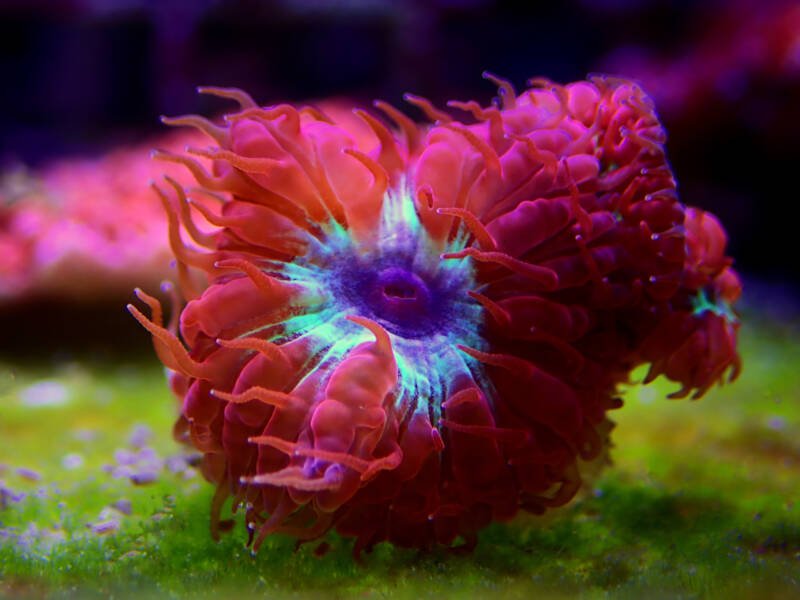 It is often called pineapple coral for its similar appearance when multiple polyps are bunched together.

You will find this coral spread throughout the Indo-Pacific region in areas such as the Great Barrier Reef, the Solomon Islands, and Fiji.

It lives in shallow, sloped reef environments but can extend down the water column to nearly 130 feet.

This species favors moderate to low water movement areas in its natural habitat.

As we mentioned, this species is prized for its ease of care. The most important aspects of getting this coral right are the water parameters, placement, and lighting.

All aquarium species fare best with stable water conditions. As hardy as the blasto is, it is no exception.

In addition to stable temperature, hardness, and pH, you need to monitor trace elements in the water, such as calcium and strontium, and supplement as needed.

Change out a portion of the water each week to maintain cleanliness.

For the optimum health of your blasto coral, maintain your water within these parameters:

This coral is not aggressively territorial but does need room to grow. Therefore, the minimum tank size for your blasto coral should be at least 30 gallons (114 l). 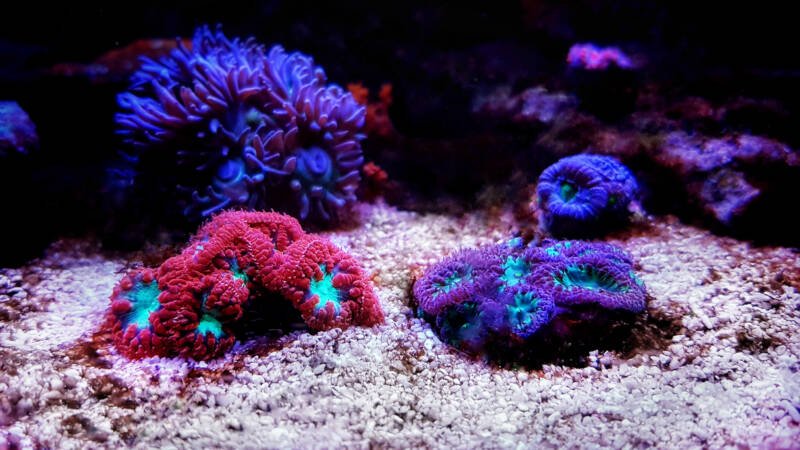 These corals attach to live rock over a sandy substrate in their natural habitat.

You can easily replicate these conditions in your tank, placing your coral in the middle to bottom levels.

Make sure it is situated in an area where sand is less likely to be kicked up by other tank inhabitants and settle into the polyps.

Keep your blasto away from other aggressive corals and anemones. The blasto is low on the LPS coral aggression scale and lacks the ability to defend itself.

To mimic the blasto’s natural environment, establish a low to moderate, indirect water flow in the aquarium.

Too strong of a flow can damage the delicate sweepers on the polyps.

Another plus to having blasto coral is that they do not require expensive LED reef lighting kits and can thrive with standard aquarium lighting.

This species does best with moderate light. You want the lighting to be low but sufficient to allow the zooxanthellae, which are marine algae growing symbiotically with the coral, to produce nutrients through photosynthesis.

The merletti needs slightly stronger lighting than does the wellsi.

Measure the lighting to ensure a PAR value between 50 and 100 umols. Lower values may bring out more color in your blasto. Too high of a value can harm the polyps.

If you see that the polyps are not opening or if they have become swollen or bubbled, then relocate your blasto to a more shaded area or lower the lighting.

The peaceful nature of blasto coral allows them to pair with a variety of species in a reef tank.

They are not aggressive toward other corals, nor do their sweepers possess a powerful enough sting to harm fish.

The downside to this is that they are not able to defend themselves against more aggressive invertebrates and polyp nibbling fish.

While there are plenty of common saltwater fish that are reef safe, there are just as many that are not.

Pay special attention when selecting butterfly fish, angelfish, puffer, wrasse, and starfish, as some sub-species will not pair well while others will coexist peacefully. The same goes for invertebrates, such as anemones and urchins.

The primary food source for blasto coral is produced through photosynthesis by the tiny zooxanthellae living symbiotically with the coral. The corals will also eat plankton in the water column.

You can supplement their diet with spot feeding, just make sure every polyp gets fed.

Spot feeding can aid in your coral’s growth rate and may bring out more color. 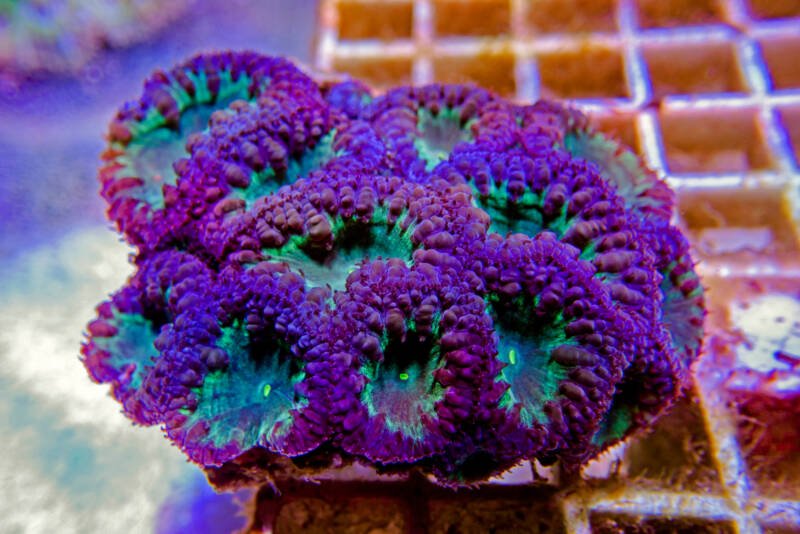 This species propagates through genetic cloning, and each individual polyp is a clone of the one beside it.

These clones form from a central base. As the clone matures, the connection to the base closes off, making the structure independent.

You can easily remove these individual structures with a Dremel or bone saw.

To encourage the growth of the newly fragmented segment, place it in an area with low water flow and lighting.

The safest way to encourage fragment growth is to set up a separate frag tank for the coral until it is established.

Blasto corals are slow-growing, with the merletti growing slightly faster than the wellsi.

You can aid the growth rate of both varieties with spot feeding, but overall, plan on a slower rate.

There are many plusses to selecting a blasto for your home aquarium. This hardy, peaceful, and colorful coral brings easy care, unfussy feeding, and stunning looks suitable for the tanks of beginners and experienced aquarists alike.

Show us your coral!

What is your favorite tank setup for Blastomussa corals?