Goldfish are, without a doubt, one of the most popular species of aquarium fish. 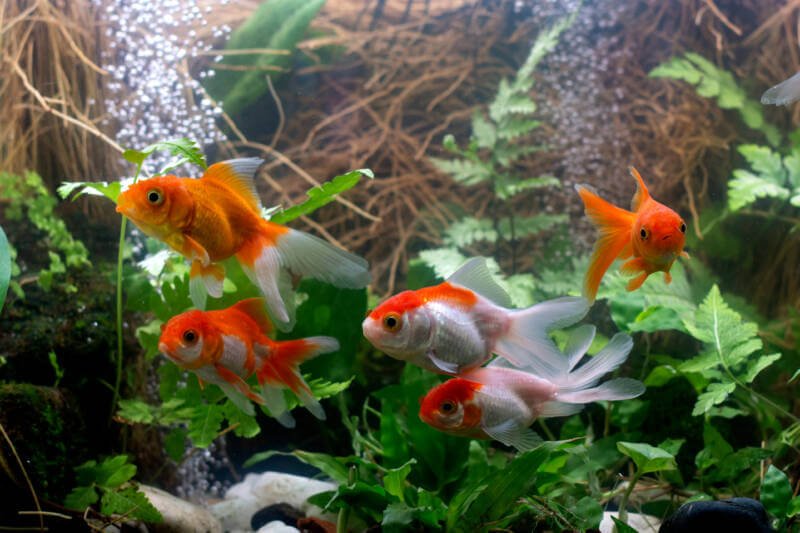 Goldfish tolerate a wide range of water conditions, are easy to please with an equally wide range of foods, and are relatively hardy, depending on the type.

They are also amazingly efficient breeders. Capable of spawning when they are only one year old, or about four inches in length, a female can lay up to 1,000 eggs at a time.

Kept outdoors, they can spawn once a month during the warmer months of the year. Kept inside in warmer waters, they can reproduce year-round. 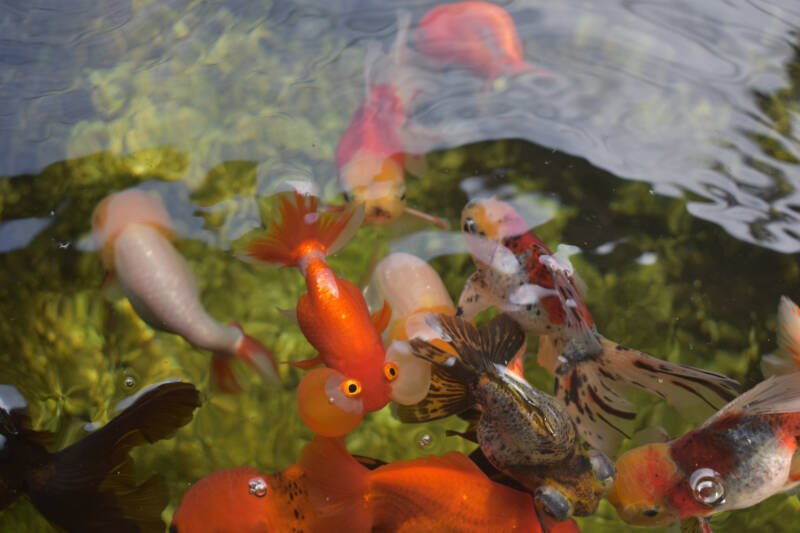 Whether you are looking to breed your goldfish or simply wondering what those tiny spheres are in your tank, we will discuss the basics in this article.

The first thing to know: there is no such thing as a pregnant goldfish.

These fish do not carry live young within them until gestation, and they do not give birth to live fish. Goldfish are an egg-laying species.

Differences between Male and Female Goldfish

Next, it is helpful to know which of your goldfish are male or female.

Female goldfish tend to be rounder, even when not carrying eggs. When carrying eggs, they may look slightly more rounded on one side or the other.

Males will be slimmer, especially when viewed from above, and have longer, pointed pectoral fins.

If you suspect your goldfish are ready to breed, check the head, gill covers, and pectoral fins of your male fish for the presence of spawning tubercles. These will appear as small, white bumps.

How to Tell if Your Goldfish is Carrying Eggs

If you notice that your goldfish is a little rounder and plumper, it could be that your female is carrying eggs.

First, try to rule out other causes for the change in your goldfish’s shape. Be aware that they can swell from illness, such as dropsy, or from being overfed.

On top of the increased size of your female goldfish and the presence of white tubercles on your male, another sign of goldfish breeding is behavioral.

If the female is carrying eggs and ready to spawn, she releases a pheromone into the water. The male will then begin to chase her and bump her abdomen or sides to encourage her to release eggs.

You would normally give your adult goldfish one meal a day to avoid overfeeding these constant eaters.

When spawning, however, your goldfish will have more physical demands: carrying eggs, courtship, and finally, the process of spawning itself. Take care of them with more frequent feedings: two to three times per day.

Three times per week, include protein-rich foods, such as bloodworms, daphnia, or brine shrimp.

When she is ready and the environmental conditions are right, the female goldfish will release hundreds of eggs into the tank.

In fact, a goldfish can lay up to 1,000 eggs at a time, although not all of them will survive.

These eggs will stick to plants, or if you have added one, a spawning mop. Egg-laying typically occurs in the early morning hours.

The male will then release milt to fertilize the eggs. The entire process can last a long time, up to four hours.

Once the fry hatch, do not be alarmed if you see them stationary near the tank’s bottom or sides. It takes a few days for them to become free-swimming.

At first, they will not look much like goldfish, but over the coming weeks, they will develop and grow.

For the first two to three days, the fry will use their egg sacs as a food source. After that time, feed them commercial fry food, baby brine shrimp, or daphnia.Start out feeding them three times per day.

As they grow into juvenile goldfish, you can reduce the number of feedings to twice daily.

Keep the young fish in their separate tank until they are large enough to survive in the adult tank that is big enough, so the adults will not consider them food.

To ensure the best chance of survival for your goldfish eggs, set aside a 10 to 20-gallon tank in which they can develop and hatch.

Fill the tank to a depth of eight inches with water from your adult tank. Use a spawning mop to move the eggs from the adult tank.

Spawning occurs at temperatures between 68 and 74-degrees Fahrenheit (20 to 23 degrees C).

The increased food intake required during spawning may contribute to higher levels of waste in the tank.

Dirty water can promote the growth of fungus in unfertilized eggs. This fungus can spread to healthy eggs and kill the developing fry. Keep your water clean by changing up to 20% of the water daily and remove any unfertilized eggs.

Install a decent filter to keep your water clean. Select one that produces a low current as goldfish favor more still waters.

A sponge filter or under gravel filter will do well and be safe for the newly hatched fry. Installing an air pump will help to aerate the water.

A heater can allow you to control the water temperature, increase temperatures as needed, or keep conditions consistent. Adjusting temperatures can help stimulate spawning or control development times for the eggs.

How can you tell if a goldfish is pregnant?

Although a goldfish does not get “pregnant,” she may be carrying eggs and ready to spawn if you see her belly become rounded and full.

What do I do if my goldfish lays eggs?

If your goldfish lays eggs and the male has fertilized them, you will either need to remove the eggs or the parents if you want them to hatch and the fry to develop.

This is easy to do if the eggs have been laid on a spawning mop or other removable item.

Raise the water temperature in the hatching tank to at least 75 degrees Fahrenheit (24 degrees C), check for and remove any white eggs, and keep the water aerated and clean.

How many babies do goldfish have?

A goldfish can lay anywhere from a few hundred up to 1,000 eggs at a time.

However, some of these eggs do not get fertilized, some do not develop, and others may not hatch.

After two or three days, look for a small, dark spot and a curved black line in the egg, which are the eye and spine of the developing fry.

How long do goldfish stay pregnant?

Goldfish are not technically pregnant; they are egg layers.

However, the female can rapidly produce eggs and can be ready to spawn once a month.

Do goldfish eat their babies?

Yes, goldfish can eat the eggs or newly hatched fry.

The best way to avoid this is to set up a separate tank for hatching the eggs. A spawning mop makes it easy to remove the eggs and transfer them.

Although goldfish are remarkably easy fish to care for, there are a few things to consider to successfully hatch the eggs and raise the fry.

Water conditions and temperature, aeration, and separation from the parents will ensure healthy goldfish babies.

Feel free to share your experiences with breeding your goldfish below!

What advice would you give someone who is breeding their fish for the first time?