Found in healthy numbers in Nigeria, Cameroon, Gabon, and the Congo River basin, this fully aquatic species spends most of its time submerged, coming to the surface occasionally for air. 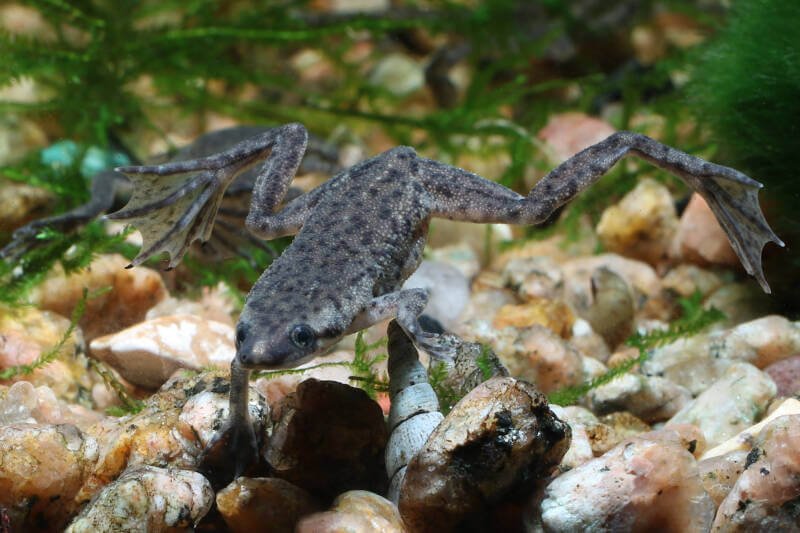 Their adult size of around two inches, combined with their relaxed nature, allows aquarists to consider them for a range of community tank settings and pairings.

These popular pets are active and social, living best in groups and paired with similarly docile fish, such as guppies and tetras.

Interested in breeding your frogs? Read on for answers to common questions about African dwarf frog eggs and tadpoles.

How do you tell if your frog is male or female? 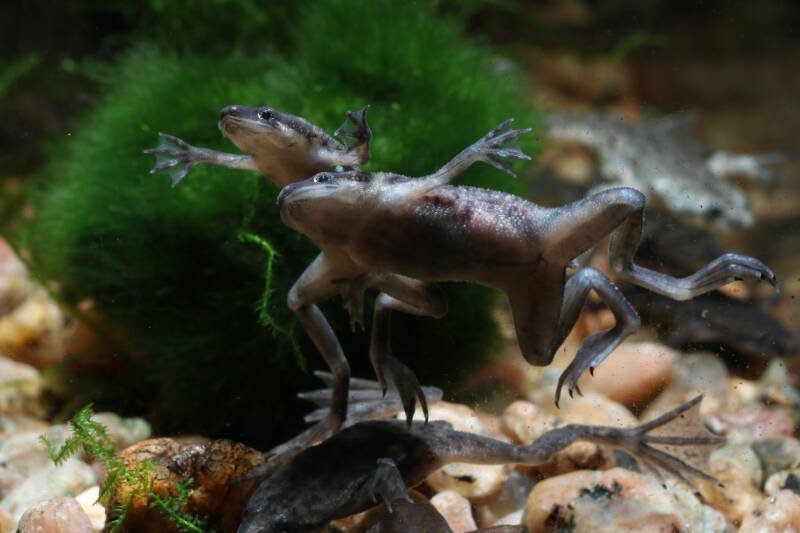 There are subtle indications of sexual dimorphism in African dwarf frogs (ADF).

The first is the overall size of the frog. Females tend to be larger, whereas males are smaller and slimmer. In addition, males have a small white gland behind each front leg.

In this species, only the males will sing, which can sound like a low buzzing noise.

They typically make this sound at night, and the noise indicates they are seeking a female to breed.

ADF are sexually mature at the age of nine to 12 months.

It is important to note that another species of frog is often confused with the ADF.

African clawed frogs (Xenopus laevis) grow significantly larger than the ADF and are more aggressive. Both the male and female of this species will sing.

How do African dwarf frogs breed?

For African dwarf frogs to have the best chance of successfully mating, the conditions should be just right.

To stimulate mating behavior, it is best to mimic the conditions in their natural habitat during the breeding season.

Slowly lower the water level in the tank to half its normal level or about 7 inches (18 cm) in depth over a period of two weeks.

Follow with a quick refill of warm water, close to 80°F (27°C). Hold this temperature in the tank for the next two weeks.

Feed the mating pair well. Their diet should include a variety of protein-rich food sources, including bloodworms and daphnia.

You may first notice the male singing to attract a mate, a signal that your ADF are ready to breed.

Then, within two weeks, your frogs should begin their mating process, which is called amplexus.

During amplexus, the male will grasp the female around the abdomen.

He will remain there as the female repeatedly swims to the top of the tank, releasing eggs at the surface of the water. The male will simultaneously fertilize them.

This process usually occurs at night and can take several hours.

You will know it is finished when the female remains motionless, and the male releases her.

How long does it take for an African dwarf frog to lay eggs after mating?

Mating and egg-laying occur simultaneously as ADF release and fertilize the eggs during amplexus.

The mating process should begin within two weeks of the water change stimulus. If your frogs do not mate in this timeframe, then perhaps the pair was not ready, and you can attempt breeding again at another time.

ADF females can release up to 750 eggs in a single mating event. You will find these eggs floating or adhered to surfaces.

Eggs that sink to the bottom of the tank and do not adhere to any surfaces are likely not fertilized.

The eggs will be tiny and look like small black dots. Unfertilized eggs may appear cloudy or white.

The eggs hatch quickly, within two days if the conditions are right.

What do I do if my ADF lays eggs?

If you want the eggs to develop, the best practice is to move them to a separate frog tank.

African dwarf frogs do not make the best parents and have been known to eat their eggs.

In addition, both the eggs and tadpoles may be tempting targets for other inhabitants of a community tank.

Set up a separate tank with a minimum size of 10 gallons. Select a tank that is longer than it is tall as these frogs need to reach the water surface from time to time.

Line the bottom of the tank with a soft, sandy substrate. If you use gravel, make sure the pebble size is large enough that the frogs cannot swallow it.

Plants should be well secured as these frogs are diggers.

Keep the lid tightly secured so that the frogs do not escape. The water level should be lower than the top of the tank to allow for air exchange and for the frogs to reach the surface to breathe.

For best development, the eggs need a higher water pH and temperature than do adult frogs.

The higher pH promotes a healthier environment for the eggs to develop, and higher temperature encourages the eggs to hatch.

Install a heater and use a thermometer to ensure the water stays at the correct temperature.

Keep the water free of mold and fungus by performing regular cleanings and water changes.

Newly hatched tadpoles are small and can be sucked up by standard aquarium filters.

The safest option is to turn the filter off and perform regular water changes (anywhere from 10% to 50% a day) to keep the water clean.

Make sure the water you add is the same temperature as in the tank because the tadpoles are sensitive to drastic shifts in water temperature.

If you opt to use a filter, cover the intake or consider a sponge filter, corner filter, or gravel filter to keep the young safe. These filters have reduced current and are less likely to suck up the small tadpoles.

Install an air stone to keep the water well oxygenated.

These frogs mate frequently. Given the right conditions, African dwarf frogs will produce up to 8,000 eggs a year!

Each clutch laid can contain from 500 to 2,000 eggs, and they can lay up to five clutches per year.

Will ADF eat their own eggs?

Yes. African dwarf frog parents do not attend to the eggs and can consume them.

Once the eggs are laid, remove them to a separate tank for hatching and development of the young tadpoles.

Eggs should hatch anywhere from 48 hours to a week after they are laid.

Their back legs will develop within the first 10 days, followed by the front legs 15 to 20 days later.

The total time for them to grow to adulthood is two months from the date of hatching.

Foods should be fresh or live during the initial stages of development as the tadpoles will feed near the top of the water column.

Frozen foods can be introduced once the frogs have fully developed and are able to feed near the bottom.

Food in the Early Stages of Development

After they hatch, the tadpoles will live off their egg sacs for the first few days.

Once they have depleted their egg sacs, they will become free-swimming.

Feed the tadpoles liquid fry food for the first day or so. Then, you can switch to live-cultured foods, such as freshly hatched brine shrimp, for the next 10 days.

Baby brine shrimp are a rich source of nutrients for these carnivorous tadpoles.

Once their hind legs have developed, you can transition to larger flake food, daphnia, or cyclops.

Around 15 to 20 days later, when the front legs have developed, you can again increase the size of their food sources. Artemia and mosquito larvae are good choices during this development stage.

Foods for the Adult Stage

Once the tadpoles have completed their growth to an adult, about two months from hatching or 30 days after formation of the front legs, they can eat an adult frog diet.

Remember that African dwarf frogs do not have teeth and therefore need food that is sized appropriately for them to consume whole or foods that they can easily break apart.

How often do you feed African dwarf frog tadpoles?

African dwarf frog tadpoles need to eat once per day as they are developing.

When they reach the adult stage, you can reduce their feedings to three or four times a week.

Even with all the precautions and preparations mentioned above, remember that the mortality rate for young African dwarf frog is quite high.

Often, up to 80% of the eggs and tadpoles will not survive to adulthood.

Do not be discouraged by this. It is a natural occurrence. Continue to provide the best conditions for your tadpoles with good water maintenance, tank cleaning, and proper feeding.

Watching the changes, your tadpoles go through as they develop into adult frogs is an incredible experience – one that for sure will be worth the work!

Send us a note below and let us know your experiences with raising African dwarf frog tadpoles!

What foods have your young frogs enjoyed most?