Betta fish (Betta splendens) are one of the most easily recognized and popular species for home aquariums.

These elegant fish originate from rice paddies in South Asia, and their array of colors, flowing fins and tails, and unique personalities are irresistible.

Also known as Siamese fighting fish, many bettas are kept as single specimens due to their aggressive nature. 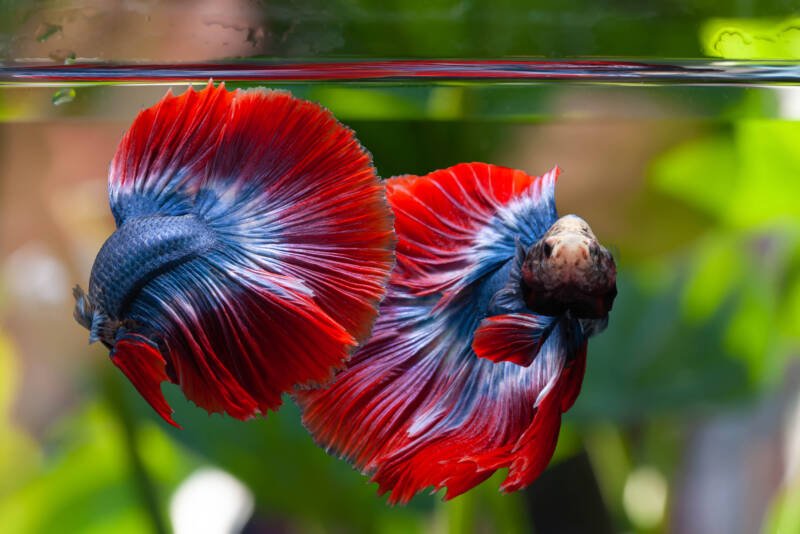 While it can be tricky to pair them, it is not impossible.

Planning and preparing a suitable habitat, having a backup plan for housing your fish, and providing top-notch care can make a betta pairing a reality. Below, we discuss the basics.

The first thing to keep in mind when pairing betta fish is their temperament.

This is an aggressive species, and knowledge of how to mitigate and manage their behavior is essential.

Both male and female betta fish can fight. 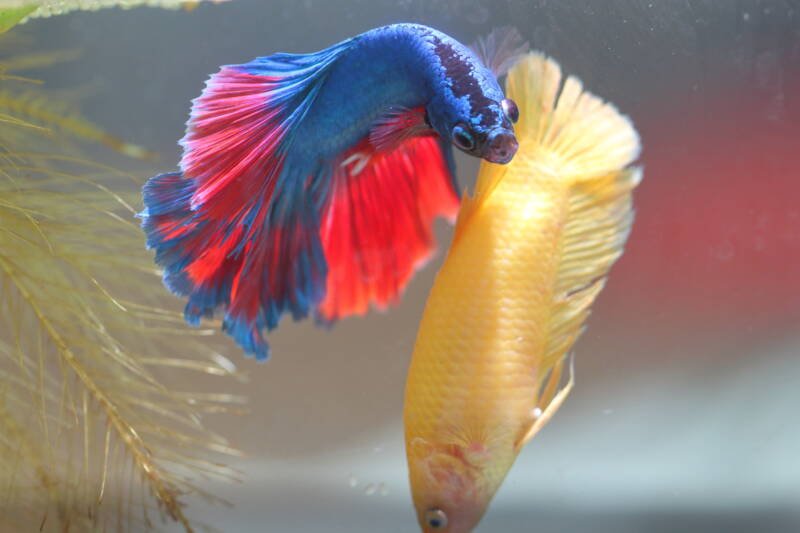 Males will almost always fight each other, so we do not recommend ever keeping two males in the same tank.

Females kept in the same tank will fight among themselves to determine a hierarchy. These fights generally resolve themselves, whereas a fight between two males could prove deadly.

Males can be aggressive toward females during mating.

This is especially true once they have completed their bubble nest. At that time, the male may view the female as a threat to the eggs and can harass her to the point of exhaustion or death. 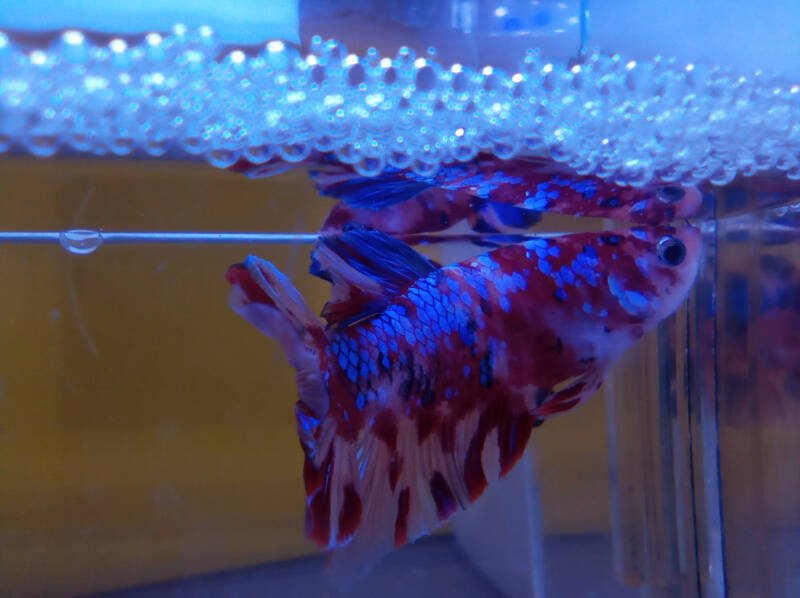 Note that betta fish can also be aggressive toward fish of other species sporting similar colors or long fins.

Despite their aggressive nature, there are options for betta fish to live together.

A single male betta can live with a single female. Another viable option is one male living with a female betta sorority.

In both cases, you will need to monitor your fish for signs of aggression, especially if breeding has occurred. 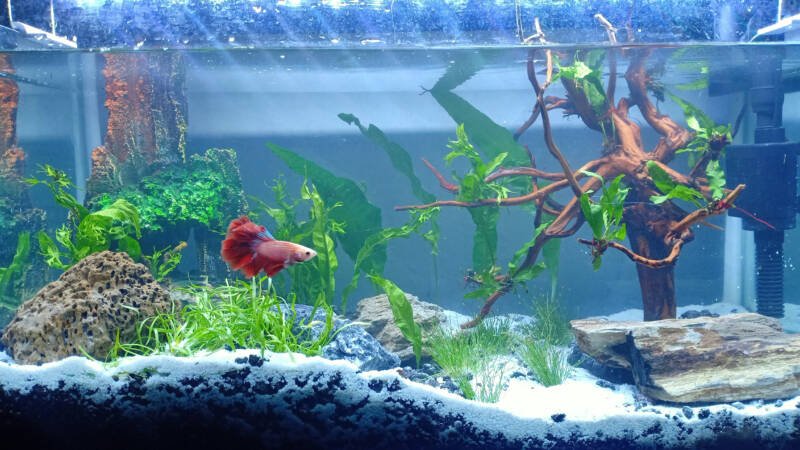 While it is popular to keep these fish singly in smaller tanks, when you decide to keep multiple bettas in the same tank, one that is too small is a recipe for disaster.

Betta fish are incredibly protective of their personal space, and an appropriately sized tank permits the establishment of individual territories.

Plan on a minimum tank size of 15 gallons (60 l) for two betta fish. If you plan to keep a betta harem with your male, bump the size up accordingly.

A good rule of thumb is to increase the tank size by five gallons for each additional fish.

Keep in mind that these guidelines are just that. Individual temperaments may dictate a larger tank size to accommodate their personalities.

Set Up a Backup Tank

We recommend that you have a backup betta tank available.

These fish are notorious for not getting along with their tank mates, so even if you have the perfect setup, it is best to have a backup plan should your fish not take to living together.

This is especially helpful if your fish breed and produce a bubble nest. In this case, you will need to remove the female to your backup tank.

Plan Your Tank Layout and Décor 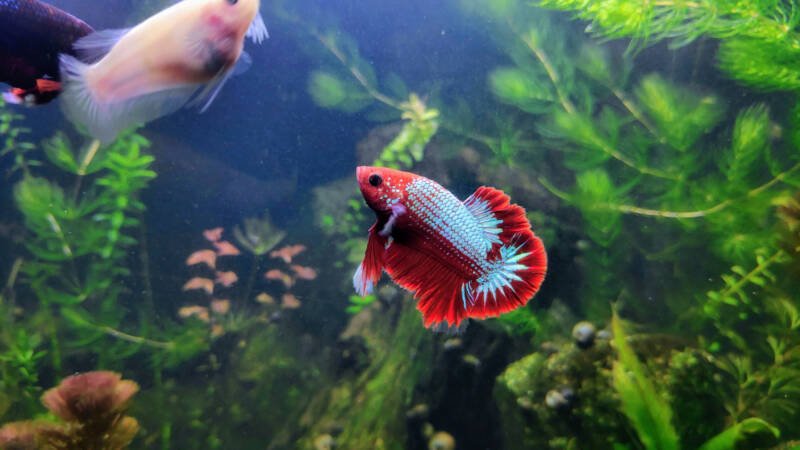 Knowing the betta’s need to establish territories, plan your tank layout with the goal of creating a comfortable environment where your fish can behave naturally while minimizing conflict.

This means lots of plants and plenty of hiding places.

Plants help to break up the line of sight, which can reduce the odds that your fish will fight.

Try sturdy plants, such as anubias, java fern, and Amazon sword. These plants provide cover for different levels of the water column while still allowing access to the surface.

Your betta will often swim to the surface to get air using their labyrinth organ and to feed.

Hiding places can be caves, driftwood, or other structures into which your fish can retreat as needed.

How to Introduce a Single Male and Female Betta 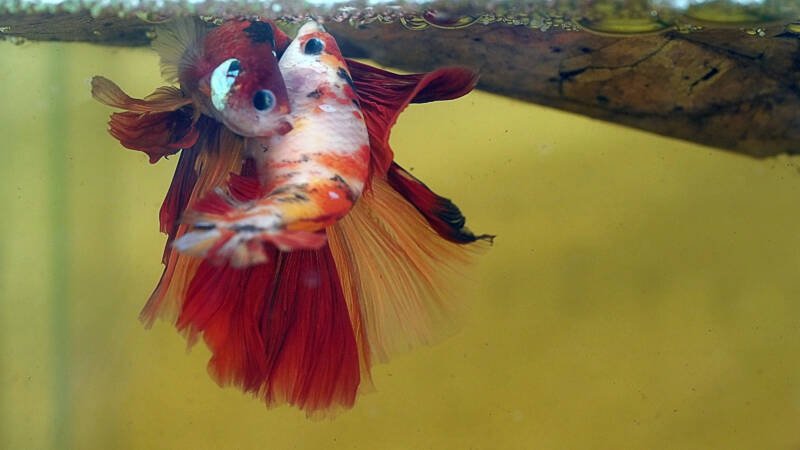 When introducing bettas, the odds of success often rely on the individual temperaments of the fish.

The best methods are gradual introductions using barriers to prevent any direct contact and fighting. Here are a few methods to try:

Have your established female betta in her current tank. Place the new male fish in a separate tank and position that tank close to your female.

Let them see each other. It is normal for them to flare, but after a while, they will become accustomed to the other’s presence and the flaring behavior should subside.

2. Introduce them to the same tank using a tank divider

Before you add the new betta, install a tank divider, keeping the amount of space on each side of the barrier the same.

This will allow the two fish to become familiar without permitting them to come in direct contact. Again, they may display aggression through flaring. Look for the behavior to lessen.

After a few days, if aggression has reduced, you may remove the barrier and/or introduce them to the same tank.

If the two begin fighting, you may need to reinstall the barrier or separate them. Thus, the recommendation for the backup tank!

How to Introduce Your Male Betta to a Sorority 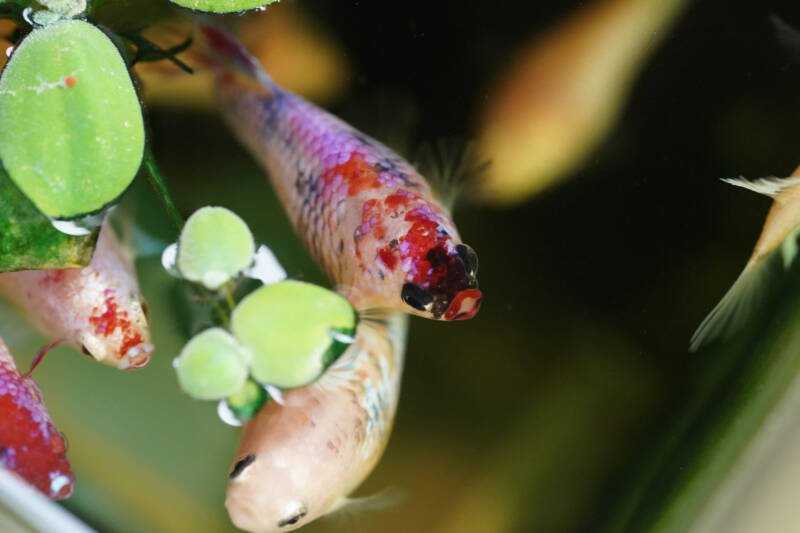 Take the following steps when introducing your male betta to a female sorority:

It is better to introduce a male to a tank of established females rather than the other way around. Female bettas are somewhat less territorial than males, which should make for a more peaceful transition.

Remove the betta sorority from the tank and change up the layout. This erases any previously held territories.

Hopefully, when introduced, the fish will focus more on establishing new territories than on fighting with each other.

Add him for a short amount of time before going on to the next step, so he does not have the opportunity to claim the entire tank as his own.

Keep an eye out for aggression among the females. The situational change may prompt a disturbance in the hierarchy of the sorority, and the females may fight to determine the dominant female.

This aggression to determine the one that will mate with the male can result in bullying or injury to weaker fish.

Be prepared to adjust the mix as needed and remove any fish that are being picked on.

Look for Signs of Fighting or Stress

Betta fish love their personal space, and a change in their environment or living situations can raise their stress levels, which in turn elevates their aggression.

After you introduce them, be vigilant for signs of fighting or stress.

Signs of stress include loss of appetite, a change in activity levels, clamping fins, excessive hiding, or a change in color.

A stressed betta will appear pale and can develop vertical dark stripes, known as “stress stripes.”

Signs that your fish are preparing to fight include fin and gill flaring, followed by ramming and nipping if one of the bettas does not back off.

If you do not see these activities but notice torn fins, increased hiding, and missing scales or red marks on the body, then your fish have likely been fighting.

Adding fish to an environment increases the bio load and can offset the natural balance of the system.

Bettas are sensitive to shifts in their water conditions, and their aggression can increase as a result.

Monitor your tank for any increases in ammonia, nitrites, or nitrates. Ammonia and nitrites should be 0 ppm, while nitrates should stay below 20 ppm.

Perform regular weekly water changes of around 25 percent. Install a filter but keep the current low.

Never place your tank near a window where sunlight can rapidly heat the water.

An acceptable pH range is between 6 and 8. Keep it as close to neutral as possible.

Bettas have a wide range of tolerable water hardness levels, between 5 and 35 dGH.

Have a Backup Plan

Should pairing two or more bettas prove unsuccessful, there are other options for keeping your betta in a community tank.

Some potential tank mates for your betta include larger ghost shrimp, the African dwarf frog, cory catfish, and snails.

Guppies can also pair with betta fish with precautions. For the best chance at a peaceful tank, pair female bettas with female guppies.

Monitor the fish for any signs of aggression. Even with these peaceful tank mates, your betta simply may not have the temperament necessary for community interaction.

Your backup plan should always include a separate tank for your betta should they prove to need the solitude.

While it is possible for male and female betta fish to live together, there is still the chance that your fish, no matter what precautions you take, will not get along.

Proper planning, a controlled introduction, excellent care, and a backup plan will give you the best chance for success.

Share your story! How successful have you been in housing your betta fish together?