Cloudy aquarium water is a frustrating problem for many aquarists.

You’ve stocked your tank with beautiful fish and aquascaped the aquarium with plants and other decorations. But now the water is murky, and it just won’t clear up.

Cloudy water can be persistent. Some novice aquarists even give up on having an aquarium! 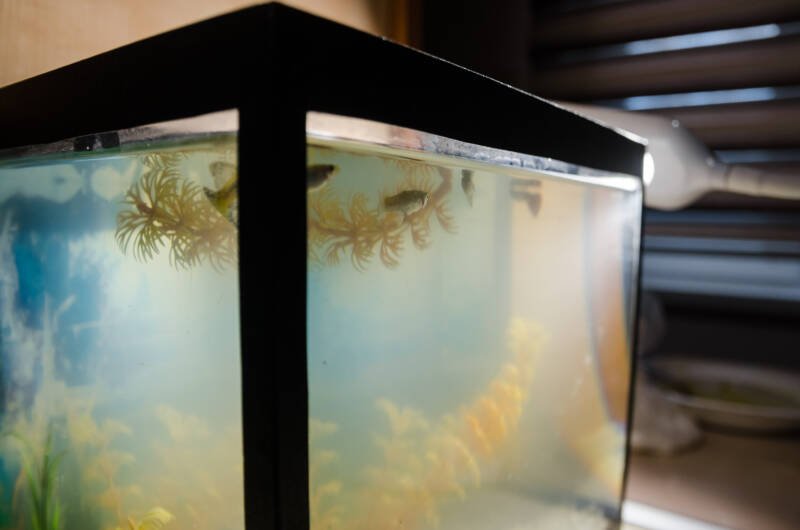 The truth is, everyone, even seasoned fish-keeper, has to deal with cloudy water once in a while. There is no reason to panic!

The first step to eliminating cloudy water is figuring out what caused it. If you don’t know what is creating the haze, you might not be able to fix it.

Let’s take a look at what causes cloudy aquarium water.

Cloudy water in a brand-new aquarium

The most common cloud in a new tank occurs as soon as you add water to the aquarium.

Some types of aquarium gravel are naturally dusty. Even if you’ve rinsed it in tap water, it can still cause cloudy water. This is because tiny gravel particles get suspended in the water.

Suspended gravel dust looks like a very light haze in the water. You can see everything in the tank, but the water doesn’t sparkle.

Don’t panic and drain the aquarium. Chances are the cloud will form again as soon as the tank is refilled. That’s because some gravel dust will re-suspend in the water.

Relax! Your aquarium filter will remove the particles over the next few days. The tiny particles will be captured on the filter cartridge and gradually clear the water.

Colored aquarium gravel is coated with an epoxy. This seals the gravel and prevents dust formation in shipping and handling.

Suspended particles in an established aquarium 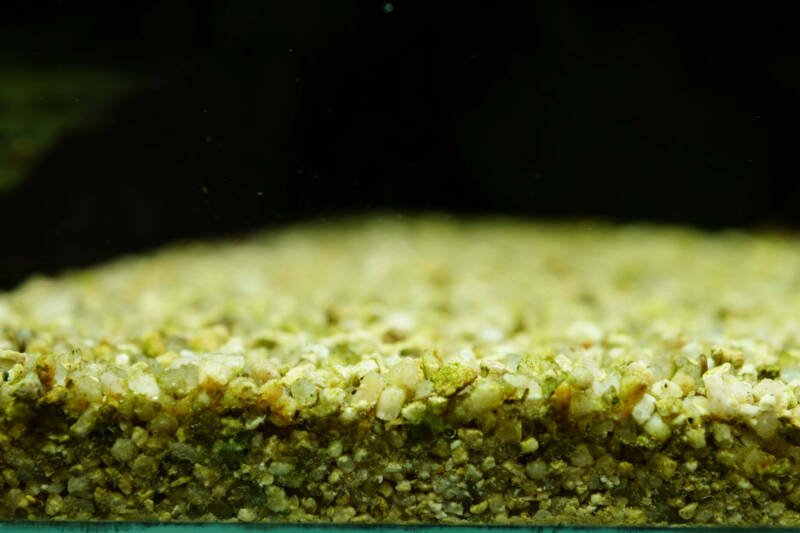 Cloudy water caused by “dirt” can be a problem even in an established tank. Aquarium gravel is the primary place where dirt collects in the aquarium.

If the dirt is disturbed by fish or rearranging the decorations, it will often become suspended in the water.

A little dirt is normal. But if the gravel is really dirty, it is a sign something is wrong.

Dirty gravel is caused by:

Many aquarists think the answer is to buy a “better” filter. This won’t work because the cause of the problem remains.

Here are the steps to take to solve this problem:

You may need to switch to a larger aquarium to accommodate large fish like cichlids and goldfish. These fish produce a lot of solid waste. It can overwhelm a small tank, even if it has a powerful filter.

A larger tank will also reduce stress and allow the fish to stay healthy.

While cloudy water caused by gravel dust appears right after adding water, another type of cloud often forms several days after adding fish to the aquarium.

It usually starts out as a mild haze and gradually gets heavier over time.

Unlike suspended dust from gravel, this type of haze is caused by microscopic organisms.

Newly started aquariums are relatively sterile. However, when fish are added, they introduce a variety of microbes to the tank.

These microbes are a natural part of the aquatic environment. But in a new tank, it takes time for a biological balance to occur. Until this happens, the water will have a hazy appearance because the microbes are growing in the water.

Novice aquarists sometimes drain the aquarium and restart the tank.

Instead of allowing the biological balance to proceed, they wash out the aquarium and start the process over again. Soon cloudy water reappears, causing frustration. Don’t make this mistake!

While hazy water is natural and will clear up over a few weeks, aquarists sometimes make it worse.

Allow nature to balance out the tank, and the water will clear up.

Yellow water in the aquarium

The yellow color is caused by the build-up of dissolved organics in the water. Activated carbon will remove the yellow tint and restore clarity to the water.

So, if you’ve been overfeeding your tank, it is possible to have yellow water plus cloudy water.

Over-feeding causes a build-up of organics and stimulates bacteria to reproduce and cloud the water.

If your aquarium filter does not have a way to use activated carbon, an upgrade is recommended. Activated carbon filtration removes the organics that cause discoloration.

Green aquarium water is a topic we’ve addressed in algae control articles. Under the right circumstances, free-floating algae will grow so fast that the aquarium water looks like pea soup.

The algae can be so dense that it appears as a green cloud. The green cloud can form in new and established aquariums.

We cover ways of controlling green water algae in another article, but here are a few tips.

When using an algaecide, be sure to follow the dosing instructions based on the size of the aquarium. Over-dosing can harm the fish.

Green, cloudy water can sometimes be removed with a water clarifier.

How do water clarifiers work?

Water clarifiers are liquid additives that cause individual suspended particles, which may be able to pass through the aquarium filter, to clump together.

Expect to see the filter cartridge coated with green algae within 24 hours of adding the clarifier.

Be prepared to change the cartridge and add another dose of clarifier. 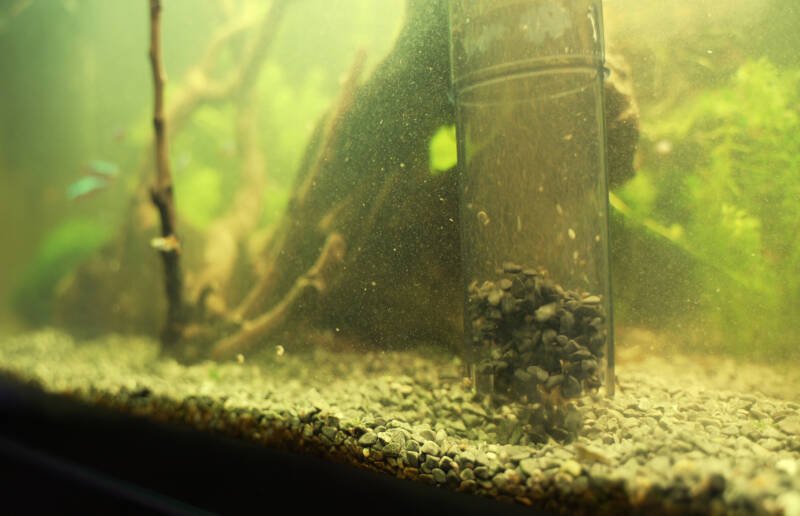 Will a larger filter help with cloudy water?

But if you’re over-feeding or have too many fish, a larger filter won’t help.

No. Activated carbon is designed to capture dissolved chemicals that cause odors, medications, and organics that cause yellow water.

Does ammonia cause cloudy water?

In the aquarium, ammonia is colorless and odorless. A crystal-clear tank can be suffering from high ammonia.

Over-stocked and over-fed aquariums are often dirty, cloudy, and may also have an ammonia problem. However, cloudy water is not necessarily a sign of ammonia in the water.

How often should I replace the filter cartridge?

Once the filter material is clogged with debris, it stops capturing particles. In most cases, the cartridge should be replaced once a month.

Use a gravel siphon to clean the gravel. This way, you’ll be making a water change at the same time.

I changed the water, but the cloud came back.

Cloudy water caused by living organisms can be difficult to clear up. It may take time and several water changes to make a difference.

Make sure the fish aren’t being fed too much!

Larger aquarium filters and water clarifiers are powerful tools for keeping the water clear. But it is important to understand why cloudy water appears.

New aquariums almost always have a little cloudy water in the beginning. A properly stocked, biologically balanced aquarium will have clear water.

If your aquarium has too many fish or too much feeding, it will be unbalanced and have cloudy water problems.

Use the tips in this article to evaluate your aquarium and make changes if necessary. If you have questions or comments, leave them below.