If you’re an aquarium plant enthusiast or thinking about growing live plants, you may have heard about the Walstad method.

The Walstad method takes a low-tech approach to raising aquarium plants that is appealing to many aquarists. 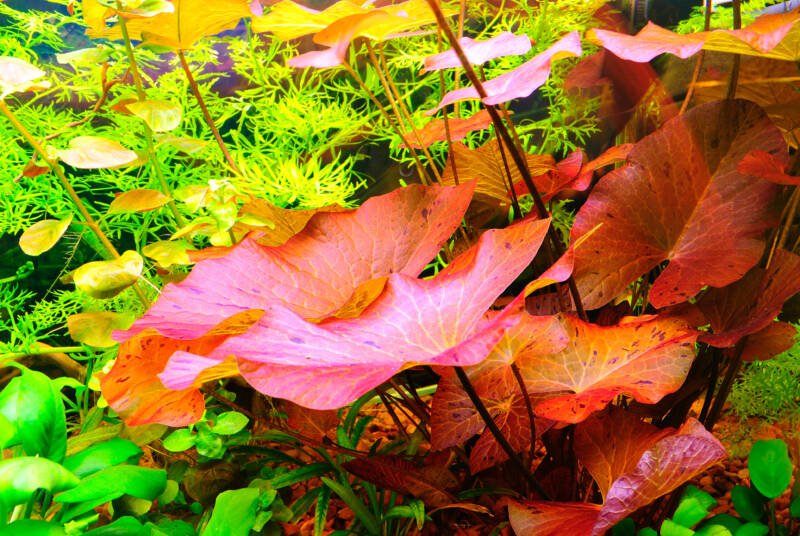 Before exploring how the Walstad method works, it’s helpful to review the typical approach to growing aquarium plants.

Poor-quality lighting has always made it hard to grow submerged aquatic plants. 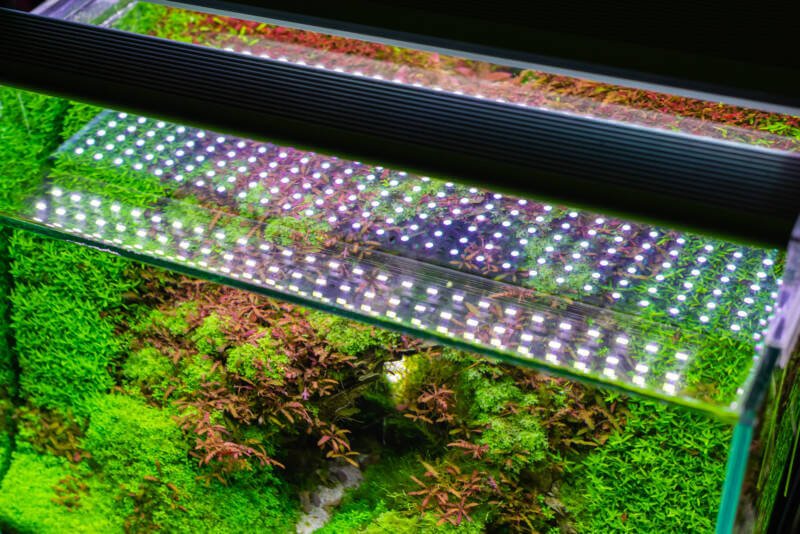 The bright lighting made it easy to raise LPS or SPS corals by providing the right color spectrum and light level.

This technology was adapted to the planted aquarium side of the hobby.

The bright light often forced plants to grow at maximum rates. This caused a shortage in carbon dioxide, an essential nutrient used in photosynthesis.

The carbon shortage stunted plant growth. The remedy was to pump CO2 gas into the aquarium.

Other nutrients, like iron, were quickly used up by the fast-growing plants.

As a result, aquarists had to dose their tanks with trace elements and sometimes nitrate and phosphate to reverse nutrient deficiencies.

Diana Walstad is a long-time aquarist and aquatic plant enthusiast. She noticed how well aquatic plants grew in nearby ponds and even sludge-filled dairy farm tanks.

Diana wondered if the nutrient-free aquarium gravel everyone was using was inhibiting the plants’ normal growth.

She started experimenting by using soil instead of aquarium gravel. European aquarists had been filling small pots with soil and burying them under the gravel for years.

Diana wondered if she could add a fertile soil layer underneath the aquarium gravel. She tested the theory and discovered her plants thrived in aquariums. But there’s more!

Diana wanted her planted tanks to be low-tech. She tried placing her aquarium near sunny windows to see if it would work.

The goal was to have the plants flourish without the use of high-tech gear.

She found that many of her aquatic plants were able to grow and reproduce when the aquarium was kept by a sunny window.

If a sunny window was not practical, a simple full spectrum aquarium light worked well.

What about algae growth?

One of the main philosophies of speeding plant growth through high-tech equipment is to prevent algae growth.

The idea is to force the plants to out-compete algae for nutrients, thus starving the algae.

This method often requires frequent water changes to dilute the nutrients in the water.

Dianna found that her aquariums remained algae-free with almost no effort on her part. She rarely made water changes.

Allelopathy is when an organism releases a chemical that inhibits another competing organism.

In the case of aquatic plants, they release natural substances that suppress algae growth on the leaves.

Since an aquarium is a closed environment, the algae-inhibiting chemicals accumulate in the water and keep the tank free of algae.

Diana figured out that her tanks stayed algae-free when she kept water changes to a minimum.

With only small water changes and no activated carbon filtration, the natural algae-controlling substances remained in the water, keeping the tank clear and clean. 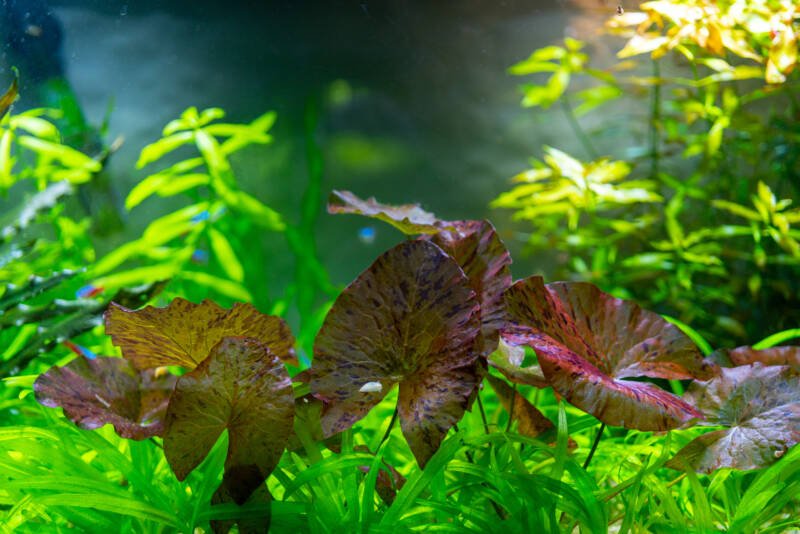 Diana wanted other aquarists to understand her methods. She eventually wrote Ecology of the Planted Aquarium to describe her low-tech way of growing plants.

She didn’t invent these concepts. Diana borrowed them from research conducted on natural aquatic habitats and the experiences of European aquarists.

Diana brought all these concepts together in one book, which served as inspiration for thousands of plant enthusiasts around the world.

How to set up a natural planted aquarium

The main idea is that a natural “Walstad” aquarium is focused on plants first, fish last.

The good news is that a thriving planted aquarium will support tropical fish and help them develop beautiful colors and fins.

But you can’t pack the tank with too many fish because it pushes the natural balance away from a carefree aquarium.

Here are the main principles of a Walstad aquarium:

The idea behind the soil layer is simple. Plants absorb nutrients mainly through the roots.

By providing a source of slow-release nutrients under the gravel, the plants get the food they need, and the algae are starved for nutrients.

Place .5 to 1-inch soil on the bottom of the aquarium, then add fine gravel on top. The gravel depth should be at least one inch thick. Some aquarists use two inches.

The gravel keeps the soil in place and prevents it from being stirred into the water. Fish food and tap water also provide some trace elements and minerals.

The soil layer will also naturally stimulate beneficial microbes that slowly down organic matter and release nutrients to the roots.

This natural process also creates carbon dioxide for the plants. The soil layer is an important part of the Walstad method.

Supplies needed for the Walstad method

The good news is that you don’t need a lot of special materials to have a natural planted tank.

While you can purchase aquatic plant soil or specialty gravel, it won’t be the same as what Diana uses.

She has experimented with heavy clay soil, a mixture of decomposing leaves and potting soil, and other common soils. The main thing is to provide the plants with a .5-1-inch layer of soil in the root zone.

Don’t use soil that has been exposed to pesticides or any known contaminant. Contaminated soil could inhibit growth or kill the plants and fish.

Slowly fill the aquarium with water

Unlike gravel-filled tanks, you can’t just dump water into the aquarium. It will disturb the soil and cloud the water.

Place a saucer on the gravel and slowly pour water into it. The saucer buffers the force of the falling water and prevents the soil from being disturbed.

Diana has grown plants in just about everything from plastic soda bottles to full-size aquariums. While soda bottles are inexpensive and fun, you won’t be able to create a nice show aquarium with fish.

An aquarium of any size is a better starting place for a naturally planted aquarium. Keep in mind a taller tank will require brighter light to penetrate the water.

Will this method work for all aquatic plants?

After many years of testing, aquarists have proven that not all plant species grow well.

Remember, the Walstad method was developed to work with low to medium lighting. The idea is to have slow, steady growth without the need for extra CO2 injection.

Part of the fun of using the Walstad system is to experiment and see which plants will grow for you. Expect some species to die back and others to thrive with minimal care.

What kind of fish can I keep?

As with any planted aquarium, fish add movement, color, and even some fertilizer in their waste.

You can keep any plant-friendly fish. Just don’t over-stock the tank.

The extra food they require ultimately causes nutrient levels to rise in the water and may tilt the balance to algae growth.

Will it work as a shrimp aquarium?

They’ll really thrive as they forage for microscopic live food on the plant leaves.

Should I add plant fertilizer?

As a rule, no fertilizers are needed. The soil should provide all the nutrients the plants need and minimize algae-promoting nutrients in the water.

The decomposing organic matter will add just the right amount of nutrients to the roots.

The soil slowly releases just the right amount of nitrogen, phosphorous, and trace elements like iron directly to the plant’s