The health and wellbeing of your fish are prime considerations when you want to keep multiple species together in a community tank.

There should never be a pairing of fish that is done without reflecting on the possible outcomes. This is especially true when one wants to house betta fish with another species. 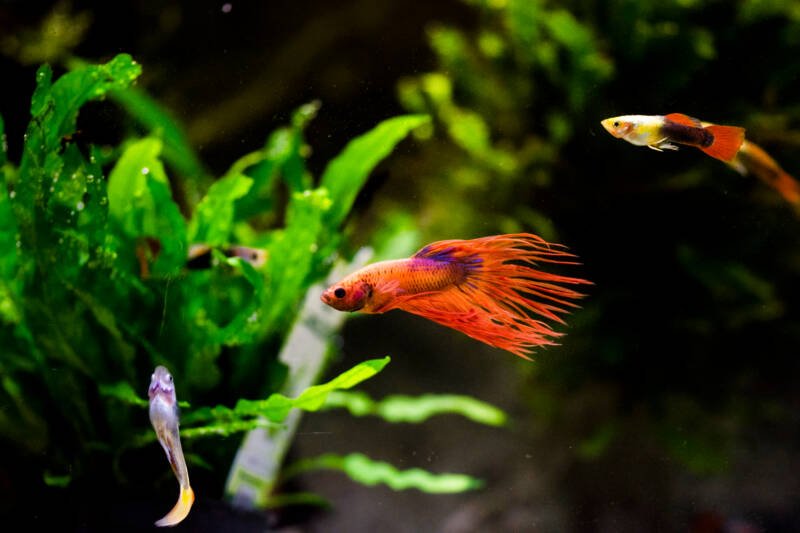 While it is not recommended to house multiple male bettas in the same tank, it is possible to keep a single male or a group of females with other fish as they do not tend to see other species as a threat.

That said, the temperament of the betta and the coloration and sex of the other fish must be considered to have a peaceful tank.

In this article, we discuss the ability to safely keep betta fish and guppies in the same tank. Yes, these two species can coexist, but there are some caveats and things to consider.

Setting Up Your Tank for Success 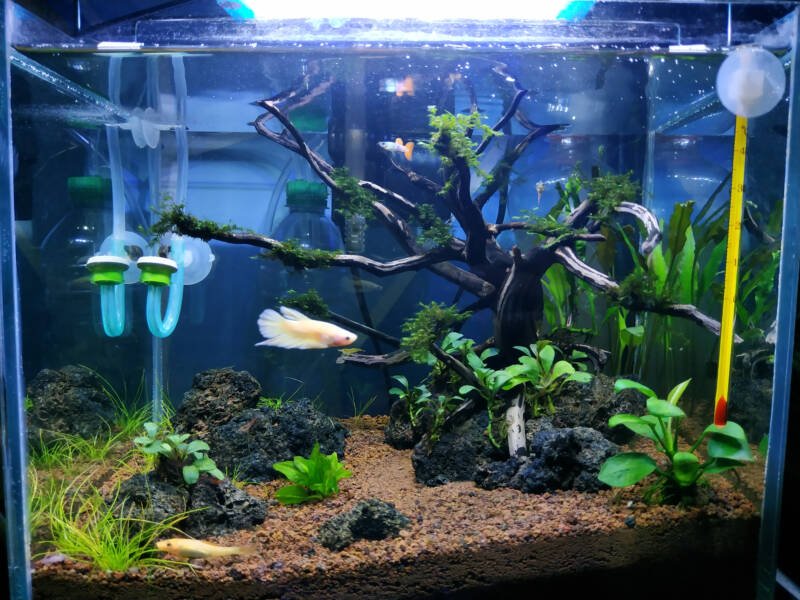 Having your betta and guppies be peaceful tank mates starts with setting up an ideal environment. Fortunately, these two are quite compatible in terms of aquarium needs.

Due to the territorial nature of the betta, plan for a larger tank than you would think necessary for such a small species. 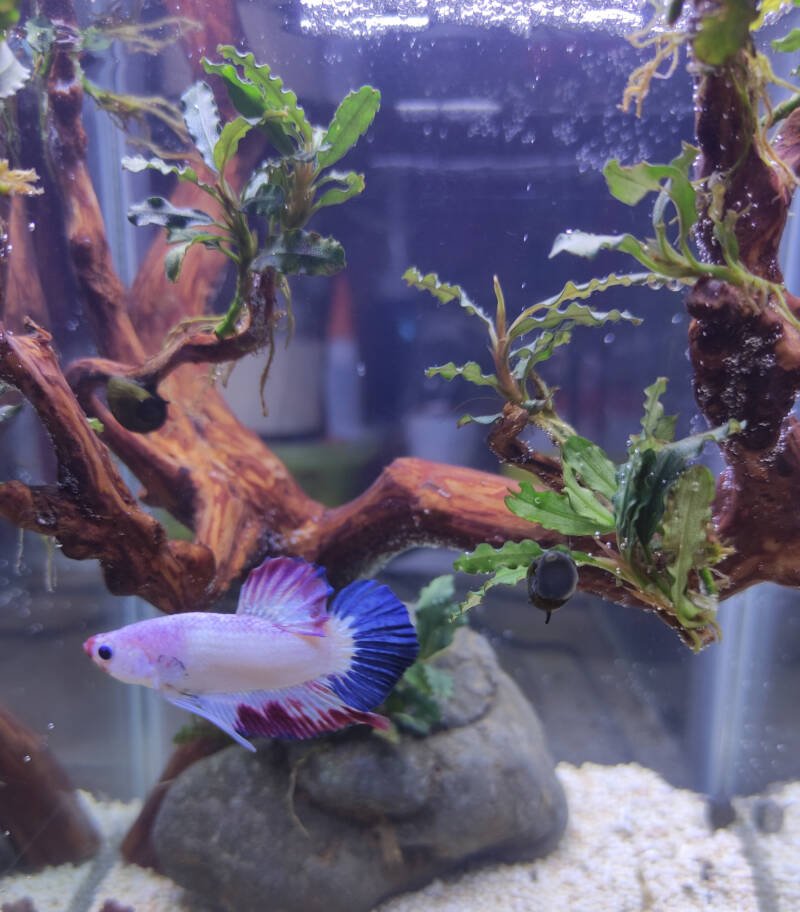 Your primary goal in setting up a peaceful tank is to break up the line of sight as much as possible and ensure plenty of hiding places.

You can do this by adding artificial or live plants, driftwood, rocks, caves, or any other decorative item.

Some of our favorite plants are the large-leafed anubias, java fern, Amazon sword, and hornwort. Space them to allow the fish to establish territories and to give them safe places to hide when needed.

The water parameters for these two species match nicely in terms of temperature and pH.

Setting each of these near the middle of the overlap range shown in the table below is perfect.

Where the two fish differ is in preferred water hardness, with the betta preferring much softer water than do guppies. In this case, aim for a hardness closer to the guppies’ preference.

The dietary needs of the betta and guppy match quite well. Both species can eat pellet or flake foods as the base of their diet.

They feed near the surface, so floating pellets are a good choice. 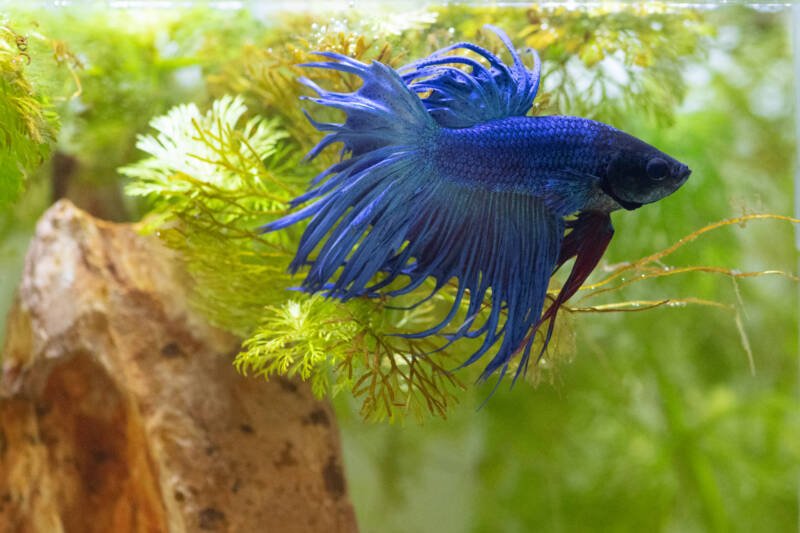 Each will enjoy meaty treats of brine shrimp, mosquito larvae, or daphnia.

Make sure your betta is getting its share of these meaty foods. They need this protein source in their diet, whereas for the guppy, it is a nice treat.

Guppies also need a vegetable-based food from time to time as they cannot thrive on meaty foods alone.

You can feed these fish on the same schedule as both species require two to three feedings a day.

Fasting for a day a week is recommended to keep betta fish from becoming constipated. Skipping a day of meals is good for your guppy as well for the same reason.

Watch your fish as they eat to make sure each is getting the nutrition they require. Guppies can be greedy at feeding time and may outcompete the betta for food.

Keep in mind that uneaten food will drop to the substrate. Plan on regularly vacuuming the substrate to prevent ammonia spikes due to decaying food.

When planning a tank with bettas and guppies, take into consideration the nature of each species. 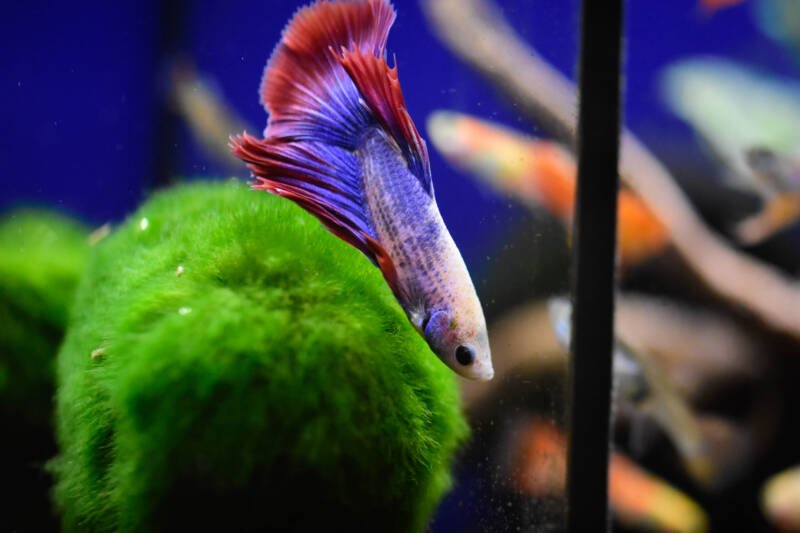 You should know that bettas, especially males, can be extremely aggressive. They do not have the common name of “fighting fish” for no reason.

The following are some triggers for betta aggression:

Territory: A betta’s aggression typically stems from a need to defend resources and territory.

If they feel another fish has invaded their territory, they will react to protect their space.

If they see another brightly colored or long-finned species, they will assume it is a rival and will react to chase off their competition.

Establishing dominance: Both males and females can become aggressive when determining a hierarchy within the group.

The dominant fish is the one most likely to mate, and they will fight to gain this position.

While males will continue this fight for dominance, a group of females, or harem, will generally settle down once the hierarchy is established. 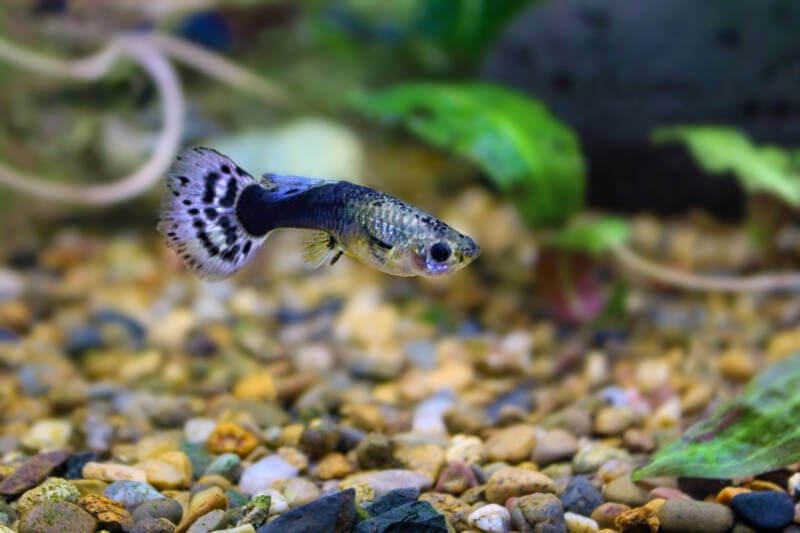 Guppies tend to be milder in their personality; however, there are nevertheless times when they can be aggressive as well.

Below are some things that prompt aggression from guppies.

Improper male-to-female ratio: This is the biggest trigger for male guppies. Typically, a ratio of one male to three females is required to keep the males happy.

Establishing dominance: Aggression can also come from an attempt to establish a hierarchy within the group. If you notice that one particular fish is always hiding, it can be an indication they are being picked on. You may also see one fish regularly chase another to show dominance.

Keep an eye on your fish’s fins. If you are seeing signs of fraying or fin loss, there may be aggression among your fish.

It is important to determine if the aggression is coming from the betta or from within the guppy group itself so that you can properly handle the situation.

Due to the nature of the betta fish, it is best to keep a single specimen with a colony of guppies.

More than one female betta in a tank can result in hierarchical aggression; more than one male will lead to all-out fighting.

Keeping a male and female betta together can be risky as when they breed, their chances of territorial aggression increase. A group of guppies helps prevent the betta from singling out a fish to pick on.

Below are potential combinations of bettas and guppies.

This combination is simply a bad idea. Nothing will trigger a male betta’s aggression faster than the presence of another male (regardless of the species) with long, colorful, flowing fins.

They will assume the guppy is an intruder on their territory and will aggressively defend it.

In this scenario, your unfortunate guppy will come out on the losing side. In addition, multiple male guppies placed in the same tank without any females will also become aggressive.

Female guppies are less likely than male guppies to nip the fins of your betta fish and it is rare to see them showing aggression.

Remember that this scenario will work only if your female guppies are not brightly colored.

In addition, you should plan on having a good-sized tank and ample hiding places to allow your guppies to rest.

This scenario is risky. Normally, female bettas are not nearly as aggressive as males. However, problems may arise if the male guppies attempt to mate with the female betta.

Again, your guppies will receive the brunt of the betta’s aggression and will not fare well.

Also, multiple male guppies without any females in the tank will fight among themselves.

This is a potential combination. If keeping a male betta, make sure any male guppies in the group are not too colorful.

Remember that male guppies can become nippy when guarding their females.

If you keep multiple male guppies in the tank, make sure they are in a proper male-to-female ratio of 1:3.

This combination gives the best chance of success.

While there are no guarantees that the tank will be completely peaceful, you can improve your odds with a well-planned tank, stable water conditions, and adequate food. 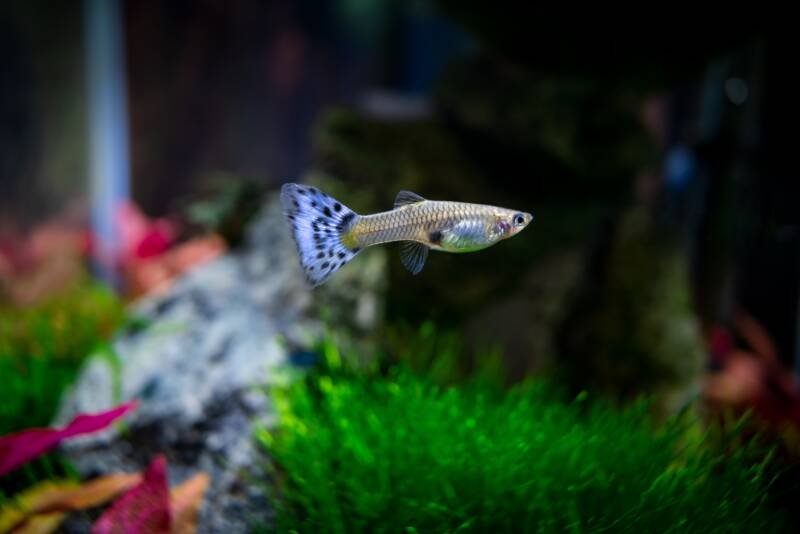 There is always a little uncertainty when introducing fish in a community tank. This is especially true when they have a reputation for aggression.

Before attempting an introduction, have a backup tank prepared or use a tank divider in case the meeting does not go well.

Establish your guppy group first, then introduce the betta.

This order of introduction to the tank lowers the chance that your betta will exhibit territorial aggression as it has not had the opportunity to claim one.

What Are Some Other Options? 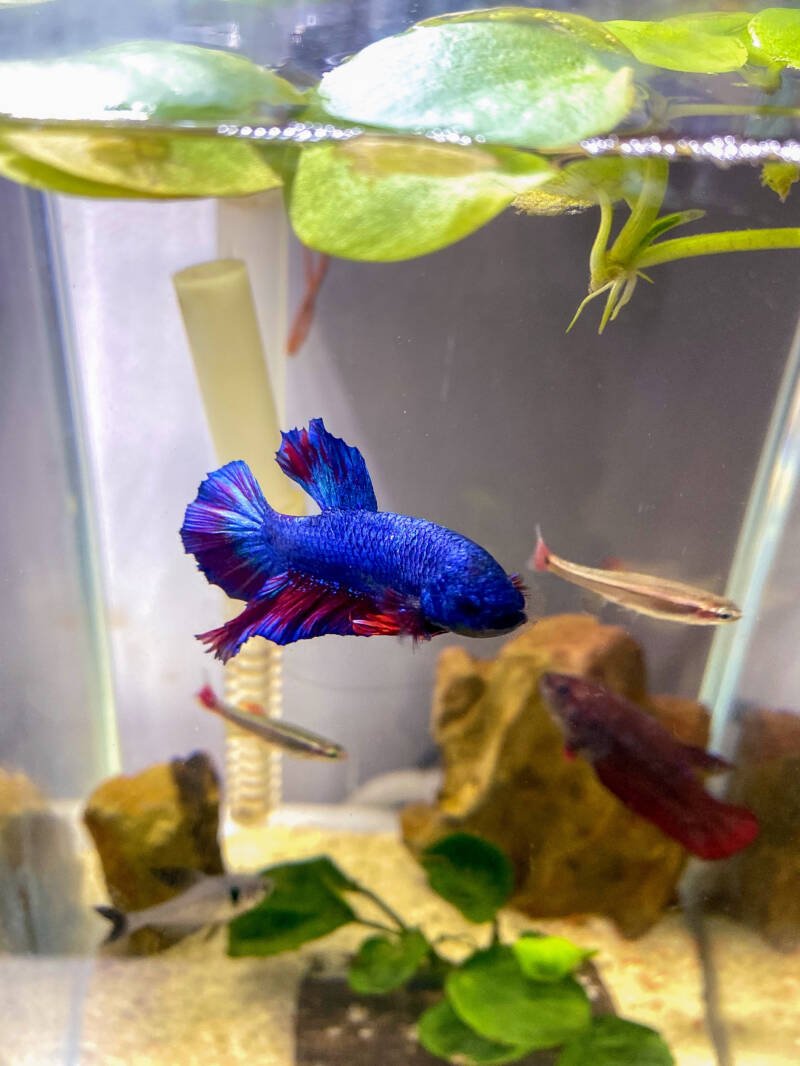 If you find that your betta and guppies are not getting along, there are many other species with which you can pair them, including: 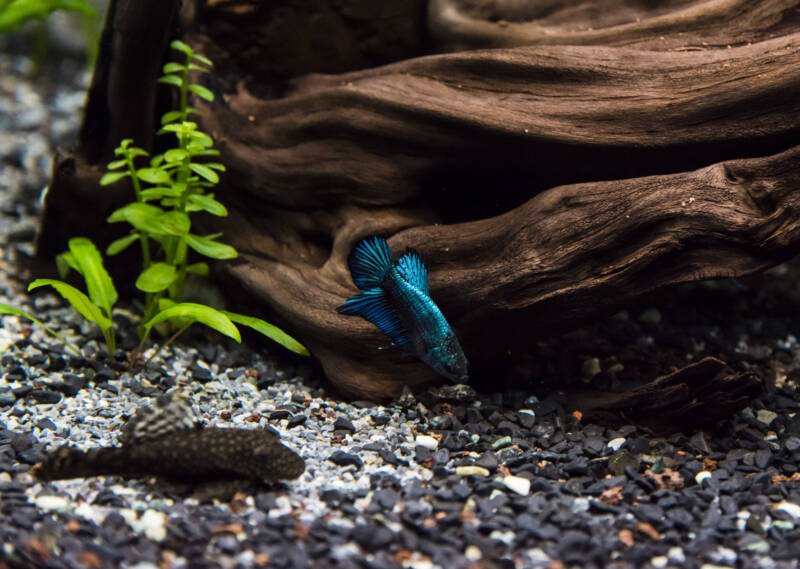 While guppies and bettas can live together, much depends on the temperament of your betta.

Start with a large tank, decorate it appropriately, and have the perfect water conditions and food.

Remember that ideal pairing can also depend on the sex and coloration of the fish. Be prepared with a backup plan should your fish not take to being tank mates.

Tell us about your guppy/betta tanks!

How do you minimize the chance for aggression?