The short answer is clownfish are purely saltwater fish.

While there are numerous species with “clown” in their name, the ones we typically recognize as “clownfish,” those made popular by the Disney movie Finding Nemo, come from the Pomacentridae family. These fish are all marine, and therefore saltwater, fish. 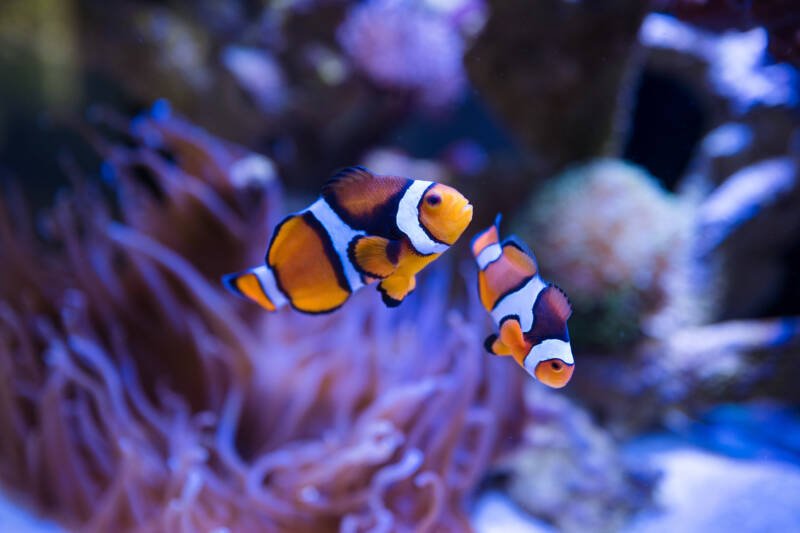 More Than One Type of Clownfish

Within the Pomacentridae family, there are 30 distinct species of clownfish.

The one we all know as Nemo is an ocellaris clownfish (Amphiprion ocellaris). This species is an enduring, popular favorite among those who keep saltwater aquariums.

Their range extends through the Philippines to the northwestern coast of Australia.

These fish are reef-safe species that do best in an environment featuring plenty of hiding places. They prefer shallow coral reefs and lagoons that are rich in life.

You may have seen pictures of these fish nestled among large sea anemones. These two species have a special relationship, which we will discuss later.

Can You Acclimate a Clownfish to a Freshwater Tank?

No. Clownfish are purely marine fish. If you place them in a freshwater tank, it will kill them.

This is because their regulatory systems, specifically their kidneys, gills, and intestines, are adapted to saltwater environments.

A saltwater fish, such as the clownfish, has a higher concentration of salty water in their cells.

What does that mean for the clownfish? At the cellular level, water will continue to flow into their body. As their systems are not adapted to handle this inflow, the cells will expand, burst, and die, leading to the death of the fish.

A saltwater fish placed into fresh water can die anywhere within 30 seconds to 10 minutes of exposure.

What About Brackish Water?

No. A clownfish cannot survive in brackish water.

There are many species that are considered euryhaline fish, which are fish that can survive in such conditions. These species, for one reason or another, traverse and tolerate saltwater, brackish, and freshwater environments.

One famous example is the salmon, which leaves its ocean environment and travels up freshwater streams to spawn.

Other euryhaline species inhabit brackish estuaries and tide pools. These waters have widely shifting levels of salinity, and the organisms that live there are adapted to tolerate these levels.

Unfortunately, the clownfish is not adapted to brackish conditions, and keeping them in such an aquarium would be detrimental to their health.

How do you set up a home aquarium for a clownfish?

Start with a tank size of at least 20 gallons. Add 10 gallons for each additional clownfish you keep.

If you plan to keep an anemone as well, you will need at least a 50-gallon tank.

Set the water parameters as follows:

Invest in a salinity monitor, thermometer, heater, and water testing kit to keep conditions within the appropriate range.

While a moderate water flow is best, make sure it is not overly strong as clownfish are not strong swimmers.

They spend most of their time in and around their anemone or selected hiding space. When they do venture out, you may notice their odd, jerky manner of swimming.

LPS and SPS corals or rock formations are also excellent additions for a clownfish tank if keeping an anemone is not an option. 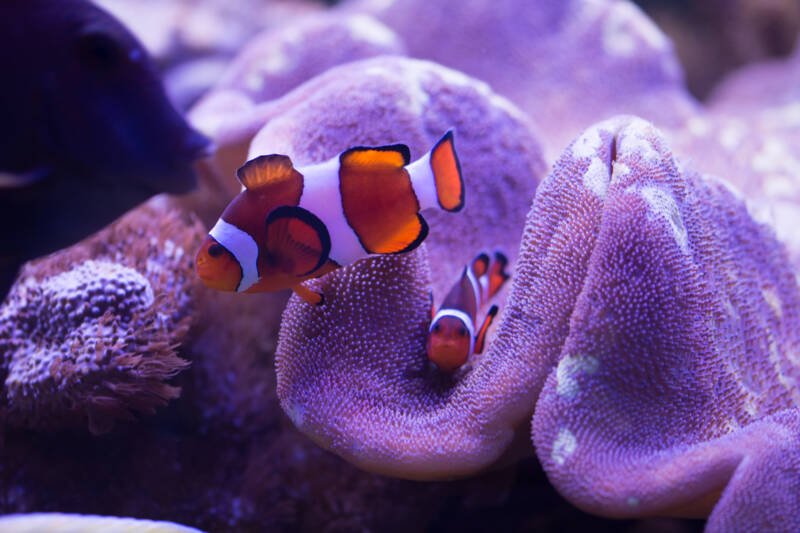 In the wild, these two species form a symbiotic relationship where each species benefits.

Clownfish are able to live among the deadly stinging tentacles of the anemone due to a protective mucus coating over their skin. In turn, the tentacles provide shelter and protection for the fish.

The brightly colored clownfish attracts larger fish, which the anemone stings and eats. The clownfish cleans up the leftover food and eats any parasites that infect the anemone.

By moving through the tentacles, the clownfish increases the oxygen supply to them.

In addition, the clownfish will fiercely defend their anemone against predators.

While this relationship is ideal in the wild, it is not necessary in a home aquarium.

The clownfish can adapt to a variety of hiding places as territory. Anemones can be a challenge for new aquarists due to their lighting and feeding needs.

If you are up to the challenge, there are several anemone species that work nicely with clownfish, including the following:

The above species will pair with the ocellaris clownfish.

Check with your provider to ensure compatibility of the anemone you select with your clownfish species. Not all clownfish pair with every anemone.

If you are not yet comfortable with the idea of keeping a saltwater tank, you can duplicate, to some extent, the color scheme with freshwater fish.

While none of the following are exactly a freshwater clownfish look alike, they do have similar colors and patterns: 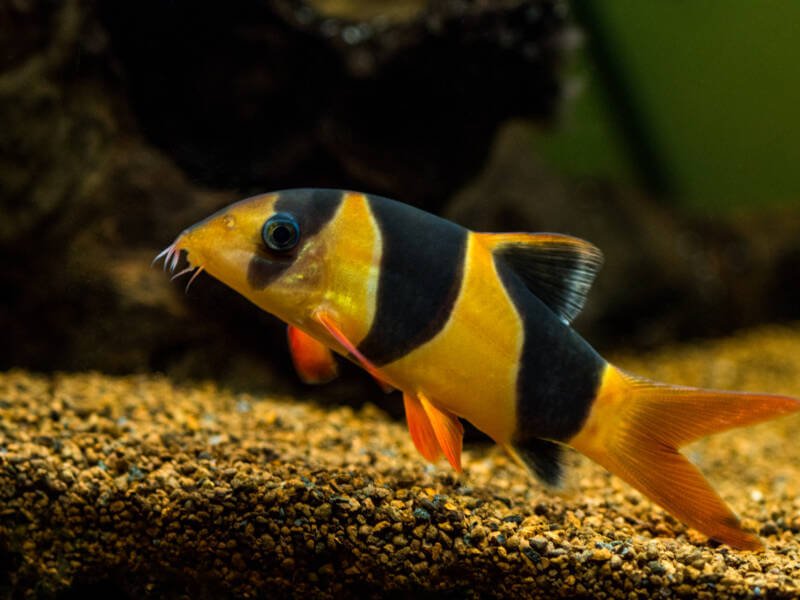 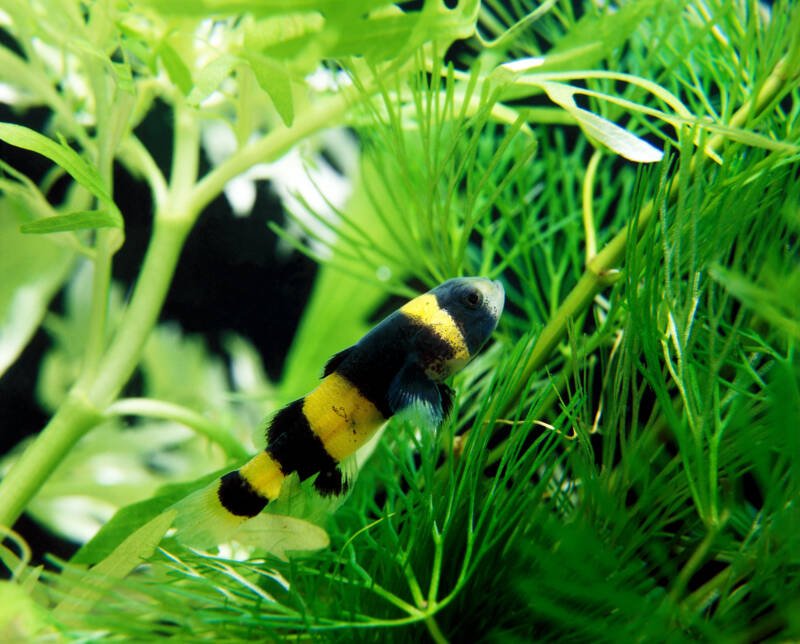 Bumblebee gobies have the striped pattern that makes clownfish so popular; however, they are not as brightly colored. Their yellow-black stripes are beautiful and can give a reef fish appearance in a freshwater tank. 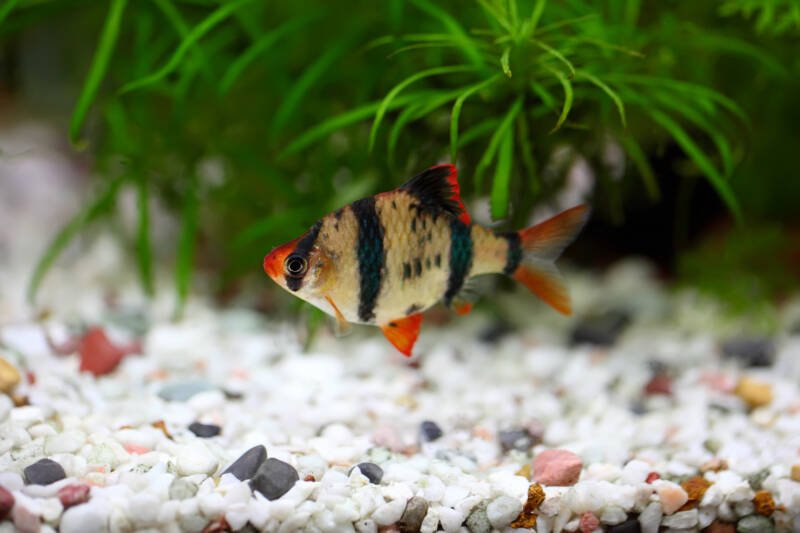 Next up are tiger barbs. As the name suggests, they have prominent black stripes and orange color on their body and fins. You will need to keep a group of these fish and avoid housing them with any slow swimming or long-finned species. 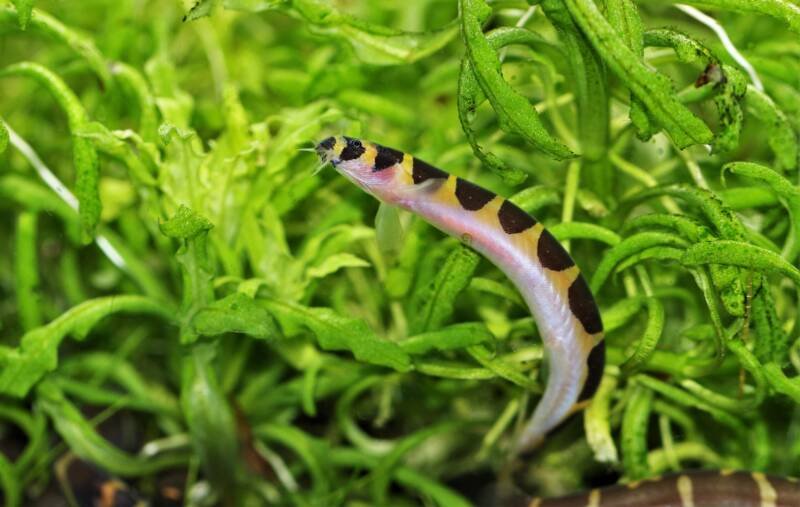 Your best bet for an orange/black striped pattern is the kuhli loach.

Be aware, however, that these peaceful bottom dwellers can grow quite large, up to a foot (30 cm) in length. They also need to be kept in a group of at least five, so you are looking at a significant investment in tank size. 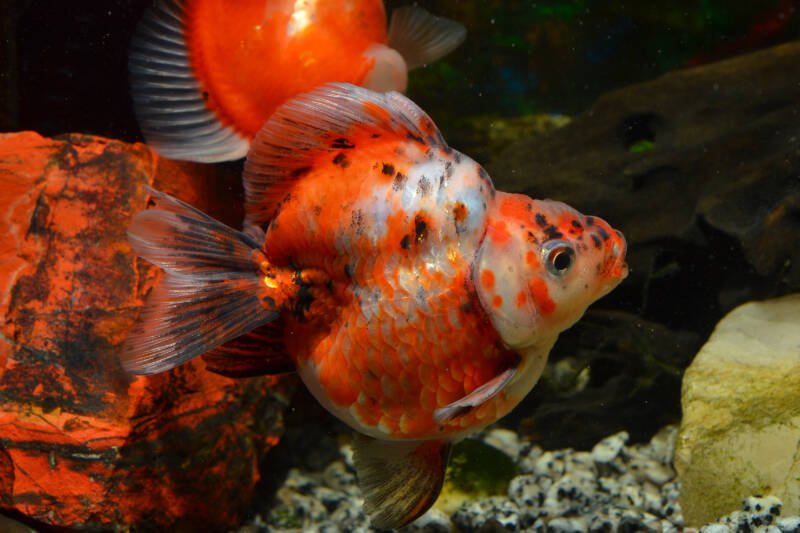 Although goldfish do not develop the stripes of clownfish, they come in beautiful, dappled colors, including orange, black, and white, similar to the coloration of some koi fish. These fish can grow large, so plan on a good-sized tank. 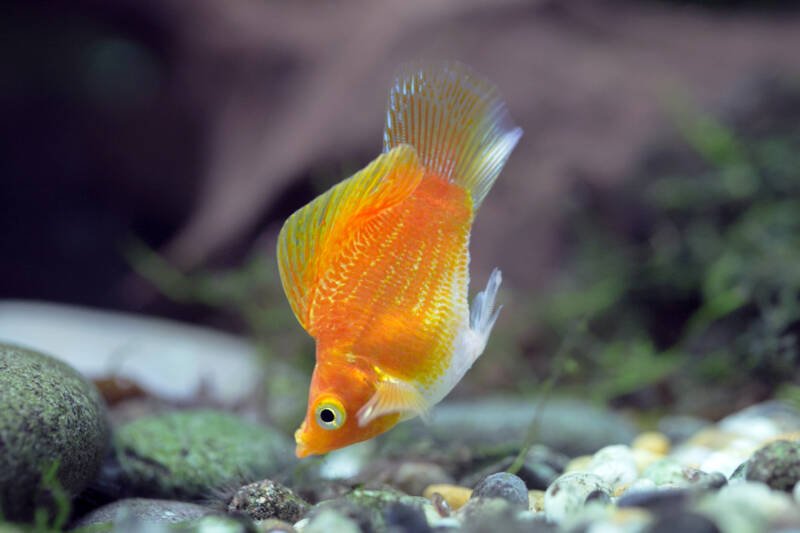 Mollies are another species that can bring a vivid orange color to your freshwater tank. You may have to search around for an orange variation, but their temperament and hardy nature are worth the search. 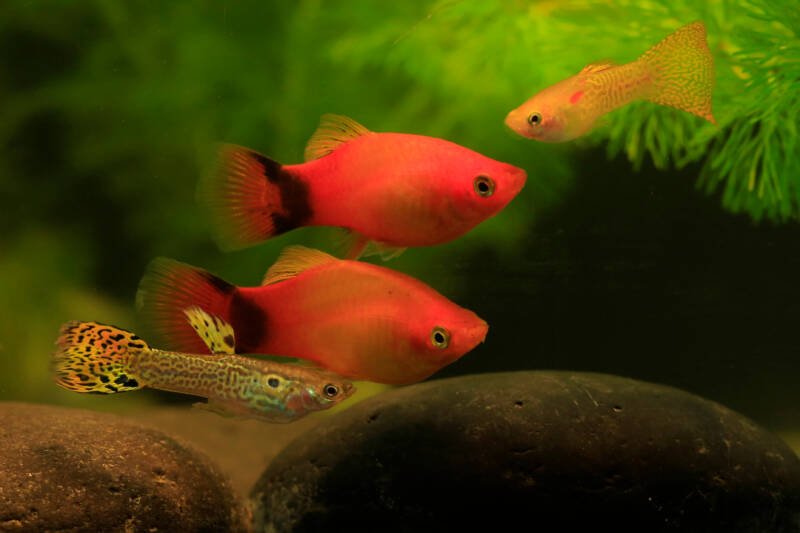 For a smaller tank, consider platies. These super hardy fish are an excellent choice for beginners and come in a range of bright colors. While you will not get the striped look of clownfish, you can get the orange coloration.

These fish absolutely will not survive in a freshwater environment and should only be considered if you are willing to maintain a saltwater or reef tank.

For those aquarists looking to recreate that look in a freshwater tank, there are several freshwater species to consider.

Drop us a message! Do you have any questions that we have not answered?