The Electric Blue Hap is a fish that can be found in the great Lake Malawi. The lake itself is one of Africa’s Great Lakes.

It covers a huge area around 29,600 km2 making it the ninth largest lake in the world. The lake is said to be home to around 800 species of cichlid, probably more, with around 300 identified species (so far) being exclusive to the lake.

The lake is situated in an area filled with mountains and so large falling boulders have been a common occurrence over thousands of years, filling most of the lake with large rounded rocks.

This, in turn, makes the water very hard with a high pH of between 7.0 and 8.0 (replicate this inside your aquariums). Most plants find it difficult to thrive in these sorts of conditions.

When referring to Malawi Cichlids many people categorize them within 2 types of names Mbuna (rock dwelling, flat faced cichlids) and Haps (everything that isn’t Mbuna). 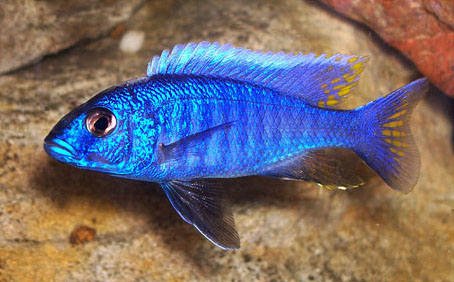 The Simple Care of Hap Ahli

First of all, I just think it is only fair to mention that this is a beautiful looking fish, with the electric blue being the dominant color across the fish.  They will be a gem in any aquarium large enough for them.

​How to keep them is disputed among aquarists as some claims that they are best in groups of one male to three or four females to prevent breeding stress - it is plausible -, with other aquarists saying they are best in breeding pairs, I’m more fond of the latter.

But the one common thought is to only keep one male because he will kill another male, if present.

The setup should reflect the Great Lake itself, with large boulder like rocks and next to no wood and only the hardiest of plants like and java fern - yes, they’re not native, but they work!

While this species isn’t a rock-dwelling cichlid, they still will appreciate some home comforts of the rockwork.

As with any fish ensure your tank falls between all of these parameters a few weeks before or during the whole cycling of the aquarium prior to getting your fish.

In the UK you will find a good pair of these fish as adults - a good pair being from a good store that uses only the best suppliers - around the £60-£70 mark, anything cheaper is probably sourced much cheaper than this and should, therefore, be avoided.

As mentioned above, the rocks should be large boulder type rocks preferably grayish or beige in color.  Before adding the rocks in however you need to make sure of a few things.

Firstly, is the ground in which your tank is on a good solid floor, without imperfections and can it take the weight of the water and rocks? Secondly, you need to place a good layer of a fine substrate, then a medium grade substrate in order to disperse the weight of the rocks evenly.

That's because direct contact with the glass could result in cracks and eventually a very wet floor and broken tank.

The other option, however, is the fake 3D backgrounds of rockwork. They can be slightly more expensive but still looks beautiful. They aren't often seen in many pet stores but they can be ordered in very easily, as most if not all suppliers to the pet trade will sell them.

I have seen some people using coral type rock, typically found in coastal areas. This will aid in buffering your pH but is usually quite sharp, make sure you weigh up the risks before buying this style of rock.

This section shouldn’t be too difficult as bogwood shouldn’t really be used.

However, the aesthetic appeal of it far outweighs the cichlid's lack of liking to bogwood, as they’re really quite impartial to it and don’t mind if it is there or not.

Try to use single larger pieces rather than just lots of small ones, as it will more naturally reflect a piece of large branch or tree that has fallen in and caught itself on the tide.

If so far you have followed my guidelines then the substrate sections shouldn’t be much of an issue as its rarely seen over the rocks.

As anyone knows with cichlids, they make a mess!

I would definitely go for a good branded external filter to cope with all the mess and sediment that can get trapped in your filtration.

Any large good quality external will do, try using a brand like Eheim or Fluval.

The heater to be used should be the same as any heater designed for large destructive fish or large rocks.

My usual product to go to is the Fluval E series, a heater with an outer plastic casing, an LCD screen displaying the current temperature of the tank along with flashing alerts when it's above or below what you have set.

Of course, any good brand glass heater with a heater guard is also an acceptable suggestion.

This is an optional extra, as external filters don’t tend to offer much in terms of water flow and circulation or water. Combined with the fact that the Lake Malawi is so large it has its own tide and is prone to tidal changes.

This is why I wholeheartedly think that wavemakers are a good idea.

The best staple food to feed your cichlids on is a well-branded cichlid food, try Ocean Nutrition Cichlid Pellets. Unlike flakes they won't make such a mess and feeding is much easier to monitor.

When it comes to frozen food it is easy to purchase a pre-made cichlid mix. Yes, they are tailored by professionals so they are an easy go to. However, they will eat most other foods too.

Be careful when choosing bloodworm, though, it has been linked to bloating in cichlids, this is very uncommon but something that is easily avoided by not using the food instead. So bare that in mind.

When the two are placed together it becomes glaringly obvious.

The Electric Blue Hap is an easy fish to breed, they usually breed when the water is of top quality, so they usually spawn not long after water changes or in a perfectly established aquarium, usually for just a few months of the year, around September.